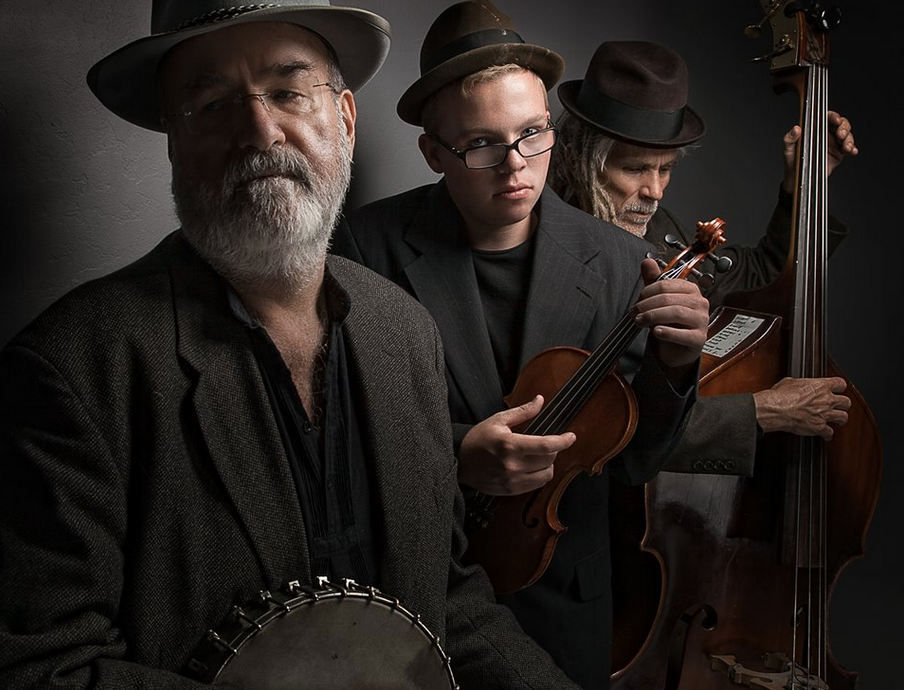 Ask Hal Cannon how his current group, 3hattrio (three hat trio), came to be, and you’ll hear him ascribe it mostly to chance.

“I’ve been friends with Eli [Wrankle]’s parents for a long time. At one point when Eli was still in high school, he performed at a concert to help raise funds for his high school band to go to Disneyland. Afterward, [Greg Istock and I] stayed behind and played our instruments along with Eli on violin.”

The impromptu jam session included a lot of improvisation, something Eli hadn’t experienced at that point. “After the evening ended, he asked when we could do it again,” Cannon continues. “Sometimes people move beyond age and circumstance when they perform together. The three of us really seemed to click—Eli at [then] age 17, Greg in dreadlocks down his back, and me as a cowboy poet/musician.”

It only took a few subsequent jam sessions before the group began to play locally throughout southern Utah, first in area cafés, and eventually in folk festivals and other, larger venues. Then came the group’s first album, appropriately titled Year One.

It wasn’t “year one” for Cannon, however, who has worn many hats, most of them wide brimmed, and won numerous awards, both local and national, in his long and varied career in stories and music. During 1972-2002 he researched and recorded 19th-century Western music with his Deseret String Band (touring widely here and in Europe and performing at the 1998 Nagano Olympics). He was the founding Folk Arts Coordinator for the Utah Arts Council from 1976 through 1985. He also is founding director of the Western Folklife Center in Elko, Nevada, and its offshoot, the popular Cowboy Poetry Gathering. He has published numerous books and recordings on the folk arts of the West including the best-selling anthology Cowboy Poetry, A Gathering; has produced, with Taki Telondis, numerous NPR radio features (including one on the Wright Brothers) and the Emmy-winning television program “Red Rock Rondo, A Zion Canyon Song;” and with Mary Beth Kirchner, he produced the six-part series “Voices of the West” (the “A Cowboy Christmas” episode won a bronze medal at the New York International Radio Festival).

As to his current musical leanings, Cannon is reflective. “My music is different now—and probably hard for some people to define. My band calls it desert music, because our music is influenced by the desert in which we live, close by Zion’s National Park. But some producers and reviewers don’t know what musical genre we are. I guess that’s what happens when you take a risk and create something new.”

Cannon and the band are in Salt Lake City this week, for a release party and signing of their second CD at Ken Sanders Rare Books. They are also getting ready for the upcoming collaboration with Repertory Dance Theatre, for their Revel concert, Nov. 19-21. The band will be performing during a dance created by renowned RDT dance alum, Bill Evans, with whom Cannon has worked before. “There’s something special about performing live music with dancers,” he muses. “Something always happens in the performance—something totally different from how dancers perform to a recording. It’s magical.”

Cannon first worked with Evans in 1973, and confesses that when he recently  played ”Crippled Up Blues” for Bill (off 3hattrio’s second album), “we both laughed at the appropriate title, and the fact that enough time had gone by since our first collaboration to make us both feel old and a little crippled! I wrote that song when I was feeling sorry for myself after knee surgery, but then I thought I’d share it with Bill. He loved it. So we thought it was an appropriate choice for RDT’s 50th anniversary performance.”

While some might think it odd to pair banjos, string bass, foot percussion, and folk-like lyrics with a modern dance troupe’s choreography, to Hal Cannon the juxtaposition is already familiar. “Our current band is new, but it’s already my second collaboration with RDT.”

And of course, modern dance is no stranger to innovation and unusual musical pairings. “Our music is influenced by a lot of things,” says Cannon. “For example, one of the pieces we’ll perform, ‘Wind,’ literally came about when I couldn’t think of a melody, so I went out into the foothills where the wind was blowing. I started singing along with the melody of the wind, and that worked itself into the song.”

Cannon also admits that 3hattrio’s new album contains some darker songs. “In one, ‘Off the Map,’ we reference a tale of love and murder, and how the effects of that murder take the characters to a foreign territory—figuratively off the map—where they can’t escape from the consequences of their actions.” And then there’s the piece that came from Cannon’s experience in Downey, Idaho, where he spoke to an old man who said he no longer recognized his hometown because it had changed so much.

Cannon enthuses about RDT’s choreography to his (and fellow band member Greg’s) pieces. “It’s wonderful,” he says. “My wife [author Teresa Jordan] and I were in Salt Lake recently and observed a rehearsal. We can’t wait to come back and create an amazing experience onstage with the band. Even though some of our pieces [from the new album] are somewhat dark, people may be surprised at how lively we are onstage.”

It’s also clear that Hal Cannon’s music resonates with more than just American audiences. “Our new album is really climbing the charts in Europe right now,” he says. “I just heard one of our pieces online, broadcast in Dublin. We’re also on playlists in France, Holland, and other areas in Europe.”

When asked to account for the current appeal of his music in Europe, he modestly demurs, but seems to accept that truly American genres (e.g., jazz, African-American spirituals, folk, bluegrass, and others) often have been wildly popular in Europe. Could it be that European audiences are drawn to the magic of a land quite different from their own, and a music that corresponds to that landscape? Cannon may be too practical to speculate, but the scenario seems plausible enough.

Perhaps it’s fitting that 3hattrio’s latest CD was recorded in bassist Greg Istock’s art studio in Virgin, Utah. Desert music, after all, is nothing without a desert. And 3hattrio is all about desert music—and art.