Drag out your tie-dyes and sandals and head to Park City’s Egyptian Theatre to experience “Hair: The American Tribal Love-Rock Musical.” Be aware that it features full-frontal nudity (some on opening night apparently were not — despite disclaimers practically everywhere — since they walked out in a huff) and anyone under 18 must be accompanied by an adult guardian.

Caveats given, Jerry Rapier has directed a dazzling show, his eighth for the Egyptian after 15 as producing director for Plan-B Theatre at the Rose Wagner in Salt Lake City. Every bit of his experience shows, from the use of the hot live onstage band that accompanies the Tribe of hippies to the careful casting of every role. There are nearly a dozen dancers on the small stage and each does his or her complicated bit to create a marvelous whole. The ensemble work is terrific as this Tribe of friends sings out against war and repression and for peace, love and freedom.

The show opens with the familiar “Aquarius” sung by the woman with the big hair and big, show-stopping voice, Kandyce Marie Gabrielsen, who weaves her magic throughout the show. Berger, played cockily by Seth Barney, leads the Tribe through “Donna” and
“Hashish” before Woof, who David Holmes makes funny and charming, launches into “Sodomy.”

Another caveat: The Tribe engages in plenty of same-sex kissing and fondling. Rapier says the playwrights intended the sexuality to be fluid: “In the world of the play there’s supposed to be a sense that all the Tribe members are open to whatever relationship/experience comes their way without consideration of gender.”

For the director, however, “the more powerful commentary in the script is the
addressing of racial stereotypes since the show was literally created at the same time the Civil Rights Act was passed.” Hud, played powerfully yet playfully by Timothy Letheic Goins, sings of being a “Colored Spade.” And the white girls in the show desire only “Black Boys” while the reverse is true of the black girls.

However, the story centers on Claude, played superbly by Fred Sherman Lee, who sells cars and teaches ballroom dance in real life when he isn’t the star of the show at the Egyptian.

Claude has just been called up by the draft board and he’s into peace and love and doesn’t want to go. Yet he seems reluctant to burn his draft card. He sings many of the familiar songs, the catchy “Manchester, England” which becomes his theme song (“I believe in God and I believe that God believes in Claude and that’s me”); “Hair” in a terrific duet with Berger; “Where Do I Go?”; “Ain’t Got No Grass”; and “The Flesh Failures/Let the Sunshine In” which ends the show.

There are too many cast notables to mention here, everyone shines, but Nathan Shaw as Margaret Mead and Aquarian is screamingly funny and a wonderful singer/dancer(with a terrific body) while Lauren Noll’s plaintive Crissy singing about losing “Frank Mills” (who looks just like George Harrison) was a delight.

In the band, J.D. Dumas played keys, Alex Rowe played bass and Brad Wright was on guitar. They were under the direction of David Evanoff who was on drums. 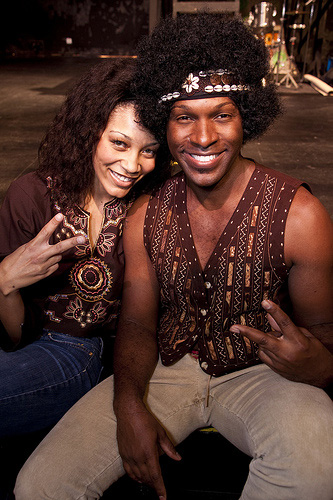 David Holmes was the choreographer; Heidi Calwell Ortega did the easy-to-step-out-of period costumes; set design was by Peter Mayhew; sound design by James Mayo and Billy Bommer Jr. was the sound engineer. Everyone left humming if not singing aloud.