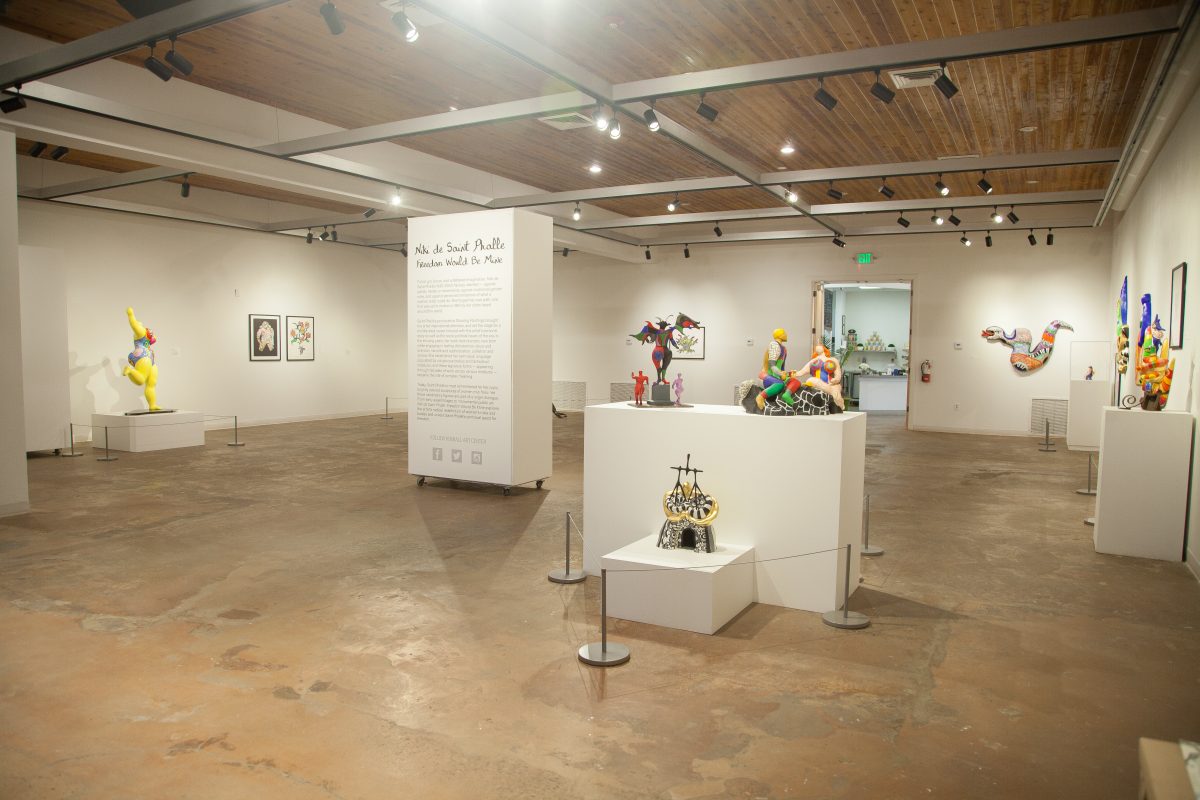 Freedom Would Be Mine at the Kimball Art Center celebrates the career of feminist art heroine Niki de Saint Phalle (1930-2002), whose earliest sociopolitical artwork preceded the 1970s flourish of feminist artists. Because she was an initial outlier to the feminist art movement typically associated with names like Judy Chicago and Miriam Schapiro, Saint Phalle is too often left out of scholarly research on the subject. This is something Kimball curator Nancy Stoaks has worked to change, ever since her enlightening first encounter with Saint Phalle’s work in an undergraduate art history course.

“I began recognizing that women artists had to fight for attention,” says Stoaks, who found Saint Phalle mentioned among very few female names in her studies on mid-20th century art. Fascinated by Saint Phalle’s experimental approach to art making, Stoaks conducted her own self-study on the rebellious artist whose Shooting Paintings eventually became the focus of her graduate thesis. “I really wanted to add to the conversation around her work; it was so captivating and ready for more scholarly attention.”

Organizing Freedom Would Be Mine, which features 30 artworks spanning 40 years, is one of the many contributions Stoaks has made to the current dialogue around Saint Phalle’s work. With more than 15 years of study and numerous lectures at conferences and museums including Tate Liverpool and Seattle Art Museum, Stoaks is dedicated to reinserting Saint Phalle into feminist art histories. “She embraced a playfulness that seemed at odds with the dominant feminist strategies,” explains Stoaks as another reason for Saint Phalle’s exclusions. “But her work and continued activism throughout her career is extremely relevant to histories of feminist art, particularly in terms of performance art and her exploration around women’s bodies.”

Those familiar with Saint Phalle generally connect her with these two realms because of two bodies of work: the Shooting Paintings and the Nana sculptures. For the Shooting Paintings, referred to by the artist as “creation through destruction,” Saint Phalle layered a thick coat of plaster over bags of paint, which she, or other participants, then shot with a .22-caliber rifle. Violent holes and subsequent spills of color tainted the pure white surfaces, which, as the series evolved, became elaborate assemblages that included images of political leaders, photos of herself, religious altars, erotic figures and more symbols of the times. These paintings or “happenings” were often filmed and created in front of a crowd with Saint Phalle as the shooter, dressed in a white jumpsuit that matched the initial chaste surface of the piece. “I dressed completely in white like a Vestal Virgin and massacred my own pictures,” she once stated. Produced mainly from 1960-63, these scandalous and violent acts appalled yet excited the press, bringing the artist international fame and a reputation as a women’s rights activist.

“Shooting Painting Nine Holes”offers the viewer a glimpse into the series, which ranged from smaller effigies to monumental works. In this 27” x 20” piece at the Kimball, we intimately encounter the brutality of Saint Phalle’s bullets from the concaving plaster and haunting paint drips left in their wake. Through this aggressive yet cathartic act, Saint Phalle not only confronted the violence and injustice of the time but also that of her own past. The artist spoke of her upbringing as restricted and confined; she had a troubled relationship with her parents that included sexual abuse from her father. In phasing out of the Shooting Paintings, Saint Phalle stated: “Suddenly the pain was past. I stood there and did figures of joy…Perhaps they simply came from everything I’d really had enough of.”

With goddess-like bodies brightly painted and patterned, the series of sculptures that followed were joyful yet provocative, becoming the object of controversial attention. “The Nanas were a celebration of female sexuality, and playfully disrupted ideals of beauty,” says Stoaks. “They were firmly situated within conversations around gender and power.” “Dawn (jaune) / Dawn (Yellow), ” a voluptuous female form that happily skips from her pedestal in a whimsical pose, is a stellar representation of the series.

The Nanas soon took on a bigger and more obtrusive form, represented in the exhibition through “Repainted Photo of Hon.” This enlarged, black and white and painted photograph shows the scale of Saint Phalle’s now destroyed sculpture, “HON – en katedral (SHE – a cathedral)” erected in the Moderna Museet in Stockholm in 1966. “HON” was a monumental Nana at 90 feet long. As depicted in the photograph, the brightly colored female form lies on her back with legs spread in a birthing position, which exposed an entryway that swallowed up its visitors. Inside the architectural sculpture was an installation that included a small cinema, aquarium, bar and exhibition of fake masterpieces. This was Saint Phalle’s first architectural Nana, which led her to more large-scale works.

Freedom Would Be Mine cohesively follows the arc of Saint Phalle’s career, through representations of her most memorable and radical artistic periods, yet also includes prints, drawings and other sculptures that flesh out her larger story. “With work from the early 1960s through the late 1990s, this collection of work shows the artist’s broader rebellion and the elaboration of her very unique visual language, which is full of voluptuous bodies and fantastical creatures as well as much darker representations of women,” says Stoaks.

An example of the latter is “La Promenade du Dimanche” (1971), a large-scale sculpture featuring an elderly couple strolling with a leashed spider. The female figure carries a bleak facial expression and is much larger than her male counterpart; the curvy sensuality of the Nana form is replaced with a sagging and warped body that verges on grotesque. Stoaks says of the piece: “The woman, like others in Saint Phalle’s works, is confined to mid-century societal expectations of marriage and motherhood. It is a powerful example of the way in which the artist continually took women’s bodies and women’s roles as her subject matter, pushing boundaries and continually striving for freedom from what was expected of her.” 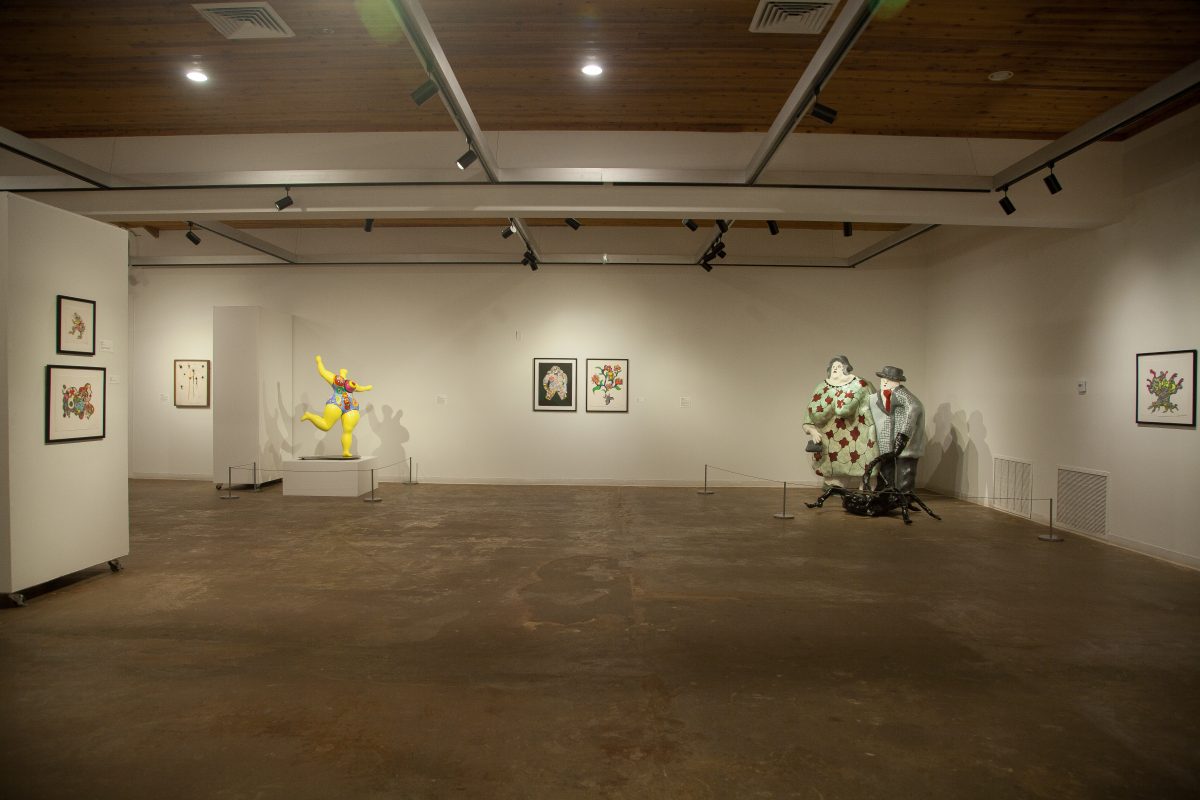 Other pieces include a series of models for Saint Phalle’s major public work, the Tarot Garden, which included more than 20 larger-than-life sculptures and took her 20 years to complete. While Saint Phalle felt a connection to Outsider Art due to her primitive and self-taught style, she was not without the support of the mainstream gallery world. In addition to her gallery sales, Saint Phalle creatively self-funded the Tarot Garden with her own perfume line and editioned projects. The Tarot Garden studies provide context to Kimball visitors on yet another important phase of Saint Phalle’s career while giving insight into the passion and commitment of the artist to her work and her cause.

Saint Phalle was a determined creator, performer and activist who forcefully and publicly opposed the many constraints women felt under a patriarchal culture. “Men’s roles give them a great deal more freedom, and I was resolved that freedom would be mine,” said Saint Phalle in a resonating statement that gave Stoaks the exhibit title. This sentiment also infuses her curatorial commentary, where she suggests questions Saint Phalle’s work poses: How much, and how little, has changed in 60 years in relation to representations and realities of femininity, sexuality, and power? How, where and when do women assume power in today’s world and what happens when they do?

Maybe the final question for us to consider is, how can we collectively continue the conversation that Saint Phalle started, and where does it end? Freedom Would Be Mine encourages us to come up with answers.