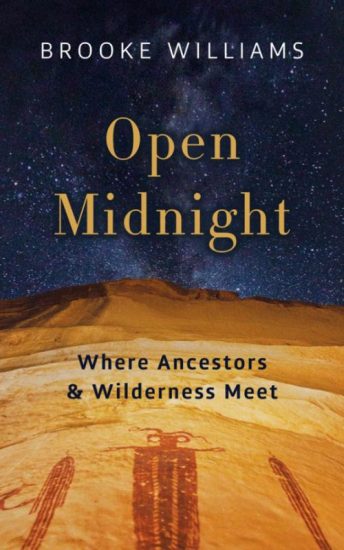 Just a day before I picked up Brooke Williams’ latest book, the nonfiction Open Midnight:Where Ancestors and Wilderness Meet (Trinity University Press), my wife, Chautel, and I had just returned from a long weekend spent in Boulder, Utah. We stayed at the lodge and made daily hikes into the Escalante Staircase National Monument. We followed trails miles back into the wild places where our companions were lizards, range cattle, crow, and a blue heron. We came across a fresh footprint in the wash sand that looked like a mountain lion paw. The only humans we encountered were a man and a woman with a couple of young teenage boys and a dog that had no eyes.

I thought about that dog as we hiked past them and on over the sandstone to a beautiful vista back where Deer Creek carved itself so tight into the canyon that we could go no farther without all-in commitment and gear, both of which we did not possess that day. What must it be like to step into this wilderness without benefit of sight? Sight was the sense I most relied on out there. But I am human. What does a dog feel in the wilderness? I like to think it feels some sense of being, of some animal truth.

Three things that I want do after reading Open Midnight:

Open Midnight is in equal parts a man’s struggle to preserve wilderness, a ghost story, and a love story. Brooke Williams is employed in a task to doggedly dead end every route marked on a map of thousands upon thousands of acres in southern Utah in support of federally declared wilderness designation. He covers the desert in his Ford with his African Basenji dog, Rio, and William Williams.

William Williams died in 1863 migrating across the Plains with the Rosel Hyde Mormon pioneer company. This is indisputable. Also indisputable, at least to Brooke Williams, is that in one form or another his dead ancestor influences him, but only when he is open to the signals. Most often he finds signals in “thin places”:

Wilderness became places on the earth where the veneer was absent, or at least thin enough to move through. Wilderness areas became thin places for me, with minimal distance between the spiritual and the secular, the past and the present, heaven and earth.

Thin places. This is the love story.

Williams takes the reader into the wilderness, down washes, over desert, looking for recent signs of human passage. What he is hoping to find is no one and no evidence of modern man’s movement over the land. “Solitude, I believe is the connective tissue between the outer wilderness and our inner wildness, where clues to our long-term survival have always been found.”

Thin places as wide as the senses can imagine.

I don’t know if Chautel felt that thin place out on Deer Creek when we saw the cougar track. I know I did. Hiking back out while we were scanning the cliff walls for petroglyphs, Chautel said, “Why do I feel like we’re being watched?” Yeah. She felt it.

Whenever I encounter rock art, I feel time shrink. I feel the distance between the past and the present disappearing. Time thins out. For me, rock art sites are thin places. All wild places may be thin places.

Yes. I hope I’m not the only one who might stand humbled before a hidden rock-art panel behind some cedar or tamarisk and put myself in the footsteps of an ancestor and feel the hum, the impetus of the mind that guided the hand to etch this. It is a form of time travel for me. Williams says, “I’ve spent hundreds of hours watching rock art.” One does not “watch” art without there being movement, even if it is the slow shudder frame of time passing. Era to era.

Brooke Williams’ guide, William Williams, grew up in Shrewsbury, England, at exactly the same time Charles Darwin grew up in Shrewsbury, England. Brooke Williams imagines the encounters his ancestor and Darwin may have had. The chance encounter along a river where the boys pester beetles and scrutinize footprints in the shore sand. Williams, the author, makes no bones that he is conjuring narrative from the past; that he knows no fact other than the two men shared the same ground and time. Is it not plausible then that William Williams and Darwin may have chanced upon each other? For me, these imagined encounters are some of the most honest parts of the book, because they are innocent. They are not marred by debate, by polarized opinion, by social media. They are imagined like the way a worldview most perfect might be.

Charles whispered something William could not hear.

The boy whispered louder. “Over there. Quiet.”

William rose slowly to see above the blind. Across the river a tall gray bird moved slowly into view, its yellow beak aimed down toward the river. The two boys watched silently until the bird stood up straight, took three hard wingbeats, and was airborne down the river.

Like the blue heron I saw taking to the air out in the choking slot canyon of Deer Creek, its wingtips fairly brushing both sides of the sandstone walls. Gone.

“Did you see that heron?” I asked Chautel.

She shook her head, but she knew it was there.

Anything is possible far enough from the road.

At night while we were in Boulder, Chautel and I stepped out from our warm lodge room and looked up into the sky. Stars. Stars so vast, layered upon each other in a strange coherent texture, like some braille that a blind man might put his fingers against to learn the truth of existence. Or an eyeless dog putting paw to heaven and then back to ground.

In Open Midnight Brooke Williams exists on the land. His job is filled with topography maps, with GPS, and gated fences, grainy satellite photos, the Great Old Broads for Wilderness, and a high-horse sitting gently-spurred County Commissioner. His job and passion is an oppositional endeavor: “If wilderness can ‘save us,’ could I convince its most ardent detractors?”

This is where it hangs. Isn’t it?

This is an important book that poetically but firmly leans towards wilderness. A book that makes a case that, “To many, there is neither context nor mystery, only disdain for a people who might still believe in something as simple as the meaning to be gained from a stone.”

And it is in the stone that Williams helps us to find story. All of us. If we can’t find ground-truth, most of us will be little more than rocks.

The modern world cannot afford to have anyone listening to stones.

Without those stories, those stones would be rocks. A stone, then, is a rock with a story.

Chautel and I ordered a couple of those ancestry DNA kits a few days ago. I hope this will help me find my own spirit guide. We spit in the tubes and sealed everything up and posted them. In six to eight weeks, we’ll know our separate and shared ancestry. I know (think) most of my blood is from the United Kingdom. As with Brooke Williams’ ancestors mine immigrated to the United States, ultimately to Utah, to help build the Kingdom of Zion. A Spiritual Manifest Destiny. I hope there is a shred of Native American in my blood, just enough to make better sense why I lick the redrock whenever I travel to southern Utah.

I had a conversation with my older brother a few weeks ago. We were discussing the spiritual found in nature, and in particular on the mountain we grew up next to. Dry Mountain. Williams puts a word to these wild spaces where consciousness rubs up against the mystery, against faith, our past and our future. He calls it a thinness. My brother and I—linked through our genes, common parents, and place—we have felt “ground-truth” up there in the rocks, in the stones we’ve overturned and stacked and rolled.

Though Dry Mountain is distant from any wilderness or monument and far from ever being considered for either of those designations, it is a sacred place for me, for my brother. For countless others. It is sacred like the sandy wash leading into the narrow lay where a blue heron resides safe on Deer Creek in the Escalante Staircase National Monument. Or the ground near Cedar Mesa on the new Bears Ears National Monument where a shred of pottery untouched might remain for a millennia. Untouched.

My recent travels and life experience collide with this book. My hope is that it will touch many more, chiefly those on the ridgeline who, at first, look out over the desert wondering at what might ooze up in oil or natural gas in trickling dollars, but then blink, feel the spirit brush the short hairs on the back of their necks and realign with the wild, with the potential in tapping into thin space. Falling heart-first into the earth.

With his gentle but direct writing of honest forthright appeal for wild places, Williams implores that “When the books are gone, open midnight.” 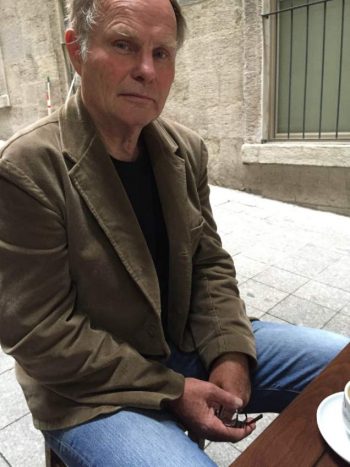 We’re taught to believe it is the dark world we enter in sleep when all the demons come alive. It is halfway between dusk and dawn, but also between where we’ve been and where we’re going. For me, midnight represents the unconscious, that huge place where all possibilities are hidden. Open it, and like a once-locked room in the back of your house, find everything you need. Walk in and become fully awake.