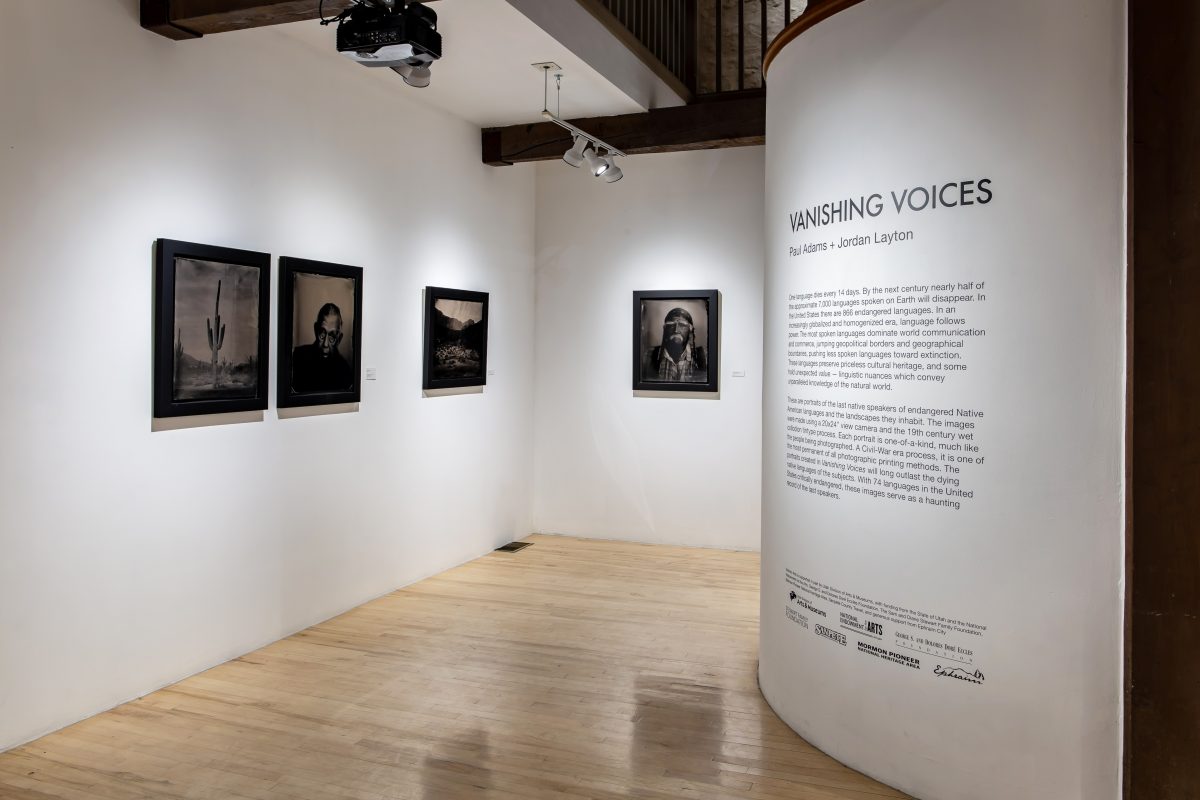 Yet one language dies every 14 days. Nearly half of the approximately 7,000 languages spoken on Earth today will disappear by the next century. In the United States there are 74 critically endangered languages, and an exhibition at Granary Arts in Ephraim presents striking portraiture that will long outlast the Native American languages of its subjects.

These indelible images serve as a record of the last speakers and the landscapes they inhabit, and of how “in an increasingly globalized and homogenized era, language follows power,” according to photographer Paul Adams, one of the creators of Vanishing Voices, hanging through Sept. 18. 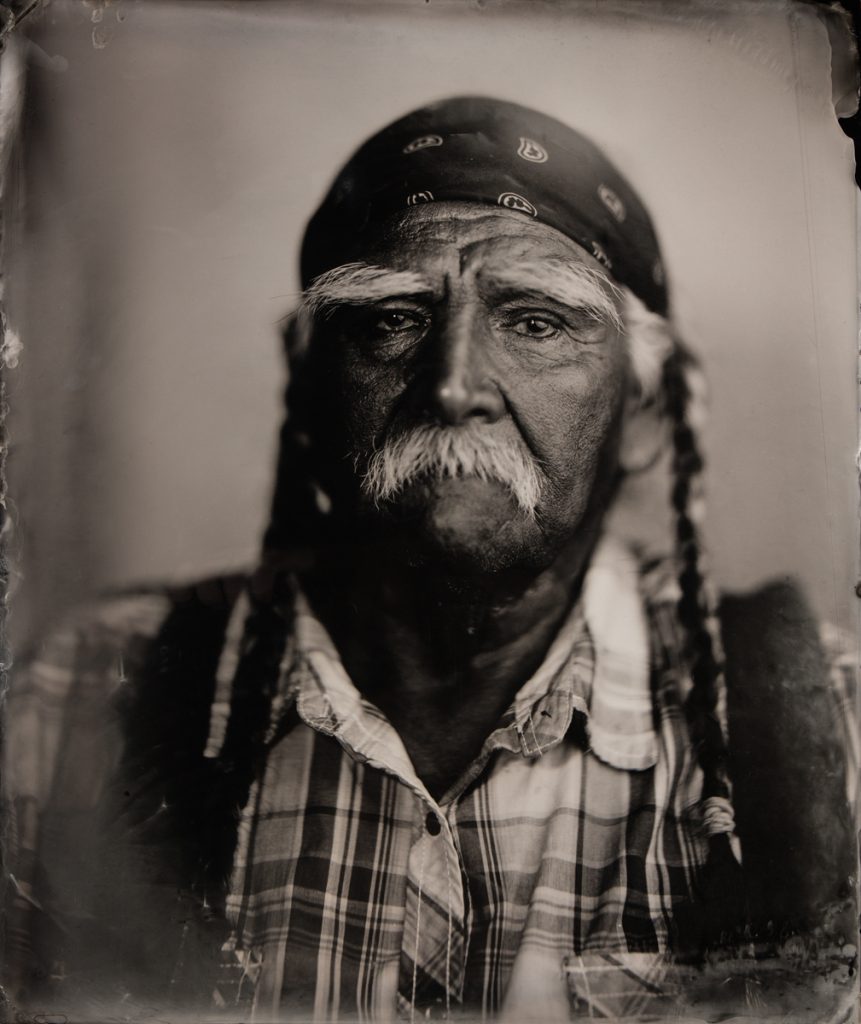 “Arvid, One of the Last Remaining Speakers of Hu’q’umi’num,” wet plate collodion, 2017

Adams, who teaches at Brigham Young University, credits his collaborator, Jordan Layton, with the concept for the exhibition. A student in need of a project in early 2017 (when this all began) Layton was born and raised in northern Alabama before receiving his BFA in Photography from BYU. He has since worked as a commercial photographer and art director in both New York City and Los Angeles where, he currently resides, and recalls in an email to 15 Bytes how he conceived of the idea for the project:

“I came across a website that listed the world’s endangered and soon to be extinct languages [and] was astonished that so many could be found in North America, a few almost right in my backyard. To overcome my own ignorance, I dug deeper and deeper and was fascinated by these languages and the people who spoke them. With many languages struggling for survival, I wanted to try and celebrate the people who were working so hard to keep their cultures and parts of the world alive,” Layton writes.

The photographer adds that, “The way we perceive the world is largely influenced by the language we use to describe it, so once a language is lost, so too is that unique world view.” 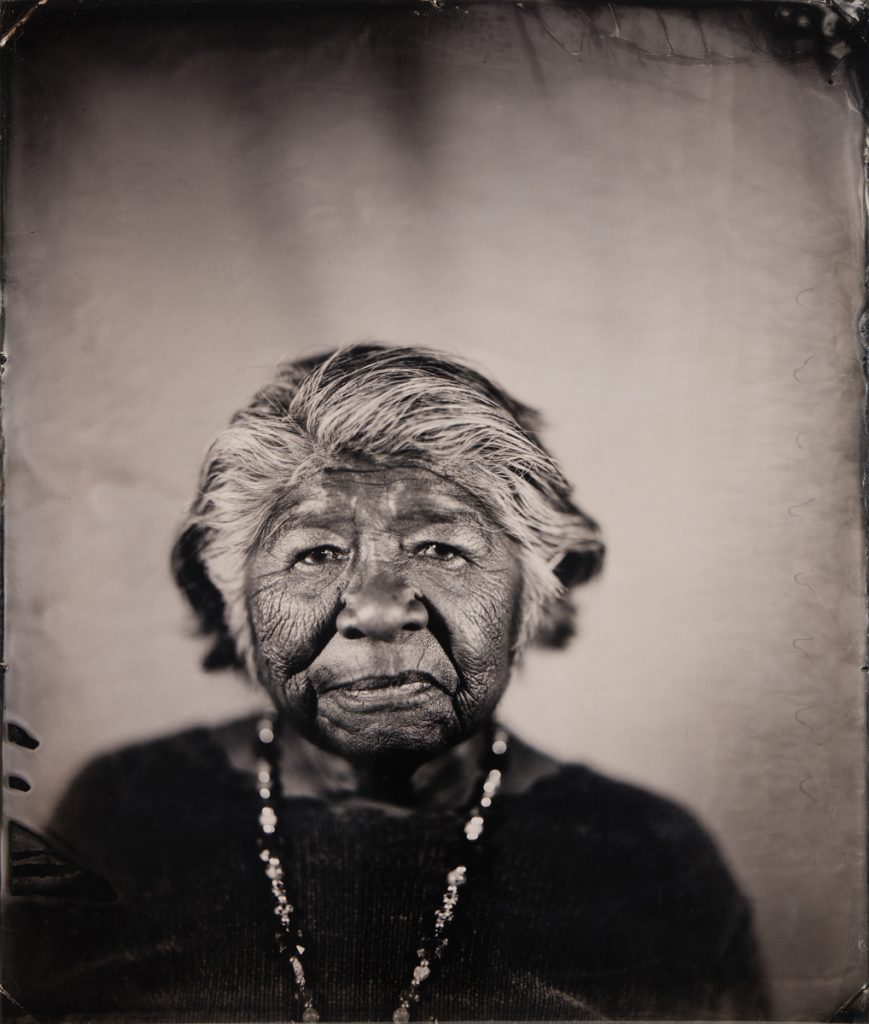 The logistics of such a project were boggling: Not only did they have to discover these Native speakers, but also decide how they would want to photograph them, convince naturally suspicious tribal elders that a couple of white guys from Utah had their hearts in the right place, and, not least of all, obtain funding for what was going to prove an incredibly expensive undertaking.

That expense arose in large part from their decision to utilize a photographic process from the Civil War era, one of the most permanent of all photographic printing methods: the 19 th-century wet collodion tintype process, incorporating a 20 x 24” view camera.

“We saw a connection with tintypes and ancestors and the history of Native Americans,” says Adams. “There is something magical about the process — the idea that the photograph is created in the camera, that the photograph has to be created in the same space as the person who is in the image. Each portrait is one-of-a-kind, much like the people being photographed. They are excruciatingly difficult to create,” the photographer adds. But worth the effort. The tintype portrait of “Florence Pestrikoff, One of the Remaining Speakers of Alutiiq” is hanging in the National Portrait Gallery at the Smithsonian in Washington, D.C. “That exhibition ends soon and will travel from there,” Layton writes from Los Angeles. 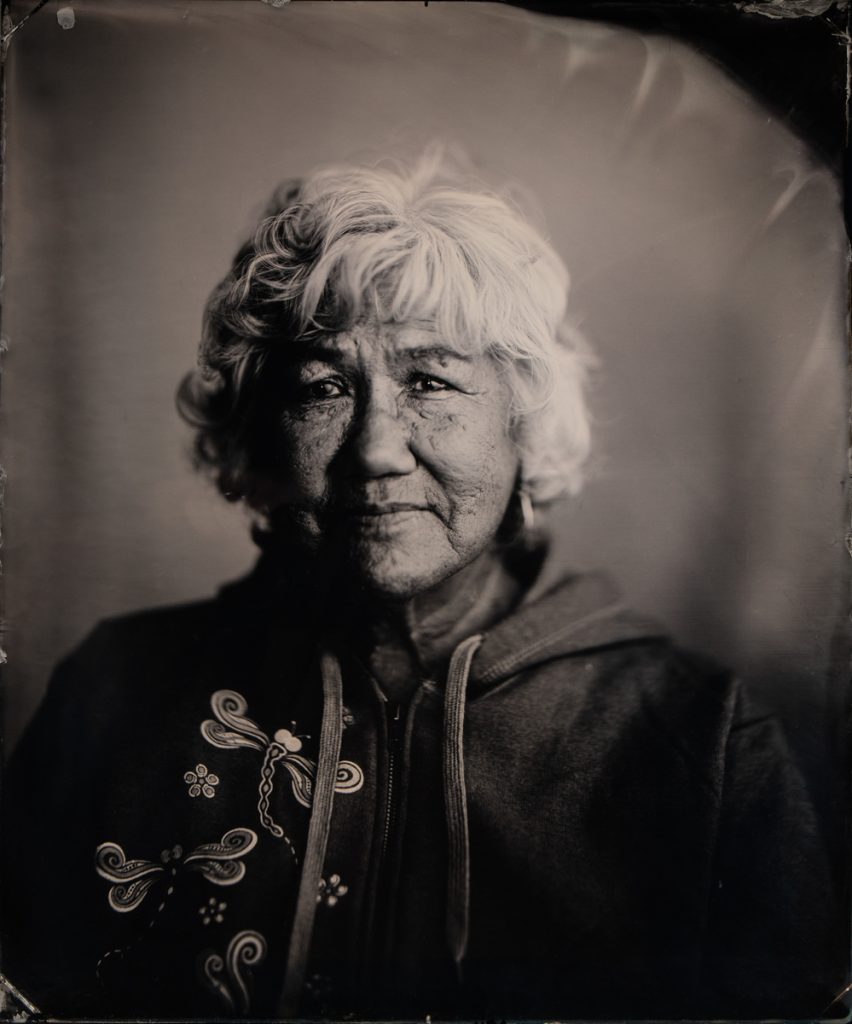 “Florence, One of the Last Remaining Speakers of Alutiq,” wet plate collodion, 2017

Adams was the person who obtained grants and other funding, built a portable darkroom, and got the truck which took them on multiple trips to numerous states in the Southwest during the past few years and on a drive from Utah to Kodiak, Alaska, which involved Adams taking a leave of absence from BYU. Layton was still a student on their first shoot in February 2017.

“It’s an ongoing project and we are still working on it but COVID has shut it down almost completely,” Adams laments. “Almost all the speakers are 80 and older so we are anxious to pick it back up again.” COVID, of course, has been particularly rampant on reservations.

They located their subjects through the internet, on websites dealing with language and linguistics and through governmental and tribal agencies. “Many of the tribes will have agencies that deal with languages and history,” says Adams. “We did a lot of cold calling. It was super laborious. The Native American people we work with, many of them, are suspicious and leery and we need to make sure they understand the motivations of the project. [If you search Vanishing Voices – BYU on YouTube there is a short video on the project and the wet collodion process – collodion is gun cotton dissolved in ether alcohol and extremely flammable; it’s all fascinating.] We didn’t really come at this as much about language as about people. Neither of us are linguists. We thought the people themselves were what were important. They represented the last of a culture. I tried to explain to my sister that it’s like a beautiful stained-glass mosaic in a cathedral. You pull out a piece of glass, and another, and eventually our culture as a whole starts to get less beautiful when you pull out too many of them. That’s who these people kind of represented for us,” the photographer relates. 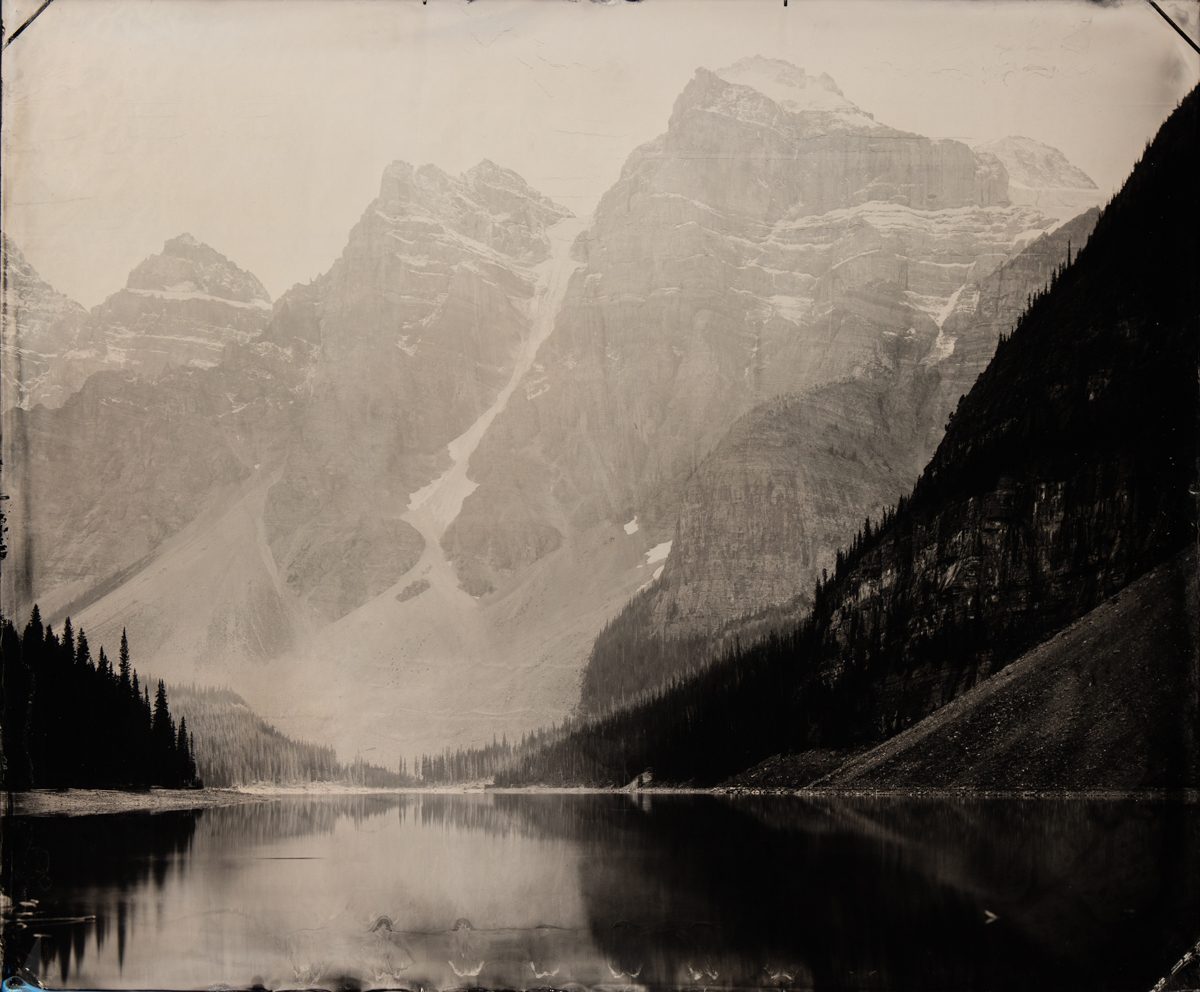 Adams, who lived in Europe as a Fulbright scholar, has been photographing for over 40 years. Born in Washington and reared in the Pacific Northwest, he grew up backpacking and exploring the nearby coastal ranges as well as running rivers above the Arctic Circle in Alaska. He was awarded a master’s degree in photography in 1996 and has taught photography at Utah State University, the Florida Keys, and in Northern England. His work has been displayed both nationally and internationally including at The National Portrait Gallery of the Smithsonian, and his photographs are included in several permanent collections including the Nora Eccles Harrison Museum of Fine Art, Chattahoochee Valley Art Museum, The Chicago Institute of Art, and Brigham Young University Art Museum. His current area of research focuses on alternative photographic processes and digital technologies.

Amy Jorgensen, executive director and chief curator at Granary Arts, says of this exhibition, “We are in the midst of a mass extinction. While the images of Paul Adams and Jordan Layton convey a certain stillness and contemplative gaze from the subjects, due in large part to the nature of the wet collodion process, they also communicate the desperate urgency of the situation. With the loss of language, the lilt of a voice, and articulation of story, we also lose cultural history.”

Noam Chomsky, who made our opening remarks to the MIT Review on the occasion of his 90 th birthday, surely would concur. 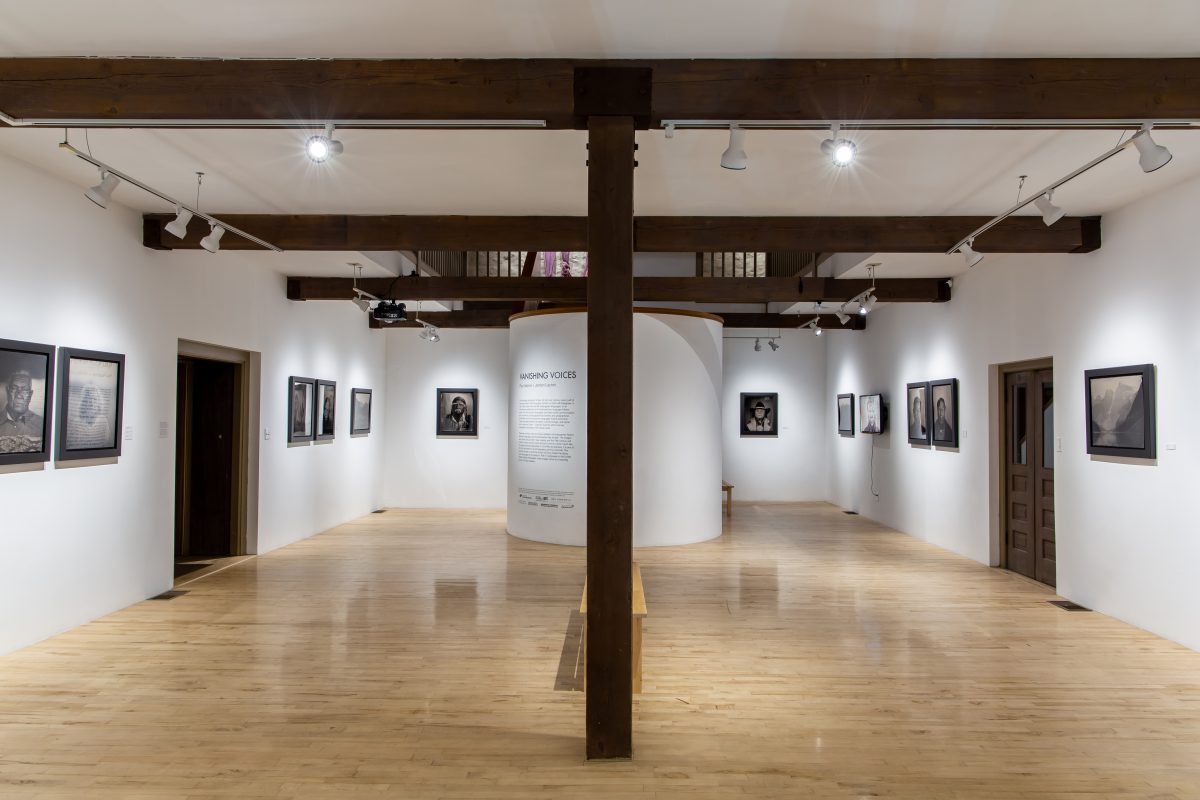