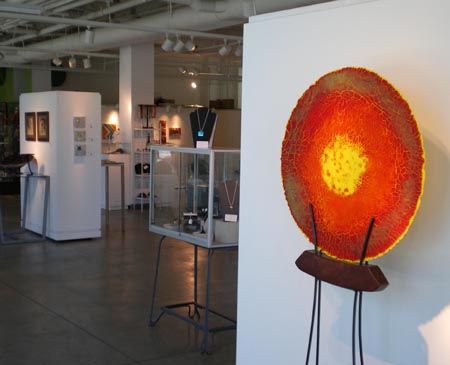 Forty-five years is a lifetime on the job: long enough to stretch from school to retirement. It is also the age of the American studio glass movement, which began in the 1960s with glass blowing breakthroughs by Harvey Littleton at the University of Wisconsin. Since then, increasing control of the expansion behavior of glass when heated led to a new medium of kiln-formed glass. A sampling of the ornamental and sculptural properties of this new art is on display in the Glass Art Guild of Utah’s fourth annual “A Gathering of Glass,” at the Patrick Moore gallery (511 West 200 South SLC) through June 29.

Since its invention in ancient Egypt, glass has been popular in jewelry. Egyptians focused on glass for personal adornment, and many of the most fabulous necklaces, earrings, brooches, and figurines they made are sculpted glass. Thanks to modern technology, a range of iridescent colors and shimmering effects far beyond anything the Egyptians enjoyed is available today, and the pharaohs’ wealth is no longer required to wear them. Intricacy of construction and control of detail are evident in works like Lisa Peterson’s, where glass takes the place of jewels, and in Ann Timpson’s more traditional approach: blending glass elements with metals and other materials.

There is a difference between art glass and glass art, but both are often modeled on functional ware. Bowls and platters that fall toward one end of this spectrum include ornamental pieces designed for use on special occasions, like the playful plates of Lea Erickson and more high-design versions by Mio Cohen. Then there are objects for contemplation that may evoke antique ritual vessels, like the mysterious cones of Cynthia Oliver that lie on their sides and bring to mind distant realms of time and space.

Some objects made of glass have always aspired to be art, and kiln-formed glass invokes them through the work of individual artists who could never have made them during the centuries when working glass was an industrial process. Stained glass is just one of the sources invoked by the fused windows of Christine Kende and Cynthia Oliver. Dan Cumming’s sculpture Inner (Hear) Here recalls the Nouveau crystal ornaments of Rene Lalique and Steuben. The pure color compositions of Mio Cohen bring the articulation of tile to the op-art color schemes of Bridget Riley and Victor Vasarely.

Words cannot do justice to the range of approaches on display. Dinah Ihle, Suz Mole, and Denise Blackett craft various miniature landscapes of the mind, then each mounts hers on a dynamic surface: Ihle’s located in precise optical environments, Mole’s fashioned into stainless steel triptychs, and Blackett’s set on copper boxes. Extreme use of color is seen in Gary Notwell’s extravaganzas, while Jodi McRaney Rusho’s clear slumped works are pure form. Christine Kende’s six-by-eight foot Prowling Turtle Wall takes glass beyond its expected limits. A thematic statement of the range of glass could be the purpose of Jack Bowman’s Fireball, which ambiguously suggests both the sun, the source of light that makes glass live, and an earth full of fiery rock, including molten glass. 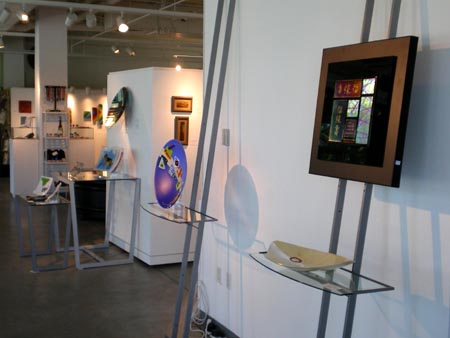