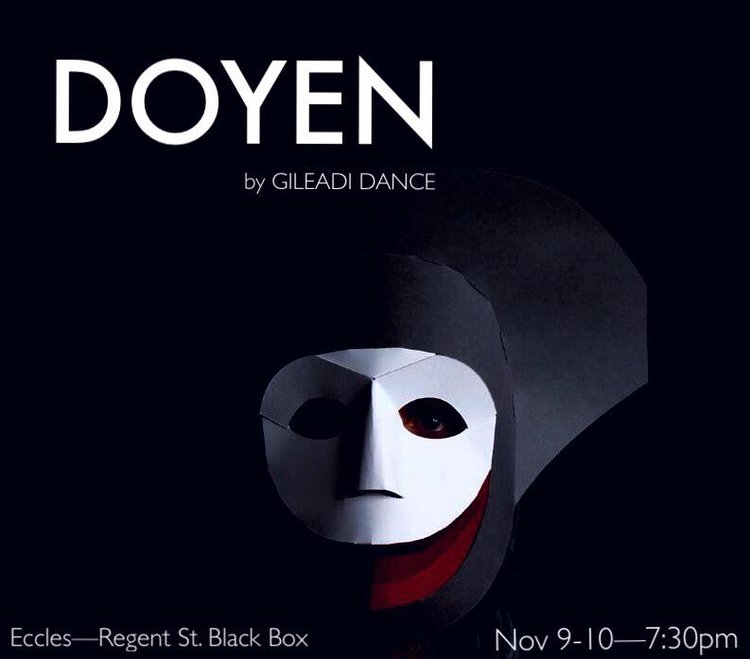 Drawing upon theater, spoken word, and dance, Doyen, choreographed by Miriam Gileadi of Gileadi Dance Co., was an exploration of ritual, anonymity, animism, and groupthink. As performed by Tara Meredith, Deedee Moroz, Dmitri Peskov, Stanton Mercy Rodriguez, and Jake Winkelkotter, some of the most striking choreographic images emerged from unison and rhythmic structure as well as solo material, allowing the audience to be drawn in. Housed in the Eccles Theater Regent Street Black Box, Doyen took advantage of the theater’s superior sound system and lighting options, which unfortunately occasionally overshadowed the actual choreography.

The piece opened with five figures in silhouette, each embodying a hunched, swinging, and loose yet tense physicality. It was quickly revealed that all performers were wearing masks depicting the likenesses of different primates. The dancers wore the masks for the entire piece, concealing their identity as humans and placing themselves in an in-between realm in which animals were personified and humans were reminded of their origins. The masks themselves created tension, as physical movements often created emotions on the otherwise emotionless performers’ faces.

The strongest moments in Doyen were those featuring sharp unison — specifically, a repeated circular canon with a heavy bounce and look back at the audience. The circle truly allowed energy to be built up among the performers, to the point where the breakaway was never as satisfying as the build up.

Further strength came in several solo moments. While all of the performers had featured moments, Gileadi rightly chose to feature Meredith, Peskov, and Rodriguez most heavily. Meredith was a breakout performer, completely embodying the primal characterization and never seeming to falter in her energy. She moved expansively yet without tension, maintaining a sharpness throughout the entire piece. Having not met Gileadi prior to the show, I wrongfully assumed that Meredith was the creator of the piece as the fullness of her performance was incomparable.

Peskov had some satisfying moments in his solo as well. He writhed on the floor with great fluidity and his constant return to standing, while never acknowledging the audience, was engaging. Initially, I was actually impatient watching his movement, yet the longer it went on, the more interested I became. At one point, he moved in unison with live musician Wachira Waigwa-Stone while the lights flickered, which engaged all of my senses in an extremely satisfying way.

Overall, Doyen was engaging at times, but difficult to maintain interest in at others. The majority of transitions between sections felt much too long, with seemingly improvised, unintentional movement as dancers waited for sound cues. That said, I was extremely impressed with the design of the show. The score was engaging and the lighting by Seth Mergist was appropriate in creating a mood yet never drawing full attention unless desired. One distraction, however, was the costuming. The dancers were dressed in all black, but it felt like the directive could have been “find the weirdest piece of black clothing in your closet,” and what might otherwise have been a polished look appeared as a mish-mash of mesh and fringe.

Overall, Doyen was an enjoyable experience and it will be exciting to see what Gileadi and her company presents next. I appreciate her voice in the community, providing an intersection of dance and theater in a way that doesn’t seem to prioritize one over the other. I also greatly appreciate her aesthetic. In a dance world that is becoming increasingly fluid, her dynamism stood out in moments that made me want to get up and sweat with the performers.