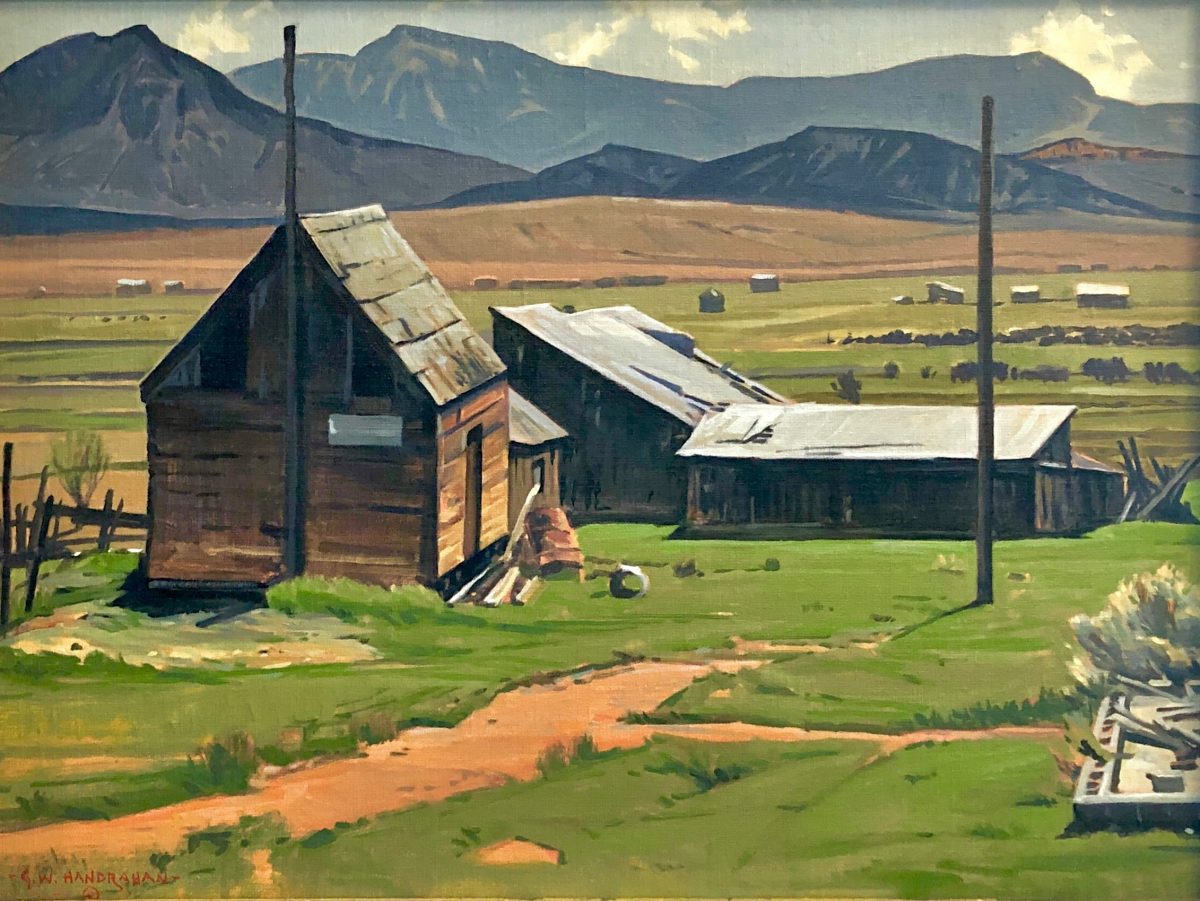 What would you come back to see if you could, after death? Would you want to sit in your favorite restaurant? The one you’d been in hundreds of times, with servers who you knew by name, even your own kin at the table? They wouldn’t be able to look back at you, however. Wouldn’t answer — to the advice you can no longer give. You might in fact be a heavy new weight on them, a complicated weight of memories. They might even be angry. You might soon — disconsolate angel — want to flee. Head for the hills. Go on an expedition, a wilderness expedition, where you can find loneliness and silence like your own. On winding roads, winding rivers — to wonder what you would have found if you’d gone down that river, or lived on that road. 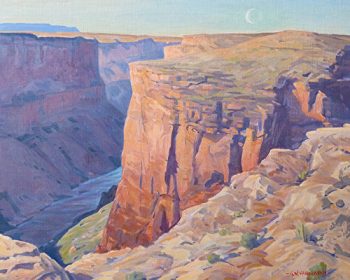 George Handrahan paints them. If you don’t see a road in his paintings, you can guess where one likely is, leading to peaceful, mute farmhouses, whose dark, stern, silent windows give no clues at all about people inside; or you’re likely to see pale glints, suggesting distant rivers, or roads, in the desert. In one painting in the group up now at David Ericson Fine Art, there’s a wide river — the Colorado — coursing through “Dry on Top” (its title expressing delight in the weird juxtaposition of the moving trough of Colorado River just below sun-baked, tall rock).

Handrahan, as plein-air painter, is plain-air witness; he stops to paint straw-stacks for his “Sun and Straw,” stacked like golden unreadable books, storing sun’s color and brightness. He is witness for drolly-named rock formations, as in “Three Gossips in Rain,” painting them, and everything else in that canvas, with wondrous, paled chalkiness, as if his oil paints are mixed with rock-dust collected from the ground where the tilt-headed Gossips stand. It’s one of the finest paintings in this group. 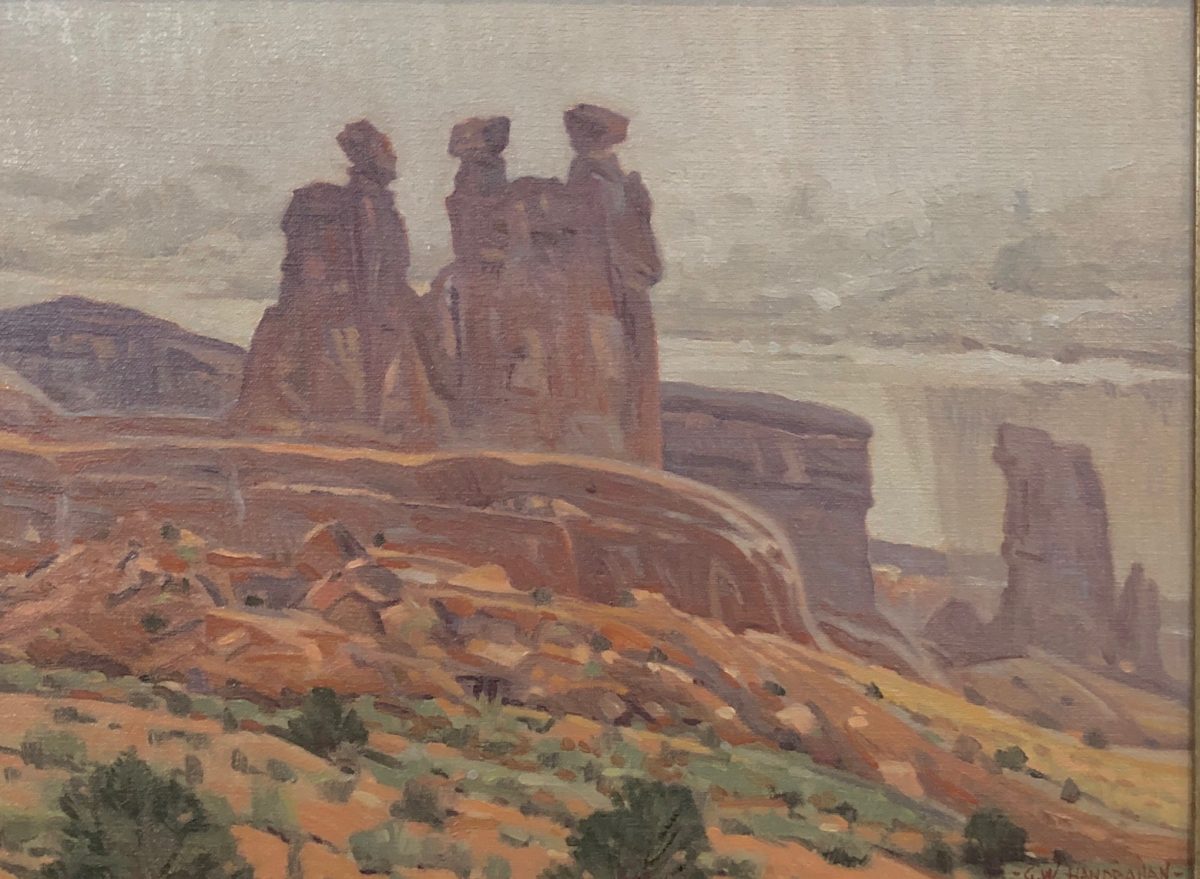 These paintings seem sets for dramas, Utah dramas, for new and bittersweet angels returning home, disconsolate, looking for narrative in landscape, stories of possibilities, eventualities, fates. The realist sets Handrahan offers up are true, but, as any playwright would wish, dramatized. Rocks, roads, streams, rivers, urge you onward. Farmhouses dot or moor the landscapes, each farmhouse with richly slanted roof forming dramatic triangular gables that point to the sky. That triangular, sacred gable space — seen less and less in very modern flat-topped dwellings — is where bulwark, mysterious bedrooms or attic storage lurk: dream-factories and artifact-museums of our lives. 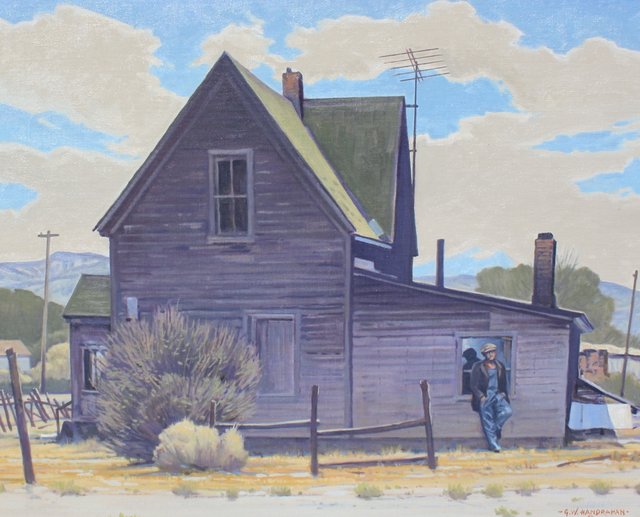 The smallest Handrahan painting here contains the most desert relief, the most oasis. Most of his paintings are much sunnier, but in “Farm at Dusk” he refuses to unwrestle from dark green shadows, and even deeper dark purple in the farmhouse roof, deeply mooring the dark purple buildings’ shadows. Tiny roads leading to/through this farmhouse and outbuildings complex are seen from above: Handrahan, painting, must have looked down from quite far above, the way Prince Valiant always glimpsed a place, from high ridge, the farm below looking almost like a secret kingdom discovered.

Trips to Vermont and Maine have yielded “Quechee Gorge” and the very leafy “Autumn in Vermont,” but the strongest emotions are felt in Handrahan’s Utah canvases. “Storm over Moab,” hanging above the gallery fireplace, might be, in an old English seafaring day, perceived at first as an enormous tall ship on the sea. But it’s cloud ship, instead of clipper ship, big clouds billowing and filling more than half the canvas. Handrahan’s purple — darkly smoky purple, with an undercurrent of blues — is Handrahan’s velvet-curtain effect. Look, say his purples, wherever they appear: hush, pay attention. (These purple clouds and mountains might also remind disconsolate angels they’re not the first to become dust in the wind; not the first to feel small.) 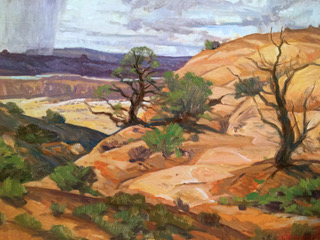 Planted green trees near his farmhouses are green and thriving like chosen children, repaying their parents with protections of shade, beauty, luxury. But in “Rain on Moab Rocks,” his two desert trees are survivors: knobby-limbed trees lifting bough-arms constantly up, for water, like two actors competing for the most attention, onstage. Rain falls in a lavender drench stage-right in this painting, but not on these two trees: not yet. Instead of hunching toward each other as the knobby-headed Three Gossips rock formations do, they’re looking up, appealing to sky, begging for rain.

You’re sure these trees know rain’s near, are hoping it comes to them: just as angel’s kin dream that their dear departed will surely send them a sign, show them they’re loved and remembered: an angelic, healing flash of visit, a forward talisman of luck.