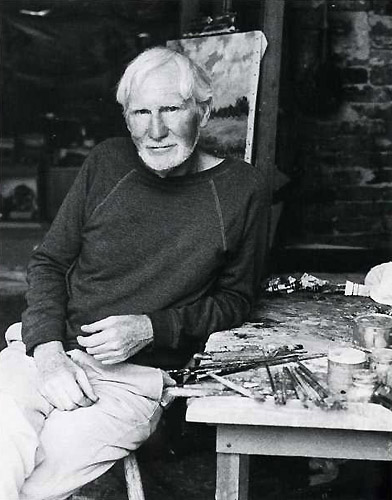 All of us who love the arts community have recently gone through a spate of devastating losses with the deaths of Robert Olpin, Lee Deffebach, Ed Maryon and Brent Gehring. On March 6, we also lost a self-effacing but important figure in Utah art history.

Almost every biography of Francis Zimbeaux that I have ever read begins with, “Francis entered this world as fireworks exploded over the skies of Paris on Bastille Day, July 14, 1913.” And rightfully so! Somehow, these dramatic words serve to set the stage for a man who lived a charmingly eccentric and bohemian lifestyle – right in the middle of conservative Salt Lake City.

Francis became famous for his lyrical nymphs and nudes, which, in his early career, he painted from life. One of his models was his life-long and beloved companion Orthia Davis with whom he had his only son. The artist’s east bench farmhouse, built in the early 1900’s, was packed ceiling to floor with artwork and antiques. A great attraction for both the artist and his many visitors was the untamed and wild backyard garden filled with such myriad pleasures as a goldfish pond, birds that delighted in the seed that he regularly scattered and the old-fashioned flowers growing in hap-hazard fashion. Each year, Francis celebrated his birthday on Bastille Day with friends in this glorious nature-filled setting.

Lila Abersold, Marcia Price and I first met Francis Zimbeaux as we were preparing to curate a retrospective exhibition for him at the Salt Lake Art Center in 1990. After we spent months searching through Francis’ records and paintings and listening to his stories, Marcia wrote the following for the foreword of the exhibition catalog: “Francis is a gentle visionary whose eye is fixed upon the distant mountain where the air is clear and the vista broad. His paintings and drawings have a touch of magic and enchantment.”

The above is true, but his many friends’ memories also include other endearing but sometimes infuriating things that we learned about Francis. He was a packrat! Almost every work of art ever created by the artist was probably still in his possession. O.K. – I exaggerate a bit, but not by much. Shortly after the retrospective exhibition was over and relegated to recent memory, Lila and I sat in Francis’s sun-filled attic studio as he continued to pull out painting after painting from various nooks and crannies. We would have considered many of them for inclusion in the exhibition. When we asked the artist why he hadn’t previously shown them to us, he indicated that he had just forgotten about them.

Shortly after Francis Zimbeaux: Gentle Visionary was hung at the Salt Lake Art Center, we agreed to meet the artist to walk through the show with him. Lila, Marcia and I arrived shortly before Francis did and were amazed and delighted to see red dots on many of the paintings. When Francis appeared, we heartily congratulated him on all of his sales. Francis turned beet red, as only someone who was a redhead in his youth could do. He admitted that he had snuck back in and placed all of the red dots himself, as he really didn’t want to part with any of his paintings.

Phillips Gallery represented Francis over his long career. Bonnie Phillips remembers what hard work it was in the 1960’s when she and Denis first opened their gallery at Ninth & Ninth. They cleaned, hung shows, prepared refreshments and sold art and kept books themselves. It was a rewarding but frantic time. Francis took pity on them and faithfully loaned his punch bowl for every opening. He continued to insist on loaning his well-worn punch bowl long after Phillips moved to its present location on 200 South. Meri DeCaria, current gallery director, notes that Francis attended all Phillips receptions until he no longer could. He was steadfast in his support of other artists.

Photographer Bill Patterson recalls well the first time he saw Francis at Phillips Gallery – tall and slender with a trim white beard, wearing a French beret. Soon after Bonnie Phillips introduced the two men, Bill was invited to visit the artist’s studio. Thus began a long friendship. A few years ago, Francis was to be interviewed for a feature article in Utah Home & Gardens Magazine by Pam Ostermiller and because Francis could hear Bill’s lower pitched voice better than that of most women, he was asked to be there. A few days before the interview, it occurred to Bill that it might be nice to tidy up a bit. There was a large spider web with a dozen or more dead houseflies in one corner of the window near the artist’s favorite chair. When Bill asked what to use to clean it up, Francis looked askance at him and said, “That’s what I use to catch flies!” Needless to say, the spider web stayed.

Francis also possessed a strong independent streak. Artist Bevan Chipman tells about a time about two years ago when he and a close group of the artist’s friends were frantic with worry. Bevan received a phone call from a friend who was supposed to meet Francis at his home. The ninety-year-old artist’s ancient truck was in the driveway, but no one answered the door. Bevan called Bill Patterson who knew where a key was hidden. By eight p.m. everyone was extremely worried. They had searched all the rooms, including the basement. At nine p.m., Francis came home, amazed to see all the lights on at his house and a group of friends standing in his parlor. He had gone sailing all day on the Great Salt Lake with a young friend and had neglected to tell anyone.

Out of the roots of the earth
& tangled web of life,
I seek the warmth of the human spirit.
I dream of a more gentle world.