Percussionists have all the fun. On the symphony stage, while all the other instrumentalists are usually seated in their assigned chair, the percussionist moves around a playground of drums, symbols, marimbas, chimes, and triangles. Some of those instruments you may not even recognize. For example, the gender wayang. But if you’re a percussionist you need to know how to play all of them. American Fork percussionist Gavin Ryan has taken to the gender wayang, and he’ll be taking that interest with him this month to Bali for the next year on a Fulbright scholarship.

Last month at 12 Minutes Max, the monthly showcase of works-in-progress at Salt Lake City’s Main Library, Ryan performed his piece “Gading Mas” or “Golden Ivory” for gender wayang. Gender wayang is a type of gamelan (a percussion ensemble from Indonesia) used to accompany shadow puppet plays. It’s made up of two to four players. “The technique for the instruments is among the most challenging,” says Ryan. “In most other types of gamelan, each player uses a mallet in his right hand while his left hand is used to muffle the notes. In gender wayang playing, each player has a mallet in each hand, and muffles the bars with the back of his hand, essentially playing two parts at once.” His piece references the elephant park in Taro, Bali. “But it’s also a play on words,” he says. “’Ding’ is one of the notes in the solfege system used in gamelan, and the piece uses ‘ding’ as the tonal center.”

Gender wayang is also used to accompany the coming of age ceremony in Bali called potong gigi. The ceremony involves filing a person’s teeth in order to remove animalistic instincts. Ryan says he was drawn to the technical challenges gender wayang presents. That challenge brings a certain eliteness to it. “A fairly small percentage of Balinese musicians play gender wayang” says Ryan, “but I think it’s the most fun to play.”

Ryan grew up in Payson, where music was part of his community. He took piano lessons, his brother played saxophone, his neighbors sang together in the church choir. He began playing percussion in sixth grade and eventually went to BYU where, in his sophomore year, he was introduced to gender wayang. He was drawn first to the technical and structural aspects of the instrument, but when he began to understand how the instrument functioned at a cultural level, the role it played in the community, he began to think of it in terms of the role music played in his own upbringing.

Ryan created a community gamelan ensemble in American Fork called Gamelan Madu Kencana. Commonly associated with dance, gamelan consists of different types of bronze xylophones and gongs. There are roughly 30 different types of gamelan in Bali, and most serve some sort of religious or ritual function in Balinese Hinduism. All the music is learned by rote with no written music. Because of this process, it can take countless hours of rehearsal to learn one piece.

Ryan received a Fulbright Grant to study in Bali from September 2016 to September 2017. “I’ll be studying a lot of gender wayang, but my main proposal focus is on a type of gamelan from East Bali called gamelan selonding. It’s a really ancient and rare style of gamelan that hasn’t been available for Westerners to play until about the last 40 years.” Before returning home, Ryan plans on buying a set of instruments to bring back. He will then form the first selonding ensemble in the United States to join his ensemble in American Fork.

Ryan acknowledges that part of the fun of being a percussionist is the number of instruments they get to learn, but it’s not necessarily good for the ego. “The downside is feeling like I’m just mediocre at a bunch of things instead of being great at one instrument, but I can’t imagine practicing violin or piano or flute for 10 hours a day. It’s nice to be able to switch things up and keep my mind fresh. Percussion has also led me to explore music from other parts of the world (such as gamelan) that I know I wouldn’t have investigated if I played something else.” 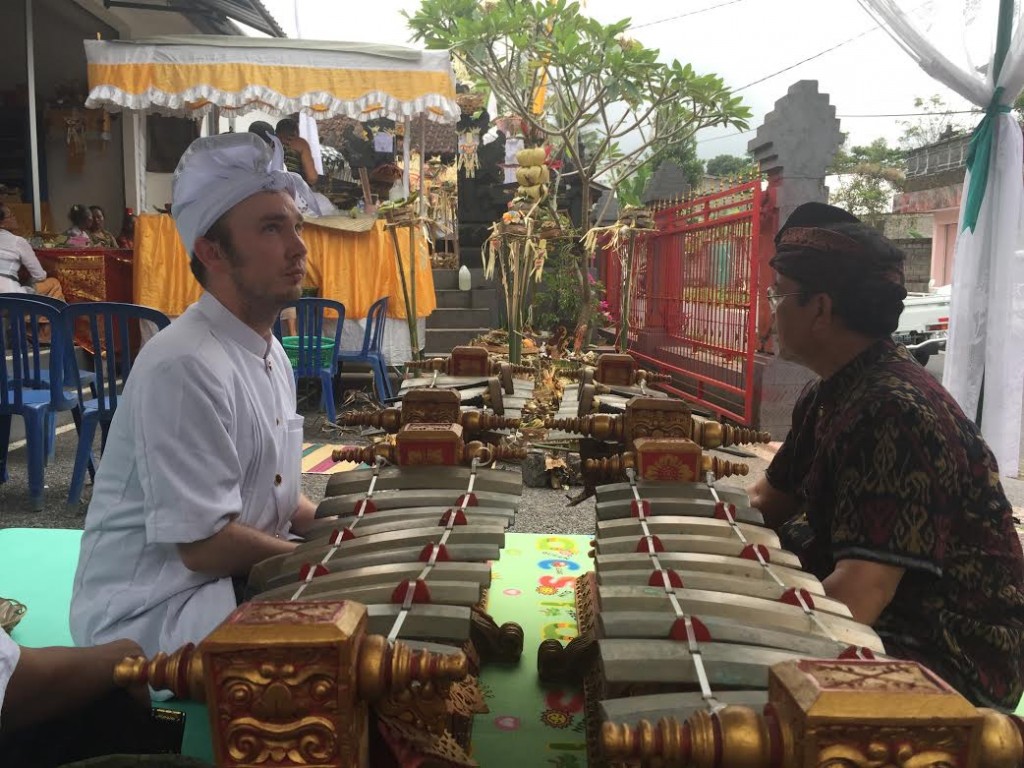