Full of Capabilities: The Glass Art Guild at Library Square 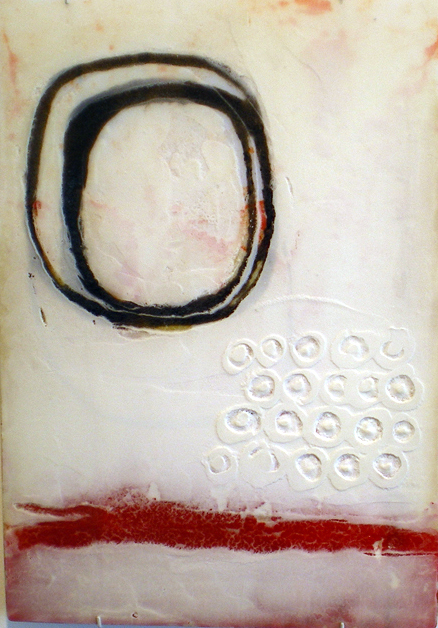 The twentieth century saw a number of mediums long relegated to the status of crafts recognized as capable of producing fine art. While Martin Puryear and Andy Goldsworthy were proving that just about any material could generate a satisfying aesthetic response, in the hands of sculptors like metal forger Albert Paley, ceramist Peter Voulkos, and glass wizard Dale Chihuly, it seemed for a brief moment that specific materials could be used to make art in which, to use a Hollywood metaphor, they appeared as themselves rather than pretending to be something else. In a painting by Mark Rothko, mute canvas and earthen pigments conspire to create the illusion of an interior space brimming with spiritual light. In glass, transparency opens up real interior space and the palette of light the artist wields is genuine; its behavior is “live,” not re-presented.

Alas, the audience never materialized. Before the century ended, the exquisite subtleties of tension, ductility, and luminosity that called for the continuing, intimate encounter of a connoisseur were swept aside by scale. Art became ensnarled in the search for sensation and spectacle, and it became entertainment. What does Chihuly’s tower of glass at Abravanel Hall have to do with personal experience or with being human? It’s not art; it’s an inverted hood ornament that identifies the passengers instead of the car, telling us they, or we, have good taste, and lots of money.

Perhaps because we expect them to, most glass artworks resemble either paintings or sculptures. Julie Stutznegger, who made a strong debut in the Glass Art Guild’s recent show at Red Butte Gardens, dominates the current member show at the Gallery at Library Square with abstract panels that display an impasto so thick as to approach bas-relief. Done on white with a few strong blacks and reds, their sparse yet eloquent calligraphic gestures against quiet, even laconic fields and patterns make for muscular if ambiguous statements.|0| In “Malleable,” a black line navigates between a gray and a red square and beneath a large black umbra that resembles a fingerprint. It’s a journey in which ports or persons are seen as events. Stutznegger has a vast vocabulary at her disposal that opens with longer looking. In “Malleable” and “Untitled 003” the surface is glossy, but in “River” the matte surface shows tool marks, as though the white were troweled on to cover and hide the red, which leaks through it the way pain does around the corners of a sufferer’s eyes. 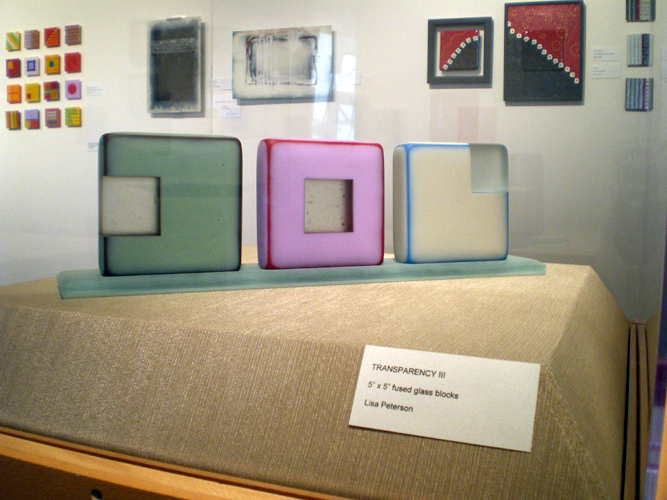 There are things glass can do that other mediums cannot. With their muted colors, Lisa Peterson’s cubical sculptures look soft, like overstuffed pillows. Or the edges and corners, where the colors shift to richer hues, may suggest age and wear. In each, an implied cutaway of the skin reinforces the geometry while permitting a misty view into the interior space, which seems larger than the container allows. In an alternative reading, a contrast is created between the pure, empty form of the block and the painted surface. The one version is psychologically evocative; the simultaneous second one is pure aesthetics. Both coexist in the object as they do in the mind.

Fans of stained glass will appreciate how Donna Pence uses mosaic technique to create the effect of dalle de verre — slab or faceted glass — with the delicacy of Tiffany’s copper foil lamps. In “Mission Dolores” she suggests the way sunlight consumes color in the desert Southwest. Christine Kende, who uses the multi-light window format to display fused and slumped panels, branches out here with “Waves,” a deceptively naïve-looking tour-de-force of pate-de-verre: a slurry of crushed glass fused together with entrained air bubbles to produce a confectionary visual feel. Another window-maker and pate-de-verre master, Kathi Olsen, also strikes out for new territory here, embedding gold foil — a Roman technique — and dichroic glass, a true “Space Age” material, to explore the role of horses as dream material and icon of the imagination. Despite their size, the tiny figures in “Stacked Horses,” evocative of Classical Greek models, loom in the mind like Leonardo’s lost monument. In the larger examples, the fugitive nature of mica and gold inclusions gives the subjects the quality of legend: present in gesture more than detail. 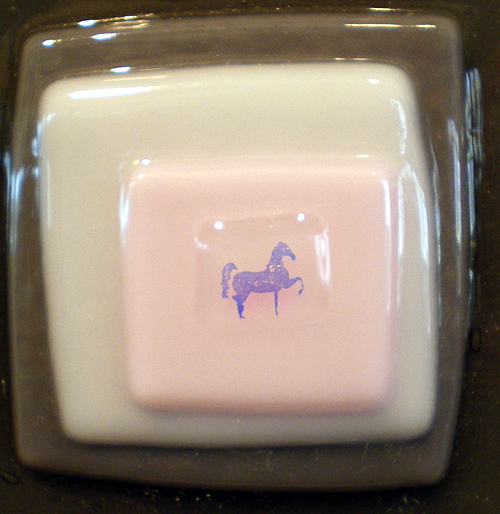 Meanwhile glass, like most of what we used to think of as art, has been left in the hands of those who refuse to give up on objects that communicate what it feels like to be us. Transparency — which allows what is solid to seem empty — and translucency — which allows what looks solid to gather light and seem full of energy — combine with brilliant colors, rich textures, and fragile shapes to make glass a satisfying, evocative, at times compelling medium. Utah’s Glass Art Guild easily overwhelms a poor critic with too many examples to permit doing justice here. Even a selection seems like arbitrary violence. Inclusion should not even suggest exclusion. Make your own justice by visiting the fourth floor of the main library, itself a light-filled glass box contrasting vast, visually accessible spaces with reflections that surprise and confound the eye. Thus one of architecture and glass’s more successful public contributions doubles as a jewel box for some literal and figurative jewels.

The Glass Art Guild’s Member Show continues at The Gallery at Library Square through May 31.