From Vandalism to the Vapor Trail with McKenna Anderl 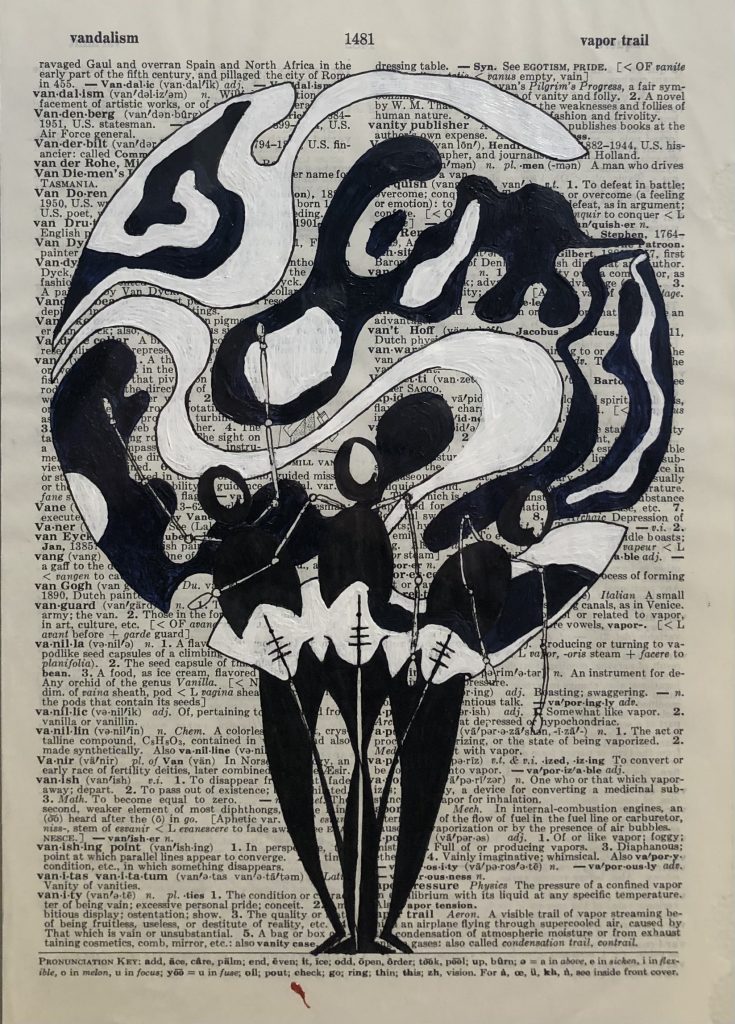 On the one hand, the term “orb” might mean nothing more than a sphere, which is what McKenna Anderl, recently the Junior Artist in Residence at BDAC, chose to paint on a salvaged dictionary page. But then again, the word, primarily used in phrases like “the orb and scepter,” which denotes the symbolic globe held possessively by kings and queens in their portraits, properly refers to a particular manifestation of the world. So before looking more closely at this orb, we might well ask why Anderl chose to create it on a page that is headed by two words: “vandalism” and “vapor trail.” She would not be the first artist to admit to having vandalized someone else’s labor for her own purpose. No less a major artist than Banksy, after all, never speaks of his “art,” but rather of “my vandalism.” Vandal he may be, but Banksy is a hero to many in his audience. Yet his works, like those he made in Park City a few years ago, are often short lived, painted over or stolen as soon as they are recognized. So adding to the artist’s dilemma is the often ephemeral nature of their products. Is this what McKenna Anderl means when she figuratively locates her created world, her “Orb,” in the space between vandalism and vapor?

“Orb” initially has a shimmering, liquid quality about it, but a closer examination reveals a scene out of science fiction, or the fantasy and magic that preoccupy so many people today. Key to decoding this reading are the feet it stands on and those thin, flexible arms, which once identified seem attached to torsos, on which sit heads with large eyes. A foot or two back along the wall and a few thousand years from this futuristic scenario hangs “Knight,” an armor-clad warrior on horseback from the age of fable, surrounded by heraldic symbols and with braids running down his, or is that her? … well, their back. For all the familiar themes and details, these both can be dated reliably to the 21st century. 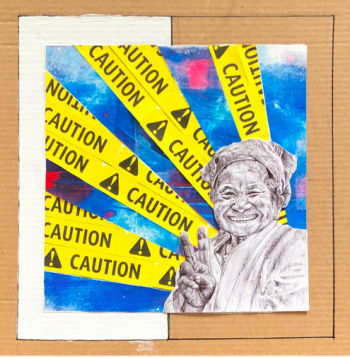 A catalog of Anderl’s subjects would include portraits, a ship, a Western figure, several Asians, a high-diver, and some works that feel like pieces of a visual memoir. She’s hardly the first young artist to display such a range of options, as if she were advertising her arrival in the marketplace of art. But she also conveys a sense that an artist today faces less pressure to specialize, more freedom to tackle a wide range of genres and subjects, even as her freedom remains inseparable from greater responsibility. “Grandpa,” a meticulous composition-in-depth featuring an old man asleep in his wheelchair, accompanied only by his reflection in the sliding glass door — the sliding door updating a classic symbol of the journey between this world and the next — is about average for risky social situations among the 14 works collected here. “Sunset Man” celebrates a Western classic, a lone man with a gun, but queries his future place and our present safety. In “Cautionary Peace” (my favorite) and “Peddler,” Anderl journeys via her imagination not just to other times and places, but into lives very different from her own. 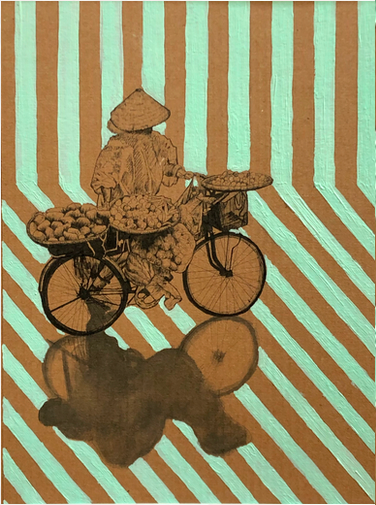 Dream It, Then Do It shares a gallery with the Annual Davis School District Student Exhibition: an almost overwhelming assortment of student art works, many of them excellent and some that are superb. But each student has chosen one thing to show, where Anderl has done 14. This is one measure of a residency: a down-payment on the ten thousand hours of practice said to be necessary for mastery. Sometimes an artist will exploit a residency to try out a new technique in depth, like when a painter explores printmaking or sculpture. What Anderl has chosen instead is to try out unusual materials, like the packaging her art supplies come in. So not only does she run a gamut of genres, from potentially commercial applications to more personal topics like religion, social commentary, and humor, but she does so in a range of unfamiliar materials and unusual combinations of media. To see her work embedded among that of so many of her peers, yet emerging from them, is to enjoy a privileged insight into the predicament of today’s apprentice artist, facing a world of unprecedented possibility and, at the same time, most daunting challenges. As climate change, anti-democratic politics, and a drought that is drying up our rivers and lakes bedevil our dreams, it’s good to know there will be a new generation of artists standing ready to help face them.