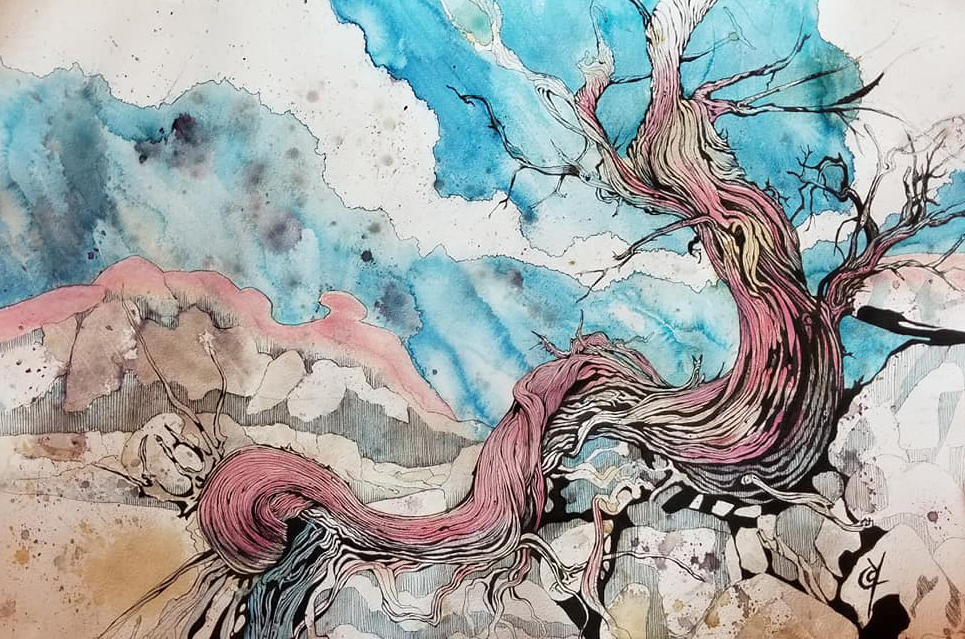 From the high deserts of Utah to the shores and redwood forests of the Pacific, the exhibit Intersections in Nature describes and investigates landscapes that have impacted artists and local residents Cody Chamberlain and Len Starbeck. Both artists use their histories of mixed outdoor employment to inform their selection of materials, the subjects they depict, and the way they progress from concept to finished piece. Together, the paintings and sculptures provide a balanced show that provides art and wilderness lovers a space to appreciate two different interpretations of outdoor sights and textures.

Both Starbeck and Chamberlain have developed unique practices and style, which they use to reflect on their experiences of nature. With signature winding lines in black ink, Chamberlain dances between faithful recording of the alien shapes of the Utah desert and artistic stylization. He hikes and takes photographs of twisted trees and cracked mud, using these images as references, but pushes their wildness further. As a US Forest Service employee and former archaeology student, he’s had his fair share of time observing the desert. He developed as an artist while studying for his bachelor of fine arts degree in painting at Utah Valley University and learned stratigraphic drawing during archaeology field school. He both adds and reduces detail to create his signature style.

In “Twist of Juniper,” the sharp black lines of the tree and surrounding rocks are set off by a loose background of dark splashes and drips. Chamberlain adds linear detail to the form of the tree, while reducing the complexity of the background through the use of repeating patterns (the parallel lines on the side of the cliffs). In “Piñon,” he similarly keeps the ground from becoming too complex with a regular blue-and-white rock pattern that approaches the regularity of print. The blue paint, however, is splattered, so the viewer’s experience of regularity is still interrupted. These different “push and pull” effects create balance and keep the pieces from getting either too busy or too bland.

In contrast to many of Chamberlain’s pieces last year, which he created using oil on linen, the bulk of Intersections in Nature is on tea paper and made with ink, paint, and gold leaf. “I start with beautiful paper that’s almost art by itself,” he says. He then takes this paper and experiments by splashing on tea, coffee, or chemicals, creating a background layer of chaos that he may leave alone or crosshatch into clouds, mountains, or rock formations. 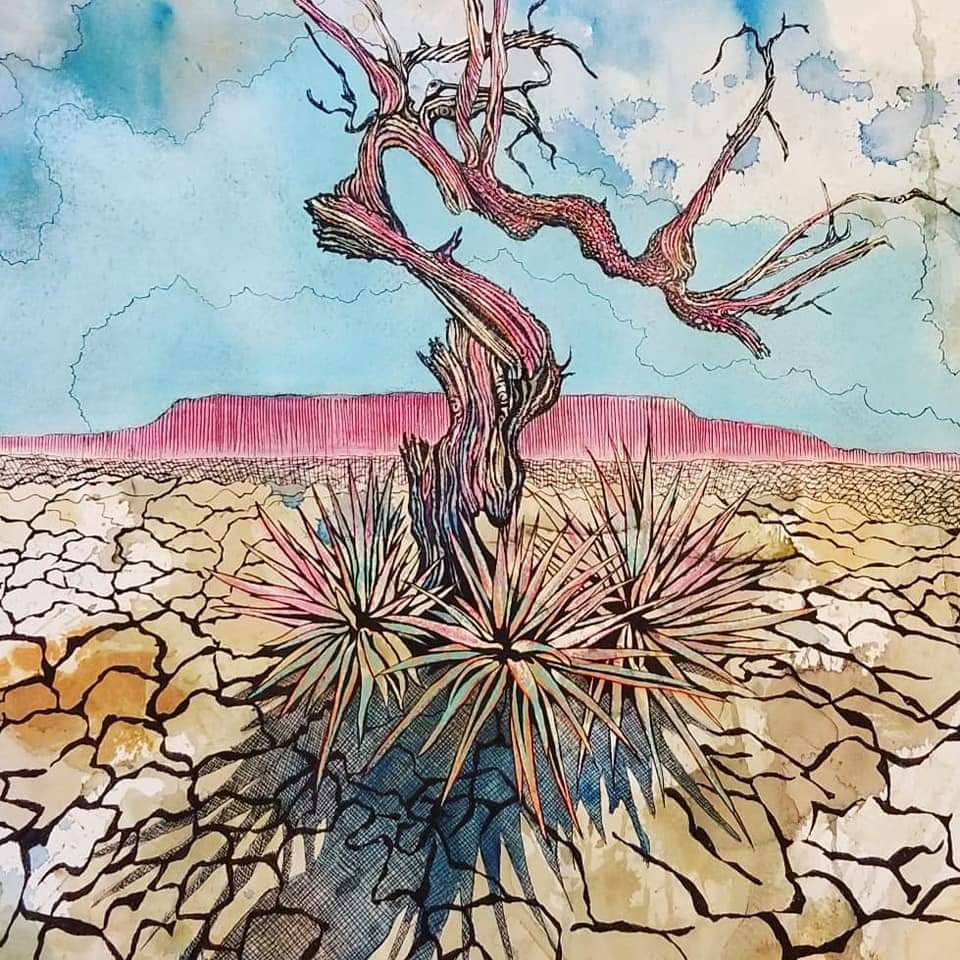 His deftness with a pen and the occasional break from neatness make his cracked piñons and junipers reminiscent of Ralph Steadman in a mild mood. The multicolored sky background of “Yucca Mountain” is a good example of his ability to abandon control in one section of a piece, with the regular marks of the sun-baked desert floor providing a neat contrast. He successfully combines illustration and “higher-brow” splatter techniques in most of the 22 works on display.

Chamberlain also displays a single large oil painting, “Rockwell Ranch Juniper,” in which he strips away his materials and technique to a more traditional landscape approach, but maintains the high-contrast, twisting line quality that’s his signature.

In contrast to Chamberlain’s desert hiking, many of the experiences that inform Starbeck’s artistic practice are from his time in the ocean. Starbeck began deep-sea diving when serving as an independent duty corpsman in the Navy and found the abalone shells featured in his work during routine beachcombing near Fort Bragg, California. He combines materials and uses techniques he has picked up over a life of hard work and different ventures into creative outlet. “I’m a self-taught artist and I have experimented with different materials and objects,” he says. “I started woodworking in the ‘80s, when I was making clocks.” 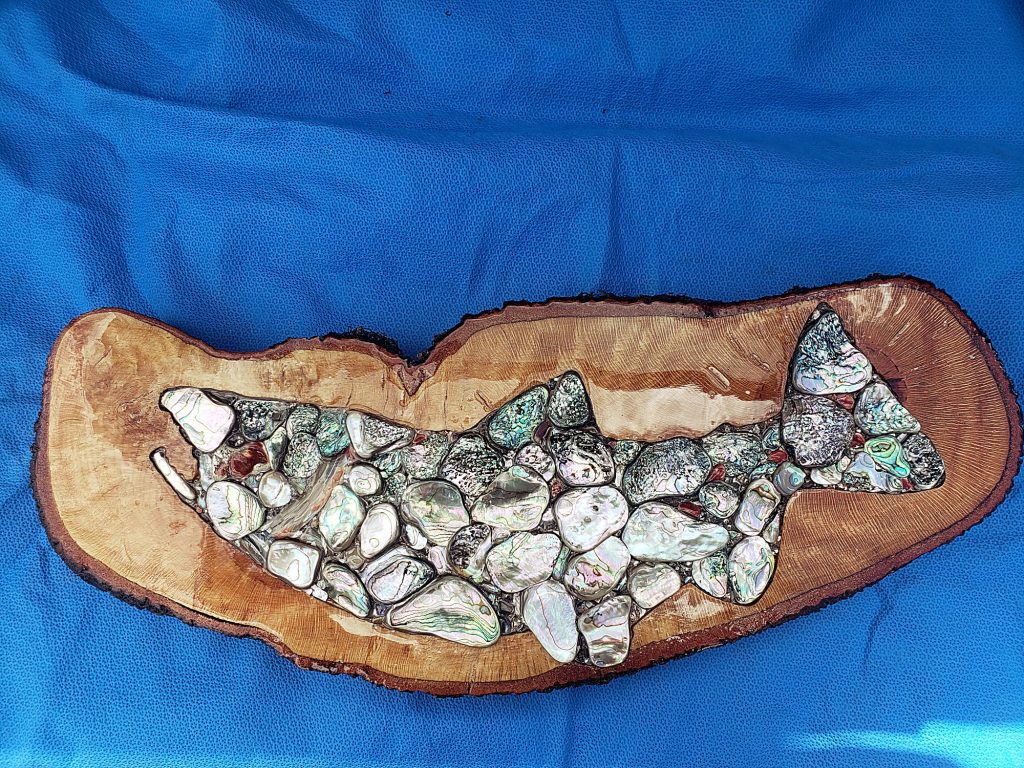 Many of Starbeck’s pieces incorporate recycled wood (some of it found and upcycled, some bought from local landowners who have old wooden structures on their property). His redwood mounted work is paired down in subject, with only one animal or small group of animals in inlaid abalone per piece. They’re also ultra shiny: Starbeck’s cross-sections of redwood are covered in a high-gloss finish. The gleaming surfaces mirror the shine of the polished abalone and the watery domain where they once rested.

Standing in front of “Whale,” light plays on the rippling surface like the sun on a body of water. The piece is made from a near-black slice of wood, darker than others in the gallery. Looking at the work, you catch sight of your own reflection before your eye finds the solitary abalone sperm whale drifting near the bottom. The oscillating colors of the shells read like patterns of light filtered through moving water above.

Another piece with an aquatic subject, “Salmon Run” shows three fish made of tessellating shells and plays with the idea of the old fishing trophy. But instead of a stuffed and mounted fish, these representations swim through their wooden background, showing a slice of the animals’ lives rather than evidence of a fisherman’s kill.

But like Chamberlain’s pieces, these sculptures contain reference to the harsh realities of nature, even the ecological destruction that’s been accelerating in the past decade. Starbeck says that he collected over 2,000 pounds of abalone shells as a result of the mass dying of these mollusks near Fort Bragg. In 2017, an explosion of purple sea urchins caused by a “perfect storm of environmental stressors” resulted in too much competition for the abalones’ main food source, which led to the shells washing up en mass.

Starbeck’s exploration of the life-and-death cycle is also found in Chamberlain’s understanding of nature, in which he says: “I see the cycle of life and death starkly exposed.” Although one artist gained inspiration from the desert and the other from the ocean, both investigate where they and their art are immersed in natural processes, creating work that reflects their pasts and interactions with vastly different landscapes.