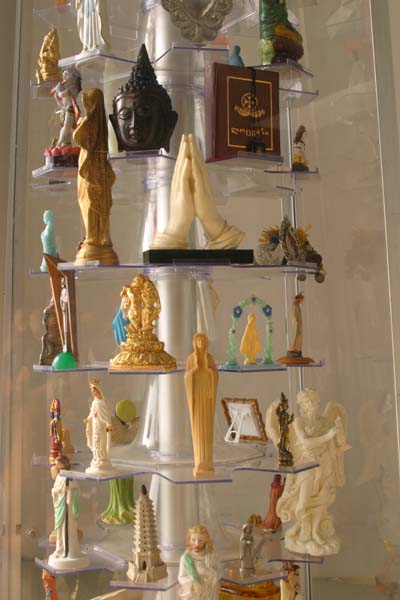 The first time I saw Frank McEntire’s work was back in 1986. He had a one-person museum exhibit called “Divining.” In that show I was particularly impressed by his wrapped divining rods and the boxes full of “things,” things at once precious and banal. My questions to him at the time were something like: “Do you perform rituals which you then translate into your work? What are these rituals?” He gave me some evasive response, not really answering my questions. Perhaps he felt his privacy invaded by this bold stranger asking about personal ritual.

As I’ve come into contact with his work thru the years, the same questions remain. And so recently (no longer a stranger), I asked again: “What are the rituals that inform your work and do you perform them?” This time his response was simple and direct: the very act of going to garage sales, antique and junk shops, salvage yards, and dumps “gathering and bringing the objects together” for him is the ritual. People are often asked by him to offer an object of their own to an installation, or the way they are guided thru the space by the placing of the various pieces, for Frank constitute the ritual performance. 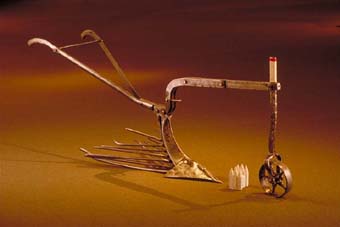 It is ritual free of dogma and is nondenominational; ritual brought back to its primal roots: the human need to respond to the ineffable. For example, in 1992, I participated in a rtual performance that was part of his Reassemblages exhibit. The other partcipants included those gallery patrons who brought “offerings,” a Reverend Canon Pastor, a dancer, a Tibetan monk, a Verger, and a poet.

For me, Frank descends from “that DaDa strain” (ARP, Schwitters, Ernst, Duschamp, and all), for whom the urge to make is the birthing force at the core of their activities as artists. In the words of the American composer Charles Ives, “Perhaps the birth of art will take place at the moment in which the last man willing to make a living out of art is gone and gone forever.” This is an ideal. What poisons art is not that an artist gets paid for a work, but that he or she makes art to get paid. 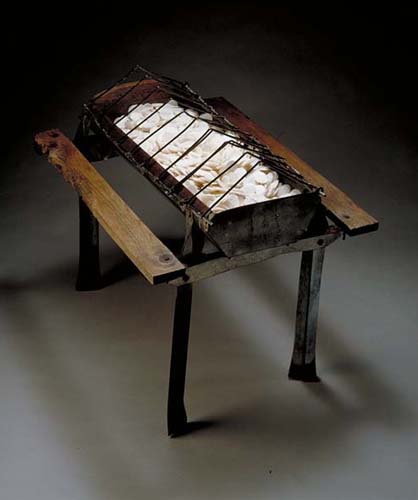 When you look at a work by Frank McEntire, the idea of art as commodity does not readily enter the picture (no pun intended). And though this is a disadvantage if you want to make a living from art, it is a definite advantage if you are making art to live. The urge to make is the distinguishing mark of authentic art and the very reason for its coming into being. If a work of art sells, fine. But it does not spring from the demands of any marketplace.

Frank’s brand of making art is centered in assembling objects and imagery from various religious and cultural milieus, with elements of ritual as the subtle substrata to everything he does. His 1994 exhibit, Ceremonial Expressions, represented a future entry into those realms of ritual and making: a Coleman stove turned altar; golden auras; gilded hybrid shapes; frozen manifestations of visions, idiosyncratic, yet shared; divining rods; a steeple embedded in a mound of cedar bark; tar; time cards (punch in your god); oil on canvas; rope; peacock feathers; pages from hymn books; medallions; crucifixes; hair; rosaries; nails; a counter to register the turns of a prayer wheel; a bible; wax; a mound; candles; salt; objects; forms and statues wrapped and bound. 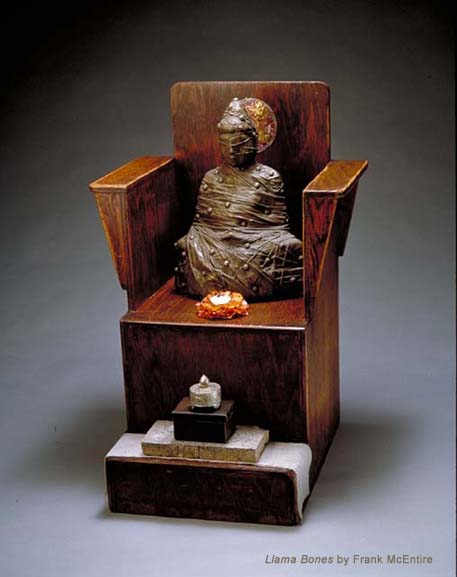 I’ve seen statues and other ritual objects wrapped up like that, in Sicilian churches; put into storage, in the back rooms beyond the main altar. And though the idea of wrapping and binding objects as used by Frank is based on artistic and intuitive considerations, the result is similar; that is, they are manifestations of potential energy, of hidden and bound forces.

Frank shares in the same mysterious vision that in modern times also motivated Man Ray to wrap up objects. The artist Christo uses this “technique” for his own purposes, deritualizing and demystifying the whole process. Frank carries it to its logical, quasifetishistic end. 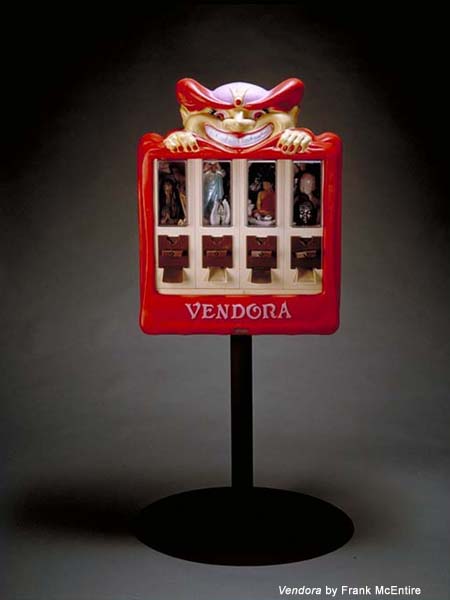 As you enter one of Frank’s exhibit/installation spaces, the overall feeling is of a setting created to encourage people to take a subjective part in the whole (here “subjective” is synonymous with private outlook). It is a room full of vessels, each containing and proffering potential discoveries.

Frank McEntire’s Hidden Text will be on display at the Nora Eccles Harrison Museum of Art through February 19. 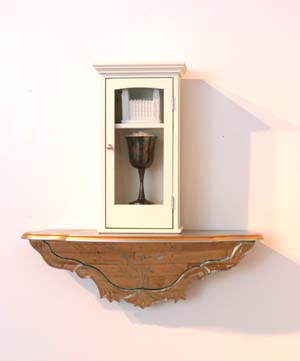