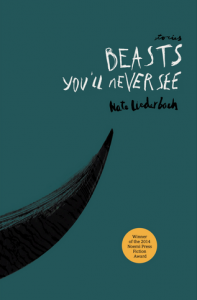 When our youngest sister went anorexic at twenty-nine her cheeks sprouted mold-white peach hair, her gums grayed, her auburn mane scraggled dull and spit clumps, yet we couldn’t mention it.

The story is titled, “Daddy Bird.” And from its opening the story sways equal parts between warm family holiday tale and proscribed unmentionable rage. Until the end that is, when at a theater on Christmas Eve, nervous sibling affection uncorks on a stranger with sudden violence before the movie trailers can even give way to the “Brokeback Mountain, 9:05 screening.”

The narrator, big brother to Erin the anorexic, as well as step-in dad—Daddy Bird—for a father dead too soon, has a temper, self-described: “…my temper is terrible. My temper is so spit-filled and sudden, so biblically prodigal it scares even me. Wets my armpits and I condense. But I love my temper too.”

But it isn’t Daddy Bird who uncorks.

This story, along with the others in this collection, is a frenzied dance of language managing a delicate tiptoe along the fracture line of the beautiful and the grotesque. Not a single character walks a common path here. But isn’t that true of the world? Of our neighbor? Of our sister? Our spouse? We all tiptoe to keep the beasts, our own beasts, asleep and behind us.

Zig. We hire a new guy, Zig. Just Zig, short for nothing. I tell Zig of Mike, but Zig’s the type of ubiquitous one-upper who’s haunted me since grade school. His sister, he claims, has a tail. He’s saying, “Great, eyelids, sure, but my sister, well her tailbone, understand, it kept growing. Bro, she wags it, so this ain’t no spina bifida. Don’t think it’s spina bifida, Bro.

In “We Have Trajectories” there seems to be no driving force for the narrative beyond the anecdotes of oddities that occupy the narrator’s workaday life: an inverted goldfish, eyelids that never stop growing, Zig’s sister’s wagging tail, the line-cook’s roommate: “‘My roommate in college, well this boy only shit once a month.’… He holds up his fingers, and he’s only got nine and a nub. ‘But this turd …’ He closes one fist, sets the other over his heart. ‘This turd, this single turd, coal-black, size of an acorn. I swear it.’”

The narrator keeps one important anecdote to himself: He has a son he doesn’t know. That no one knows.

In Beasts, learned namedropping occurs a lot, including philosophers. Everyone is reading Nietzsche. Or Kant. Or their spouse is deep in Heidegger, or an old friend—lots of old friends pop up—is recommending Siddhartha:

“One of those Oprah books?”

“No, man, old, older. Published in 1951, the year we were born! Siddhartha, he listened to the river, found peace that had no name, lost his own name.”

In “Dick the Fourth” a sixty-something man confronts mortality when his father, the Third, lies in a hospital bed, and an old high school chum stops him in the parking lot. This friend, Tang, wants to reminisce and get Dick to tell him stories, “cracks,” from the old days— in particular one story about adolescent sex on the Third’s living room floor with “Bloomers,” Sarah Bloom, which dad interrupts. Dick the Fourth obliges:

“Oh boy, and I was on top of her just pounding away–”

“Yeah, there was a lot to pound away at!”

“And Dad, well he hears something and gets up, comes downstairs and flips on the living room light, and Bloomers just freaks out. Dad, he’s all flustered, and just saying, ‘Oops. Sorry ma’am. So sorry ma’am,’ and turns off the light and goes back to bed—”

The Third gives the Fourth a talking to the next day, with all the requisite warnings of men he knew having “sex diseases so bad they pissed themselves, had to wear diapers at forty—.”

And Tang howls at the telling: “That’s it! Oh that’s it, man! That’s the story!”

And it is like that for the reader. “That’s the story!” Liederbach tells a story.

In “The Roads Amputated the Legs,” two college English professors, one young up-and-coming, the other dying of a brain tumor and confused, face mortality. One, from the loss of his mentor, the other from the loss of everything. The up-and-comer is wondering at the demise of his own distinction built from the help of the older man. Who is he without his coach? What does it mean?

“Doesn’t matter though, see,” [confides the younger]. “No, it can’t mean–it is meaning. Felt. And that’s prose. Showing and Telling drop their distinction, and the writing knows for itself, of itself, and its self is universal…”

What do we make of this as reader? What does it mean? Should it mean? In the end, it doesn’t matter. The world of this collection is fraught with beasts most will empathize with, because in their subtle form we don’t see that they are lurking among us, within us.

In perhaps the most ambitious story of the collection, “The Distance,” a hapless father, Sam, divorced from his wife, Keri, and weekend warrior-enabler for his fifteen-year-old daughter, Isabelle—Iz, “The Izzue,” “Daughter,”— grapples with his role. Too hip to be real. Too afraid to not be hip. Sam dizzies his Daughter and reader with language:

Let’s see, closing arguments. Hm, well, I’ll present the case of Ash. That’s what I’ll do, got it? Then what you’ll do is finish your over-priced oats and organic cow juice. And, after that, well you’ll kindly scrap that incendiary frippery strapped, without a single critical thought, to your burgeoning bosom.

Iz plays along but just … can’t. “‘Man,’ she groans, ‘like ten percent is funny, but the rest of what leaves your mouth is, like, I mean, Dad, it’s like practically porno—incendiary frippery? You’re not funny. Not at all.’”

The story dodges between third-person and first-person point of view. Time is fractured, folded over, repeated, projected. It is a domestic twelve-round brawl to read. Impossible to not look away. It scrapes along with below-the-belt hooks and eye gouging with no referee to step in. Mother, father, exes, parents, Daughter.

“…What of all the truly astounding conversations we’ve had on our weekends together?” [the father says]. “You’re no reactionary floosy–“

“No. Or I mean me … too. Me especially. … Plumbing the failure of words, the beauty of abstraction. How making oneself the arbiter of others is to turn oneself into little more than a brittle measuring stick…”

“Because I don’t take it so seriously, Father, not as you–”

“Iz, Love, Honey, I want you to be proud of your parents’ tensions, their struggles, their divorce. Is that insincere? Is it…”

Who knows exactly where the beasts are, even though Liederbach seems to put them behind every page of this slyly startling collection. Or, as reader, as passive participant in what we may interpret and recognize from our own lives in these pages, must we also confess some of our own culpability for putting the beasts there?

Nate Liederbach is the author of Doing a Bit of Bleeding, Negative Spaces and Beasts You’ll Never See (winner of the 2014 Noemi Press Fiction Award). Among other honors, his writing has received the Academy of American Poets’ Larry Levis Prize , the Atlantic Monthly College Nonfiction Prize, a Best New Poets inclusion, and the Utah Original Writing Competition’s Short Fictin Award. He lives in Olympia, Washington.

You can find our review of his Negative Spaces here.