Fire and Its Aftermath: Rod Heiss at BDAC 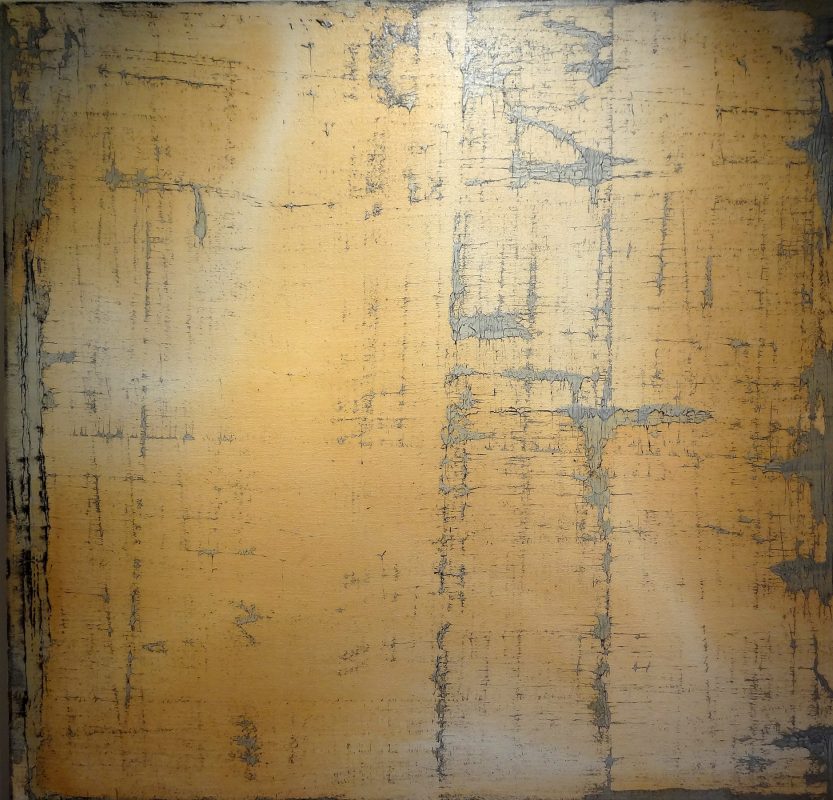 [dropcap]A [/dropcap]sometimes helpful way to conceptualize Modern Art is “old wine in new bottles.” James Joyce, the essential modernist, took a 2,500-year-old epic poem, the “Odyssey,” and repackaged it as a novel—a literary form only a couple of centuries old—that he called “Ulysses,” after the poem’s protagonist, even though no one in his novel goes by that name. Visual arts have proven, if anything, even more protean than writers. Joyce’s fellow Irishman, Francis Bacon, often called the most important painter of the post-World War II era, painted figures drawn from his friends and lovers, full-body portraits in which he used an ever-changing variety of rags and scraps of material instead of brushes to arrange the paint on his canvases. His figures and their faces were strange then, and are still today, but their biographical narrative harks back to the entire history of representational art, and his innovations now fit comfortably among the uncounted, unconventional approaches artists have invented in the decades since.

Rod Heiss belongs in that modern tradition of finding new ways to express familiar content. His current sampling of 11 canvases, at Bountiful Davis Art Center, presents not just one, but two experimental approaches to what will probably still be called painting, even though neither relies on brushwork and one doesn’t even use paint. What both have in common are the persistent visual illusions they produce and the way they encourage the mind to discover simple, powerful forms among the complicated sensory data they present to the eye.

Hanging in the space at the top of the front stairs, “Outer Limits” projects something akin to the kind of turbulence that Bridget Riley made emblematic of Op Art in the sixties. The difference is that, where Riley painstakingly divided her canvas into geometric blocks of color, Heiss uses a technique closer to Jackson Pollock’s “action painting” to produce a layered vortex that, in the end, looks nothing like Pollock’s webs of drips and trails. What both artists share is the impression that what they’ve done is in any way simple, even automatic. In fact, just as Pollock built up the illusion that what he called “drips” (to suggest they were accidental) somehow coalesced into an illusionistic network that appeared to float in space—a space everyone but Clement Greenberg could perceive—so Heiss uses the structure provided by a rope, anchored in the canvas and used in place of a brush, to impose overlapping circular and converging/exploding patterns over a richly variegated, tightly controlled color array.

In “Outer Limits,” the central position of that vortex, high in the frame, makes it dominant, as if it were the source of all that matters. Moving it to an upper corner in “Aurora Borealis” diffuses its impact, the way the sun in a corner of the sky shifts attention to what it illuminates. “Simple But True” adjusts the balance between the radial and the circular, emphasizing the flat surface of the canvas. Tree rings and geologic time spring to mind. In fact, “Wood Pile,” with six interacting centers, and “Birch Bark,” with none, bring the metaphor front and center.

Heiss’s second experiment finds him drawing on the canvas with flammable materials that he then ignites, carefully monitoring the process until smoke and scorch become something. He’s not the first artist to paint with smoke, but his representations are specific the way Frank McEntire’s “First Response is by First Responders” (in the gallery upstairs) are not. The face “In the Crowd” comprises a superb impressionist portrait that walks the line between comedy and heartbreak with the best of them.

Heiss’s title, “Matisse, Look at This,” directly challenges his prior revolutionary fellow artist to see what further experimentation with color and form can do. “Sun Flowers,” on the other hand, has ventured too far from Vincent’s versions to invoke them directly: Heiss reinvents his own.

And the missing word in “Be There or Be ?” can be found in the image, itself.

Heiss is a restless artist: one who in a single show has traveled from substance to smoke and back again. A century ago, his friends might have taken up his ideas, the way circles of artists collaborated as Fauves, Cubists, or Surrealists. Unless that time comes again, the question will remain whether Rod Heiss continues to explore and solidify the breakthroughs he’s already made, or if he runs ahead in search of what more he can find.