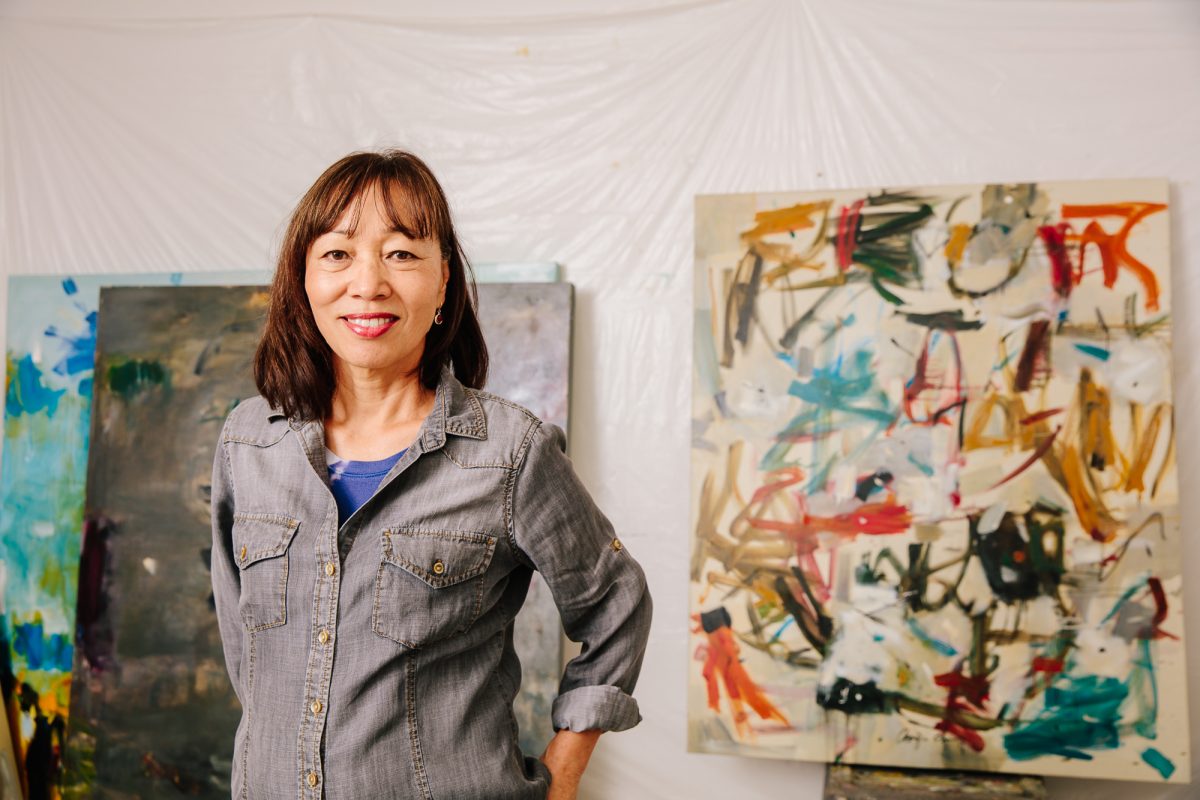 Oonju Chun in her new studio in Eden, photo by Simon Blundell.

During lunch at Kyoto, painter Oonju Chun asks, “Why do we say, ‘If I were . . .’ instead of ‘If I was . . .?”’ — one of those nitpicky English questions a writer hates to answer with “Ummmm . . .“ * But does. So, it was surprising to learn that Chun, who arrived  in Portland, Oregon, from South Korea at age 15 had begun her American education without knowing the language she now speaks beautifully. “I started school with not a word of English,” Chun recalls, “not a word. It was a huge cultural shock and the language barrier was a tremendous thing for me to overcome.”

Chun’s solo show at Phillips Gallery, up through Oct. 12, is a pleasantly dizzying presentation of her abstract work: mostly joyous splashes of color (primarily primary, and always in oil) recklessly daubed on a white canvas. A couple of her diptychs are standouts. “I prefer to paint on large-size canvases in a loose, painterly application,” she told me once.  “I have always found abstract paintings beautiful even when I was little and have been painting full time in this style for about [nine] years.” 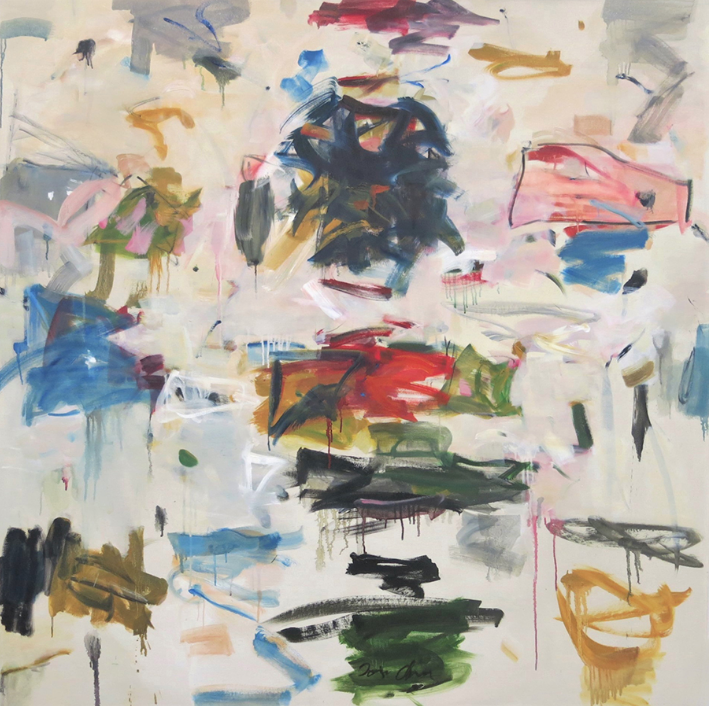 Her titles are evocative: “A Long Night and Cheap Wine” appears on one of just two “dark” canvases in the show. Then there are typically colorful works such as “Pink Taxi,” “Parallel Construction,” “From the Gut,” and “The Second Chance” which may (or may not) reflect her new life in Eden, Utah, with her new husband, Jim Morgan (retired from aerospace IT at ATK). Children from an earlier marriage include son Chris, a hip-hop music producer in Atlanta, and daughter Tiffany (who has gifted her with a grandson) who graduated from Parson’s School of Design in New York City and now lives in Seattle. They all are close and visit frequently. “When they were young, I was their mom, but now I am more their friend,” Chun says. “They are my favorite people in the world.”

Many relatives and Eden friends were at the Phillips’ opening reception and could be overheard admiring Chun’s abstract paintings and noting what they spotted in them, animals, mostly. “They think they see things in my work,” the artist said quietly with an indulgent smile. “Of course, I just paint what I feel – there’s nothing to be ‘seen’ there at all.”

She likes to look at her work for a long while (this can be years) “even when the actual painting is pretty much done. This allows me to really let the piece sink in and gives me time to make sure I am quite satisfied with the way it speaks to me. Quite often, I have returned to older pieces and reworked the images to my satisfaction,” says Chun. “Reversely, I have paintings of which I was not too excited about at the time of completion and, two years later, I take it out and look at it with fresh eyes and really like it.”

Chun, 61, grew up in Pusan, South Korea’s second-largest city, a port town, where her parents were merchants, owners of a number of businesses – Chun particularly remembers a jewelry store. It was an upper-middle-class upbringing, she recalls. “I grew up kind of shy and very sheltered, one of six kids,” she says. When an opportunity arose for her to immigrate to the United States, her parents agreed that she should go. “They wanted me to be educated in the U.S., so cheerfully sent their youngest child off across the ocean for that purpose,” says Chun, only somewhat sarcastically. An older sister had made the journey years before, married an American and was in a position to act as her sponsor – a requirement of U.S. Immigration. She also served as young Oonju’s legal guardian. (Eventually, over many years, the large Chun clan would emigrate from Korea to the States through the slow process of one family member sponsoring another; one sister remains in Seoul.) After spending two months in Portland, just before Thanksgiving in 1972, Chun found herself living in Salt Lake City. 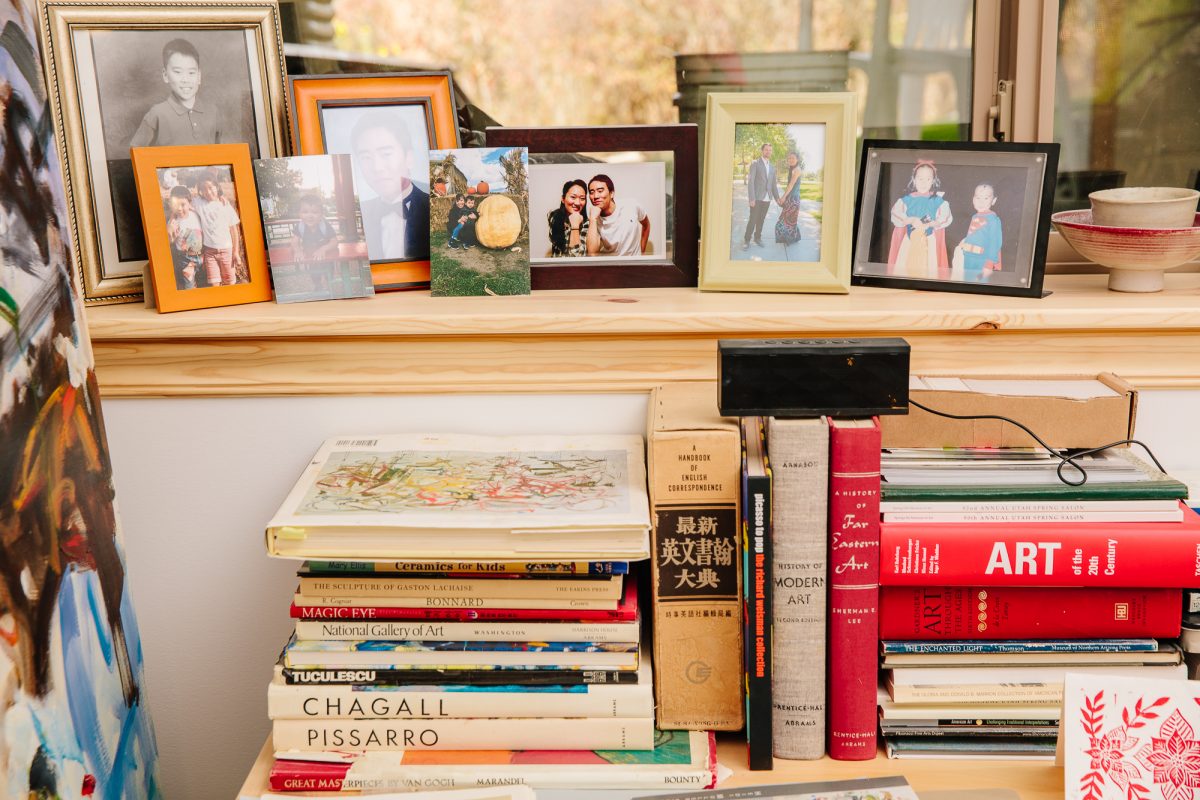 She finished school at Cypress High in Magna, then went to the University of Utah and studied fine arts, “basically painting and drawing,” primarily under Doug Snow and Paul Davis with classes from Sam Wilson, Maureen O’Hara [Ure], and Dorothy Bearnson.”I also studied under Angelo Caravaglia,” she adds. “I remember his work and that he had a really husky voice.” She recalls well the day he asked her and a Caucasian male in the class to come to the center of a circle of students so he could demonstrate the relative roundness of their skulls.

“I loved Doug Snow’s class because it was ‘paint whatever you feel like painting.’ I still struggle with, ‘What do you want to paint on that blank canvas?’ Once I start on it, then I kind of find its voice. So I spent a lot of time looking at art books of the Expressionists. Sometimes I would set up a little still life in class and paint that. I still have one of those that Doug Snow came by and adjusted and did a lot of work on. I had a line of green on the bottom and he came by and put a little line of pink on there and it pumped everything up, and that was really good to learn. That you don’t really have to follow the exact colors, you can be a little more creative with it, even in still life.” She says she tries to remember to “attack” the canvas because “that is when my paintings come alive. Whenever I see myself picking at a small area I try to remember to attack instead and, indeed, that is when the painting finds its stride,” Chun says.

She got her BFA and landed what she considered a plum job working at the Salt Lake Art Center in the ‘80s. David Sucec was there; John Schaefer taught photography. “I loved that environment. Then I met my ex-husband and moved to the East Coast and settled in the suburbs of Washington, D.C. Once the kids were grown and in high school I wanted to pick up my brushes again and I set up a little studio in the corner of the garage.” Chun was in her mid-40s by then and at a turning point in her life. “I was a suburban soccer mom for 30 years. Now I wanted to live, to paint.” Eventually she would obtain a divorce and move back to Salt Lake City “because it always felt like my American hometown.” 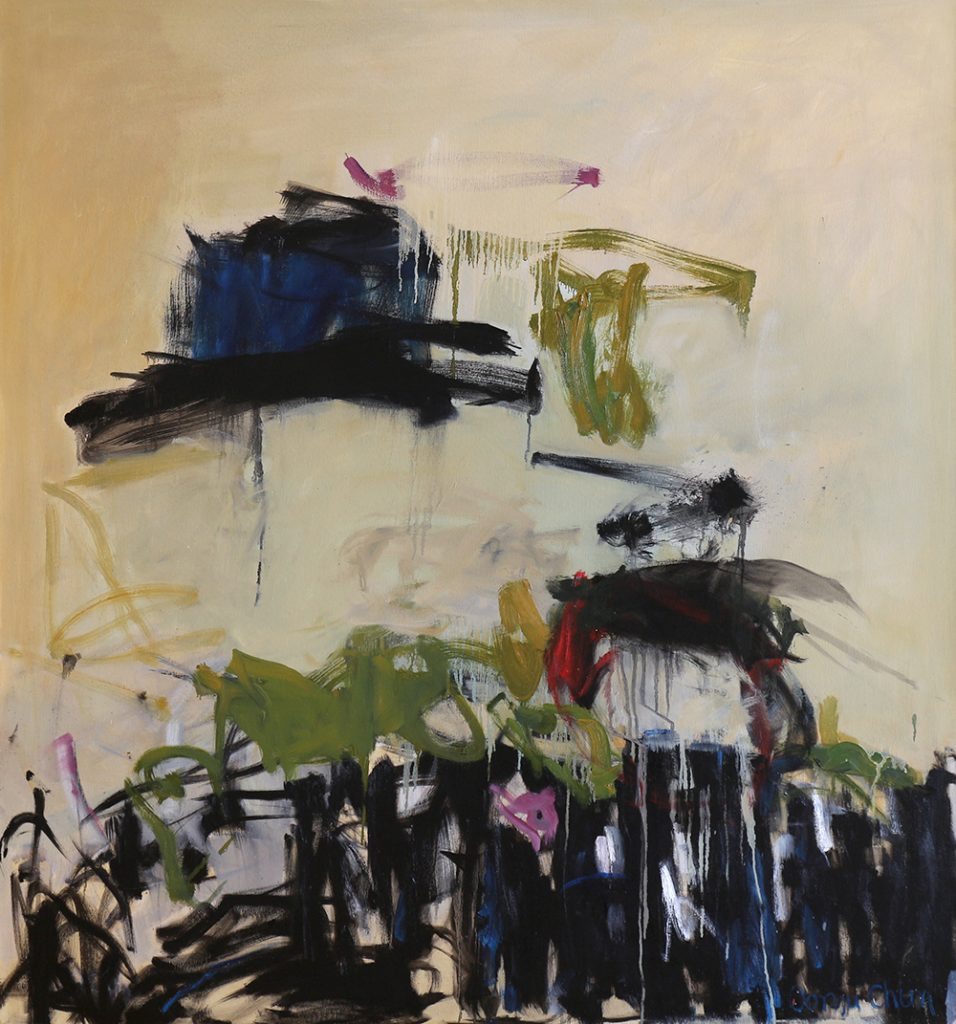 In this 2012 work, “Candy Divinity,” Chun’s brushwork coalesces into masses rather than spreading across the entire canvas.

Eleven years ago, Chun got back into the Utah art scene, found studio space near Brickyard in a building owned by an out-of-town brother, and knocked on a lot of gallery doors with no luck. Then someone from Phillips – where she had made several futile attempts — saw her show at Finch Lane and the gallery signed her.

As Phillips Gallery director Meri DeCaria recalls it: “Oonju sent me a hand-written note inviting me to see her Art Barn show in 2012. I was really hopeful that her work could help fill the void that Lee Deffebach’s passing left us with in 2005. We needed an abstract expressionist painter who knew how to lay down color with confidence and enthusiasm. Needless to say, her paintings knocked my socks off and when I presented them to everyone at Phillips, the verdict was a snap. She became part of our stable in July of 2012.

“The mood of her work is different than Deffebach’s, but like many notable abstract expressionist artists, Oonju Chun’s work delightfully employs the basics of good, nonobjective communication. Her sophisticated brushstrokes energetically convey a sense of balance and chaos. The scale of her work allows one to be immersed by her vaguely Eastern sensibility. An awareness that is possibly due to her consistent use of black gestures which provides a sort of foundation and gives her color dynamic energy,” DeCaria says. 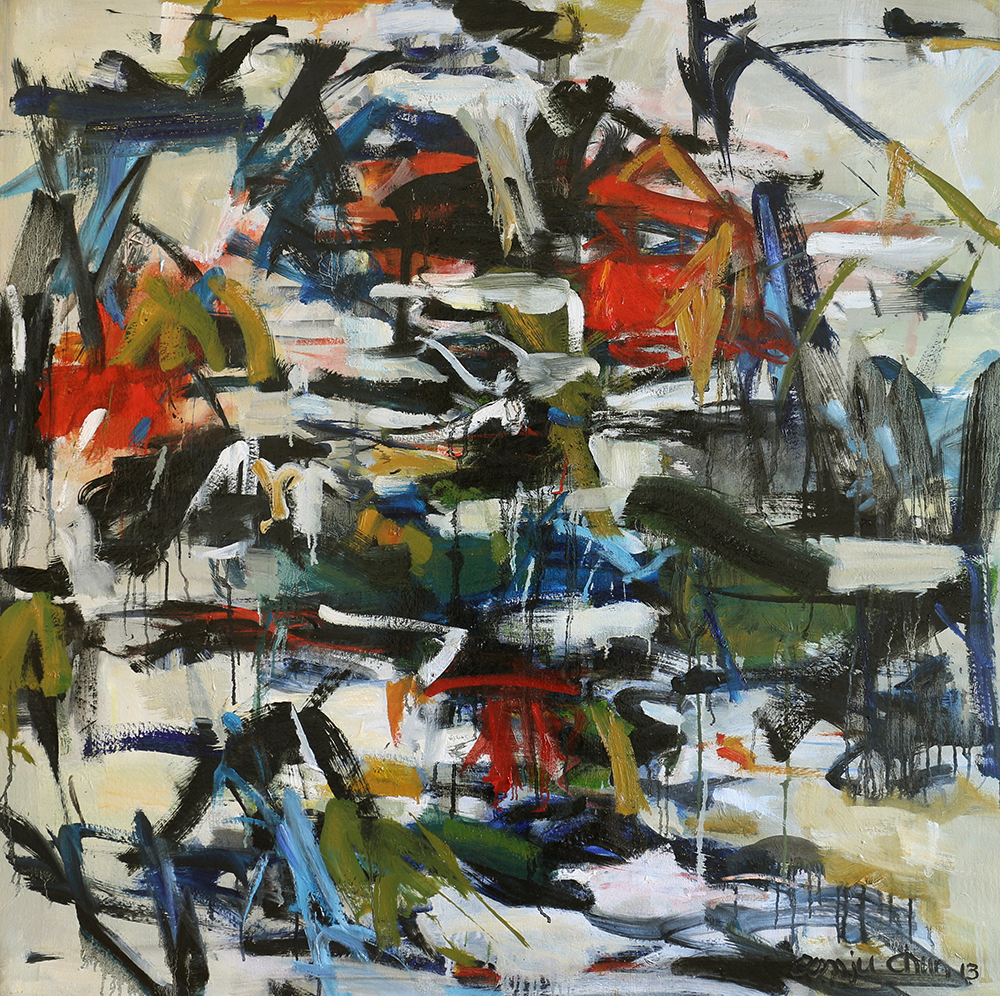 When her brother decided to rent out his building, she went to Baldwin Radio Factory in East Millcreek looking for a new home. Spotting a man in the parking lot who looked like he might be the owner, she walked up to Kevin Flynn, grandson of the legendary Don Olsen, and introduced herself. He said nothing was available but he would let her know if anything came up. About 10 minutes later her phone rang; Flynn had checked her out online: “I love your work,” he said, and compared it to Olsen’s. He said a space would be opening up and Chun could move in. (Don’t know what Tenants Rights would think of abstract artwork as a prerequisite for housing, but hey, it’s a sort of credit check.)

After three years in what she terms the ‘perfect’ studio, she met future husband Jim Morgan. Problem was, he lived in Eden and Chun had to resort to Google Maps to even know where that was. “I always like that city vibe,” she says, “and this was going to be a big adjustment for me.” Then, Morgan built her a new ‘perfect’ studio and she had to rethink Eden, she says, with one of her lovely smiles, as well as taking on a Malamute named Mishka who likes frequent walks. 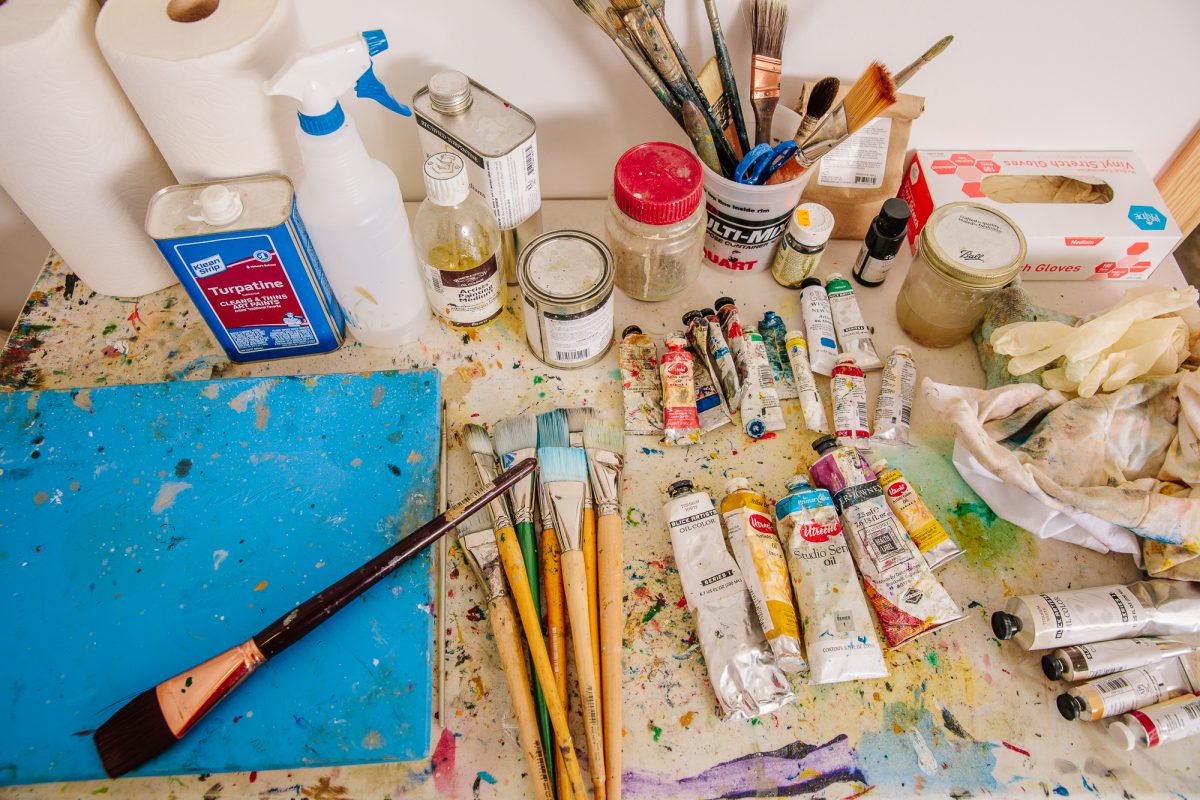 The studio comes replete with a powerful new sound system located in the ceiling so she can listen to everything from classical (“big symphonic, dramatic sound like Mahler, Beethoven, more than a tinkling sound like Chopin”), to blues to bossa nova-type jazz turned up loud while she paints. “I paint big strokes,” she notes.

She spends at least an hour in her studio every day, even if it’s just to thumb through an art book and ponder what she might paint next. Chun is always restless, constantly on the prowl for an experiment, for a new direction to take with her work. “I just go down to the studio and do something. I’m not one of those artists who wait for inspiration to hit me. I’m from a disciplined Asian culture. You do things,” she says.

* Artist Toni Youngblood piped right up over lunch with a pretty good explanation, but not so good as one in Grammar Girl’s Quick and Dirty Tips for Better Writing: Use “was” to refer to the past (I was at Poor Yorick studios.) and “were” to reference things that are wishful or not true (If I were rich, I would buy a Rothko.). Yes, dear reader, for a sentence in the subjunctive mood.