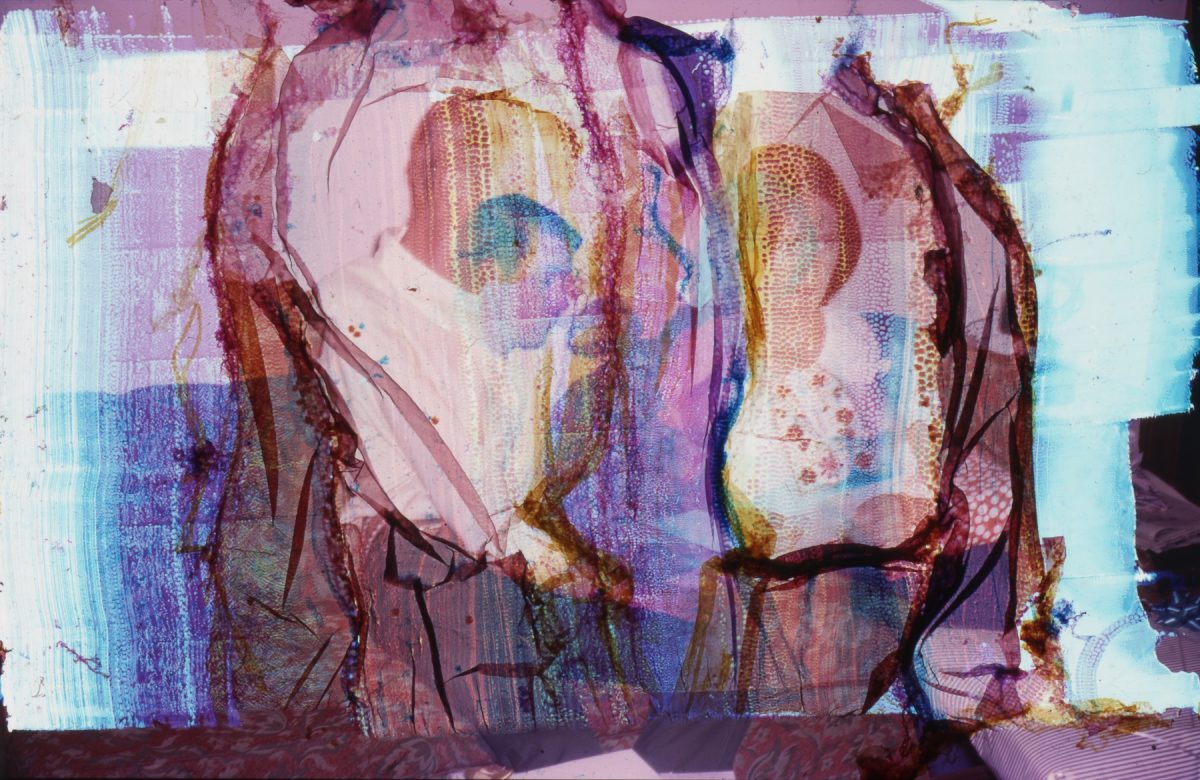 When presented with a scenario involving what to rescue in the event of a natural disaster, most people say they would choose their photographs. Why? What makes a photograph so important? The former director of photography for The Museum of Modern Art, John Szarkowski, curated an exhibition in 1964 called The Photographer’s Eye, where he argued one of the reasons photography is such a unique art form, different from all the others, is a photograph is how people remember. A photograph becomes the thing itself. It becomes a symbol of the event, a physical token to remind you of history, so we apply emotional connection and meaning to the object. This idea that a photograph is a precious document still permeates our culture, even though most photographs are now stored in a cloud, forever protected from a disaster.

With his current exhibition, Appendages of Sense, Justin Chouinard challenges the preciousness of photography by deconstructing the interleaving object used to store a photograph. Prior to the rise of digital photography, telephones with cameras, or the cloud, to record an event a shutterbug needed a substrate able to respond and capture light — a negative. The negative was the photo’s safety net: if the photograph was damaged, the negative could be used to reprint the precious object. In the case of slide film, it was the precious object. The negative captures the memories, becoming the ghost of the photograph, and the print is the body.

In his artist’s statement, Chouinard acknowledges the preciousness and falsification of the physical photograph, and the act of creating one. The shutterbug is a trickster. He states:

Among the alienation of family gatherings, in the celebrations and icons of hosting, cameras held by attendees served as eyes and recording devices. Staged moments and improvised gestures. Items seen worthy of acceptance by connecting posterity for them to contemplate and meditate on. For who are the ghosts present?

Negative and slide film is made of layers of gelatin with red, green, and blue dye dots. When projected, the light passes through, blending the colored dots together, like how you see a pointillist painting. With Appendages of Sense, Chouinard uses found negatives, separating the film layers, and allowing the viewer to see the dye dots, the multiplicity within the film, the folded gelatin, and the artist’s brush strokes. He lets those ghosts free. Then using the altered negatives, he prints a new body. In many instances, the ghosts are now duplicated in various proportions to each other. They sit behind, in front of and next to each other, almost mocking the original meaning of the photograph. The folds of the gelatin act like veils or shrouds being pulled back to reveal the afterlife. Some images have brush strokes or dye smears, showing how Chouinard helped coerce the layers of gelatin. Each image is also given a title to further force the viewer to read and interpret the new narrative. 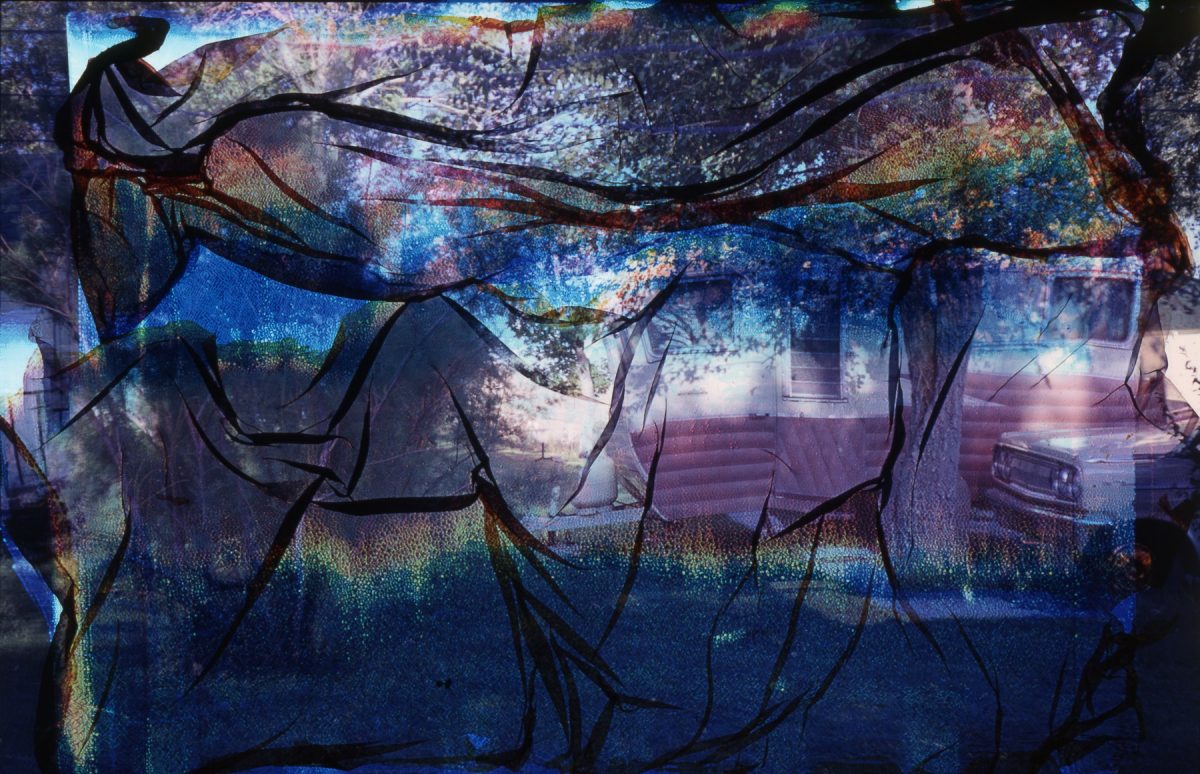 “Built by the Finches”

Several images in the series really illustrate each of these controlled and happenstance deconstructions. With “Built by the Finches,” the ribbons of crumpled gelatin create a silhouette of a landscape, or even a nest of some sort, resting on top of the imagery, which happens to be an outside scene of an old truck and small mobile home. The purple/blue wash in “Planted in the Weeds” has a horizontal movement that is haunting. You can’t help but stare at this unnatural color as it blurs the subject. The motion and color do not necessarily denote weeds, but the image of a young man in dress clothes posing in a yard is very familiar. We have all seen prom photos or been to a wedding where this act has been required. The crumpled-up ribbons of gelatin are washed over with yellow/green horizontal brush strokes. The feet of this young man are firmly planted in his pose, hiding or sprouting from the brush stroke bushes.

Within a couple images, “Day Park,” and “Playing Changes,” the viewer can really see the dots of dye. “Day Park” is a photograph of a shoeless woman, holding something, while walking in a park. You can also see a volleyball net in the background. When you look closer, you start to see the duplicate views of her face and legs, separated from each other and larger than the other image. The dots and subject matter remind the viewer of Seurat’s famous pointillist masterpiece, except in Chouinard’s image there isn’t someone walking a pet monkey. In “Just Won’t Stick,” it looks more like the dye reticulated as it dried within the brush strokes. The reticulation is resting on the faces of the two people in the image and really helps emphasize the materiality of the original negatives and how Chouinard didn’t have a lot of control while the manipulated film dried. However, the clever title clues the viewer into Chouinard’s understanding of his materials and their nature. He can only do so much and then let the ghosts inside do what they want. 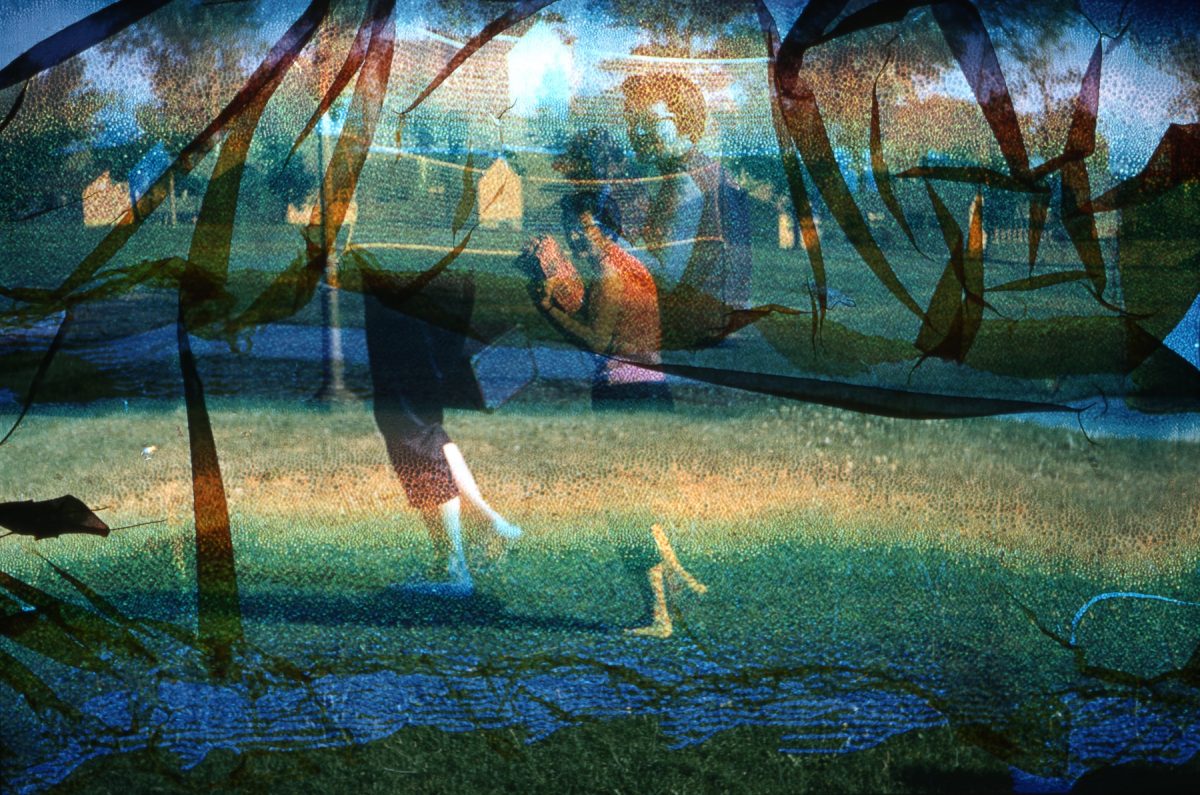 In presenting his 14 images, Chouinard has shown intelligence and respect toward the overall meaning of his series: first, in his choice of using found or secondhand frames; second, the scale of the images in relation to their frames; finally, the matting and placement of the image within the frame. The glassless frames have wear and tear, with chips, scratches and gouges. Normally, photographs in a gallery are framed under glass to protect the image, reinforcing its preciousness. These frames denote images you might see in the hallway of your great auntie’s house: they have taken some abuse over the years, but still hang proudly on the walls, gathering dust and fading. Without the glass, the viewer is also able to examine the images more closely. This intimacy with the image makes the images precious, again, even though everything about their presentation says otherwise. One image, “The Hats Are Eyes,” is in an old mirrored frame, forcing the viewer to address the image while seeing themselves in the frame. Another piece, “RT,” showing the image of a boy and his horse, is framed using old shipping palette wood. It is rough, natural, and innocent, just like the photograph it houses.

Chouinard’s use of scale for each image helps drive home the new narrative for each of them. The largest print in the exhibition is roughly 9” x 12” but many of the images are small, wallet-size images, the way we used to carry our images around prior to the smart phone and the cloud. When framing a photograph, the size of a print usually dictates the size of the mat and frame: if you want an image to have more prominence on a wall and the photograph isn’t a large print, you use a larger frame. For one image, Chouinard’s clever use of print scale and framing really draws the viewer in. “Gwen,” is in a dark red frame, around 24”x18” with a small 7”x5” print. The photograph has gold ribbon brush strokes of dye over a small image of a face. The large scale of the frame in relation to the size of the image really is reminiscent of Warhol’s “Gold Marilyn.”

“The Unluckiest of Them All”

“Lost and Used Up”

The placement of an image within a window-matted frame usually has set rules. When cutting the mat opening, you normally add a little more mat to the bottom to create optical weight and make the image look more centered in the frame. Chouinard has chosen to alter these rules in three images. “The Unluckiest of Them All,” a small scaled image showing a gathering of people, is matted with a black mat in a small black frame, the image placed near the bottom of the frame, creating a heaviness to the larger field of black mat pressing down on the image. One can’t help but think of a funeral when looking at the image. “Lost and Used Up,” an image of three women sitting at a long banquet table, the one closest in a hat, is similar. Is the scene from a special event, birthday or wedding? Again, Chouinard chose to frame the small image in a black frame with a black mat with the image on the right side of the frame, making the viewer think of a funeral, but the expressions on the faces of the women states otherwise. “Iceberg” features two photographs, identical except in color; the top one has more of a cyan tint, while the bottom one is more magenta. The shape and size of the frame is long and slender with two windows cut closer to the bottom in the light tan mat. The clever title suggests why they have been placed in the bottom of the frame: just like an iceberg, there is more lying beneath the surface. The top photograph represents the persona of the subjects, and the bottom is the true self. The true self always floats below the surface and every now and again, flips over to reveal itself. Sometimes, in an ugly magenta-like destructive way.

Through chance, well-thought-out destructive acts, printing and framing, Chouinard has given these film ghosts new narratives. Separated, released, transformed, and free from their previous stories, these new prints provide intimate connections for all, not just for the future familial generations the original shutterbug intended. Chouinard guides the viewer down a precious experience by combining clever titles, scale and framing. We delve into these colors, shapes, textures and forms to relive and see our family traditions, events and histories. They are no longer precious images for the initial intended family to contemplate and meditate on, they are ours. They are now our ghosts.

Appendages of Sense, photographs by Justin Chouinard, Finch Lane Gallery, Salt Lake City, through Sept. 21, 2018. Also showing: I’m Floating in a Most Peculiar Way, installation by Trent Alvey, gallery talk with Alvey and Bonnie Baxter on Extremophiles on Mars and Why I’m Working with NASA at the Great Salt Lake,” Friday, 9/14. 7 p.m 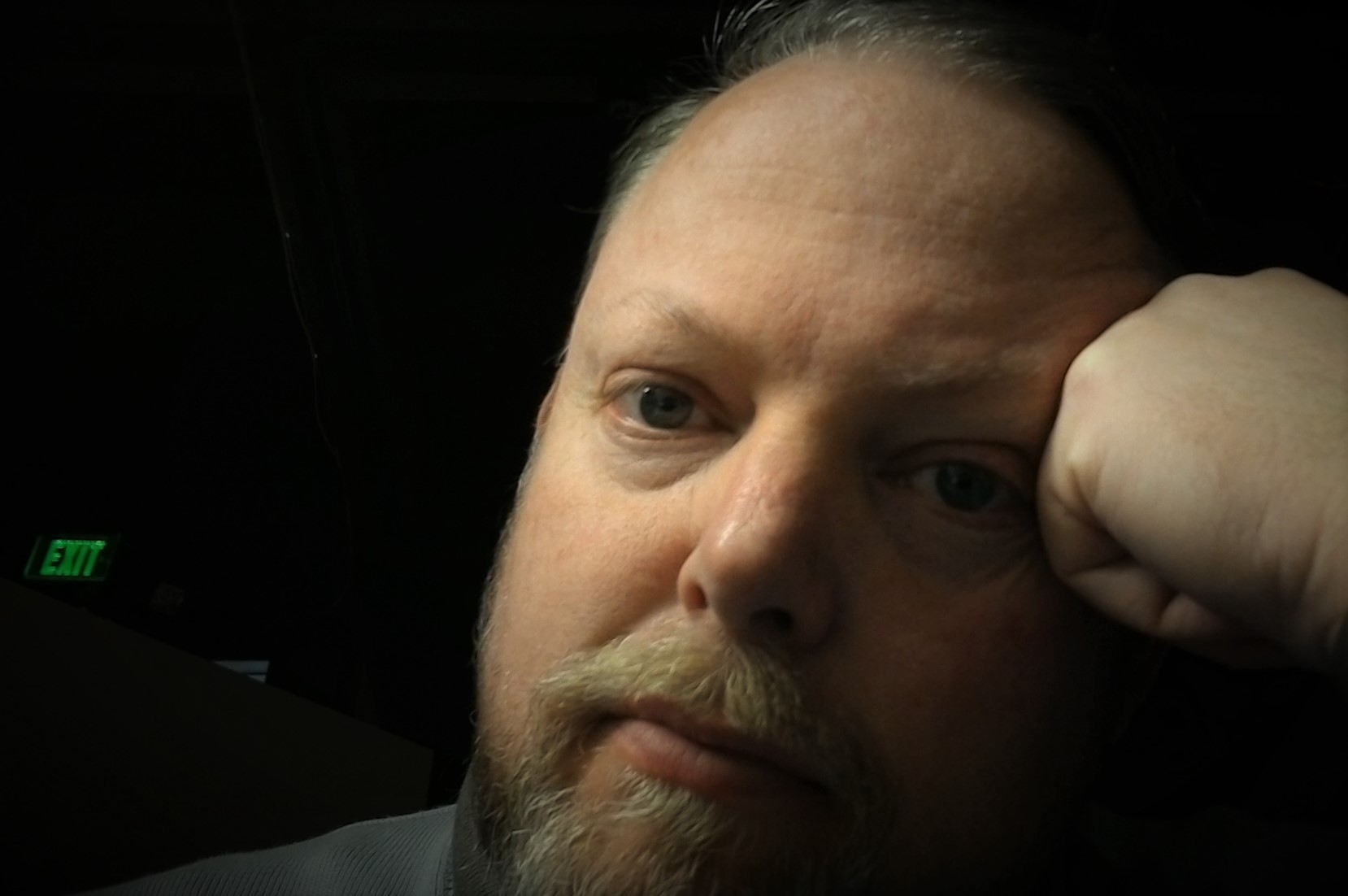 Lewis J. Crawford is a mixed-media photographer/artist based in Salt Lake City, UT. He is also an Assistant Professor (Lecturer) at the University of Utah, teaching courses in photography, new media writing, and digital art.