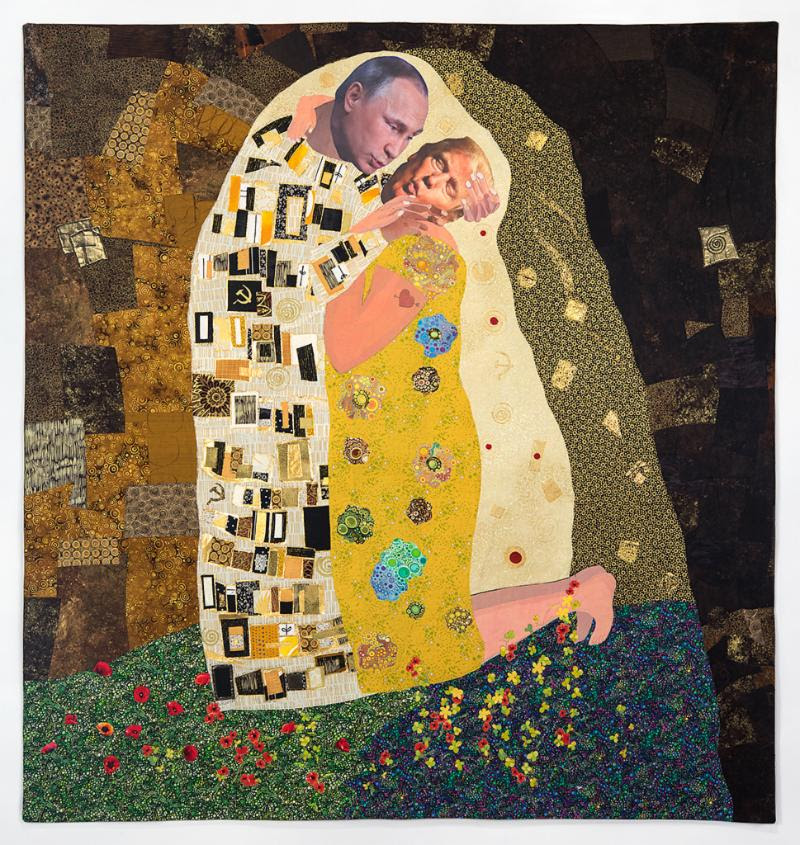 Utah will be host to at least four major quilt shows in 2019. Is this the best one?

Technically, it’s not a quilt show. Things That Matter is a “fiber art” exhibition. With one or two exceptions, however, these works are quilts, ones that, as the show’s subtitle indicates, have “purpose.” A traveling exhibit that began at the Visions Art Museum in San Diego, then moved to Chandler Center for the Arts in Arizona before arriving on the second floor of the St. George Art Museum (through July 6), Things That Matter: A Fiber Art Exhibition by a Coalition of Artists with Purpose presents a varied collection of works by 31 self-described “artist-citizens” who excel at but go beyond the craft of their medium to address contemporary issues. 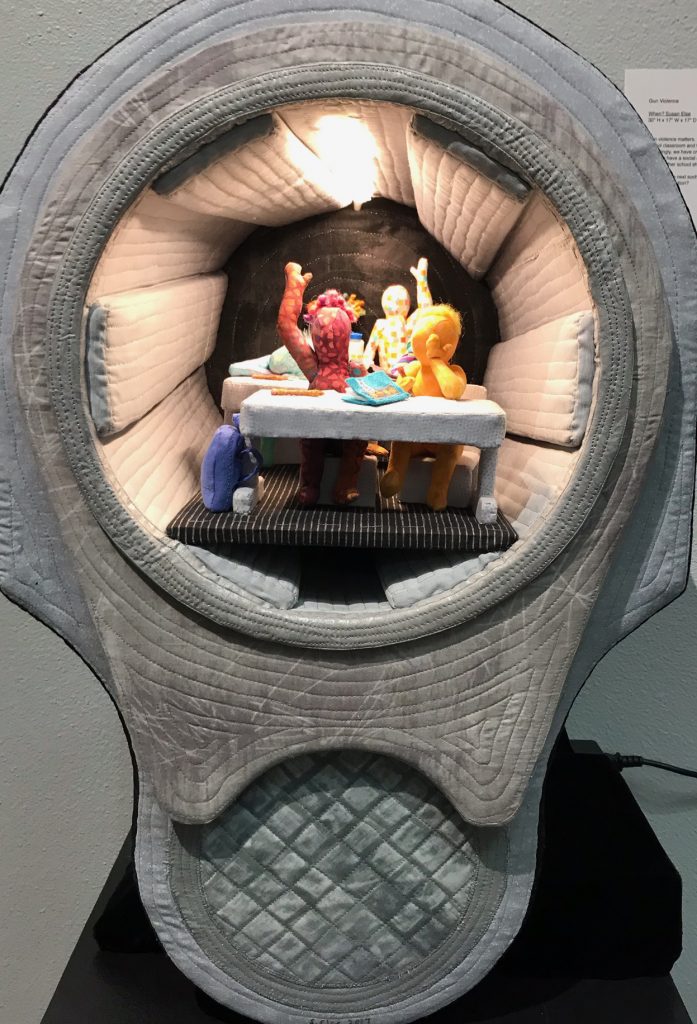 Some of these issues will be readily apparent: gun violence, in the case of Susan Else’s soft-sculpture “When?” — one of the few non-quilt pieces — in which the barrel of a gun is also a school classroom (it’s a wonderful piece, even though the transformation of cold, hard metal into fabric softens the impact of the juxtaposition somewhat); homelessness, in Dawn Williams Boyd’s depiction of a family of five sleeping rough, the children reading books by flashlight; and women’s rights, in one of the least forgettable pieces, Kathy Nida’s “Not Less Than,” where a female figure with her heart and lungs visible cradles a baby, while out of her head, hydra-like, sprout five smaller female figures — each juggling an occupation — while cats, spaceships, celestial bodies, an ERA tattoo, snow-capped mountains, fiery depths and a scroll that reads “I am woman … hear me roar” fill out the remainder of the composition. 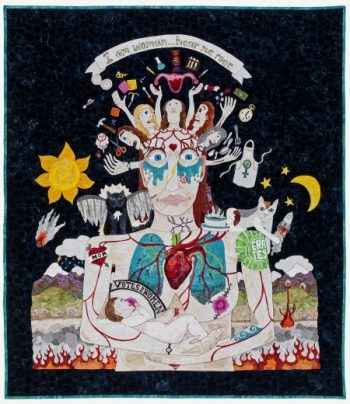 Some works are very topical, like Sandra Poteet’s “Truthfulness,” which addresses what has been called, since 2016, the “post-truth” era; or Alice Beasley’s “From Russia with Love,” where the heads of Vladimir Putin and Donald Trump have been placed into Gustave Klimt’s “Kiss.” Others are more general, like Sandra E. Lauterbach’s wonderfully detailed piece on the lessons of history, which combines the Trojan Horse and Egyptian Sphynx with the Nuremberg trials, Civil Rights marches and Ethiopia’s Haile Selassie.

But in addition to these more apparent, issue-driven works — which certainly would stand out in your average quilt show — there are others that would feel more at home, like Elena Stokes’ sunset over a lake, Sheila Frampton Cooper’s brightly colored tropical fish or Bonnie J. Smith’s patchwork design. Sometimes, it can feel like pieces are being constrained or overloaded with “purpose.” As we read in the exhibition notes that have been provided with each work, these pieces are — respectively — about the need for peace and quiet, species extinction and water issues. Rachel Meginnes’ deconstructed quilt, with its painted-over pieces of dissolving patchwork and batting, is one of the most visually compelling pieces in the exhibition. How well it addresses the “eroding away [of] one’s liberties” is less compelling. With works like Joan Schulze’s homage to Agnes Martin and Georgia O’Keefe categorized under “Role Models,” or Susan T. Avila’s “Time To Relax” under “Health and Well Being,” we seem to have strayed from what is implied by “artist citizens” working with “purpose” — a framing that implies dealing with pressing issues that call for action and involvement. 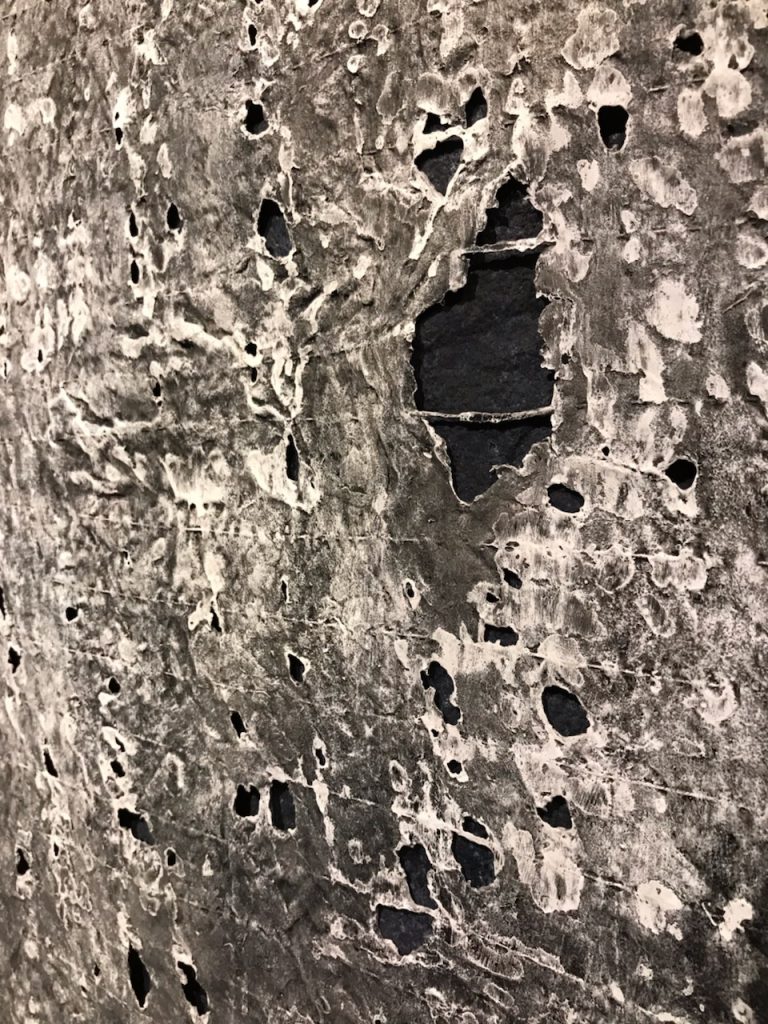 Since the individual purposes of these artists are hydra-like, branching out in so many directions they risk toppling over the collective, a more narrow selection might have resulted in a tighter, more pleasing show. But a collective purpose is apparent from this exhibition — to demonstrate that quilting (or, if you will, the fiber arts) is not simply a craft or formal exercise, that artists in a quilt exhibition can have as much to say as those in an exhibit of paintings, photographs or sculpture. And for that reason, whether or not it’s the best, this may be the most important quilt show of the year.

Things That Matter: A Fiber Art Exhibition by a Coalition of Artists with Purpose, St. George Art Museum, through July 6.