Fem Dance at the Fringe Festival 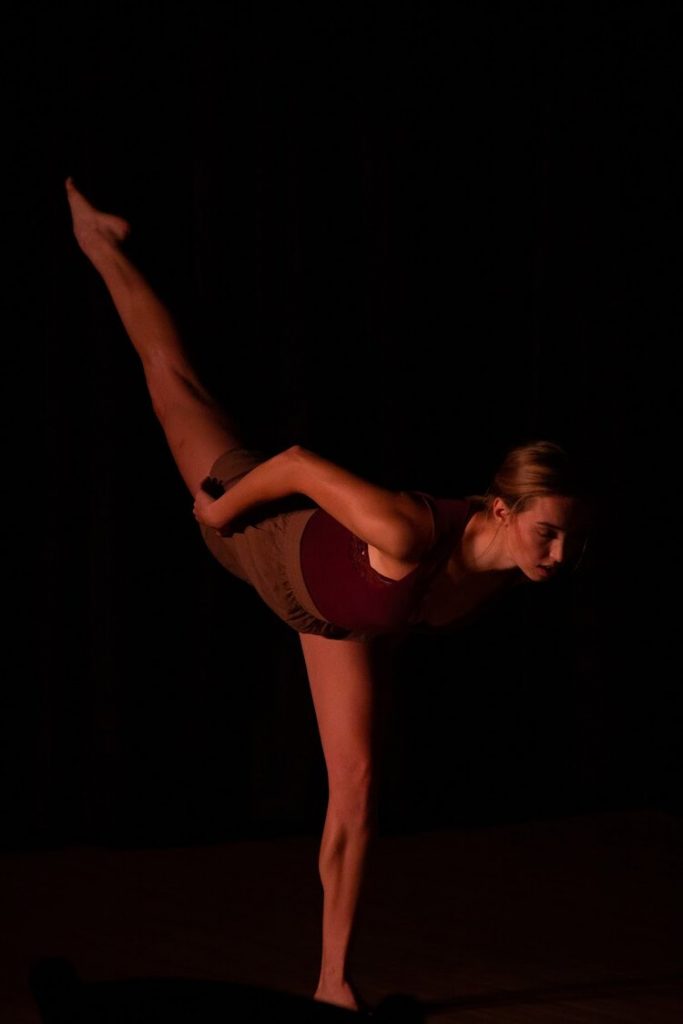 Home Bass was a twenty-minute work featuring five female dancers — Ruby Cabbell, Jorji Diaz-Fadel, Christi Harris, Nicole Smith, and Becca Speechley — all of whom shared an expansive, soft movement quality. After having consumed so much virtual, separated art, it was refreshing to witness these company members move with such a connection to one another.

As described by company director Alicia Ross, Home Bass was an exploration of humans’ innate attraction to heavy bass music. Ross explained that this comes from our connection to the low frequencies of the heartbeats and voices of our mothers when we are in the womb. While this was quite an interesting concept to have in mind while watching, the show didn’t necessarily explore this thesis.

The dancers did indeed feel a deep connection with the beat of the music. They moved with a soft heaviness that felt in line with the low frequency music and warm, moody lighting.

The first section featured a heavy, constant beat. The dancers began in a pile on the floor and moved together in an amoeba-like state, then began moving in and out of syncopated unison. They moved beautifully as a cast, but some of the unison felt out of place. I found myself longing for a lengthier exploration of the heavy, abstract movement they’d found in the beginning.

When they seamlessly transitioned into the second section, that’s exactly what they gave. With an extended, tranquil bass sound, they returned to the investigative, slow movement while one dancer drew attention with a more precise, repetitive movement vocabulary. Throughout, each dancer moved in and out of this shared vocabulary. Something clicked choreographically. Transitions felt natural and the brief moments of unison were exciting. What really drew me in here were the moments when the dancers were authentically looking at one another.

The intensity increased immediately at the start of the third section. A stronger bass, stark red lighting and the most powerful movement so far created a distinct shift in energy. This piece featured mostly unison work and dipped further into the world of recognizable shapes and technique. It was beautiful to watch the group move together with such strength, but I would have loved to see motifs from earlier in the show return.

The company went for a bookending approach, finishing in the same pile on the floor that had opened the show. Though perhaps a predictable choice, I found it satisfying visually and conceptually.

Fem Dance Company is a group of well-trained, cohesive, passionate artists. In Home Bass, they began to explore movement and themes beyond what they’re used to. It was an authentic push to find new ways to move and express. In this innately uncomfortable process, they filled some of the gaps with moments of clear and comfortable choices from their technical backgrounds. Sometimes this led to a sense of displacement or abrubtness, but it also demonstrates their eagerness to combine multiple worlds of movement.

Staying true to their purpose

Ross shared that Fem Dance Company’s central intention is to represent and empower women. Home Bass did just that. The show gave the female company members a space to explore their edges, discover new ways of expressing and create art together.

I was left inspired by their vulnerability and wanting more.

Elle Taylor is a BFA candidate at the University of Utah’s School of Dance.