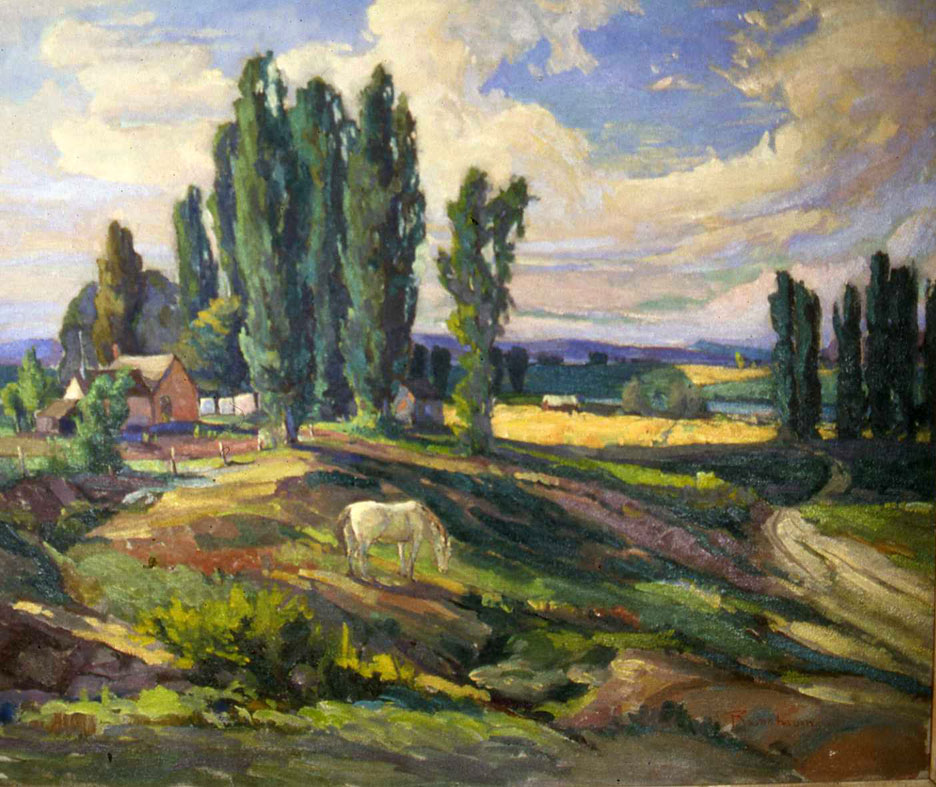 During the past few months, I must have had an average of ten phone calls per week either telling me who to vote for or asking my opinion about the important matters of the day. One of those important matters, as evidenced by frequent references, was the idea of a “bailout,” and I have been thinking about that word ever since. My phone has, gratefully, stopped ringing, but I’m curious why no one wants my opinion now. I suppose the campaigns never did want my opinion — they just wanted to know if I were voting for their candidate and if I supported a bailout so they could decide whether or not they should beef up their efforts in Federal Heights.

“Bailout” is an interesting term. Dictionary.com offers one definition: “the act of parachuting from an aircraft, esp. to escape a crash, fire, etc.” I imagine a lot of my fellow citizens like that definition and would love to see a bunch of car executives, bankers, and investment managers hop on a plane and bail out at 30,000 feet — with no parachute of course. An alternative meaning is “to offer assistance to someone or a group of folks who have been impacted by a disaster.” Those of you who are artists have likely been hit hard by the economic downturn. If someone were to call and ask my opinion now regarding what to do about bailing out artists, I’d suggest they refer to the federal art projects of the 1930s as precedents.

Seventy five years ago, in December, 1933, the Public Works of Art Project (PWAP) was established by the Roosevelt administration, and early in 1934, ten Utah artists and projects had already been identified. Most of the artists selected were those about whom I have written in previous 15 Bytes columns: Lee Greene Richards, Ranch Kimball, Henri Moser, Gordon Cope, Florence Ware, and J.T. Harwood. 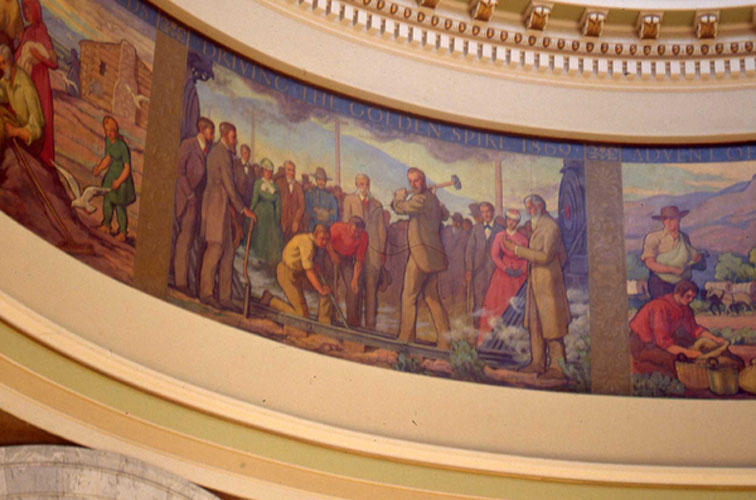 The pre-eminent work was assigned to Richards, who along with four or five others would be painting images on 4,500 square feet of canvas for the capitol rotunda. The work was primarily created on the floors at the state fairgrounds and then affixed to the capitol dome. The massive murals, recently restored during the Capitol renovation project, depicted scenes from Utah’s historical past. In his book, Utah Art, Robert Olpin mentions a conversation he had with Waldo Midgley in 1983, in which he asked “if this great public works project were an enchanting experience …” Midgley’s reply was ‘No! … It was a pain in the neck! Lee Richards was the whole show. He just sat in his studio and made all the drawings, and the boys down at the fairgrounds copied them … All I did were the borders. I worked there for two weeks, and then I said ‘ah, to hell with this, I’m going to go painting!” 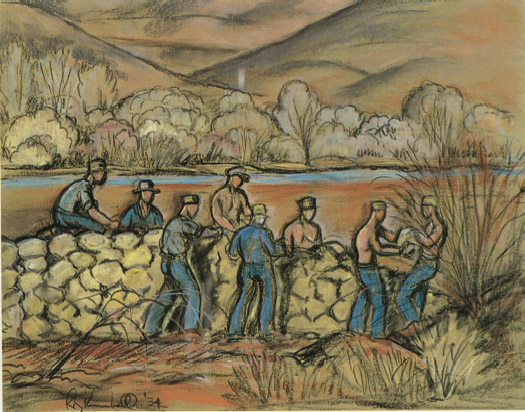 The most definitive work on Utah’s involvement in the several federal projects is “Utah Art of the Depression,” a catalog and essay written by Dan E. Burke, former director of the Salt Lake Art Center, who also penned his thesis about the same subject. In his essay, Burke discusses Helen Sheets and Taylor Woolley [an architect from the old 20th Ward gang of artists on the Salt Lake avenues] who were the project’s two directors. To those who questioned federal projects as “make work” measures Sheets said that although financed by the public work administration, these projects were not to be considered relief work. “On the contrary, it is the government’s attempt to ascertain what artistic material we have in America.” Utah, then and now, has had a history of rejecting assistance from the federal government. That pioneer “work ethic” thing sometimes becomes a hindrance to progress. In any event, the PWAP program was short-lived; early in 1934, it was replaced by the Federal Emergency Relief Administration [FERA]. These projects came under the direction of Judy Farnsworth Lund, a talented artist and able administrator who was still in her early twenties. Her grandfather had been an eminent Mormon apostle and her mother and grandmother had both served on the LDS Church’s General Relief Society Board (the highest ecclesiastical position for women in the church), so she was continuing their tradition of volunteer service in relief programs by aiding the artists of the state (less traditional was her later decision to head off to New York to become an artist; she married Ted Wassmer and with him moved to Woodstock — before the hippy invasion but she was there for that too). 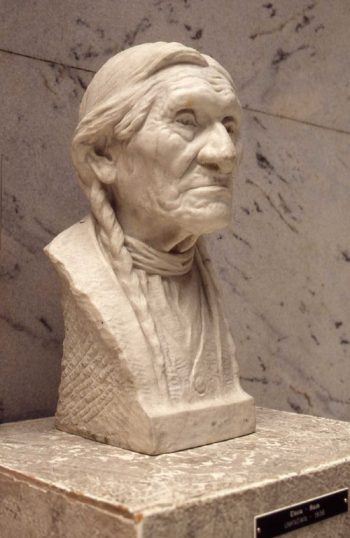 The completion of the Utah Capitol murals was arguably the greatest accomplishment of the FERA and remains a testament to bright spots on a depressing horizon. Master art conservator, Liz Provost, reminded me of a story about the project at the capitol. When at last the great murals had been mounted on the interior of the Capitol dome and the massive scaffolding dismantled, it was noticed that one of the workers had left an old paint rag on a shelf high above the rotunda floor. Rather than reassembling a lot of scaffolding, Gordon Cope, somewhat of a fly fisherman, usedj a fishing rod and use his casting prowess to retrieve the rag. Dale L. Morgan, editor of Utah: A Guide to the State [1941], reported that Cope “ … armed with a long fishing rod, spent the greater part of a day at casting before the undecorative [sic] object was landed.”

There were of course other lasting achievements as a result of the FERA. Millard Malin sculpted two Native American busts that remain in the Capitol building near the doors of the Utah House of Representatives. Ranch Kimball, as you may recall from a previous 15 Bytes column, followed and sketched the workings of the Civilian Conservation Camps [CCC], including the establishment of many of the foot trails in Zion National Park, rock walls to support roads, irrigation dams, and so on.|5|These drawings by Kimball plus others by Cope, chronicled early Native American life and culture in 1930s Utah. Edwin Evans created some removable murals for the Veterans Hospital (and apparently somebody removed them), and Henri Moser painted a triptych depicting the Wasatch Mountains (they vanished, too). Elzy Bird created thirty oils and watercolors for use in schools and other public places including “Ali Baba and the Forty Thieves” at Salina Elementary School and “Stolen Ponies” which was originally located at West High School. Sounds like he wondered how long his paintings would last through the decades. Carlos J. Anderson (Andreson) was commissioned to create twenty-four drawings depicting early Utah art (the Springville Museum of Art is holding a retrospective exhibition of his works this month). JT Harwood painted the two large murals, “Appeal to the Great Spirit” and “The Departure of the Red Man” that continue to hang in the Union Ballroom at the U of U (see 15 Bytes column about Harwood). The list of participants in FERA reads like a “Who’s Who in Utah Art” book. Everett Thorpe, Irene Fletcher, Torlief Knaphus (subject of future 15 Bytes column), Roy Butcher (Bill Seifrit’s favorite), Joseph Everett, and Florence Ware grace the esteemed roster of depression-era painters who participated in the government art programs. It was Ware who painted the huge murals on either side of the stage at Kingsbury Hall (see 15 Bytes). Cope and Howell Rosenbaum were the most prolific, each producing approximately 80 paintings as part of the projects. 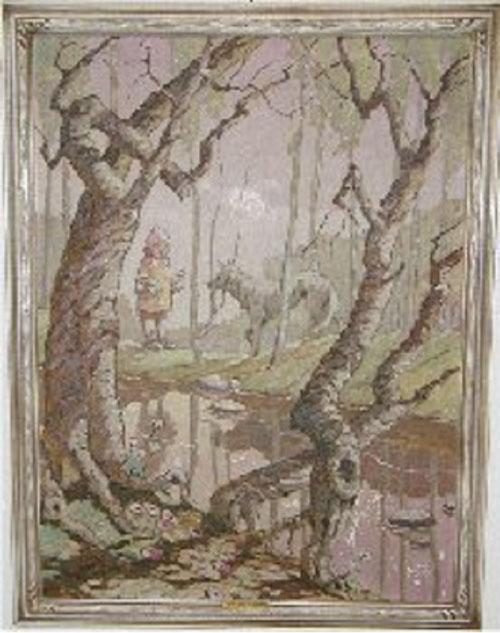 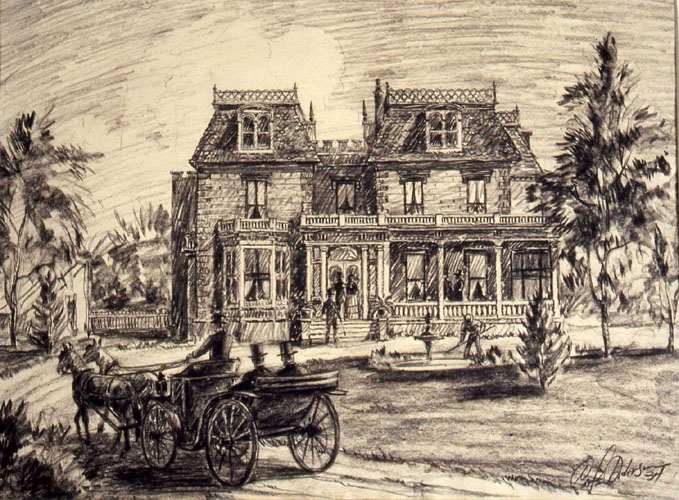 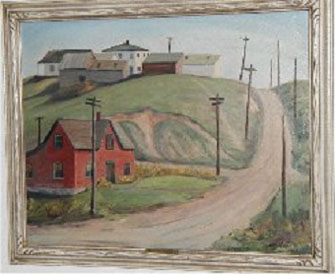