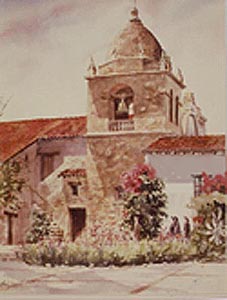 Watercolor painting of a California Mission church by Harrison Groutage.

Greg Stocks, a local painter, has fond memories of his late professor Harrison “Grout” Groutage, who passed away on February 5 at the age of 87. In the mid-80’s, Stocks took a watercolor class from Groutage and found himself in the instructor’s office for a personal critique. “I was painting a stone house or something,” says Stocks, who was having trouble with a technique to capture the rocks in the right way. “Groutage started looking around and said ‘hang on a second and let me show you something.’ He didn’t have his watercolors handy so he dips his brush in coffee and did a painting. His painting with coffee was better than what I’d done with full watercolor.”

Groutage, who was born on April 21, 1925, developed a strong reputation as an excellent teacher at Utah State University (USU). His journey to become a professor started when he ventured away from his hometown of Richmond, Utah and went to earn a BA from Brigham Young University (BYU) shortly followed by an MFA from the University of Utah. Then Groutage returned north and began a 32-year-long career with USU, a decade of which was spent as the head of the art department. As a teacher, Groutage was known for encouraging his students to escape from the concrete walls of the classroom to get outside where they could immerse themselves in nature and hone their craft. Stocks says Groutage was the first professor to take him outside to experience plein air painting.

Groutage also had an eye for understanding composition. “He could walk up and take a look at your piece and say, ‘let me just do one thing,’ and put one mark on your painting that showed you what it was you were missing. It was a revelation. I recall that happening a couple of times. His ability to see those things was remarkable,” Stocks says. While he explored other themes in his work, Groutage’s depictions of the west became his signature, and in the December 2002 edition, a 15 Bytes writer observed, “But it is the Utah landscape Grout loves. His moody northern Utah skies and stately interpretations of the red rocks of southern Utah have become the standard by which Utah landscape painting is measured.”

While Groutage is no longer with us, he leaves behind an amazing collection of work.“I’m sorry he left us but he left us with some good paintings,” Stocks says.