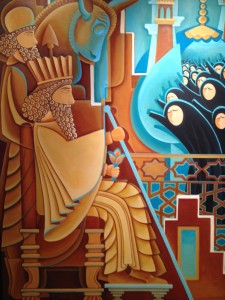 Reaching for Liberty by Fahimeh Amiri

In Fahimeh Amiri’s “Reaching for Liberty,” Darius the Great, ruler of the Achaemenid Empire, is seated on his throne in Persepolis, the center of Persian power. He is represented in monumental scale, in the abstracted two-dimensional side view profile of much of the art of the ancient Near East, rendered not with illusionistic depth, but with a flattened geometric style that emphasizes his presence and stature.  Above Darius is the personification of a god in the form of a bull.  An attendant with a spear stands behind Darius with similar imposing features.  In this area of the canvas is a monochrome use of golds and brick reds.  The picture is sharply divided diagonally by Darius’ staff, which is a cool shade of blue.  On the other side of this is a throng of women.  But these are not the women of Darius’ day, a time of  “freedom and power” for Persian women. Draped in black, they are the women of today’s Iran, reaching, the artist says, “to the ancient king to claim a freedom that once existed.”  Unlike the abstracted traditional representation of Darius, these figures recede into a depth of space in the style of illusion synonymous with the new world.  The blue face of Mithras, the bull-God, looks down on them, as if he is aware of and compassionate with their plight.

Amiri’s current exhibit at Salt Lake’s Finch Lane Gallery, which opens this evening, features a number of similar works, inspired visually by the artist’s rigorous training in Persian miniature, and thematically by the struggles of women in her native country. One need only acquaint oneself with the historical subject to be completely at home with these approachable paintings and explore the wealth of symbolism and meaning embedded in these works of rich color and bold graphic detailing.  Amiri’s art “encompasses the subject of Islam and its influences on Iranian women with glimpses into their psychological and social relationships to Islam,’’ which is made lucid through meaning and metaphor in these rich narratives.

Finch Lane is lined with narratives like “Reaching for Liberty,” testaments to the dynamic history and tradition of the Iranian woman that celebrate her while invoking a sense of sympathy with her challenged role in society today. Although her paintings cross several millennia, Amiri creates painted abstracted narratives that are beautiful and evocative to today’s viewer.  While in keeping with ancient aesthetic norms, contemporary viewers adjusted to the aesthetics of the 20th century and the art and traditions of those who borrowed from the East for aesthetic inspiration will not be caught off guard with this art made thus even more palpable to an art savvy viewer.