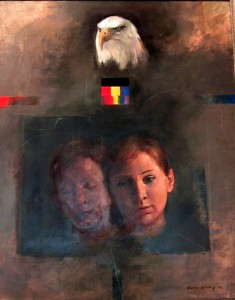 The current and exciting exhibit at the new A Gallery in the Sugarhouse area features the artwork of Trevor Southey and is provocative, new, retrospective and collaborative. This particular presentation is unique in that it is the result of collaboration and commission, creativity and entrepreneurism, awareness and fundraising. Those organizations and individuals that worked together to create this opportunity represent groups that do not often work together: large non-profit foundations, humanitarian interests, a private commercial art gallery, business individuals, artwork, the technology from university research, and an artist.

The principle focus of this exhibit and fund raising opportunity is a piece entitled “Eagle Eyes.” It was commissioned of Trevor Southey by Debbie Inkley in conjunction with The Opportunity Foundation, which provides opportunities, education, and employment for special need individuals. Recent project work by The Opportunity Foundation collaborates with Boston College’s Eagle Eyes Project. This project, through the use of computer and visual technologies allows severely physically-challenged individuals the opportunity to communicate for the first time. The painting by Southey portrays this transition from a world of darkness and isolation to one of light and inclusion through numerous symbolic images.

I have to admit the first impression I had of this painting was, “Well, this is very literal.” Southey tackled this concept right on when I asked about it. When asked about the symbolism Trevor explains, “It’s actually pretty simple. But, basically, it is a very difficult, challenging piece to do, because it gets really close to sentimentality. So, this is a source of distress to me. It’s something I fight anyway. I’m by nature quite a sentimental person who resents the fact that the lamb and the lion don’t lie down together. I think it is very uncooperative of them. So, I tend to be a romantic. This piece goes a step beyond that. So, I have had to fight it, and I think I’ve come close to winning the battle, so it says what I want it to say without being maudlin.” 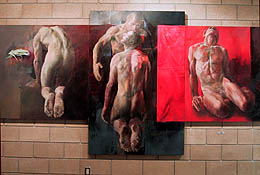 Southey goes on to say about Eagle Eyes, “It’s an illustration. It’s interesting because I am actually writing a piece about illustration and art. Because the word illustration over the past one hundred years has become a dirty word relative to fine art In my view, rather an unfortunate division. If we think about it, Michelangelo’s Sistine Chapel is one vast illustration, as is most art until the 20th Century. We have gone down the road of denying symbolism. That is what illustration really is. Illustration says, ‘I want to make a point.’ What is so terribly wrong about that?”

Southey mentioned that the “Eagle Eyes” piece is not so subtle, and when asked how this literalism relates with his current and new work responded, “I think it relates in that symbols occur in both of them. The difference being that the ‘Eagle Eyes’ painting can pretty much be read one way. . . I think the other work will have similar objects and visual items but it’s wide open as to what, many more layers, the viewers are much more free to say what they want to, to read into it what they want.”

Southey continues on to say, “I have done several illustrations in my career, shamelessly. I don’t think artists should have to apologize for that. It is kind of the snootiness that is part of the art world. So you shut out people that are not artistically literate. That is what I like about the Norman Rockwells. While I was teaching at B.Y.U., I would have arguments with my colleagues who were modernists who pooh-poohed and dismissed Norman Rockwell. He’s not Michelangelo, but . . . it is a spectrum. And, some things are simple, right in your face and clear and other things leave you with mystery. If you are going to prioritize, I think mystery, in the end, is the best place to be, because it is the simplistic viewing of life that leads to the black and white behaviors in life that lead to fascism.”

In response to questions about a particular course for his new work Southey responds, “It is funny you should ask me that. Because I have been doing a lot of soul searching and I’m finding myself really wanting to, for years and years and decades I’ve been talking about emptying my work out, having less stuff in them. I look at abstract works by other artists with some admiration and some envy. But, the narrative and the rendering of things is something that is so deep in my bones it would be a form of betrayal. So, I see I have some color that is going to quiet down, and landscape is going to enter more. I don’t know. One of the things I try not to do is dictate to my work, where it is going. I let it dictate to me where it wants to go.”

“By nature of my life, I just turned 65, for example, I am looking at old people with renewed respect. Finally, I did two portrait studies of World War II vets for my big Russian project. It was a good experience to get in there. I usually tend to focus on the young and the ideal. The bottom line is I am going to remain . . . who knows . . . at this moment, I think I am going to remain committed to the recognizable imagery in my work, maybe more fragmentary. As I say that, I find myself wanting to really get into every eyelash in some of the work I do. I am actually torn. By the way, that conflict is universal throughout my life. I look at an artist like John Singer Sargent with a huge generous brush stroke, and wow, I like that. But, I look at one of my most favorite paintings ever, Ophelia, by one of the Pre-Raphaelites, notably articulated. What you will see actually happening in my work is kind of a marriage of the two, a lot. So I deal with the conflict by marrying them. Which I think actually interestingly enough is a lot of what life’s all about. We tend to evade and avoid conflict. Maybe the answer is not to evade, but to embrace it. In a sense, I think that’s kind of what I do.”. 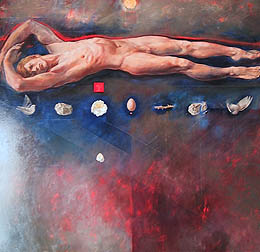 The important aspects of collaboration which have brought about this exhibit aside, the show is impressive in its own right. It has been many years since a collection of this many new pieces by this proficient artist have been seen together. Not only does this show include twelve new works, it also includes many favorites from etchings, to drawings, to oil paintings, to sculpture. These new pieces incorporate the same exquisite symbolism that is typical of Southey’s work. Several other galleries from across the country have sent work to be included in this exhibition. There are two prominent pieces that stand out in my mind, and “rank in my personal top ten,” says Southey: “Reconciliation” [3] and “Prodigal.” [2] “Prodigal’ in particular has gotten me into a lot of hot water. And I didn’t do it to get into hot water.” These have both been in private collections for over 25 years and are now back on the market. They are strong and indicative of the important emotional forces that drive all of Southey’s work.

This article originally appeared in the July 2005 edition of 15 Bytes.

Tagged as: "A" Gallery, Trevor Southey