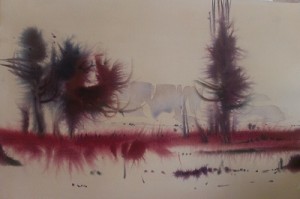 Watercolor is perhaps the most versatile paint medium, its range running from the most ephemeral, barely perceptible stain all the way to the intensity and illusionism of oils, with an infinite register of effects between. While it would be absurd to say there are only two ways to watercolor, it is possible to identify assorted pairs of extremes that mark the various boundaries of what the medium does well. In one extreme mode, often used to record places and scenes actually visited by the artist, the work is carefully plotted, often in pencil, and then, exercising meticulous control, the colors are filled in and shaded to produce not only a record of the physical facts, but to capture the lighting and mood of the place. This technique can also be used to paint flowers, the result usually being distinguished by the term ‘botanicals,’ in recognition of intent to provide scientific accuracy in detail. On the other end of this particular spectrum can be found the most intense and spectacular color effects that, while often carefully practiced, even rehearsed, concentrate on splash, spontaneity, and the luminous effects that watercolor, with its transparency and intense chroma, remains uniquely capable of producing.

An ‘Up and Upcoming’ preview in the back pages of the May edition of 15 Bytes suggested that it might be possible to unite these two extremes in a single, coherent painting. Called “Autumn,” the previewed landscape by Richard M. Garland displayed mastery of this most familiar genre—not, admittedly, the rarest achievement among Utah’s community of artists—but several original effects as well. In the mid-ground, two dynamically balanced clusters of desert trees pin in place a horizontal strip of magenta shrubbery that divides foreground from background, its color establishing the titular season. Tree boles drawn with a calligrapher’s brush contrast with an explosion of spiky foliage that spreads like static electricity into the adjacent area. Between the trees, the ghost of a distant mesa, almost lost in atmospheric haze, anchors the whole scene in representation, rather than letting it slide into abstraction. The contrast between the uncanny realism of the distant cliffs and scree, captured by a sun past its zenith, and the abstract ambiguity of the foreground carry home the significance of the season. Combining the splendor of extravagant, waterborne color with dry-brushed precision, “Autumn” balances between the liveliness of summer and the austerity of winter. 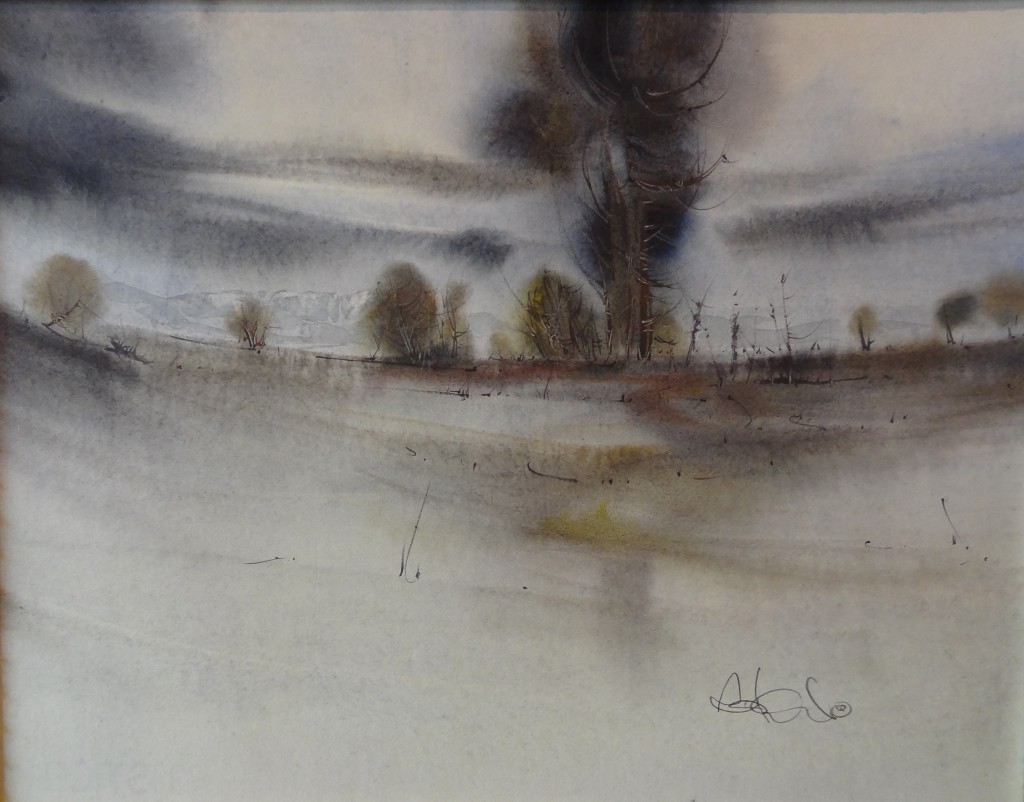 Under the Weather by Richard M. Garland

During the Gallery Stroll opening for Garland’s current exhibit at Charley Hafen’s recently-expanded gallery, Debra Garland, the painter’s wife, tallied twenty-seven landscapes, twenty florals, and seven abstracts. It’s a lot of work, especially when the painter has also meticulously framed each of them, often using linen matts and vintage frames that complement the traditional feel of the art. But for the originality of his techniques and aesthetic choices—especially his bold forays into wild, landscape-based abstractions—Richard Garland’s art might have been painted any time in the last hundred and fifty years. But those uniquely personal contributions, including his astonishing salt water technique, which turns out differently each time he uses it, remind us that art didn’t undergo a complete death and transfiguration in the late 19th century. The rise of modernism created a new stage for those who want to compete to be in the history books, but that novelty was like a new variety grafted onto an established fruit tree: the new fruit is often taken for the whole tree, even though the bulk of the work goes on being done by roots, stems, leaves, and other unchanged—and more robust—parts. So, too, the work of so-called contemporary art benefits from, or else suffers from the lack of, approaches that continue to root themselves in human nature, in the compulsion to observe and remember the natural order. Richard Garland doesn’t lecture his audience about current social or political conditions; he doesn’t lecture at all. What he does is invite his audience to engage in a discourse of a more timeless, universal nature.

Which is not to say that there is nothing progressive or experimental here. As already hinted at, Garland selectively uses saltwater in place of pure water, producing in place of puddles a variety of cloud-like and speckled effects, as well as extended color boundaries marked by an assortment of spikes, fingerlings, and other linear effects. But behind what can be seen lies something more radical. As if to compensate for his high level of control, Garland uses abstraction to propel realism, rather than the other, more historical way ‘round. Many of his more striking images began with controlled explosions of color, which he then corralled and directed in keeping with what they spontaneously recalled to his memory for sights, places, weather, botanical structure, visual conditions, and so forth. Hence Garland calls his show By Memory. But we have recently begun to understand how much our memories rely on our imaginations to build complete pictures out of recollected fragments and general knowledge, so we realize that here we have an artist working neither strictly from life like a memoirist, nor entirely from imagination like a novelist. Rather, like a poet, he labors in the zone where memory and imagination interact and support each other. 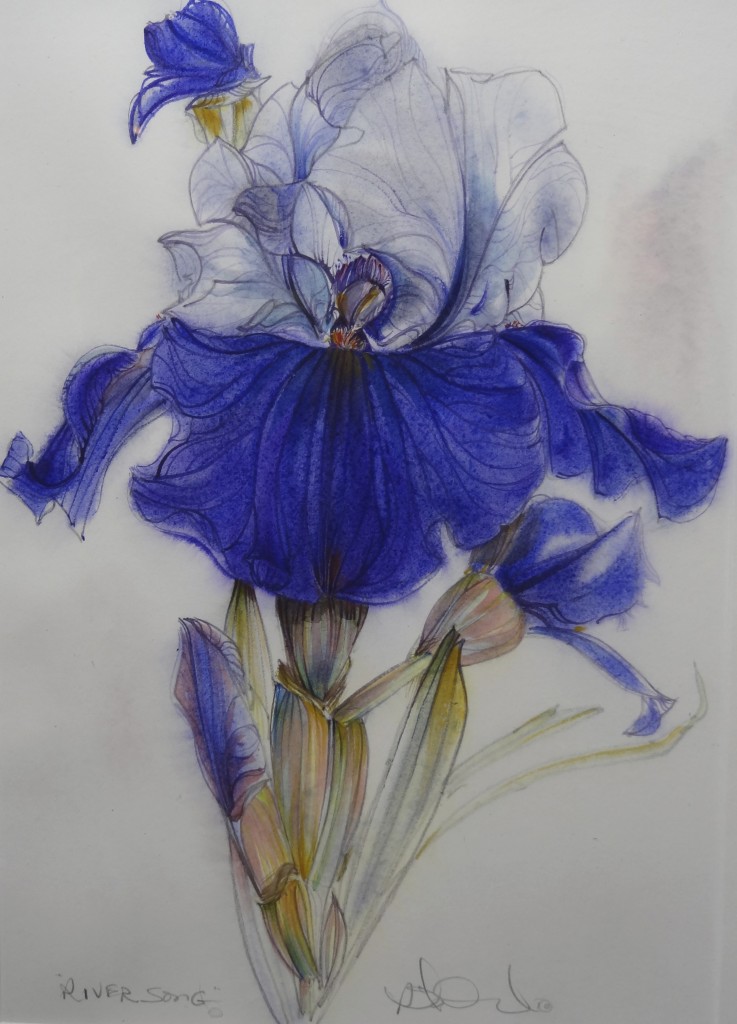 “Autumn” is surprisingly larger than its photo suggests. Some of Garland’s florals, like “River Song,” are close in size to the originals. For some viewers, the real magic will materialize in jewel-like, miniature landscapes. These 54 painted images present the world as the painter remembers having seen it himself, and it’s hard to imagine there being a visitor who won’t be reminded of something just as intimate, just as personal.

By Memory, an exhibit of over 50 watercolors by Richard M. Garland is at Salt Lake City’s Charley Hafen Gallery through June 14.