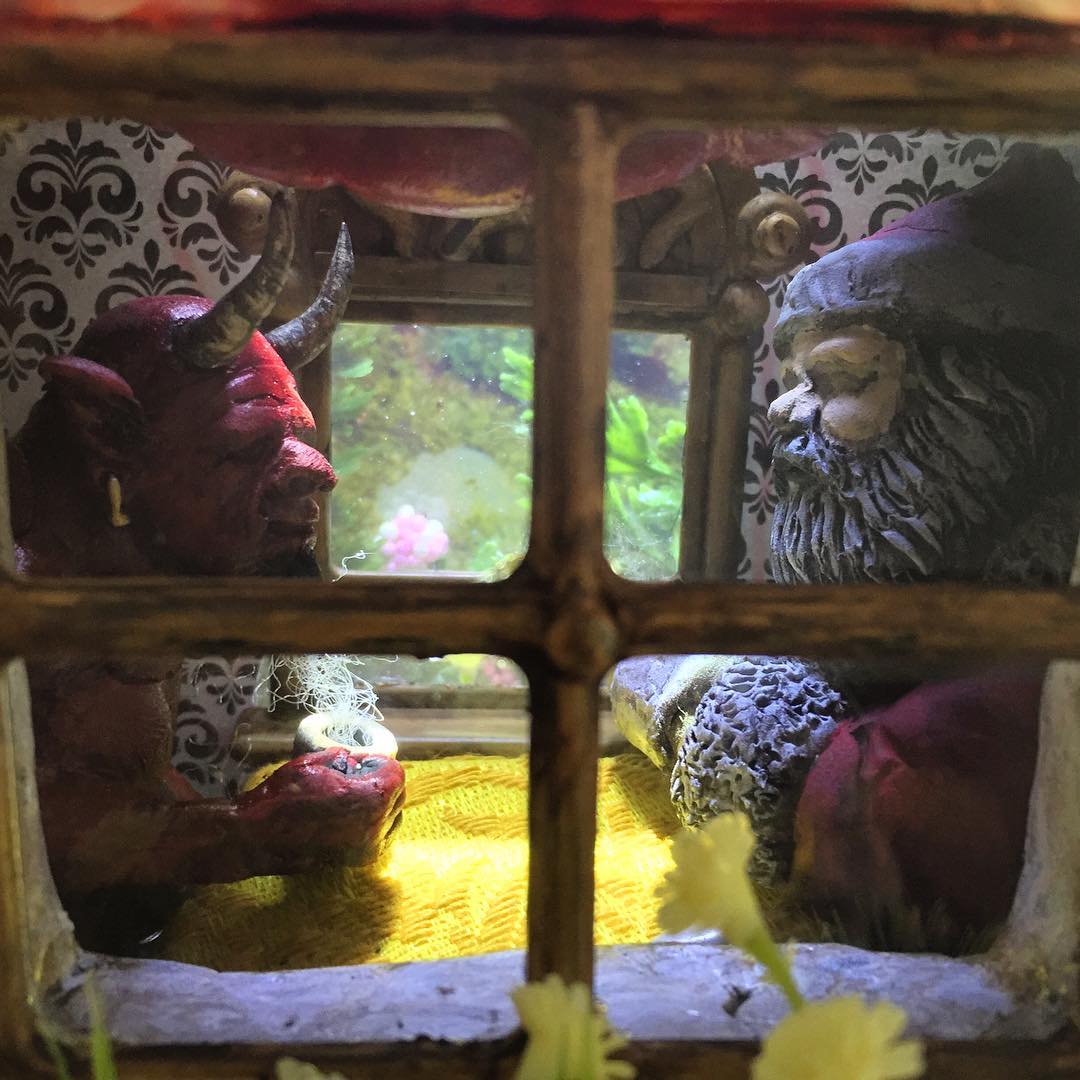 Santa versus Satan by Elmer Presslee

If somehow the primal essences of cult horror movies, ‘80s arcade games, abandoned amusement parks, and pulp sci-fi magazines were smashed together, Elmer Presslee’s art might have been fused from the resulting debris. Although many elements feel familiar—callbacks to subcultures of the 1970s and 1980s—Presslee’s style is so distinct that the whole body of work feels new and cohesive. Each detailed and polished piece in Unprovoked Collaborations looks like it was plucked from a terrifying universe—full of brightly colored, part-human nightmares—Presslee found at the end of a portal. Like a science fiction or fantasy novelist, Presslee has created art that acts like evidence of a believable and alien reality.

In Presslee’s sculptures, found objects and crafted elements are arranged on surfaces and peep out from eerily-lit shadow boxes. In “Satan vs. Santa,” viewers see Santa Claus and Satan sitting at a tiny table, sipping cocoa, through the lit window of a house. The house is a planter made out of human flesh, with plastic grass and giant worms visible at the top, and is held up by an open mouth full of teeth of different sizes. The contrasts between the cutesy and terrifying, the vintage and newly-made, human body parts and the inanimate objects, pull viewers in and make the works feel eerie and uncanny.

Since Ernst Jentsch and Sigmund Freud published essays on the psychology of the uncanny at the beginning of the 20th century, artists have been fascinated by juxtapositions of objects, textures, and colors that provoke feelings of discomfort and even disgust. Presslee’s pieces, with bulging eyes, satanic symbols, and confrontational neon colors, produce some of these emotions. Freud explained that uncomfortable sensations are created by “intellectual uncertainty” and arise from images and ideas that are frightening or dreadful. Many Surrealists and contemporary artists (sculptors like Mike Kelley), have experimented with fabricated or arranged objects that provoke this kind of uncanny effect.

The absurd combinations of objects in Unprovoked Collaborations echo classic works of Surrealist sculpture, like Marcel Duchamp’s “Why Not Sneeze, Rose Sélavy?,” which features marble cubes cut to resemble sugar lumps stacked in a metal cage. The disjointed and exaggerated body parts are reminiscent of images by Salvador Dali. However, many of Presslee’s art objects are built on functional objects, including helmets, masks, and tables. This prop-like quality makes them feel like they could have come from a haunted house or a film set, and keeps them from straying into extreme high-brow territory. There’s a tongue-in-cheek humor to pieces where bouqets are made with ears and tongues instead of flower petals and a work titled “Sexy Chicken” looks like neither.

Presslee’s work wouldn’t look at home in stuffier gallery settings, but they fit well in the experimental space of God Hates Robots, which opened in 2015. Presslee’s precise technique and polished finish are signs of an experienced professional artist, but it’s not every day that you walk into a gallery and come face to face with the bulging eyes of a giant pink bunny head. God Hates Robots shows emerging Salt Lake City artists and describes itself as alternative. To encourage first-time art buyers, artists are limited to selling their pieces for a maximum of $400 and the artists keep 80% of the profits. Unprovoked Collaborations and God Hates Robots are a perfect marriage of alternative, local, and unique. Together they bring the best kind of weird to Salt Lake City.