EVE, Salt Lake’s three-day new year celebration of light art and sound, happens this weekend at ten different venues downtown. During the celebrations there’s plenty of live music at the Gallivan Center, but if you want to get out of the cold there are a number of participating indoor venues, including the Utah Museum of Contemporary Art. If you haven’t already seen UMOCA’s latest exhibits, Megan Geckler’s No Chance to Move Backwards and See and Triple Candie’s Of The Siren and The Sky, EVE is a perfect opportunity. The two shows are an interesting contrast in current trends in the contemporary art world. While the first is visually stunning installation by the artist, the latter is a more textually-oriented curatorial exhibit.

Geckler, a Los Angeles artist, uses flagging tape in playful bright hues to explore sculpture and painting. One of the more engaging pieces takes up approximately half the room in a dizzying spectrum of colors. Bands of orange, blue, green, and yellow tape stretch floor to ceiling in a pattern that appears to twist and change as viewers walk around the piece. The scale is large enough that a person may feel immersed in the kaleidoscopic sculpture, which invites people to explore and marvel at the visual effects. Other pieces in the gallery are created with the same color palette and include a series of nine “paintings” where the tape has been woven together on canvas and a “mural” of fans that spans an entire wall. The overall effect of the decorative installation is dizzying, in the fun and playful way that children will spin until they can’t anymore. 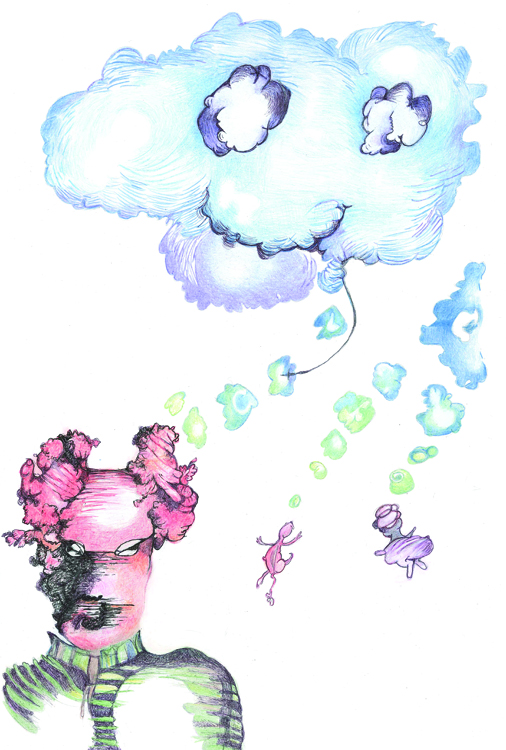 No Words from Of the Siren and the Sky.

In contrast to the striking visuals of Geckler’s individual aesthetic, Of The Siren and The Sky, is more about the exhibit than the art. Or rather, the exhibit is the art. Curated by Philadelphia-based Triple Candie, the show is a visual narrative of the career of Siren Bliss, a Utah native who has gone by a number of pseudonyms in his long and peripatetic career. The curators note that during his career Bliss has remarkably created over 80,000 artworks. None of them, however, are here. Only reproductions and recreations. For example, a series of eight sketches represent the type of work the artist created at a certain point in his career rather than the work itself. As Triple Candie explains on their website, “In short, there is no art, there are no artists; there is only the exhibition.”

Bliss had no involvement in the show, which tells an interesting story of his career thus far. But with only the curator involved in the narrative, and no actual pieces by Bliss, one has to wonder whose story is being told. One of the interpretive panels tells the viewer that Bliss’s “attitude is that one arrives at quality by producing in quantity.” It’s hard to know if this is an interpretation on the part of the curator or if Bliss has actually adopted this philosophy. A narrative without the actual voice of the artist, the exhibit is as intriguing as it is befuddling. People generally expect to go to galleries to view original artwork, but in this exhibit the curator has assumed the role of artist. With the number of “mights” and “could haves” sprinkled throughout the exhibit, one begins to wonder if Bliss even exists or if he is a fiction created by the curators.

Both shows offer interesting insight into the direction of contemporary art. Turn circles alongside Geckler’s installation, and see the bright patterns emerge. Continue down the hall to look at and read about Siren Bliss’s career as told through the eyes of Triple Candie, and you may become just as dizzy. Either option will be sure to get your New Year off to an interesting start.