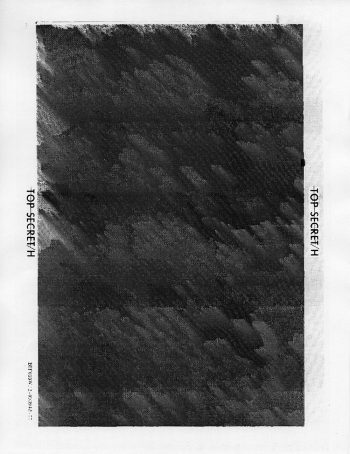 “The Jesuits fought in effect two wars: a war of knowledge and a war of images. They managed to create a virtual monopoly on higher education in Central Europe and to become among the best geographers and linguists of their time…. From such positions, and given their tight grip on the circulation of diplomatic and geopolitical knowledge on the Continent, they made themselves indispensable to many key figures of state.”

—Manuel De Landa, War in the Age of Intelligent Machines

Office Space is proud to present Evan Hume’s debut solo exhibition at the gallery’s new location Room 415 at 350 East 400 South in downtown Salt Lake City. Combining both framed experimental photographs and vinyl adhesive pieces, this show analyzes not only the ascendency of surveillance capitalism during the past twenty-five years with the development of the internet as a technological medium but also the semiotics of military information and visuality of government documents during a broader time frame of the Cold War since World War II. Shoshana Zuboff in a recent interview says: “The competitive dynamics of surveillance capitalism have created some really powerful economic imperatives that are driving these firms to produce better and better behavioral-prediction products. Ultimately they’ve discovered that this requires not only amassing huge volumes of data, but actually intervening in our behavior.” Despite the apparent newness of such tangling technologies such as Facebook, wiretapping under the Patriot Act, and Google searches, Hume’s prescient research looks at the decades of state-based surveillance and postmodern gathering of scientific and social information which snares the private individual into a web of the games of deceit, deception, and destitution under the aegis of neo-liberal capitalism.

Michel Foucault relates within his seminal essay Disclipline and Punish: The Birth of the Prison that “He is seen, but he does not see; he is an object of information, never a subject in communication” as a reference to Jeremy Bentham’s panopticon from the 18th century. Within this blistering series of collaged photographs, Hume elides the archives of declassified information from the United States government files with various artistic interventions such as analog printing, digital collage, scanner manipulation, and data bending that animate the archival material. Through these complex formulas for visual alchemy, the artist deconstructs the so-called concept of government/statist transparency as an illusion of smoke and mirrors. To illustrate Foucault’s aforementioned percept, Hume takes the seeming clarity of subjects such as the U-2 and SR-71 and disrupts the form of the machine into perverted shadows of an otherworldly form of the machine returning back to a state of ruination.

Through this series and its accompanying monograph, Hume’s awareness of our being watched as a collective unit becomes a science fiction-inspired reality expresses in its manifold combinations. For example, in “The Million Dollar Photograph,” the artist focuses on the disrupted photograph as the locus of tensions. In two corners of the work, one can see the doubled words of “SECRET” scratched out each with diagonal lines. Here the concept of the million dollar as a catchphrase for the doublespeak of neo-liberal capitalism combines both military code, where the reference to pricing and relative value of military equipment, and the real estate market, a place whether loan arbritrage and falsification are commonplace within the United States. Hume’s satirical use of language merged with technological, post-human markmaking converges into the viewer’s strange fascination with an archive infected by the computer viruses of obfuscation and data disruptions. In “AX-2,” the artist takes the humanoid form of a white military suit and spreads it across a woven horizontal line as if a mirror were being dragged across the floor. Instead of the Specialists of Steven Spielberg’s film A.I. Artificial Intelligence, the observer gets instruments of emotionless death and oppressive mayhem as the result of ruthless calculations of machines creating machines in an everlasting circular pattern. Also implicitly, this work ties into the linear form of the army march as well as the strong connection between military imagery and whiteness as a coded form of alt-right white supremacy which has been made manifest with the high percentage of military involvement in the 2021 Capitol insurrection.

Other works within this series become much more abstract without any identifable referents. One can see in “Sonic Boom” that there are colorful sine waves in a parallel formation which remains very open-ended in what the photograph refers to in terms of cultural or archival presentation. In fact, the artist states that “Photography’s technical and operational evolution in the twentieth century and into the twenty-first is inseparable from political conflict.” Thus seemingly pure abstraction cannot be decoded without the index of statist politics here. The political construction of the image is embedded not only within the coded language of the formalist elements of pattern and composition but also the outside interpretation of the inherent components of the photograph’s content and materiality. Within “Top Secret/H (Hexagon)” the draftsmanship of the organic crystalline shapes of the charcoal colored gestures covering up an implicit wall of text or diagrams bracketed by the text of “TOP SECRET/H” are shadows of conjectures, of guesses into a parallel world that the average viewer would not fathom.

De Landa states that “The decomposition of a particular human task into its basic components and the acquisition of control by machines are two elements of a single strategy.” An argument that any formal strategy of conceptual photography betrays the same shared methodology of ruthless logic which militarized control of information and secret language of the erased text and redacted knowledge. Hume’s art profoundly examines that disjunct vocabulary in an uncompromised and jarring glance.

Evan Hume is an artist based in South Bend, Indiana, where he is currently the Visiting Lecturer of Photography at the University of Notre Dame. Hume earned his BFA from Virginia Commonwealth University and MFA from George Washington University. Raised in the Washington, DC area, his approach to photography is informed by the experience of living in the nation’s political center and focuses on the medium’s use as an instrument of the military-industrial complex and intelligence apparatus. He has exhibited at a variety spaces including Fotografiska (New York, NY), Filter Photo (Chicago, IL), and Furthermore (Washington, DC). Hume’s work has been featured by publications such as Aperture and Der Greif, and is currently part of the Museum of Contemporary Photography’s Midwest Photographers Project. His first monograph, Viewing Distance, has been published by Daylight Books in the fall of 2021.