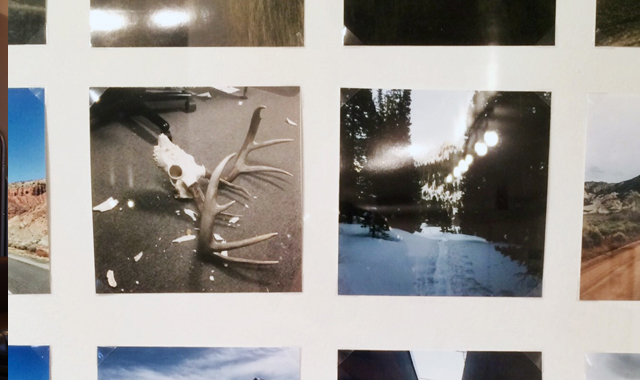 Utah houses some of the world’s most stunning geological wonders and Mestizo Institute of Culture and Art’s newest exhibition, Et in Utah Ego, acknowledges and challenges these markers of Utah’s local identity. The show, curated by Mestizo’s director Renato Olmedo-González, presents over 100 small photographs taken from locations across the state with an iPhone camera. The images were originally published on the Internet, making their translation to an exhibitional venue an interesting one.

The images vary in tone and subject, with a mixture of landscapes and banal interior scenes littered across the gallery’s walls. A great contrast arises when comparing several of the landscapes, which are picturesque and postcard-like, to the snapshots of dilapidated houses, abandoned sheds and eerily isolated locales. For those who are from Salt Lake City, an uncanny familiarity is sparked when viewing these images, inciting a guessing game that invites viewers to locate as many of the sites as possible. This quest is difficult however, as some of the images are deliberately cropped so as to zoom in on one section of a larger whole. “This exhibition intentionally experiments with several aesthetic elements (e.g., line, form, color, subject matter) both through the work itself and the way it has been curated, which visually contrasts with [the] idea of pastoral beauty in landscape images,” Olmedo-González says.

The photographs are numerous, and thus hung in rows and grids on each wall of the gallery, making it apparent early on in the viewing experience that one cannot visually register each photograph. This visual overload sparks an internal rhythm that guides one’s motor movement, moving in a slow yet calculated fashion attempting to absorb some-but not all-of the images displayed.

The exhibition speaks to the nature of contemporary image consumption. With an increasingly large amount of information obtained electronically, digital media that offers viewers faster, more remote and anonymous interaction, is replacing tangible means of communication such as newspapers and art museums. Despite these rapidly changing channels of connectivity, we still hold institutional venues such as galleries and museums in high regard. If a work of art is placed in such a venue, cultural critics who agree on its value must have vetted it. Works placed on the Internet however, may not receive the same degree of interrogation and are part of an endless stream of data. Therefore, Et in Utah Ego takes images that existed in such an open setting and places them in a restricted venue. Olmedo-González adds, “I think of the Internet a ‘space/location’ in its own right, rather than just a technological construction or a place that just exists through computers, phones, etc. For me, one of the most interesting functions of the Internet is how it is a place for visual production.” Indeed, exhibitions such as this can inspire a new view of the curatorial process and artistic participation alike.

Et In Utah Ego is at the Mestizo Institute of Culture & Arts in Salt Lake City through June 27.

Tagged as: Mestizo Institute of Culture and Arts, Renato Olmedo-González