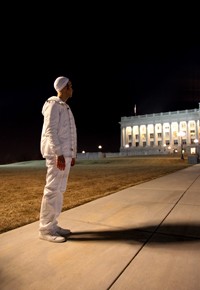 A response to Ernesto Pujol’s Awaiting.

On Thursday, April 8th, Ernesto Pujol led dozens of participants through a 12-hour, site-specific performance called Awaiting, a project he discussed in the recent edition of 15 Bytes.

I suspect the local Mormon audience found resonance in Pujol’s mission even while their pragmatic minds may have been baffled by its practice. In his work Pujol wants to create places of silence, loci where time returns to its nature, the urban space is redeemed from its noise and confusion and the individual or group is offered a space and time for contemplation. Salt Lake Mormons might tell Pujol he’s rather late entering the game. But he’s in the right neighborhood. A few blocks down the hill from the Capitol steps where the twelve-hour performance occurred sits the Salt Lake Temple, a place that for over a hundred years has been just such a locus for the faithful who have entered it. Listen to Mormons talk of the temple experience and you’ll think they are writing Pujol’s artist statement: the temple is described as a quiet place of peace, outside of time (there are no clocks), and removed from the outside world. And if the two-hour plus ceremony in the temple isn’t “durational” enough a comparison to Pujol’s project, think of the “treks” that happen every summer where willing participants wearing period dress put themselves through a three-day durational experience of life crossing the plains in 19th-century America. For most it is a life-altering experience. They speak of it in ways similar to the performers in Awaiting.

Pujol came to Utah as the “outsider,” as what he called the “itinerant artist” — a reference to the itinerant photographers of the 19th century that could have equally referred to the itinerant preachers of the same time. Pujol’s background as a cloistered monk and current practice as a Buddhist informs much of his work; and his practice shows that he seems himself as an artistic/spiritual “leader.” Pujol puts himself forward as the layman’s religious man. He brings the religious sensibility, including its rituals and forms, to a secular public.

Pujol runs into some of the same problems as religious leaders: the world is too much with us. As much as a practice might strive for enlightenment, or freedom from the world, the gravity of experience inevitably pulls one down. In his interview with Monty Paret in this month’s edition of 15 Bytes, Pujol said he “harbors very radical notions of what art should be in America in the 21st century . . . refusing to be part of the old economy of collectibles.” This is easier said the done. He does not live without purse or script. He sells photographs of his performances (and his site has a series of photographs for each performance, most of them artfully done), entering into the economy of collectibles, so that his photographs will be sold on the same block as a Jeff Koons or Andy Warhol. It is not so much that Pujol does not participate in the same commodity market as most visual artists as he operates in a different economy – the performing arts economy. Like a dancer or master violinist who comes to a city he is hired for his performances. One could counter by saying that twelve hours is longer than entertainment and puts him out of this category, but tell that to the hordes of youth who flock to rock festivals in the summer, or the aged hippies who follow or have followed bands like the Grateful Dead and Phish. In fact there is something of the rock spectacle in Pujol’s work. He dresses the part, like a 70s prog rock artist (think of Peter Gabriel from that decade). And despite all its infamous excesses, that movement of the seventies was also a substitute for the waning sensibilities of religious experience. Pujol’s photographs are like the t-shirt or concert poster, portable commodities that serve to remind you of the experience, regardless of whether it was hedonistic or zen-like.

This “appreciation” of Pujol’s experience is not meant to diminish it. The experience is what it was and anything said about it, by Pujol or others, like myself, is a context in which it can be wrapped. But if much of contemporary art and performance is an investigation of context, as Pujol’s is, the art form that does the investigating is no less open to inquiry.

To end, let’s put Pujo’s performance in the following context. Imagine the University of Utah hires a Catholic bishop, or Mormon general authority, and pays them to come to the campus for a semester and lead a group of students in their particular spiritual practice. In doing so the invited individual talks about their specific spiritual outlook. Would that individual have been embraced as heartily by the same campus and students that embraced Pujol? But Pujol, you may argue, does not come from an organized religious structure. I would respond by saying that the institutional network of contemporary art institutions is as well organized as some evangelical church networks in America. And as well endowed. And their message can be as uniform. What is the difference, then, between art, as practiced by Pujol, and religion, as practiced by many in this country?

Pujol’s Awaiting really is a riveting idea. To paraphrase something Daisy Fried wrote recently in the New York Times, it’s a conceptual piece: you may be more excited to know that it exists than to sit through it. But it may have been quite passé to the majority of people in this state. His aims, and even some of his methods, have been practiced in Ward houses and temples across this state for many years.