Eric(a) at Plan B Theatre 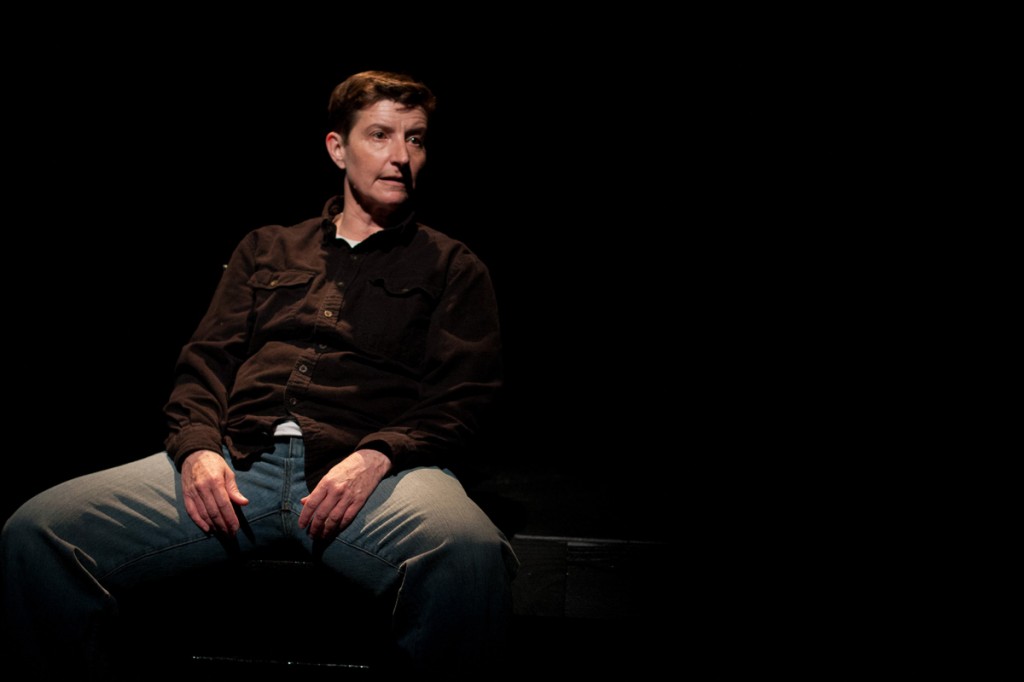 What does it mean to be a man? Plan-B Theatre Company’s resident playwright, Matthew Ivan Bennett, tackles this complex question in his latest work and world-premiere Eric(a). A one-person play that directly engages the audience as participants, Eric(a) is a thought provoking piece filled with challenging questions about gender, relationships, and self identify.

These broad questions are made digestible because they’re addressed through the experiences of a unique character, Eric. The audience is brought on a striking journey as they learn about Eric, who has recently left behind his life as Erica. His story is compelling not because he is transgender but because everyone shares more common ground with Eric than they might initially believe.

Played by Teresa Sanderson, Eric takes the stage as a speaker for an event titled “Living Trans.” As Eric relates anecdotes from his life — some humorous, others heart wrenching — the theatrical audience is transformed into his conference audience, a strategy that engages the viewers in what is a series of personal disclosures. Through an elegant bit of stage design by Jerry Rapier, also the Producing Director, Eric is behind a podium when he shares the stories he has prepared, but moves off the platform, away from the protection of the podium, and closer to the audience when he is sharing a raw piece of his life that he seems surprised to reveal.

As the play opens, Eric nervously begins his presentation when he realizes that nobody has the handout to accompany his talk. He proceeds to give everyone in the audience a list titled “LIVING TRANS: An Intellectual Defense of Trans Experience,” to which he refers throughout the play. This format could have come across as preachy or confessional, but Eric’s struggles are so relatable it begins to feel as though he’s confiding in close friends.

Eric tells the audience about his constant uncertainty. As someone who recently transitioned from being female to male, he is still feeling out masculine behaviors that seem right. This is no easy task, because like point three on his list says, “Any specific meaning of ‘masculine’ comes from culture or our individual minds.” Eric is often weighing himself against the most traditionally masculine person in the room, and sometimes finds himself lacking. This issue of self-confidence is universal and can be understood by anyone who has ever compared himself or herself unfavorably to another person. In one particularly moving scene, we learn it’s this lack of self-confidence that led to Eric’s marriage. When he was still Erica, she met Joe at church. Joe is intelligent, athletic, and good-looking. They ultimately tie the knot because of an accidental pregnancy, but more importantly because of how Erica feels about Joe — she wants to be him.

After Eric transitions, he falls in love with Addie, but he’s terrified to disclose his past. It’s unquestionably human to feel vulnerable in love and to be frightened about divulging personal, intimate details that could harm the foundation of a budding relationship. Eric worries about what so many of us do: being loved for who we are, maintaining honesty in a relationship, and satisfying the needs of those we love. His story is often less about being part of the transgender community, and more about the human condition.

As Eric, Sanderson delivers a performance that feels authentic. She carries herself with all the swagger of a man. The way she folds her arms, leans back in a chair, or adjusts her clothing are convincingly masculine. Every so often a gesture like draping her wrist over the podium is intentionally feminine and she corrects it because Eric is still fine tuning his ability to move the way he believes a man should. Sanderson becomes more than a woman playing a trans man, she becomes Eric. Eric is brought to life so fully that when the play is over it’s easy to believe he is still out in the word pursing love and looking in the mirror each day, hopefully seeing more of the man he aspires to be.

Bennett never answers his initial question, “What does it mean to be a man?” Instead, he implies that masculinity is too complex an issue to be given a simple definition. It manifests itself differently in individuals. As points seven and eight on Eric’s handout explain, “Regardless of biology, we can have greater preference for expressing ‘masculinity’ over ‘femininity.’ What we prefer is a property of psychology, swayed and often restricted by cultural ideas.” Through Eric(a), Plan-B Theatre hopes to start a dialogue about understanding the multifaceted nature of gender, so people can disrobe from their costumes and be comfortable in their own skin. Watching Matthew Ivan Bennett’s Eric(a), the real question we end up asking ourselves is, “Since we’re all human and share similar experiences, why do some people believe they’re so completely separate from someone who identifies as transgender?”

Eric(a) runs from February 28-March 10 at the Rose Wagner Studio Theatre. Shows are Thursday and Friday at 8pm, Saturday at 4pm and 8pm and Sunday at 2pm. Tickets are $20 for general admission and $10 for students. The performance is 70 minutes long without an intermission. Tickets can be bought online or by calling 801.355.ARTS.