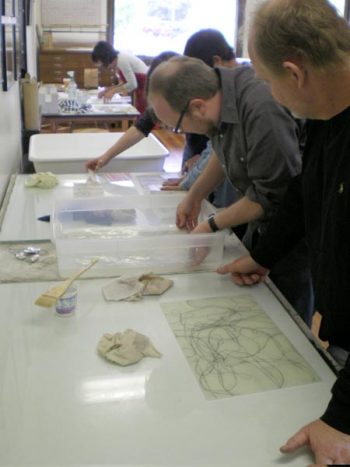 After a hundred and fifty years of unparalleled innovation, the most far-reaching development in art hasn’t turned out to be the splatter elbowing aside the brush, or performance taking the place of the object, or even abstraction replacing representation. Since 1912, when Picasso glued a picture of chair caning onto a Cubist canvas, collage has turned out to be not just a versatile technique, but in its capacity to break down the line between art and reality, the central metaphorical device of our age.

Even as the line between naturally occurring and fabricated reality dissolved, the hard and specific techniques of collage expanded their influence on the plastic arts. Not content with gluing manufactured images into works begun or completed by hand, painters went on to adhere every imaginable natural and man-made material to their canvases. In sculpture, collage initially took the form of welding together metal parts, but eventually led to the legitimating of every kind of assemblage. Newer mediums like installation and video are hard to imagine without collage.

But one of the purest forms of collage is the printmaker’s technique known as chine collé, a remarkably versatile—indeed, essentially limitless—technique involving an array of paper overlays, each individually printed, then arranged and laminated together to create effects of mood, atmosphere, space distance, overlap, subordination of color or line elements, or any other effect an artist can find and utilize. 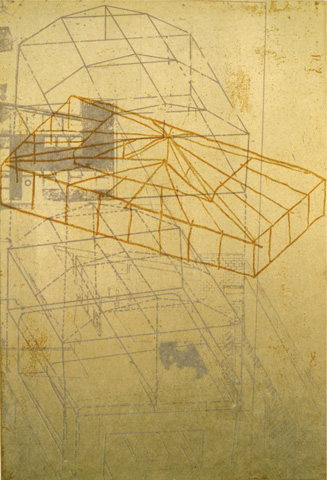 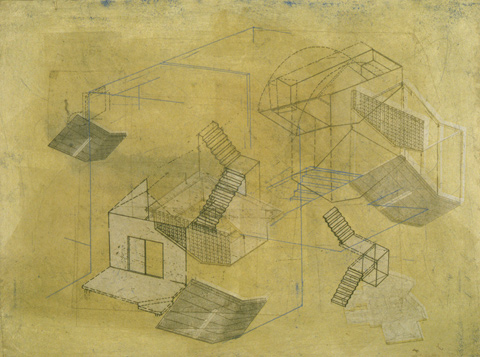 “A Protective Arrangement” by Erik Waterkotte 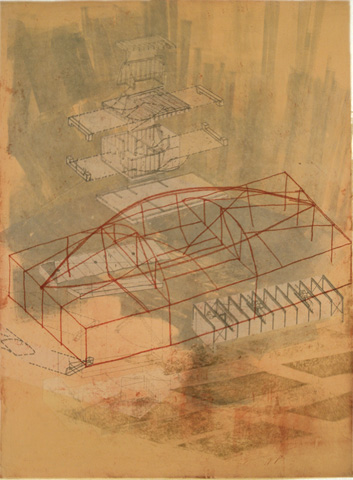 Chine collé was the topic of a week-long workshop given the third week in May, hosted by SaltGrass Printers in Sugarhouse and featuring Minnesota print maker Eric Watercotte (pronounced watercutty). Traditionally, the primary virtue of chine collé is its capacity to combine two papers with very different character into a single image. Due to its flexibility and lack of visible grain structure, very thin paper can accept a very fine image, with exquisite detail and subtle color gradations that would be lost on a coarser material. Collaging this image onto heavier paper can then add support, texture, pattern, or shading: other qualities not present in the printed layer. Examples can be seen in the work of veteran Utah artist and educator Adrian van Suchtelen, whose studies from nature combine the delicacy of the original with the durable visual presence encountered in Northern Renaissance realism. For Eric Watercotte, however, chine collé provides the freedom to combine a conventional matrix—a wood, metal, or plastic plate that allows him to transfer his drawings as prearranged patterns of ink onto paper—with extemporary, even spontaneous elements he derives from his environment. Using a variety of approaches, from tracing to found objects and the magic of Max Ernst’s frottage technique, he builds up an ambiguous space in which mysterious objects are surrounded by a nimbus of diagrammatic elements that strive to analyze or explain them, contain them, or perhaps call them into another level or being. Often they suggest architecture, or landscapes, or one as the other. By controlling the transparency of layers and allowing a certain amount of “noise” to accumulate, he gives these images simultaneous, contrasting qualities: on the one hand, self-consciousness of their origin in graphic processes; on the other, a feeling of animation in real space. It’s a mix with a strong affinity for sophisticated twenty-first century eyes. 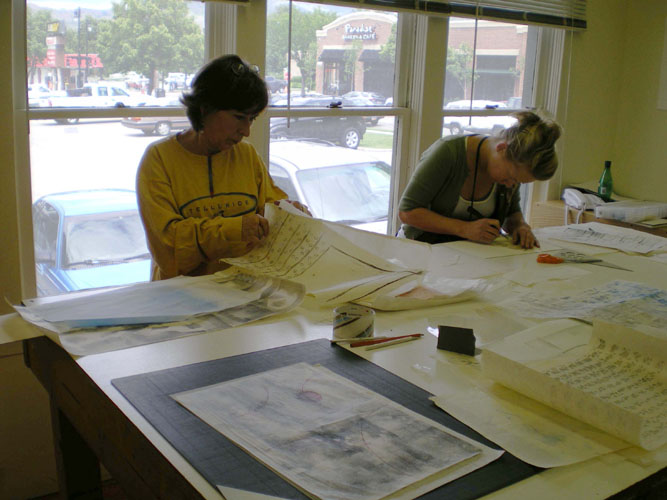 Students at work at SaltGrass Printmakers

By the time this is published, Eric Waterkotte’s workshop will have ended, but he will follow the class with a two-week residency as print maker at SaltGrass, during and after which his work will be on display, in both the gallery and workspace. SaltGrass also has a regular series of classes and special events, information on which can be found at the collective’s website.