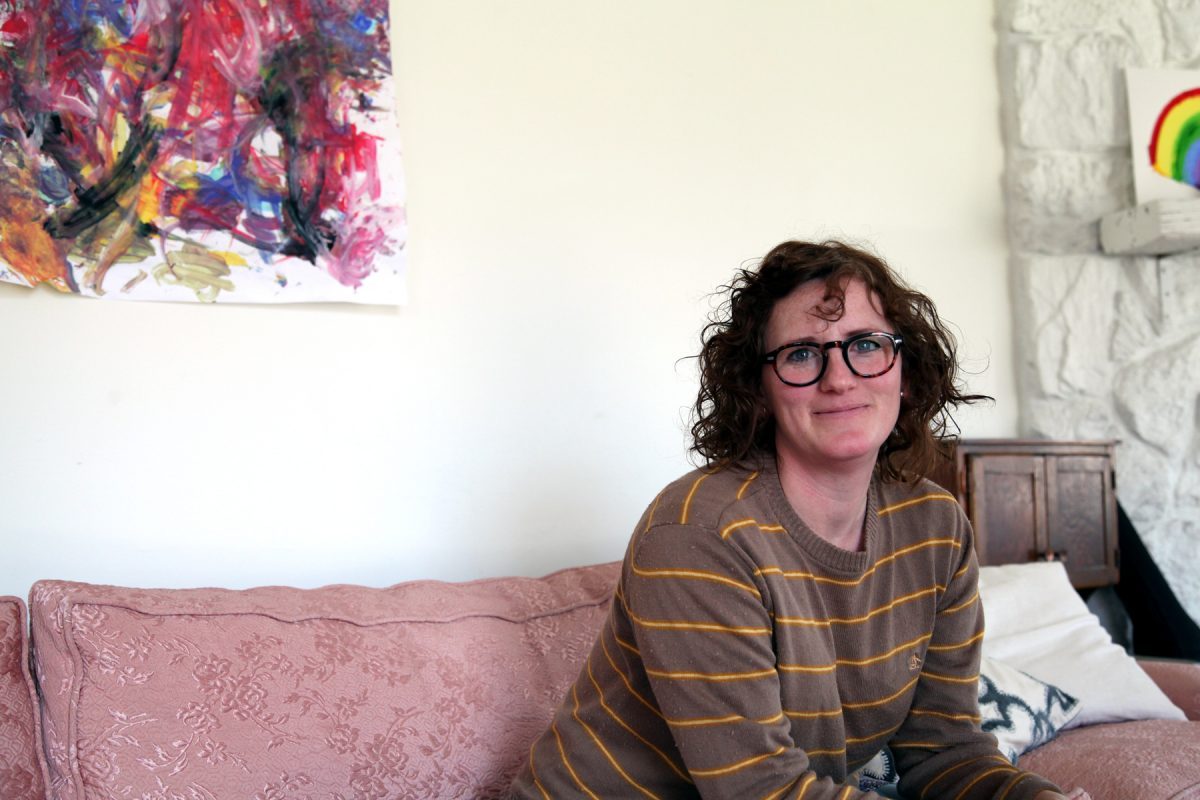 It’s always easier to tell a story when it’s over, when you’ve arrived at a place recognizable as a destination, to have things tidily wrapped up despite whatever struggle or confusion might have preceded it, to know what it was all about, what it means. This isn’t one of those stories. Emily Fox King is at what Dante called the middle of life’s walk, so nothing’s wrapped up, no conclusions have been made. She’s at a point that is as much about looking forward as looking back. King lives in a mid-century rambler not far from the campus of Weber State University. In the yard, a tricycle, a broken light saber and a plastic box full of rice and small toys (a safe alternative to a sandbox) attest to the presence of her young children. Two are rumbling around inside. A third is at school. A finger painting, done by the youngest, hangs above the couch, where it was hastily pinned up to replace one of King’s own paintings, now hanging at the Alice Gallery in Salt Lake City.

Florescentia, King’s exhibit of new works, fills the intimate space on South Temple with a riot of color — paint swirled, scraped and jabbed across canvas to form a score of overflowing floral motifs. Many are 4 feet or more in either dimension, so the flowers are larger than life, threatening to overpower the viewer with visual stimuli. Yet, dramatic as their execution might be, these are floral paintings. One might be tempted to add “just.” Not exactly cutting edge. Nor the type of work you might expect from King if you came across her at BYU.

As she pursued her MFA in the late aughts, King was doing a lot of work in new media like video, performance and installation. Her pieces explored traditional notions of femininity, like her ironic video works that featured beauty pageants, ballet, sewing, synchronized swimming and pastries, or her final MFA show in 2010, Fabricating Womanhood, an installation of a human-size dollhouse. The work was well received by her peers and she continued to feel affirmation for what she had done when, after graduation, she would return to campus and people would remember her work and compliment her on it.

Once out of school, King moved to Salt Lake City, where she taught at Indian Hills Elementary, on Salt Lake City’s East Bench, before driving UMOCA’s art truck for two years. Artistically, she says she was “dinking around.” She returned to her first love, painting, with an exhibition at Sweet Branch Library called Princess Religion. Her description of one work — “a buxom Disney princess with her Mormon Disney-castle wedding” — gives a sense of the satirical approach she was taking as she examined the life around her in her late 20s: people from her community obsessed with money, makeup and plastic surgery. Though the works employed a more traditional medium, they continued the trajectory of her MFA work, exploring issues of female identity. King grew up in the Tri-Cities area of Washington state, LDS, the middle of seven children. She had what she describes as “disordered eating” — not full-blown bulimia or anorexia, but body- image issues. Though she loved dance, for instance, at 12 she realized she would never have the body of a ballerina and gave it up.

Things didn’t get much better in college (though she did take a modern dance class, as “a way to heal”). “Being 18, 19, 20 — that’s just one of the worst times in a woman’s life,” she says, speaking from her own experience but reinforced by observations she’s made teaching at Weber State for the past six years. “You’re just incredibly vulnerable, you don’t know if you have a voice. You have tunnel vision, where everything’s about you and what you look like and how you’re perceived and how cool you are.”

Her parents both worked with their hands — her mother is an artist, her father a surgeon — but, too busy playing bass in jazz band, King had skipped art in high school. When she went to Western Washington University, however, she knew that’s what she wanted to study. She concentrated on painting for most of her four years until she discovered printmaking her last semester, which spurred her to pursue graduate work at BYU. That’s where she took up installation and video work.

The flowers didn’t appear until Vernal. She went there with her husband, whom she met during her time in Salt Lake City. She was 29 by then, he already had a son — not your stereotypical LDS trajectory, she notes. He was a geologist and Vernal was experiencing one of its periodic oil booms. They lived in a one-bedroom apartment and she painted in the kitchen, at night. “That really taught me I can paint anywhere,” she says of working far from any art store, under terrible light, producing fairly large work despite the cramped circumstances. She still frequently paints at night, or whenever she can snatch some time, staying up till 2 or 3 in the morning, or working on Christmas Day and other holidays, anytime her husband has off work and can help with the kids. “I think if it wasn’t so hard to paint, maybe I wouldn’t do it.” If for nothing else, she’s proud of the work at the Alice Gallery for the simple fact that she was able to pull it off. “It represents a lot of sacrifice of my time.” It won’t be a surprise to learn that floral paintings sell a whole lot better than her satirical works. In fact, some of the objects of her previous scorn might now be buying her paintings on Etsy for their living rooms. “I’m like, do they know what I’m trying to say?” she comments. But she’s also come to a place where whether they do or don’t doesn’t matter as much. “I’m getting older and I’m like, who cares. I enjoy making it; it’s great to have people liking it. I know there’s more to it, it’s more intellectual, there are things I’m trying to put into the work, but if the viewer comes to it with something else, and they’re not getting what I’m putting into it, my ideas on femininity, that’s fine.”

In fact, King does not seem particularly eager to spell out what she is doing with these paintings. “Can’t you just look at the painting?” she asks of the rhetorical critic who would like her to explain her work. “That’s why I’m a painter, so I don’t have to ‘say’ it…” she comments, recalling her university days, when the need to talk about or write about one’s work was paramount. “Maybe I’m still immature,” she muses with characteristic honesty. “If I had to say it, I might not want to stand by it.”

She describes flowers, especially arranged flowers, as symbolic of a type of mask, and painting them functions as another sort of mask, allowing her to create work that interests her but is also attractive to a larger audience. Mostly, she’s just eager to paint, and flowers are an excuse to put paint — a lot of paint — on canvas. “I just want to make work. I love writing about art, I love thinking about art, all kinds of art, but sometimes it trips me up in my own process, to think too hard about it.” King worked in a florist shop one summer after moving to Ogden, so she’s been around plenty of flowers. But, botanists beware, she’s no literalist. These are approximations of flowers, “inspired by,” “based on.” She works from found photographs mostly, using them to get herself started, but then the paint takes on a life of its own. Some species may be recognizable, but King has assumed the role of Mother Nature, developing new genera if she needs an excuse to streak some ultramarine blue across the canvas, or work up a swirl of magenta.

Focus in on any individual portion of her canvases and you could easily see King pushing the works to full abstraction, a direction she says she may become “brave enough” to embrace. She’s open to all kinds of possibilities for the future. “I still love printmaking, I love making things out of clay, I’d love to experiment in those areas as well.”

One of the works at the Alice seems more muted than the rest, washes of black and gray infused in the painting, as if decay has begun to set in. Her husband came up with the title: “Bitumen.” “It’s kind of messy,” she says. “I like the idea of pretty flowers, but underneath it, I want to put some grit in it.” This tendency to go dark has characterized her career. “My mom is like, ‘Why can’t you just make something nice.’” Even during her undergrad she was “always doing people with scary teeth, a lady holding a dead chicken, fat ballerinas.” Those days seem to be part of the past, however. While some grit may remain, one suspects the anger is gone. That may be because, even if things aren’t neatly packaged up and resolved, Emily Fox King is settling in to a place she is comfortable with. The family bought their rambler in August, their first house. Like life, it’s a work in progress, evidence of remodeling apparent as one walks downstairs, where King’s studio is an alcove near a sliding door, the children running past a work in progress on her easel to play outside. It’s not that life is perfect, but King seems happy with her family — she’s a kind, attentive mother — and herself: “I’m the most out of shape I’ve been in my life,” she says, “but I like my body.”

And she’s happy with her art. “I have found support with the painting, with making object-based work.” In addition to the Alice show, she will be showing April 20-21 at the Utah Art Market at the Sugarhouse Garden Center, where you can expect to find more of her vibrant, riotous florals, and where you might want to keep in mind that artists like van Gogh and Matisse changed the art world with floral paintings. “I know you’re not supposed to admit it, but I love van Gogh,” she jokes. It’s a cliché, not the type of thing she would mention at the university, or if she did she would be sheepish about it. Or maybe not. “I need to keep blooming here, and be OK with who I am.”