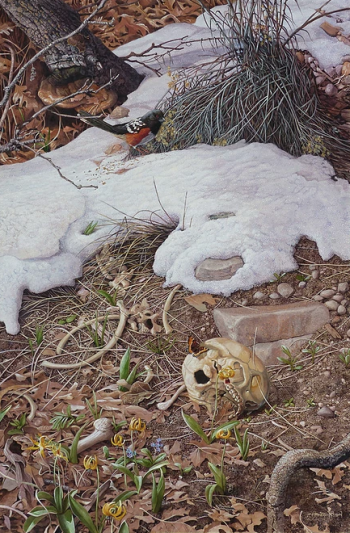 What does it mean to die well? With honor? With purpose? Bountiful Davis Art Center (BDAC) explores these questions with a new exhibit curated by Chauncey Secrist: Ars Moriendi. This latin term, literally “the art of dying,” refers to upheavals in Europe after the Black Death, and the development of a culture of death that focused on the many virtues that needed to be cultivated if one were to die well. This culture promoted lucrative death rituals for the Catholic church, which required an extensive blessing at the time of death and, eventually, the paying of indulgences, which would ultimately lead to the Protestant Reformation. Though this fascination with meaningful death began over 600 years ago, the concept of dying well still pervades our society, in our obsessions with being remembered, having our life “mean” something, doing some great good before we go. In Ars Moriendi, 18 Utah artists tackled the role death plays in our lives and if dying well is even possible.

For any art history nerd, no exhibition on death would be complete without at least one memento mori painting. Carel Brest van Kempen’s “A Circle Unbroken” is a photo-realistic acrylic piece depicting several momentos of death, from snow encroaching on the final hints of winter vegetation, to bones lying on a pile of dead leaves. The painting’s focus, however, is not death, but rebirth: a butterfly — a symbol of resurrection in early Christian texts — flies near the skeleton; young plants push through the dead vegetation on top; and a red breasted bird — a symbol both of death and life — surveys the scene. The painting speaks of a cycle, an acceptance that dying well means understanding and making way for new life.

Also notable as memento mori are Kendra Hitchcock’s oil paintings, both featuring bird skulls and berries, also speaking of death, rebirth, and renewal. Her paintings have a ritualistic feel, as if they are offerings burned on an altar, ancient traditions to bring about spring in the dead of winter. The titles “Solstice” and “The Offering” both speak to this, calling to mind midnight gatherings and community tradition.

Many of the works depict a coming to terms with death, the moment, real or anticipated, when it arrives. A large transfer ink drawing by James Rees, “Death and Rebirth in the Sonoran Desert,” best summarizes our understanding of death: a jumble of skulls and figures with arms crossed over their chests lie in a distant location. For the living, mortality is often like that: a far away location where dangers abound but remain surreal and intangible until the moment we experience it. 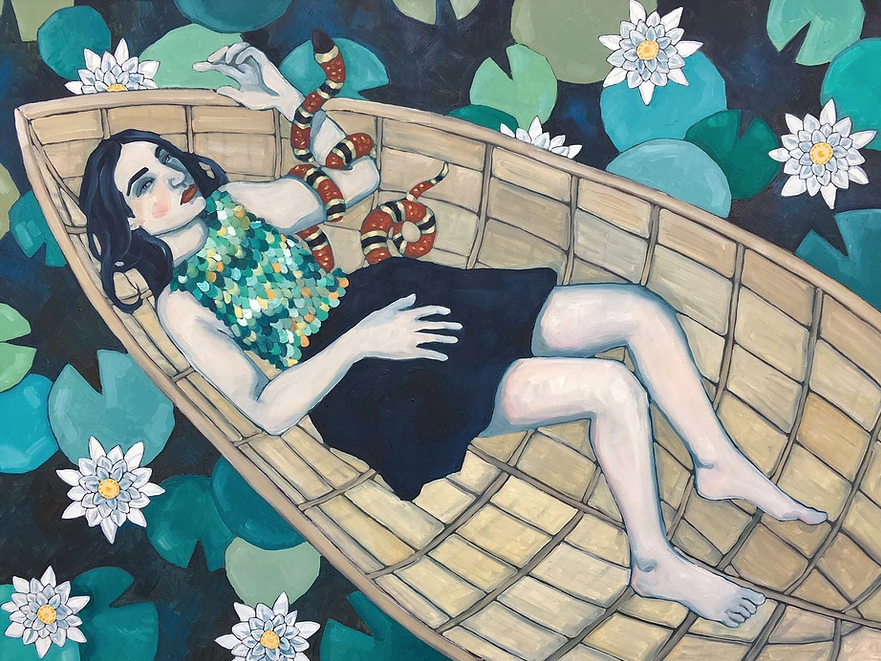 In Kelly Seim’s “Somnis Imago Mortis” a coral snake wraps around the arm of a woman in a boat. Coral snakes are notriously hard to identify, with a number of naturaly copycats who emulate the extremely venomous snake, including the scarlet king snake. This snake seems complacent rather than preparing a strike, as if it is no longer threatened. Meanwhile, the blush of the figure’s cheek suggests she is still alive, while the paleness of the figure and her blank eyes suggest she is already dead, her body stiff and unnatural: it can be hard to recognize, but death can come at any moment.

In Randall Lake’s “Me and Death” the moment is anticipated and embraced. A seasoned sailor grips the wheel while death guides him with a pointed finger. There is no animosity between the figures. The sailor welcomes death’s guidance, is about to push the wheel in the direction indicated. The painting is peaceful, accepting death as a natural part of life’s experiences.

A more conceptual musing on death is Dan Cumming’s “Reflecting on a Life Well Lived,” a new take on the found object, taking a normally macabre object and transforming it into something industrial but also kitschy. What appears to be a deer’s head and antlers is covered in chrome, which creates a surrealistic level of visibility into the structure of the deer head, making subtle cracks highly visible. Near the tips of the antlers the chrome begins to crack, reminding the viewer of the instability of their own memories of the deceased. In death, individuals become perfected, their wrongs lost to memory. We plate over the uncomfortable moments with shining memories, real or imagined, of exquisite happiness.

Cumming’s piece is complemented by Weston Lambert’s “Frozen in Time,” a copper cast of a ram’s head juxtaposed on a smooth, glassy surface. The copper cast is marred by a corrosive white residue. In this moment of decay it is reflected over and over again by the mirror background, suspended in regression as it hangs on the wall. The perfect circle surrounding the ram also suggests continuity, an unbroken cycle of creation, destruction, and rebirth.

Adding a bit of playful irony to the exhibition, “Oh the Places You’ll Go” by Hank Mattson is a wry, existential piece that turns the classic Dr. Seuss story on its head. The piece is separated into two sections. The top is a collection of abstract figures — perhaps a family — embracing a child while seeming to describe great possible adventures or excursions. The bottom section shows the reality of all of our fates: a grave filled to the brim with skulls. The bright, almost joyful colors in the top section fill the viewer with hope while the same yellow color creates a spotlight which draws the eye down to the fate that waits below. 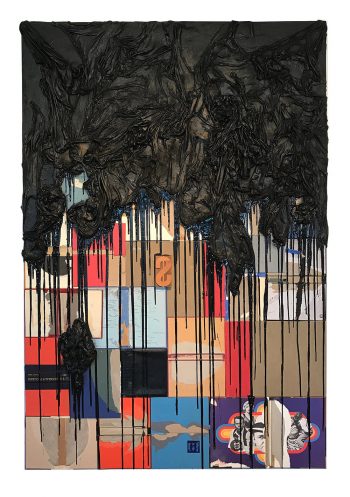 For many of the artists in the exhibition, death means going beyond the individual and becomes an opportunity to talk about broader political and sociological issues. For curator Chauncey Secrist, it is not just about the death that comes to us, but the death we bring. His “Reliquary of Violent Ideas” is made up of an animal skull, a lantern-shaped glass box, and a pile of bullet casings. The skull sits in the center of the box, in the place of honor where a holy relic would be placed. His sculpture doesn’t depict the act of violence, but chooses instead to show the aftermath, reminding us of the brutality of humanity, killing without necessity or repercussion.

One of the larger pieces in the exhibit is John Bell’s “Executive Order #4,” a highly textured multimedia piece of encroaching blackness. From the image itself, it’s difficult to know which Executive Order Bell refers to (the numbering system wasn’t used in government until the number of orders had reached over 1,000 during the presidency of Theodore Roosevelt) but one might safely guess it was Donald Trump’s, which basically prevented any sanctuary city from receiving governmental funding, efficiently excluding and killing public programs in our most benevolent cities in an attempt to force refugees back to their home countries. It is an ominous work, speaking to the death of American liberty as more and more presidents exercise their power to limit freedoms and exert their own will over the country. More concerning is the level of acceptance our country has for the morally bankrupt individuals who lead it, and the consequences on human lives. His work questions the dying of a country, asking if our country as we know it is dying and if it will be a noble death, recognized for virtue or vice.

Craig Cleveland’s multimedia piece “Thee End,” with its use of biblical language suggests a religious interpretation. Set in a lightbox and encased in an ornate frame, the piece is cinematic, like a callback to old school movies that greeted viewers when they entered the film and told them when it was over; a “That’s All, Folks!” message. The work states simply: “Thee End.” It seems a pun; the end, but also thee end, god’s end. For centuries our idea of death was conditioned by our ideas about God, but in an age where God has been declared dead, in a fast-paced, tech-heavy society, Cleveland’s work seems to wonder how do we now frame our thoughts on the subject? 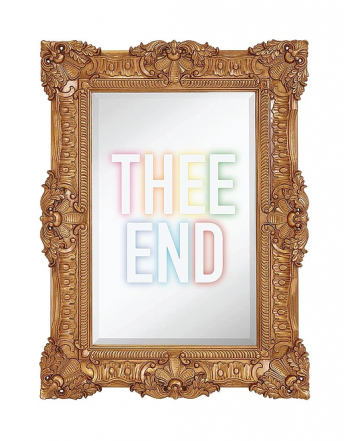 Perhaps the question of dying well is no longer a Christian issue, but a broader, human one. In East of Eden, Steinbeck wrote, “It seems to me that if you or I must choose between two courses of thought or action, we should remember our dying and try so to live that our death brings no pleasure on the world.” Instead of introspectively looking to our own attributes as a way of dying well, better considered is the effects we have on others, the good we do in our lives. Or, maybe, dying well is impossible. Death is the great equalizer. Suggesting that one person’s death is more important or better, we divide ourselves. Maybe we should just stop trying to create a hierarchy at the moment of death and let unity rule in the end.

Arts Moriendi (The Art of Dying), curated by Chauncey Secrist, Bountiful Davis Art Center, Bountiful, through Nov. 2. Throughout the run of the exhibition BDAC will host a series of free readings from Utah writers.