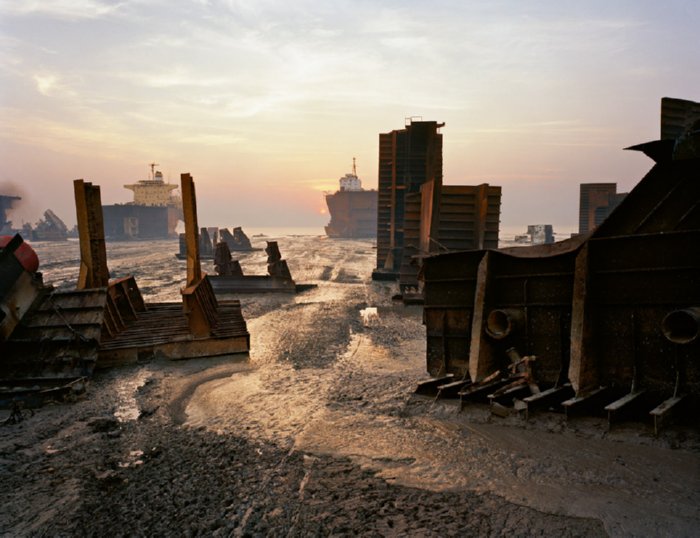 The Canadian artist’s large-format photographs exploring industrially-altered landscapes are collected by major museums around the world. He first came to attention with a series of monumental photographs depicting fascinating landscapes created by aggressive mining techniques, including images from Utah’s Bingham Valley. Since then, he has continued to search out areas where man’s insatiable appetite for fuel and manufacturing has dramatically altered the natural landscape. The beauty of his photographs is often in dialectical tension with the physical toll its subjects are exacting from the earth and its inhabitants: an oil tanker being dismantled in Bangladesh may soar across the frame like the skeleton of an ice age mammoth, but the laborers reducing it to spare parts can rarely work past thirty. Piles of coal, shrouded in dust, are an embarrassment to local authorities in China, but in Burtynsky’s lens they become a thing of beauty . 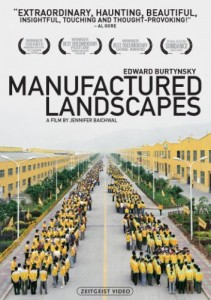 In 2007 Burtynsky was the subject of the award-winning documentary by Jennifer Baichwal entitled Manufactured Landscapes.  The film follows Burtsynsky as he investigates subjects in China, from the monotony of factories in the country’s manufacturing belt and the piles of rubble filled with heavy metal that provide income for recyclers, to construction booms in cities like Shanghai, and the massive Three Gorge dam project on the Yangtze River. With minimal voice-over and splendid cinematography that acts as a moving twin to Burtynsky’s still images, the film reveals Burtynsky’s artistic process, uncovers his environmental concerns and lays bare what lies beyond the photograph’s frame.

You may already be familiar with Burtynsky’s work. When Manufactured Landscapes screened at the Sundance Film Festival in January of 2007, Burtynsky’s photographs were featured at Park City’s Julie Nester Gallery; and in December of 2009 the Salt Lake City Film Center screened the film at the Salt Lake Art Center. If you didn’t have a chance to see the film then, you might try to find the DVD at your local library (the Salt Lake City library has three copies). You’ll be able to see Burtynsky’s work at the Shaw Gallery in Ogden through November 22nd. Edward Burtynsky will give an artist talk Friday, September 16, at 6 pm, with an exhibit reception immediately following.