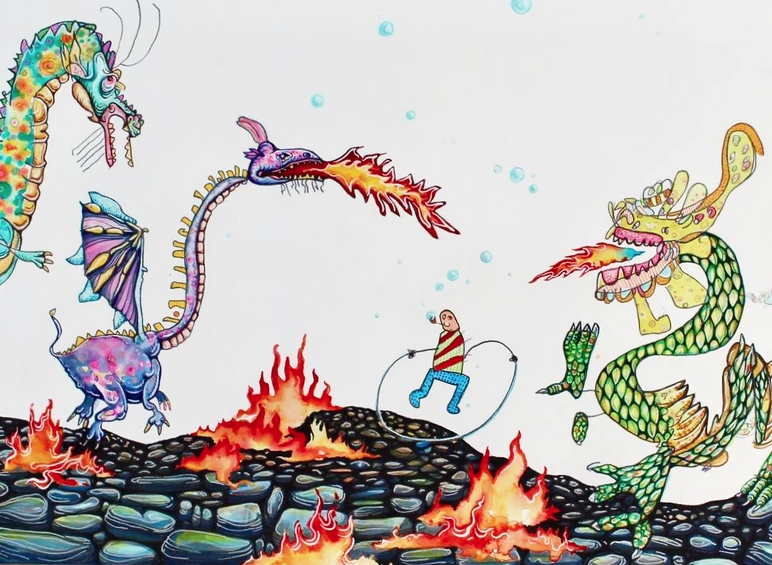 Collaborative piece by Chad Crane and his children

We lose something in technical drawing. Kids draw fearlessly, without worrying about whether it is “good”; but as we get older, we lose that sense of confidence and ability, and we either grapple with the pencil, forcing it into precision, or we put it down. At Bountiful Davis Art Center, Dylan Barbour and Chad Crane have picked it back up, each exploring unrefined art for their own purposes: as a way to comment on our political system and philosophies, or on the loss of confidence that happens as we move from childhood to adulthood.

After World War II, “low art” was adopted by artists as a coping and depiction mechanism. Artists like Jean Dubuffet turned to a new style of colorful, childlike illustrations to express the magnitude of shared trauma. His work was inspired by art brut, the “raw art” created by children, prisoners, psychiatric patients, and others working outside professional artistic settings. Dubuffet’s work has influenced other artists, and in some cases inspired gallerists and curators to purposely search out the untrained for their raw work. 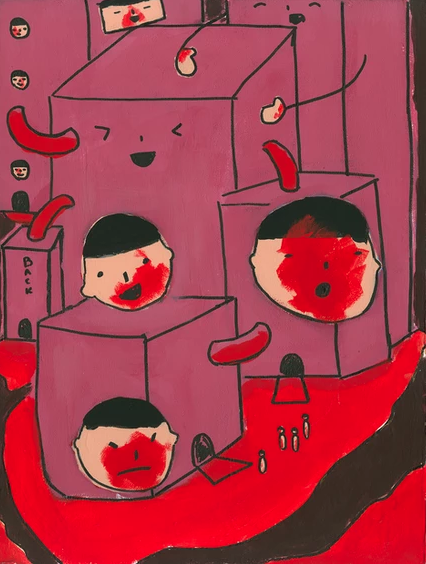 A new form of video art brut for Millennials emerged in the early aughts with the birth of YouTube. Videos like Charlie the Unicorn, the ASDF movies, and Llamas with Hats were two dimensional, simplistic illustrations with dark undertones wildly popular among younger Gen Xers and Millennials. In many ways, modern meme culture and cartoons like Adventure Time or Gravity Falls are extensions of this early video movement. The work of Dylan Barbour (not to be confused with the contestant from The Bachelor) seems directly inspired by these early YouTube series, with their bright red blood collecting in pools beneath black-outlined characters.

Barbour’s DOORS1 is a narrative exhibition set in a two-dimensional world of hidden horrors. His paintings look like “shitposts” on a 4chan or Reddit thread: cartoons with added social commentary. In DOORS1, Barbour introduces us to several different characters, and even includes an index of the most common. As the exhibition title suggests, each painting contains a door, showing these ideas to be all interrelated, inhabiting a critical space of philosophy, politics, and capitalism. Barbour’s “Snakes in Line (Snakes Waiting in Line for Money at a Window in a Totalitarian Society Controlled by Shirts)” could be a comment of capitalism, on the drudgery of a bureaucratical society where everything is run by people wearing collared shirts, or simply an exercise in absurdity. He does not provide an interpretation but instead allows the viewer to proffer their own. Similarly, Barbour’s “Bird Trafficking (Birds Selling to Other Birds)” definitely has a political and moral statement embedded in the image, though it’s not exactly clear what. Perhaps a commentary on modern slavery or even how we are all trapped in a product-obsessed society? Maybe. But the vast field of yellow chicks might also call to mind the Charlie Brown comic strip character Woodstock having a boom box party with some buds. Meaning will likely come from whatever interpretive context or obscure reference the viewer brings to the exhibit. 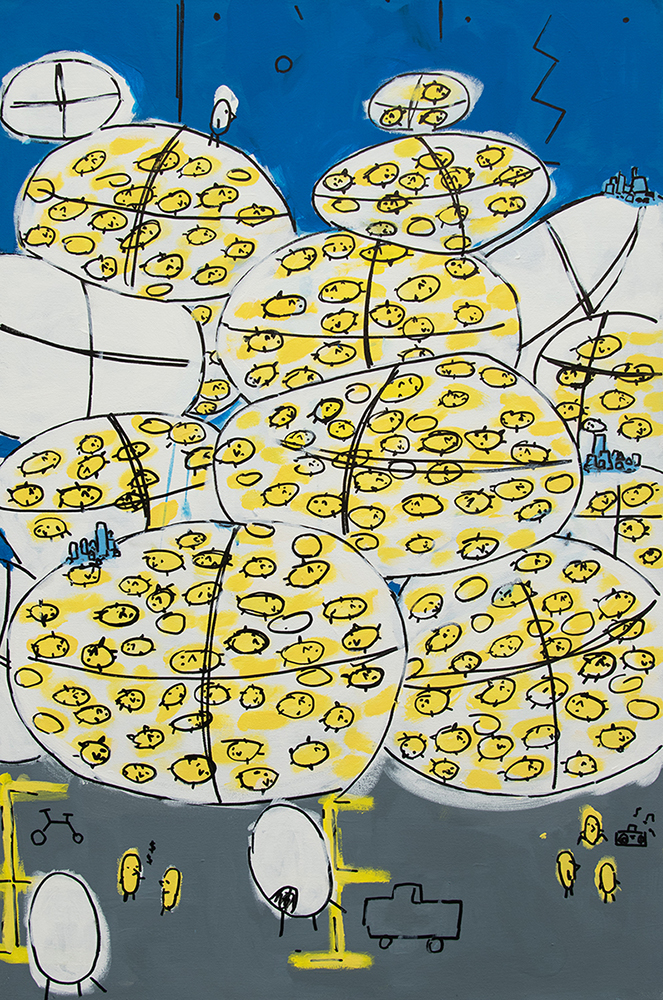 The dark, cryptic images of Barbour are offset by the lighter side of art brut in Chad Crane’s exhibition. Father of four, Crane uses the drawings and experiences of his children to capture the magic of childlike imagination. There is something fascinating about the drawings of children: with little regard for scale, realism, or color scheme their artwork is often fun and unencumbered. Chane’s “Too Many Toys in the Bath” is a collaboration with his children, alluding to a common parental experience of a tub so full of toys it can be hard to wash your child.The painting is a fanciful scene of sea monsters, dolphins, and fish with a boat tossed among the waves. Elements of the composition, like the sun and clouds in the corner, are painted in classic elementary-aged kid fashion. The orange center of the sun is surrounded by radiating lines and the harsh outlines of the clouds contrast starkly with the yellow sky. The experimentation of scale gives the underwater scenes a larger-than-life feel as if you are also a child, swimming in the bath, feeling sea monsters nipping at your toes. Crane’s other collaborative works feature everything from goldfish to animals, including “Different in a Good Way,” a piece by Crane and his daughter Lucy. One bee in this piece is drawn in a very technical way, but there are also a few unrefined bees with fat bodies and diagonal stripes. Though the largest bee has an oval body, a 2-inch stinger, and very short wings, it still captures the essence of a bee. The technical drawing may look exactly as a bee does in the wild, but the others encapsulate the furry, adorable, and slightly dangerous bumble bee we learn about as children and come to love. 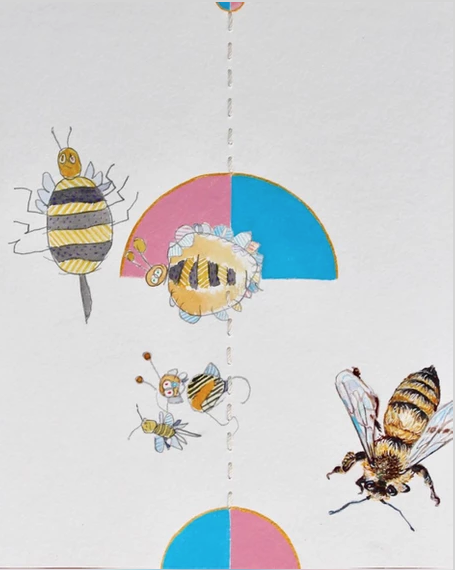 Chad Crane and Lucy Crane, “Different in a Good Way”

Whether to explore the moral failings of our modern society or to enter a world a fantasy, taking a step back from highly technical drawing is a tactic many artists use to find their niche. Though different in tone and context, the works of Barbour and Crane create an interesting conversation around inspiration, depiction, and visual language.