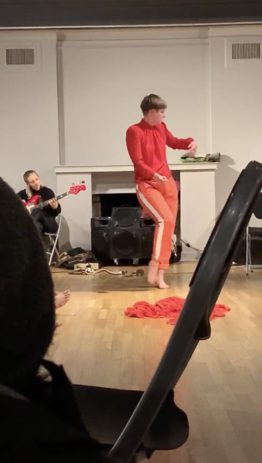 After an opening performance on March 3 and a five-day exhibition at Finch Lane Gallery, Back and Forth Part concluded with an interdisciplinary closing performance. For nearly three hours, the Salt Lake City community gathered for an evening submerged in film, multi-media sculptures, music, and dance.

I was drawn to the way this project spanned several days and invited the audience to revisit these themes during a unique, final performance. Essentially, the audience was invited to come “back and forth.” This invitation allowed the community to step into the process — we could explore what it was like to return to an artistic idea. This structure facilitated an awareness of the passing of time and what it leaves behind.

As I entered Finch Lane Gallery, I was drawn to the segmentation of space, based on the life span of the art. The back gallery housed the sculptures, art objects, and film, while the performances existed in the entry gallery. Between these two rooms, I moved between permanence and change. I began to consider the ways that different types of art are bound by time. One of the sculptures, entitled What They Become When They Stop Moving, was a snake of pointe shoes originally used by Katie Steiner and Sammi Harmon. The art seemed calcified like a pre-historic relic, even though the dance had long since dissipated into the past.

The performance began with the band The 8eaut!ful5, an electronic group with five musicians on violin, cello, drums, and electric guitars. The set began with a vibrational essence where a couple of notes were strummed repetitively bringing a groundedness to the room. The 8eaut!ful5 carried us to several different climaxes; the energy spiked with a chorus of yelling, descended to a gentle melody, and intensified once again. I looked around the gallery and noticed people closing their eyes in deep concentration, some bobbing their heads to the beat, and others sitting on the floor while swaying their shoulders. I felt utterly enthralled in the atmosphere of the music and its pulsation in the air.

After a brief transition, a group of Salt Lake movers began a dance improvisation score. The costumes featured an odd array of similarity and juxtaposition. Emmett Wilson, Josephine Bluemel, and Meagen Bertelesen wore almost matching, bright red clothing that featured an airy shawl and leopard print. While Hannah Kiel wore an outfit of neon and reflective pieces and Samuel Hanson had a dazzling, gold, speckled sweater.

The improvisation work was inspired by Sara Shelton Mann, who is an improviser based in San Francisco who is known for cultivating energetic realms and physical contact. All five dancers brought a unique essence to the physical landscape. The play of solos and duets offered intriguing layers of combinations. I found great joy in noticing the subtle difference and similarities in the partnering that appeared simultaneously. At one moment Hanson glided in the air suspended by Bluemel and then quickly dove across the floor with great velocity, while Wilson and Bertelesen engaged in a tender stroking, rolling, and embracing duet. At the same time, Kiel cut through the space with a staccato solo that moved in and out of the floor with a striking combination of ease and power. David Payne’s raw voice sung, “You are floating. You are the earth. You are floating,” that lingered in the air. And I felt almost as if I was floating in this moment, my senses completely enlivened. At times, I wished the dancers would make slower choices and allow moments to extend. However, throughout the duration of the score, my attention was totally captivated. 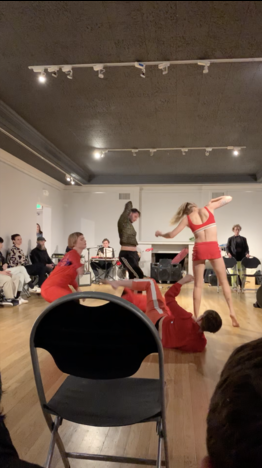 The last part of the performance featured Durian Durian; Nora Price and Emily Snow moved in and out of their role as musicians and dancers. Their movement was reminiscent of their screendance made in collaboration with filmmaker Dawn Borchardt on the Salt Flats. Their movement in the gallery offered sparks of familiarity as their gestures, shared touch, and footwork echoed the film. In the last moments of the show, band members, Koty Lopez and Payne produced a driving beat, Price sang with force, and Snow articulated her arms in swirling billows as her feet skimmed across the floor with grounded ease.

What remains after the art has ended? This question hung in my mind after the performance had concluded. Sometime it is a scuffed pointe shoe, some left-over DIY merch, or a film that can be replayed over and over, and other times it is crowd of people buzzing with the energy of live art, community spaces, and good conversations. Back and Forth Part left us with all of these.