Durian Durian at the Art Barn (Part One) 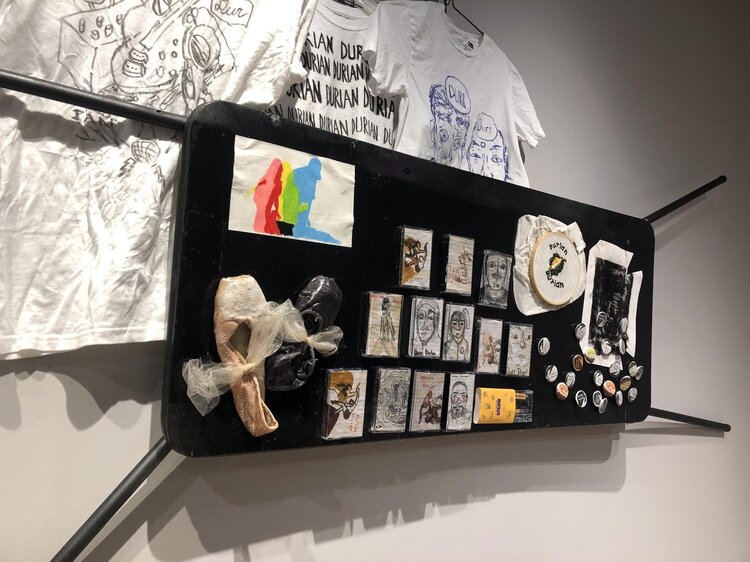 Salt Lake City Art Council’s Finch Lane Gallery feels both cozy and spacious as I enter to watch The Back and Forth Part opening reception on Tuesday, March 3. The space has started curating more interdisciplinary works, specifically with an interest in time-based or performance art. Their decision to host a collaboration between Durian Durian and Dawn Borchardt felt like a fitting way to launch these Flash Projects (there will be two more events later in the year).

A gallery display in the first room discusses the origins of Durian Durian and their interest in blending dance forms with live music performance, as well as the “DIY” aspect of these artistic communities. The gallery space houses different art objects exploring these concepts, including a long snake of pointe shoes, starting at jet black and fading into a classic pink with the dusting of salt crystals on top. Another piece weaves items like TheraBands, Lambs’ Wool, and pointe shoe ribbons into a pastiche of different dance objects. The gallery simultaneously rejoices in the traditions of ballet while also attempting to deconstruct them.

The performance aspect kicked off with a showing of the film created by Borchardt, a filmmaker new to Salt Lake City. Shot in the Salt Flats, the film splices together footage of Durian Durian performers Emily Snow and Nora Price as they dance smooth, almost meditative movements, mirrored in the sound score. Rarely touching, when they do partner, it tends to involve their hands. Borchardt focuses on close up shots of their bodies, creating an intimacy through shots of elbows, torsos, hands, and feet. Price and Snow find many moments where their momentum rocks from one foot to the other like a pendulum. This repetition lends itself to the title of the series: The Back and Forth Part. As I watched, I found myself wanting to see the two connect further. This gave each moment they would touch heightened power, although I still felt it could be explored more. The film clearly appreciates the moving body as well as the expanse of the natural landscapes of Utah, allowing for connections to be made between body and earth. 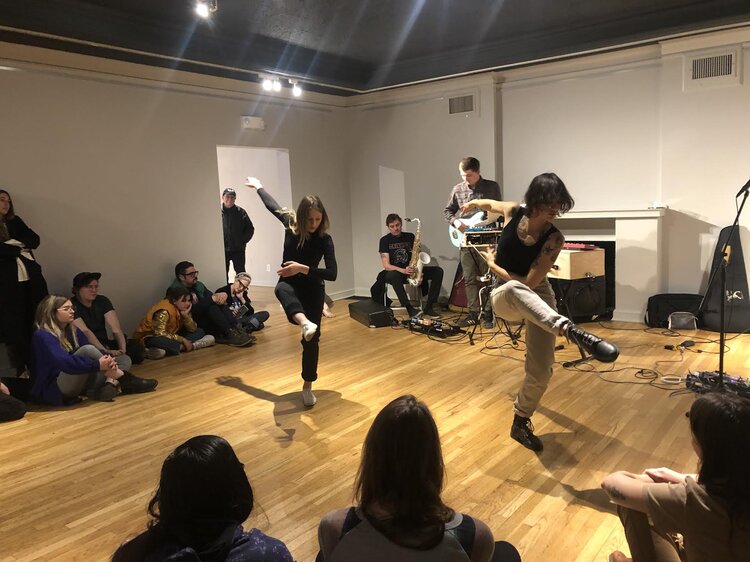 Once the film concluded, the audience was directed into the first room, where the band set up to perform. Joined by band members Koty Lopez and David Payne, Price and Snow performed both as musicians and as dancers. Their distinction between the two roles was set up by space, but the transitions felt natural and fluid, which allowed for a conversation between their bodies and the sound score. I found myself watching Lopez and Payne—who were not “dancing” from a traditional standpoint—and contemplating how their fingers tickling their instruments, their feet tapping out rhythms or adjusting sound boards, were part of the visual performance, too. Price and Snow performed the movements from the film, allowing the audience to see the difference in form from screendance to live performance. The music and movement worked well together, staying tonally similar, although there were moments of rapid repetition and satisfying stillness in the dance realm.

Overall, the evening was a delight—a fresh collaboration that clearly was committed to craft without feeling heavy or overly maudlin. The performers spoke casually and freely with one another, breaking the barrier that proscenium stages often enforce. The gallery setting worked incredibly well for the evening, as it allowed for flow from one room to the next, from one medium to another, and from performance to conversation. I wish I had seen slightly more connection between the gallery space and the movement vocabulary, although perhaps it’s simply enough for them to sit side by side. Price and Snow did dance with the snake of pointe shoes and another Marley piece, but it felt separate from the film and band sections, which were impeccably cohesive. The concept of the Flash Project supported the interdisciplinary artistic endeavors Durian Durian sets out to achieve, which Borchardt captured and presented wonderfully in her film. I’m excited to see how the group continues to meddle with medium going forward, as they certainly have demonstrated the chops for it. 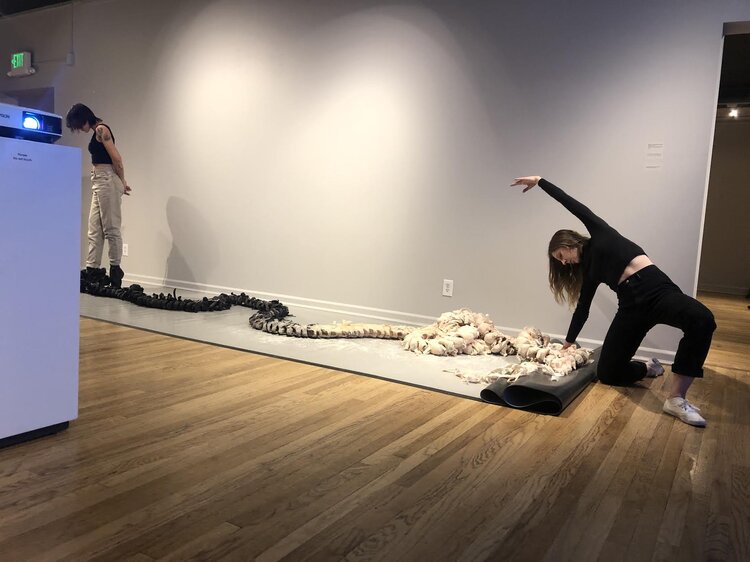 Price and Snow dance with their ballet shoe installation

Aileen Norris is a Salt Lake City-based freelance dance artist. She holds an honors B.F.A. in Modern Dance and a B.A. in English from the University of Utah. She is a co-founder of Queer Spectra Arts Festival, and currently teaches, performs, and choreographs in the Salt Lake community.