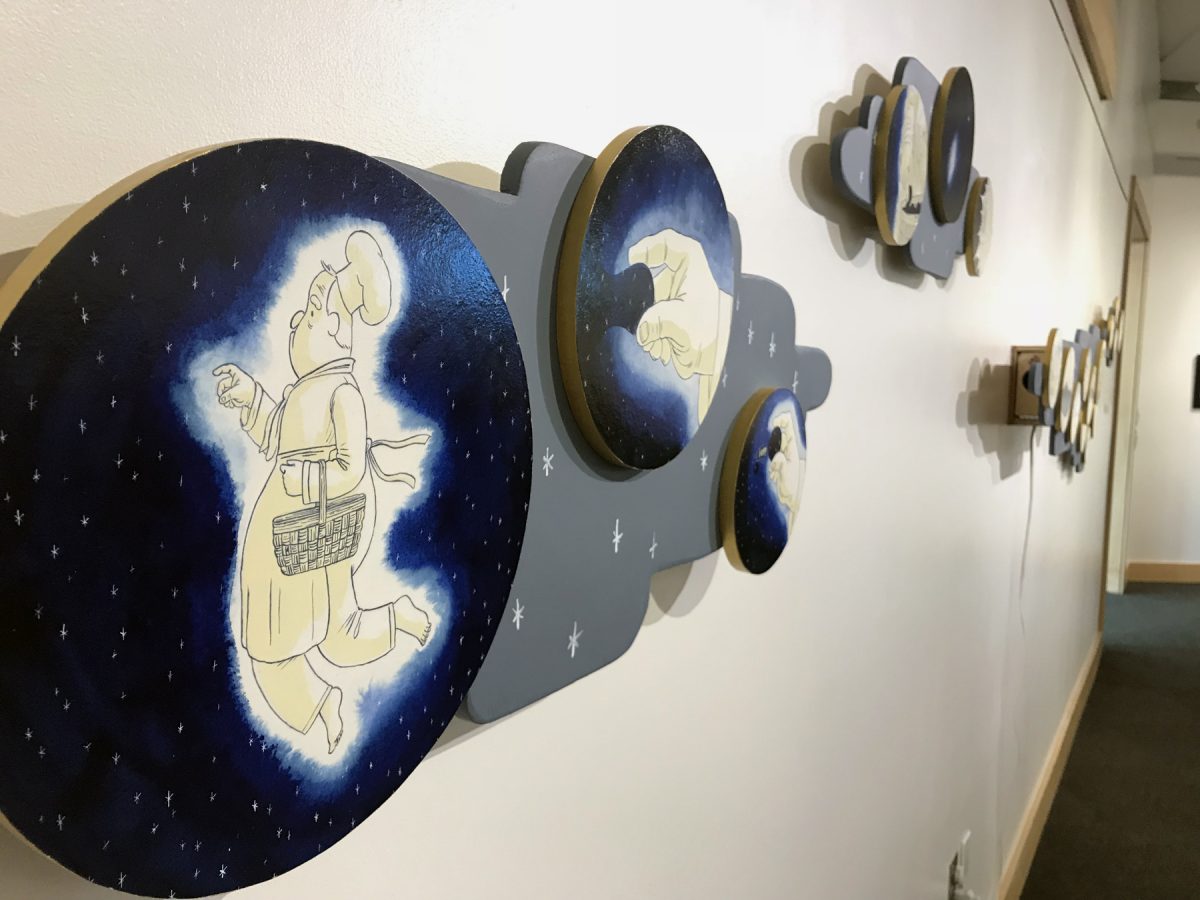 Ryan Perkins’ great-great-great-grandaddy may have been Brigham Young’s brother, but he’s not sure. So begins his artist statement for Parallel Lives, Misremembered Pasts, Revelation, Heartbreak & Lore, Perkins’ exhibit currently at the Gallery at Library Square. Which seems rather flippant or careless for an artist statement. And yes, that sense is probably a desired effect, but that one line may also reveal quite a bit of what Perkins is about in this exhibit. It says he’s a local boy, for one (in fact, rather than simply saying he’s from Salt Lake City, Perkins goes on to claim Sugar House as his ‘hood, an embrace of hyper-localism and sense of place); and makes a nod to the Mormon history and folklore of the state, with its emphasis on religion, prominent leaders and family relationships. A nod, but not a serious one.

Perkins has a degree in sculpture from the University of Utah, and splits his time between the digital — to pay the bills he works as a graphic artist at the Genetic Science Learning Center at the University of Utah where he creates illustrations and animations to explain scientific concepts — and the physical — feeling compelled, in his free time, to make art, he creates prints, sculpture, and furniture, all with a quirky sense of humor. In writing about Perkins’ Westish animations in a 15 Bytes article in 2013, Geoff Wichert pointed out that the elements of his stories are not clearly defined nor explained, and don’t need to be — that seeking out an answer might even ruin the comic effect. That strategy doesn’t satisfy in the library show, however. These pieces feel like they hold a hidden knowledge, even if it’s only an inside joke that might be illuminated if we only knew a little bit more. 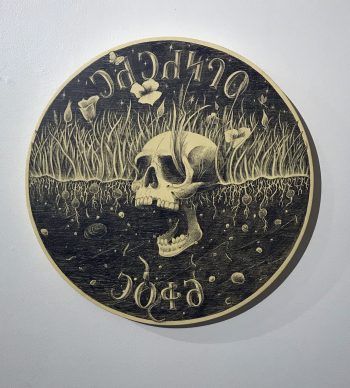 Almost all the works employ the Deseret Alphabet, a phonemic alphabet developed under the direction of Brigham Young that was intended to help the diverse immigrants coming to Utah from Europe and the Pacific Islands learn how to speak English. It’s a trope other Utah artists have used: it’s ubiquitous in Bob Moss’ work; Ed Bateman has used it in his digital prints; and Trent Call sprayed it on his Acme Co. mural on 600 West (look at the latter and imagine if Deseret had become its own nation, and our billboards, buses and street signs were all bearing the script). The alphabet was short-lived (it was pushed for about a decade), ultimately a failure, and the average member of The Church of Jesus Christ of Latter-day Saints (you know, Mormons) won’t even know of its existence; but it has become a sort of shorthand for visual artists, a nod to the quirky history and folklore of the Beehive State — “Mondo Utah” in Trent Harris’ terminology.

In Perkins’ work, it may not appear to be much more than that. Take the time to translate the Deseret glyphs that appear on the work (Perkins has supplied a pronunciation table for the alphabet) and you’ll find that, in most cases, he’s simply spelling out the title of the piece. So, in a tondo work where a skull lies half buried in the soil, grass growing through the eye cavity, the Deseret characters spell out “Memento Mori,” a textual gloss that doesn’t provide anything we couldn’t have already gleaned from the image itself. 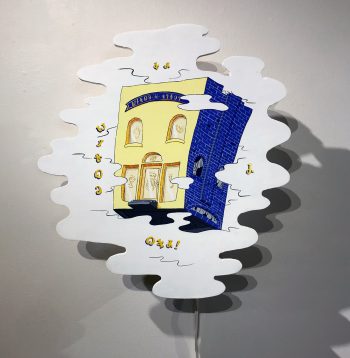 Things are opened up a bit more in “Whiskey Street,” where the phrase “Whiskey Rye I Cry” (if my Deseret is correct) is spelled out around a two-story saloon, which bears the name “Whiskey Street.” A quick Google search reveals an establishment of that name in Salt Lake City whose website explains that they took their moniker from a stretch of what would become known as Main Street filled with bars and liquor stores, where even Brigham Young was known to purchase his spirits.

“Flame of Death, Fire of Light” is spelled out around the image of a white salamander in the work by that title — a reference to the supposed occult qualities associated with the salamander, which, in local terms, leads us to the deadly Mark Hofmann case of the 1980s and a letter about the origins of Mormonism that turned out to be a forgery (though, as LDS historian Richard Bushman has explored in his Joseph Smith: Rough Stone Rolling, the folk magic milieu of the prophet’s life it was based upon is true enough). 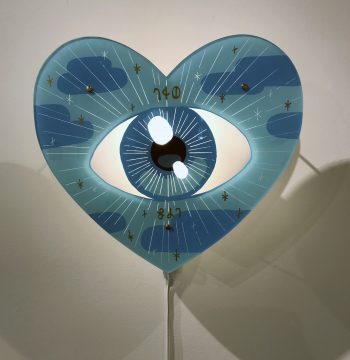 The “True Sight” title of another piece might suggest a similar folk-magic reference, though it could also refer to a magic spell in the popular role-playing game Dungeons and Dragons which has received renewed attention in the Netflix series “Stranger Things” (the spell provides the ability to see the world as it really is). In this work, however, the visuals are saying as much as the text. “True Sight” is an illuminated sculpture showing a single eye, suggestive of The Eye of Providence, or all-seeing eye. In Perkins’ case, however, the surrounding triangle, meant to symbolize divinity, has been transformed into a heart shape: God is Love.

The most ambitious piece in the show is “Starman,” a multipanel comic narrative. Read left to right, the work shows a cosmic baker traveling through space, plucking out a pinch of the cosmos, taking it back to his planet, mixing it with dough, forming it into the shape of men, baking them and then, “Kerploom,” sending them off into space in the final panel. If things are quiet enough in the gallery, you’ll also catch the faint recording of a choral piece. It’s the LDS hymn, “If You Could Hie to Kolob,” which references the name, identified in the LDS scripture, “The Book of Abraham,” of the heavenly body closest to God’s throne, i.e. his home. It’s a rather marginal piece of Mormon theology — you’re unlikely to hear mention of it during Sunday School at your local wardhouse (though it was used to name a canyon in Zion National Park) — but Perkins’ visual narrative is a succinct if not particularly reverent rendering of the LDS concept of pre-earthly creation: the forming of existing “intelligences” into spirit beings that are then sent to Earth to receive physical bodies. 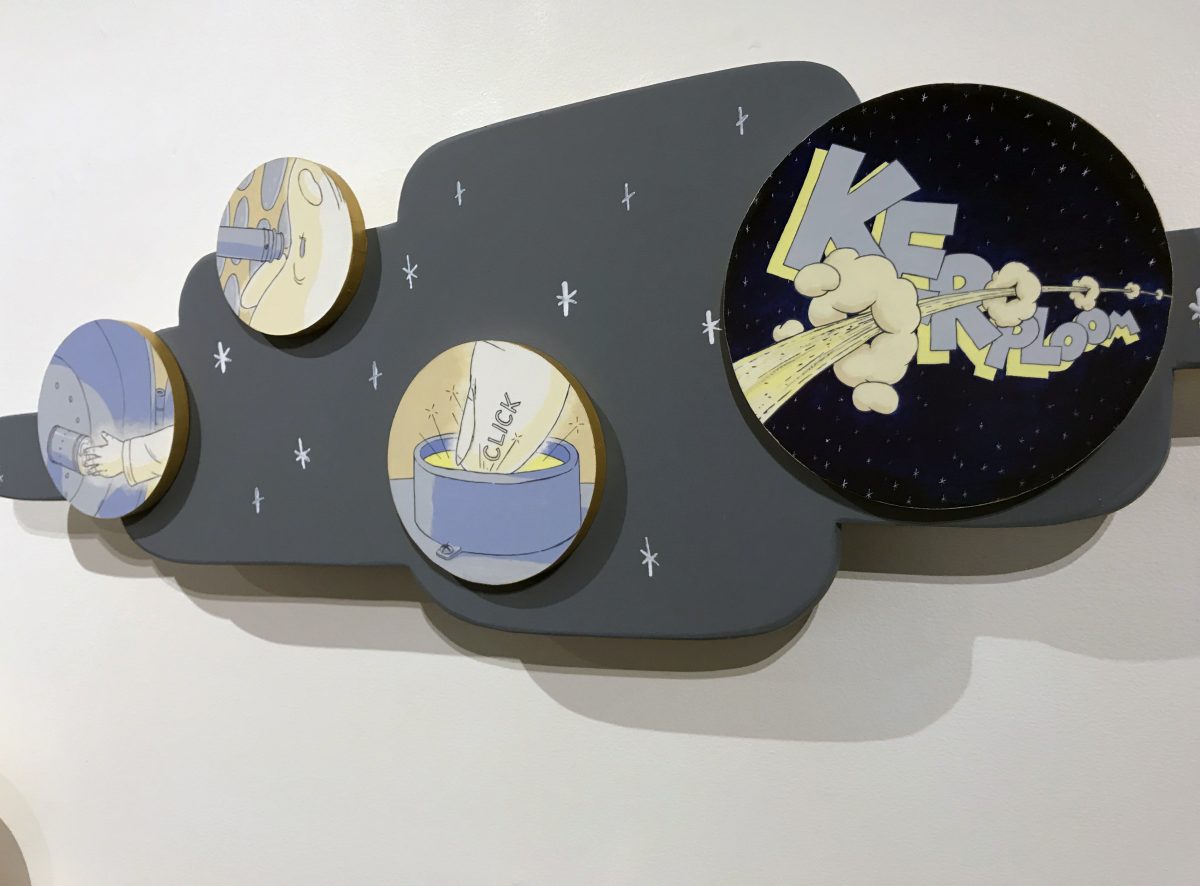 The final panel of “Starman.”

Mark Twain said that no religion could survive ridicule, which may be why religious people, even ones known to engage in self-deprecating humor, bristle when their God or religion is spoken of in anything but hushed tones. But ridicule doesn’t seem to be what Perkins is about. He’s poking fun and making light, but it seems to be done in a fairly convivial spirit, with an embrace of the history, people and culture of this place that he says is “a little bit strange.” But he also admits that it’s “awful tough to beat.”