“Windows” encaustic, mixed media, 36 x 96 in. sold from the window of 15th Street Gallery, in the Sugar House neighborhood of Salt Lake City

When we call for Doug Smith’s contact information, 15 th Street Gallery Director Lucy Heller tells us one of the artist’s encaustic works just sold “for $10,000, right out of the window.” By the time we reach Smith, the same buyer has purchased an additional, smaller piece of his from the gallery.

That he has reached someone through his work seems to move him; Smith says he found solace in art when he lost his youngest son, Garrett, 26, swiftly, freakishly – in a 2011 avalanche in Utah’s backcountry. 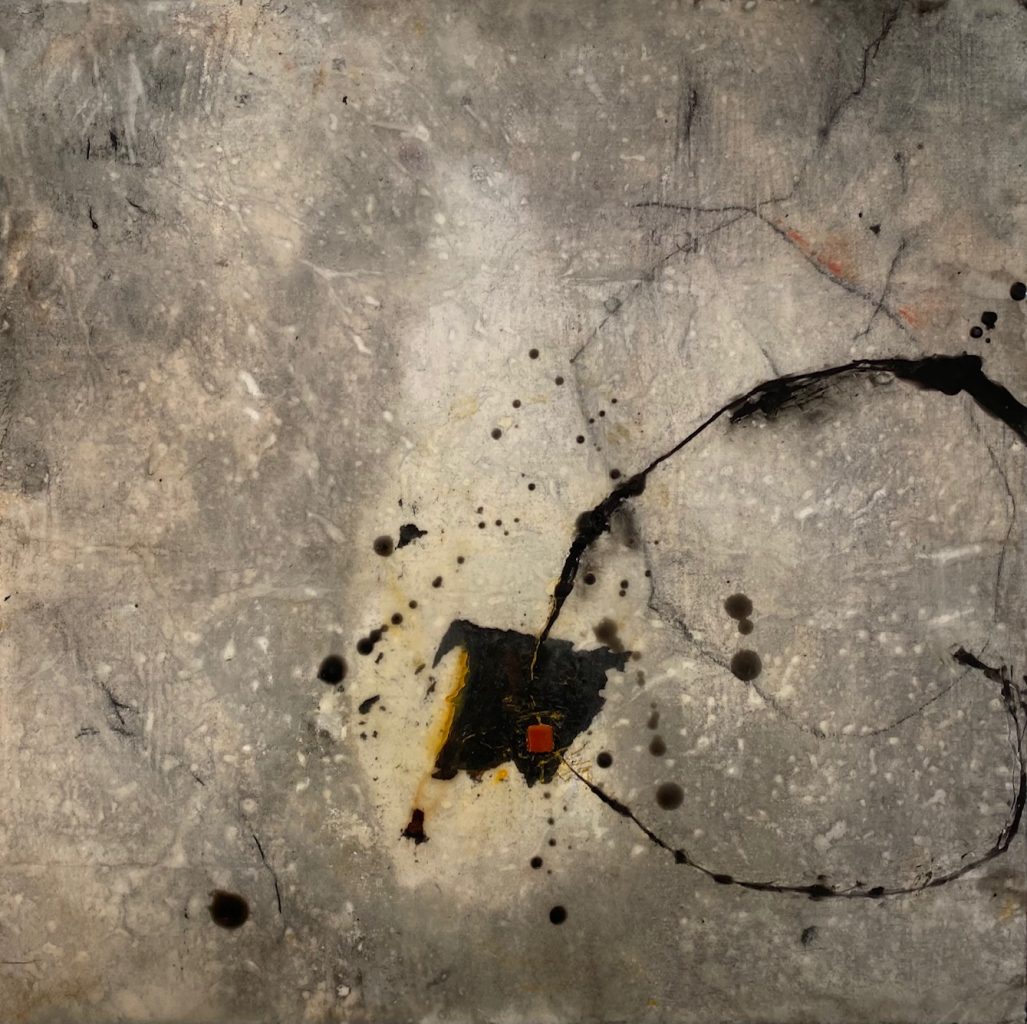 “You know, when you lose a kid, you’re going to go through a couple of years of a lot of reflection,” Smith says. And it was during that period that he saw a notice for a workshop with noted Utah encaustic artist Jeff Juhlin. “He’s a wonderful teacher,” Smith says of his teacher and friend. “Jeff has been generous. I deeply appreciate that and his instruction, here and in Maui, that have helped propel me to where I am now.”

“I fell in love with the process … it’s kind of an odd art form in that you are painting in wax, and it’s white beeswax that you put a hardener in which is sap that drips out of trees in the West Indies and it’s damar resin. You smash it up into a powder – you infuse it into the wax with heat – you strain it, you get out all the bark and insect wings, you get out all the crud, you get it down to a purified state — and that’s where you start,” he explains.

Born and reared in Ogden, where most of his family still resides, Smith says his background and education were in “normal stuff”: design and space planning. He studied at the University of Utah and BYU, graduating in 1977 from Woodbury University in Los Angeles with a bachelor’s in design and business.

He took that first workshop in encaustic about 10 years ago, after his son’s death. Then, six months later, his wife collapsed of a stroke, was left paralyzed and needed to be taken care of in a care center. “So, suddenly I’m living alone, and it was kind of a hard time,” he recalls.

“At 1 in the morning, when I couldn’t sleep, I would go down into my studio — encaustic is a very demanding artform. You’re doing the abstract right-brain design part of the painting but also the engineering part: how the thing is structurally going be layered . . . you might want transparent layers over there and opaque layers over here, and here you are putting horsehair or rust particles or lines or oil paint into etched art,” says the artist. 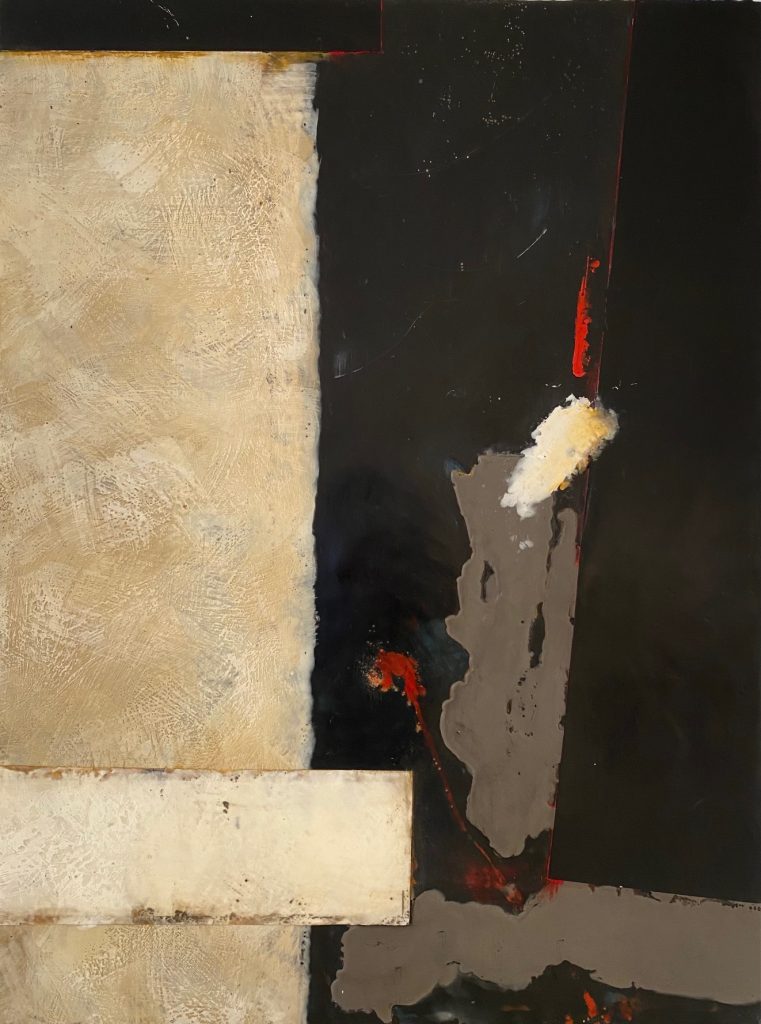 “So, where you put your mark-making you have to engineer that so the painting will stay together, and you don’t have layers breaking off.” says Smith. “I love the medium because you can carve it out, you can build up . . . Most of my work is mixed-media encaustic, meaning that I will layer paper in or horsehair or textiles or all kinds of things and you’re layering wax over the top of that and then you are excavating — or etching — on top of that to get certain shapes, lines, and so on.”

Within a decade of his son’s death, and a year after his wife died in 2015, another son, McKell, suffered a fatal stroke. Medical bills engulfed the family home. Then there was the loss of a business and of a good job. “That’s been my trajectory,” says Smith. “Prior to COVID [art] was kind of an avocation for me. Interestingly, the past 11 months have afforded me time to seriously dig into this. I’ve been producing a massive amount of work and the show 15 th Street Gallery has up is the third in about three years. I had been teaching workshops in Park City up until COVID.” 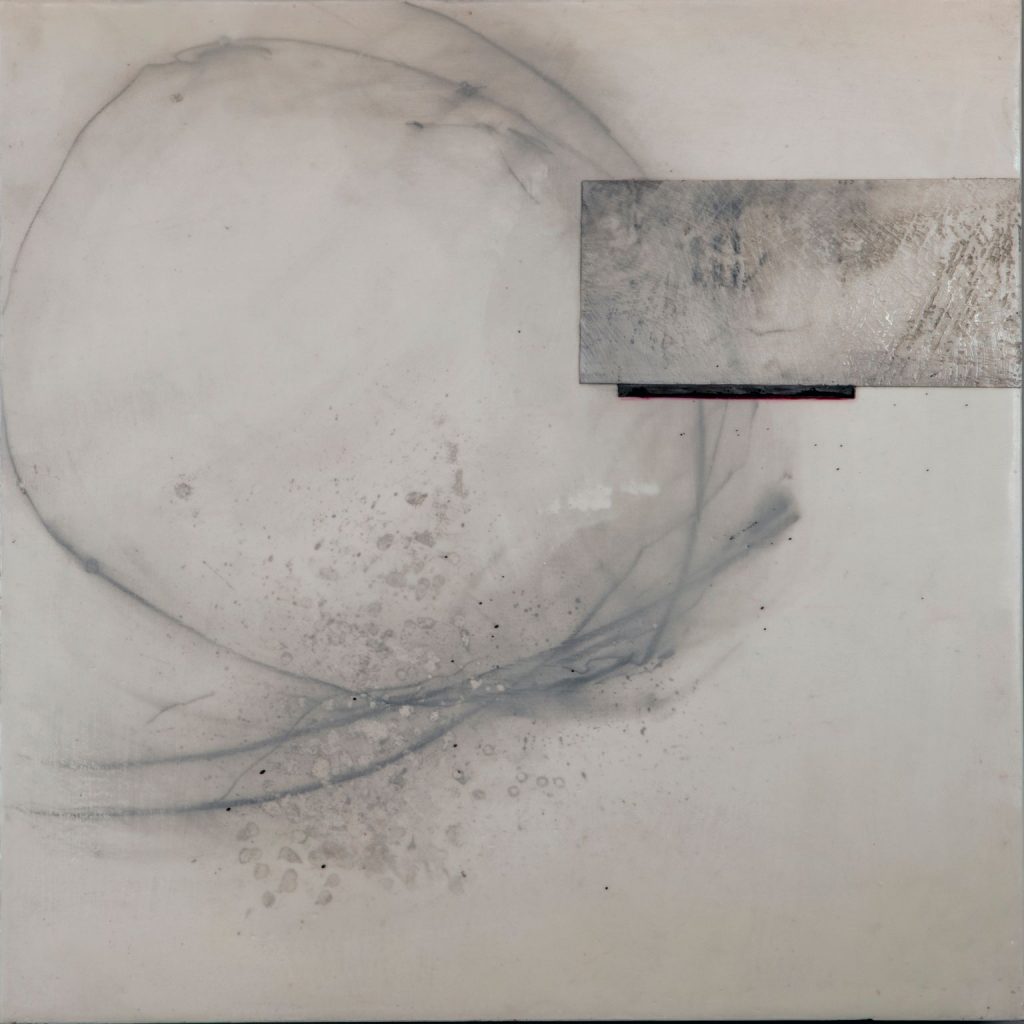 Doug Smith is determined that art is going to be a huge part of the post-COVID phase of his life. He wants to teach design and space planning and hopes to paint more in acrylic as well — he has a few acrylic works in the current show.  “But I prefer encaustic to acrylic, at least right now. It will probably be a year before I have enough [acrylic paintings] to do a show,” he observes.

Things are better these days, he says. He has a mid-century modern home (1962) that pleases him, and says he hopes not to go back into his old job creating events: “I don’t want to go back into a meeting every day post-COVID,” he says.

“I just put in seven years as a board member of The Road Home, and four years with the Rape Recovery Center,” time he considers especially well-spent. “I see that in this last phase of life I will be doing things that are soul-satisfying. Life is more meaningful now than it ever has been.” 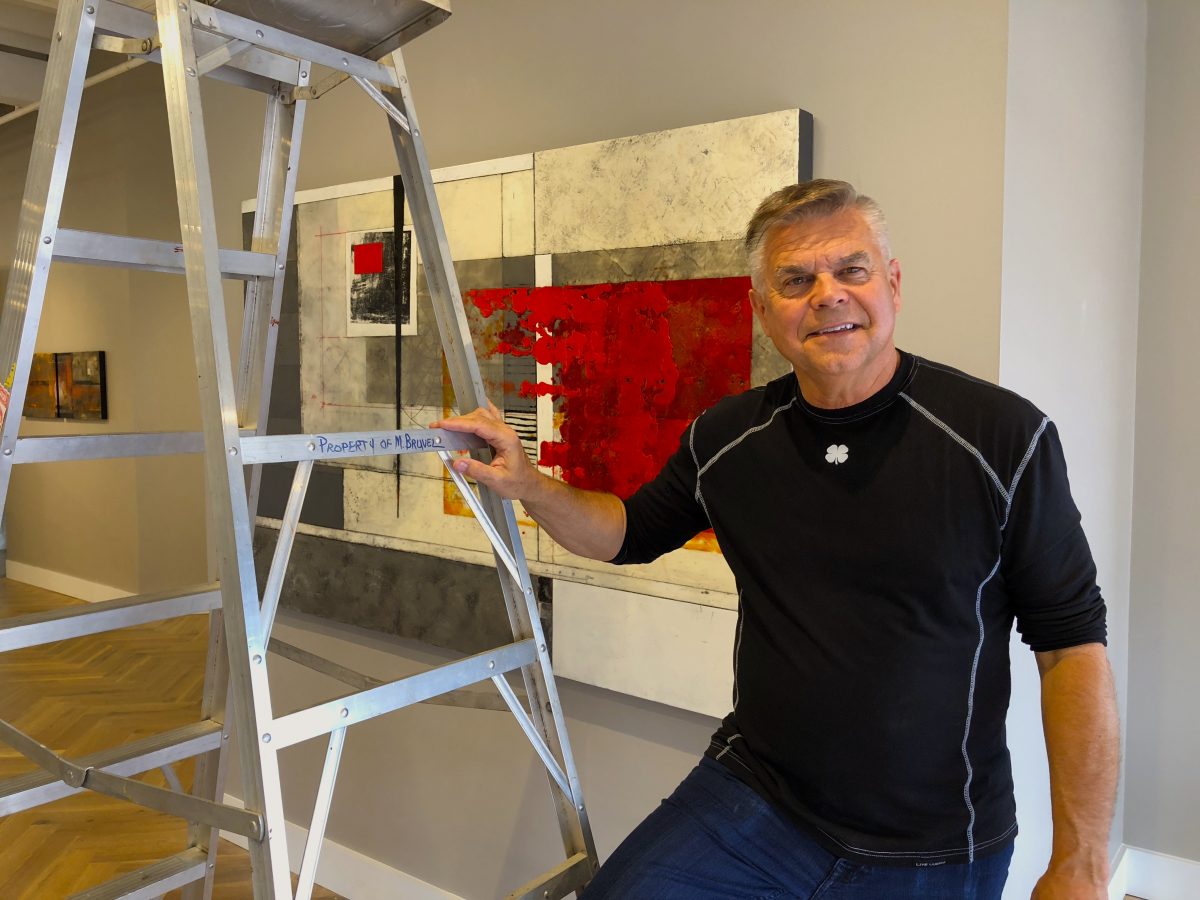 Doug Smith stands in front of one of his large encaustic works.