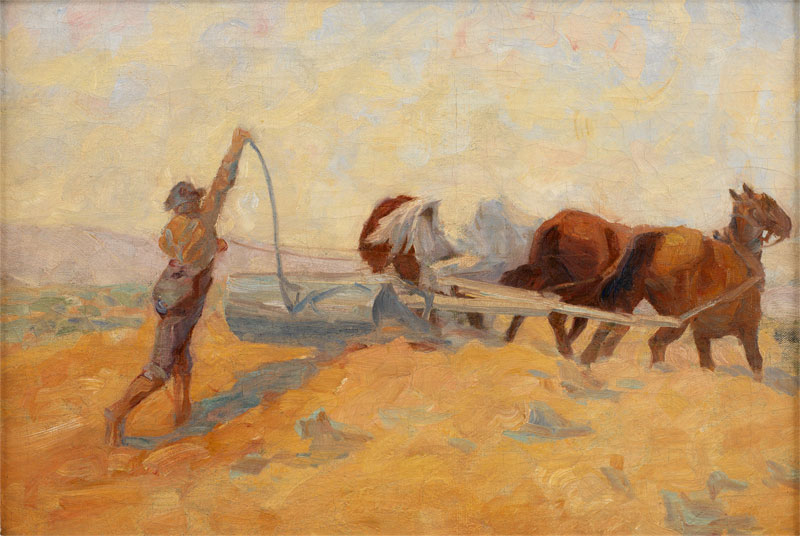 Among the list of highly talented Utah artists who passed on decades before reaching their potential is Donald Beauregard (1884-1914). Born in Fillmore, Utah to Mormon immigrant ranchers, he was an energetic and enthusiastic lover of nature and art. A posthumous reports says that at the age of 12 he ran away from home, walking with an old trapper to and through Yellowstone, sketching and exploring. He left home at 16 and traveled for a year before landing at Brigham Young Academy (BYU) for two years of study. In 1903, Beauregard sought further instruction under Edwin Evans at the University of Utah. Evans, former art missionary to Paris [See 15 Bytes ] and longtime art department chair at the U, recognized the vast talent of the young Beauregard and soon appointed him his assistant in 1904.

Beauregard graduated in 1906 with high honors, not only winning accolades in art but also in oration (talking) and debate (arguing). In fact, during his first year at the U, Beauregard’s oratorical prowess earned him first place in a contest in Lawrence, Kansas. Soon after, he was recognized for his expertise in debate, capturing second place in a competition in St. Louis. 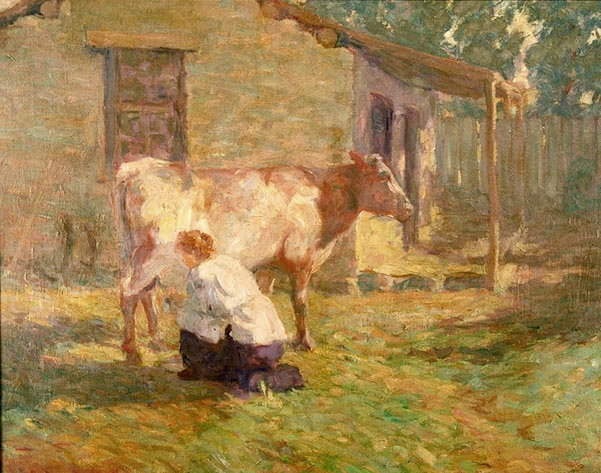 Lack many of his fellow artists Beauregard felt the allure of academic training in Paris, but lack of funds forced Beauregard to take up a laborer’s job for a year after graduation before he was off to Europe. The Academie Julian, set up expressly for foreign students and a favorite of Utah artists, was the destination for Beauregard where he studied under Jean Paul Laurens. During his training at the Julian, Beauregard won a first prize in composition and later, according to James Haseltine in 100 Years of Utah Painting, “ … the Louvre acquired one of his works.” [Page 25].

While in Europe, Beauregard felt the influence of Monet and the Impressionists even though that discipline was not taught in the academies of the time. He returned in the summer of 1908 and the next year accepted a teaching and art supervisor position in the Ogden School District (1909-11). His position afforded him the summers to further his studies, which he did with U of U archaeology professor Byron Cummings. It was during one of these field studies in Arizona and New Mexico that the affable Beauregard met and was befriended by Dr. Edgar L. Hewett. The director of archaeological exhibits for the Pan California Exposition, Hewitt became interested in Beauregard’s talent while the two were documenting early Spanish colonial ruins. This fortuitous trip included the artist’s introduction to an attorney and art patron, Frank Springer who, like Hewitt, was interested in the 25-year old Beauregard’s obvious abilities. Springer later offered his financial support to Beauregard for further study abroad. Beauregard continued his studies in Spain, France, and Germany. It was during this period of study that Beauregard became interested in the works of Gauguin and Cezanne and as Robert Olpin painted out in Artists of Utah (p. 99), “ … the Utahn incorporated cubist feeling and rich color into thrusting and boldly painted expressions.” 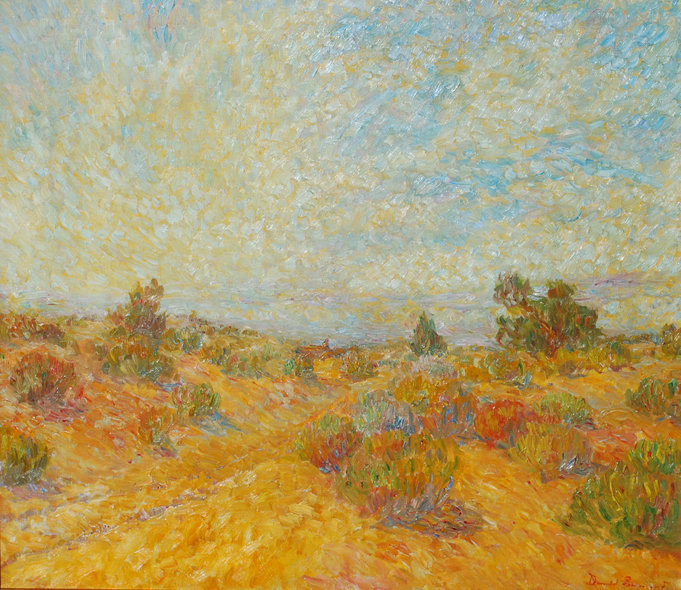 Springer commissioned Beauregard to create six murals for the 1915 San Diego exposition, no doubt at the suggestion of Hewitt. Beauregard was charged with depicting in the six 10 X 12 foot murals the life of St. Francis of Assisi, the patron saint of Santa Fe. Springer again sponsored Beauregard’s trip first to Washington, DC for research, then sent him to Spain for “Old World” perspective. During his labors in Spain, Beauregard became ill and was advised to retreat to Switzerland where it was thought the higher altitude would be a precaution against tuberculosis. A brief trip to Munich provided no better results than had Switzerland. In November of 1913 he sailed home, first landing in New York, then via the train, had a conference with Springer in DC. When he arrived in Santa Fe in February, 1914 [by way of Fillmore for a brief visit with his parents], Beauregard set up shop and vigorously worked on the Assisi murals. He completed one or two of the murals [the record shows in several sources that he completed one; in other references, he was said to have finished two panels and established preliminary designs for the rest by 1913]. Beauregard labored on the project until his pain caused him to collapse. Unable to hold a brush, he was obliged to travel to Denver for a consultation with doctors about the cause of his illness. Subsequent exploratory surgery occurred in March, followed by the prognosis. Beauregard corresponded with Springer about his condition: terminal cancer. The news was devastating for Springer who wrote that with few exceptions “ … nothing has affected me so deeply as Beauregard’s grave letter in which he announced his own death sentence.” [Extract from Frank Springer and New Mexico … by David L Caffey, p. 178-181]. When he had regained a margin of strength, Beauregard traveled home to Fillmore where, just two weeks later, he passed away at age 29. Two other artists completed the Assisi murals which remain in the Santa Fe Art Museum.

Albeit limited by his untimely death, Beauregard’s body of work shows that the young man was an artist’s artist. Beauregard’s delicate “Still Life with Lemon,” a work painted when the artist was only sixteen, demonstrates the range of talent of a promising artist. “Milking Time,” [Utah Arts Council] painted in 1906 while he was a student at the Julian, fully illustrates Beauregard’s command of the academic techniques, reminiscent of the works of Evans, Harwood, Fairbanks, and multiple other Utahns who studied in Paris. His sponsored studies in Paris, like so many others of Utah’s renowned artists, are clearly reflected in works like “Artist’s Father Clearing Sagebrush,” c. 1907  and his “Working from Dawn to Dusk, near Fillmore,” 1908   both at the Springville Museum of Art. Both attest to what Haseltine described as a “muscular art … rare in Utah painting. We have seen it only in Edwin Evans.”

A sad coda: About eight years after Beauregard’s untimely death, his mother, Estella Beauregard, the executor of the artist’s estate, was arraigned on charges of grand larceny. She had removed a total of nine paintings by her son from the Salt Lake Chamber of Commerce, a local furniture store, and from the ZCMI art department. She told an attendant she was removing them to place them in more suitable frames. The theft interrupted a planned exhibit that had been personally arranged by Alice Merrill Horne, the founder of the present day Utah Arts Council. The charges were brought on behalf of a childhood sweetheart of the artist who had loaned the paintings and claimed they were given to her as a gift by the artist. Mrs. Beauregard claimed them for the estate. In December of 1923 she was arraigned for the theft of six of the paintings and was let go on bail (unfortunately we don’t know what happened next; any sleuths willing to take up the trail?) 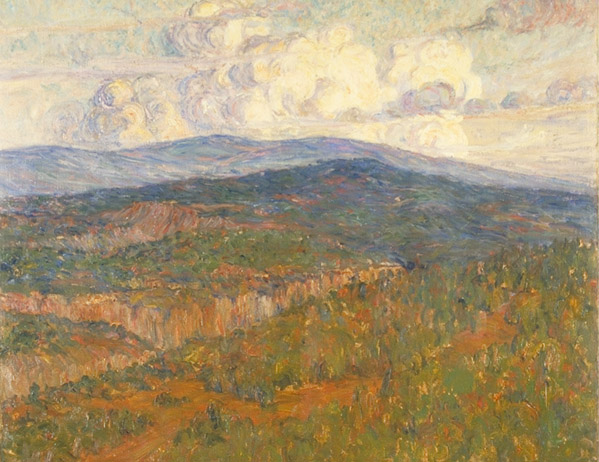 In Horne’s landmark Utah art book, Devotees and Their Shrines, completed shortly after Beauregard’s death, she said of him, “He understands the principle of domination and elimination — that one idea should dominate and all that tends to strengthen that idea may be introduced but detail attracting attention from that idea must be left out [p. 94].”

Dorothy T. Dulle, associated with the Museum of New Mexico observed, “Tragic irony confronts the critic who would evaluate the work of Beauregard — tragic in that a career so full of promise should be so early ended: ironical in that the incredible amount of work he did should have been [largely] preliminary studies in a career which, had it come to fruition, must surely have been an eminent one.” 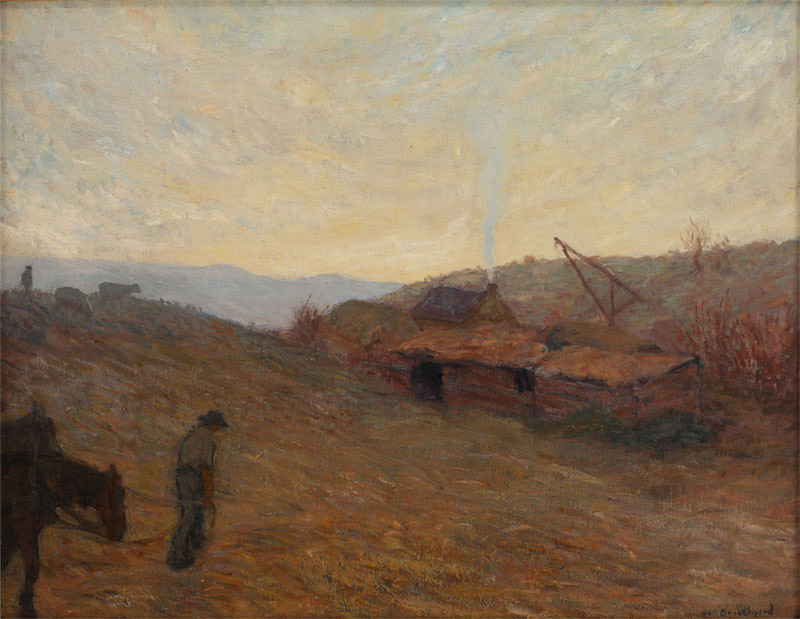 Working from Dawn to Dusk, Near Filmore, by Donald Beauregard, 1908, courtesy Springville Museum of Art

Check our blog this month for further information about Beauregard. Tom Alder wishes to express his thanks to Shawn Rossiter and Shane Thopham for providing research assistance with this article. If you have information about early Utah artists you would like to share in this column please contact us at editor@artistsofutah.org.