Distant Truths Unusually Near: Jacqueline Osherow’s “My Lookalike at the Krishna Temple” 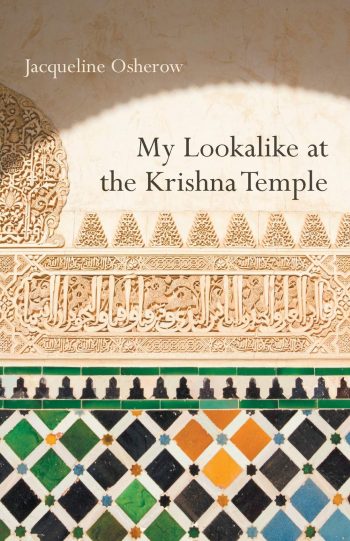 Li-Young Lee, in a recent interview, describes a spiritual practice as “fundamentally orienting, compass-like, pointing the soul toward its primary source,” and that placing any other thing — politics, for instance — at the heart of the matter “must lead eventually to confusion … a form of dis-orientation.”

Consider, then, poet Jacqueline Osherow’s “Moonrise, Salt Lake City,” wherein the speaker makes an appeal to the moon, after mistaking it for an “early Renaissance annunciation”:

Don’t worry, moon; we all lose our bearings.
You don’t have to rise. Stay here instead.
I’ll spot you; we could both use an ally
and rumor has it disorientation
is the least resistant pathway to what’s holy.

In her latest book, My Lookalike at the Krishna Temple, the poet, in her reliable avatar as a restlessly traveling, beauty-thirsting, devotion-seeking song-spinner, takes us through a myriad forms of disorientation, so that we can look with her at the holy and the beautiful. No chance, though, that we’ll do it in any way straightforwardly — that we’ll aim, like the compass needle, directly at the numinous. That seeking knowledge, practicing devotion, making or giving in to beauty, are anything but straightforward is both subject and method of these poems.

The speaker of these poems wants to edge nearer to what illuminates, but also mistrusts both her own tendencies and even, at times, her yearnings. In the gorgeous “Tilia cordata,” the speaker allows the perfume of lindens in June bloom on her street in a desert town, her home, to cast a synesthetic spell:

Just to stay afloat, quickly abandons
any pretense of carrying a scent. Only the lindens

(a whim of early dreamers on my street)
from some inner surge of altruism, conceit

or pure naiveté, choose this instant
to loose, enmasse, their all-consuming scent.

I could spend its all to brief duration
just sitting on my porch, breathing it in.

This heady moment transports the speaker in memory to Darmstadt in Germany, where, three years ago, she considered, then rejected, a visit to the Judisches Museum — “What I needed was another history// or at least a place where mine was less conspicuous.” She finds herself in a city park where lindens are blooming, profuse, saturating the air, “more intense than on my street, the very linden/ that kept me on my porch for hours dreaming.”

It was, she says,

as if the trees themselves were in collusion

to throw me off completely. How could this
thoroughly alien, unnerving place

have anything in common with my home?

The question the poem goes on to take up is nothing less than the moral burden placed upon us by the coexistence of beauty with the great evils of history. How can the poet — how can any of us? — rightly turn our attention to the “earth’s loveliest offerings” when its horrors, historic or otherwise, loom with such menace? The poet insists on self-correction, though: “Surely it can’t be good,” she argues, to insist on “infus[ing]” the linden trees’ blooming “with human beings/at their very basest.”

The give and take of Osherow’s arguments, embodied as they are in narratives of travel and in lyric topoi, is one of her most potent instruments. Her voice is lithe, capable of, in turn, demanding, entreating, singing, and turning as if on a dime to switch between any of these modes. This is nowhere more effectively used than in the title poem, with the speaker imagining the look-alike, invoked by the owner of the restaurant where she gets her kofta and dal: she describes a rapturous sequence of perfect saris the look-alike might wear, each more subtly beautiful than the last —

She also imagines the look-alike as a perfect devotee, who repeats the words of an invocation with unwavering attention, contrasting it with her own wandering mind and focus. In the middle of a moment of self-excoriation, the speaker reconsiders her elaborately embroidered vision of the look-alike’s clothes:

Chances are, she’s pawned her bangles, if she
ever had them, wears the same all-purpose
sari (a hand-me-down from Gopal’s mother),
cotton shawl, hemp sandals, every day.

The doubling and tripling back to posit, then critique, her own tentative claims reads as an honest set of obsessions, and it’s disarming, but it’s also cover for a rigorous investigation: the speaker tells us her own practice — on “any given/Shabbat morning,” she tells jokes in the back of the synagogue, and deems herself a “fraud, a hypocrite, a foul-weather/believer,” but even given this, she declares herself unwavering in “devotion to those words,/the more incomprehensible, the better.”

She’s talking about the recitation of the words of the Torah, the words of God himself speaking to Moses, naming “His unnamed Name.” The accomplishment of this poem, in its braiding of the speaker’s confession, the summoning up of her Hindu double, and the dilemma, the simultaneous necessity and impossibility of ritual devotion, arrives in a gorgeous peroration: the speaker imagines, one more time, the look-alike, opening an ornate box to find a sari made of something perilously close to ineffable materials, one that the speaker urges the look-alike to put on: “Krishna’s awaiting you./ And I won’t lie, look-alike, I’m waiting too.” As if the speaker, in imagining herself as devotee in the Krishna temple, awaiting an audience with the God, attends upon her own consecrated self, once removed.

What makes devotion, as practiced and articulated in these poems, beguiling is that it is both human-scaled and potent with the promise of astonishment. In “Fez Postcard/Call to Prayer,” the speaker conjures the vivid, multisensory medina, its scents and colors, textures and sounds, opened into prayer, as “every vista turns devotional:” the prayer mats people carry with them, unrolling them for prayer, are evidence that “sanctity is portable,” each mat “a small/ but resolutely holy house of prayer.” Like the prayer that punctuates the day, the poems in this book create an

atmosphere
never without at least a telltale

smattering of freshly distilled attar
of the unabashedly eternal

as if a vial were always running over
ready to anoint each head with oil.

The book’s riches are almost overwhelming: the heartbreaking elegy “Backyard Meteor,” the villanelles (one of which appeared first in 15 Bytes) and a ghazal, and the sonnets, the dexterous informality of which are a magic trick Osherow can perform seemingly at will, their deftness only pretending to be casual.

The poems in the last section of the book take as their sacred location the Alhambra, palace and fortress of the Moorish monarchs of Granada, Spain, which allows for a sustained consideration of order and the systems cultures devise to describe and enforce it; the terrible, bloody course of human history at this crossroads of Islamic and European-Christian cultures, as well as the launching point for Columbus’s voyages to the Americas and all that followed; and, more generally, the expulsion — and worse — of the Jews; and the stories to which one might have recourse to imagine something better: the myth of “that golden interim/ of Muslim-Jewish serendipity/even if it has been exposed as sham”:

If history founders, I’ll escape to myth;
if myth collapses, I’ll pair up each word
transfiguring each chiseled wall with faith

to one my own shepherds overheard;
and if that proves hopeless, there’s still architecture,
its prophecies directly overhead.

Art, beauty, faith, myth, history: each gets its say in this beautiful, searching book, but the speaker is, finally, after something even rarer — a music that might take its origin from a harmony of the spheres:

I, for one, believe it’s there,
that my seventeen symmetries of length and breadth

are part of it—their song that pure —
that they’ve just stopped a while to catch their breath.
Soon, they’ll be singing in my ear.

The reader of this book is very lucky, to stand so close to one whose ear is so finely tuned. 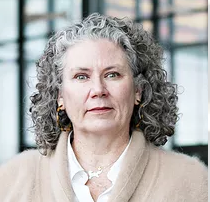 Born in Dover, Delaware, Lisa Bickmore grew up living all over the United States and in Japan. She is the author of three books of poems: Haste (Signature Books, 1994), flicker, which won the 2014Antivenom Prize from Elixir Press, and Ephemerist (Red Mountain Press, June 2017). She earned a B.A. and an M.A. from Brigham Young University. Currently, she is a Professor of English at Salt Lake Community College, where she was the recipient of the SLCC Foundation Teaching Excellence Award in 2006. She teaches writing of all sorts, as well as publication studies, and is one of the founders of the SLCC Publication Center.