DEXO Explores Utah’s Queer and Mormon Past and Present 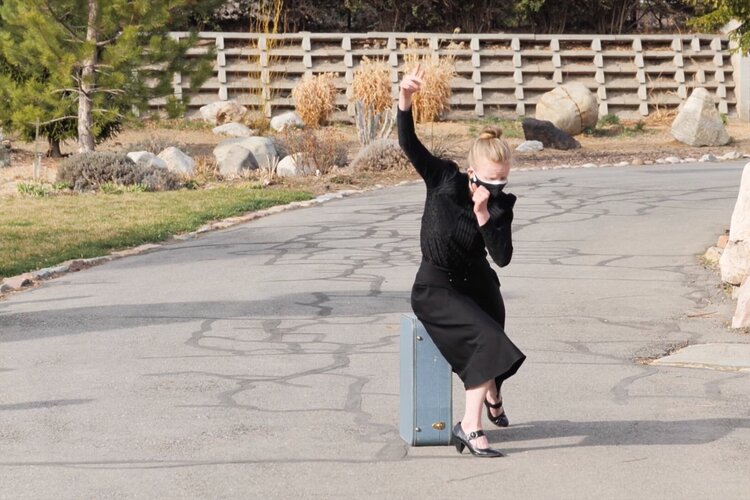 One Hundred Years Hence
was a production of Deseret Experimental Opera (DEXO, currently helmed by Peter C. Larsen and Carly Schaub), with a libretto by Max Barnewitz. The opera follows the lives of M, living in the present day in the Marmalade neighborhood of Salt Lake City, and Elsie Pierath, a blind woman who inhabited the same house at the turn of the 20th century. It draws a simple and earnest sketch of their complex lives and the many tangled threads that knit the two together. We watch the performance, directed and choreographed by Alexandra Barbier, play out in the setting of Gilgal Garden, a sculpture park built over two decades by one LDS bishop beginning in 1945, two years after the death of the real Elsie. The scriptural, poetic, and philosophical themes of the many large sculptures and engraved stones of that personal-crusade-turned-municipal-park lend another layer to the stories of M, a queer person rediscovering her footing in Utah after years away, and Elsie, converted by missionaries in Copenhagen and navigating a new and strange country in 1903.

Emma Sargent as Elsie Pierath began the performance with a long slow walk down the garden’s entrance path, cane and suitcase in hand. She comes to rest next to the scene of M’s arrival at the Marmalade home of her new landlady Dorothy, who pours cups of tea and does a billowing dance with pink-clay bedsheets. The action of the show is both narrated and accompanied by the music/vocals of composer Nora Price, all pre-recorded and played over the dancers’ movement through speakers set up in the park. Elsie’s voice specifically is represented by opera singer Rachel Grider who, like her character, is blind. The voices of Price and Grider tangle over the shimmering, hazy luster of Price’s guitar. They are a beautiful complement to each other. Grider’s voice rings like a clear glass, Price’s swirls inside and around it as they thread both their voice and instruments through pedals and microphone effects in a recording process that dreamily echos, obfuscates, and gathers subtle ambient sound. Lyrics contemplate change and stasis, otherness and out-of-place-ness, and anxiety or comfort in these conditions.

The movement of Elsie is deliberate, controlled, and more anchored in place compared to that of M (Atticus J Reo), Dorothy (Rachel Luebbert) and M’s friend Jess (Craig Mitchell), who move freely and with animated enthusiasm. (A note is included that, historically, Elsie likely wouldn’t have had access to a cane or autonomous mobility; she would have relied on others to get around. The change was made to help the performance adhere to CDC guidelines, and none of the other dancers are partnered either. All wear masks throughout.) This stylistic tension is used to greatest effect in an interaction between Elsie and M, who has found the old suitcase and begins rifling through it. The knitting supplies inside are tokens of Elsie’s status as a prize-winning lacemaker, and she slowly twists herself into one end of a spool of thread, letting it bind and constrict and dig into her. When M finds the same spool, she exhilarates in it, nuzzling and playing with it and squirming her way into a snarled knot to which Elsie is very quietly still attached on the other end.

The middle phase of the performance delves further into themes of knitting and expands to touch on migratory birds, ancestral connections, and ecological peril in the Great Salt Lake. M and Jess perform an exuberant, sweeping dance and are joined by Dorothy. Barbier, who plays Elsie’s missionary sponsor Anders, joins to help them send dozens of brightly colored balls of yarn spinning and unraveling in a haphazard criss-crossing pattern, into the center of which Elsie becomes yoked. Upon arrival, each audience member had been given a long piece of yarn of unknown purpose as our “ticket,” and at this point a pause is drawn in the story and we are invited to pull out our ticket and follow a demonstration on the technique of “finger-knitting.” I screw mine up horribly and give up quicker than most. Emma Sargent is particularly good and has done a whole potholder in a matter of seconds. The cast unravels their knitting and we dissolve back into the story.

This middle act takes place in the grass at the center of the park in front of a large stone altar, the first act having occurred in the west half of the park and along the entrance path, and the third scene moves to the east half of the park through an archway of boulders. It’s a very tiny park though, and it only takes the audience a few steps to complete this traverse and enact a small migration of our own. Outside of this subtle directional movement in the specific and unique chosen setting of the garden, and the finger-knitting lesson, our role as audience remained that of regular performance attendee, observer and outsider. We were expected to be quietly watchful and attentive and there was delineated performance space, but no designated seating and we were free to choose our vantage point as we liked (beyond a request for social distancing). Gentler interpretations of “immersive” like this are the ones I often prefer. I like an element of optional(!!) participation and the opportunity to slip into the water a bit, as it were, but the term is omnipresent and generally used with incredible vagueness. You could find yourself at a very formal site-specific performance, or at a compulsory-theater-games fun-house style experience (aka a nightmare if you’re me, which you’re not, so maybe that end of the spectrum appeals to you!), or anywhere in between when a production is advertised as such. There are exceptions of course, but I tend to feel interaction as an offering over a mandate is a nice choice.

The third and final scene finds Elsie alone, Anders having moved away, and M, Jess, and Dorothy together, contemplating community and belonging in an expanding sense of queerness and ex-mormon identity in Utah. Elsie recalls the earlier dance of Dorothy when she steps starfish-like into the elastic of a fitted sheet and begins a final waltzing kind of dance with it. Alone, but not totally alone. The show’s final note was wholesome, and the few moments of casual chatting as we dispersed as sweetly precious and hopeful as the spring weather. The Saturday afternoon showing was performed in the rain, a very different experience and I heard, delightful in its own way. The final performance was unfortunately canceled. It was however, filmed, and will soon be released as a virtual performance through DEXO.

Disclaimer(s): This was the first in-person performance I’ve seen in over a year. Not *that* remarkable at this point, we’ve all been in this same boat for a long time now. But, for transparency – because of that, and because it was a beautiful day, the last day of this longest winter, and because several dear friends were involved in the show’s production – as long as I felt safe there was no earthly way my experience of it could have felt like anything other than a gentle thawing of the heart.

I’d like to note that I did feel reasonably safe attending this outdoor in-person event, although my comfort level may not be yours and frankly, I might not have gone if I hadn’t had the enormous privilege to be recently vaccinated. Respect practiced by all for masking and distancing standards, and the care taken to ensure tickets and programs were distributed in a no-contact way were greatly appreciated and made it possible to enjoy the performance.

[Editor’s note: You can watch the full performance above, and, if you feel so moved, you can donate here.]