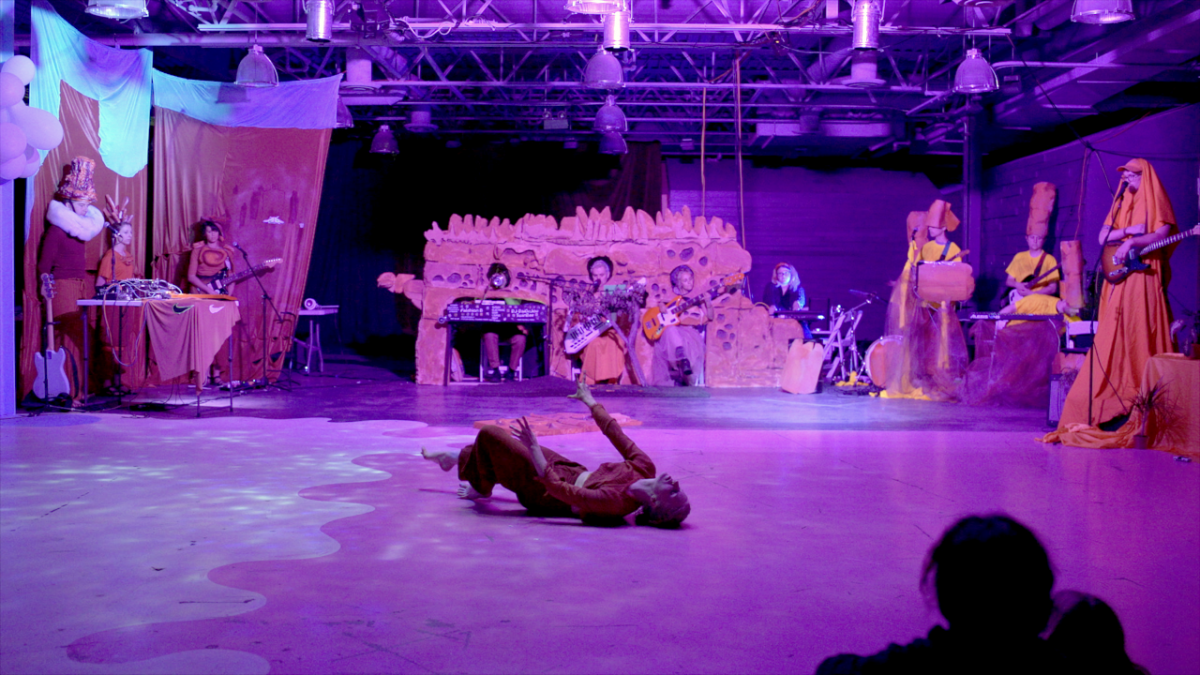 Last weekend, Deseret Experimental Opera staged “Life Relegated,” a rock opera written by Jacob Rosenzweig and realized with a community of local musicians and dancers. The location was an out-of-the-way address inside The Gateway — the old Urban Outfitters, now a vast cement hall. It was filled for the evening with political banners and tri-fold displays, a hybrid of aesthetics familiar from community organizing, community theater, and DIY music venues. A small stage sat adjacent a large curtain from which dancer Emma Wilson read an introduction, including the necessary and conceptually fundamental acknowledgment that the show would take place on, and take as its subject, land of which native people were and are dispossessed. The long list of tribes from whom the land was taken was meticulously rattled off to the crowd, after which folk-punk duo fists in the wind, disguised as a “welcome wagon,” sang a prologue promising us we’d hear from the landscape itself. Wilson took the stage a second time to invite the audience beyond the curtain and to offer any assistance necessary in finding accommodating seating.

Going to lengths to describe the look and feel of the anteroom, prologue, introduction, and procedural scripts seems valuable because they demonstrate themes that ran throughout the production:

— Community, the polyphonic auteur who speaks with, to, and against herself in exuberant and chaotic clarity.

— Limited access to resources, but abundant energy to transform and realize with the resources at hand.

— “This is awesome/They’re gonna love this” — a production by a community for their extended community, which creates a feeling that decisions were made with the good-faith of the audience as a given: a production that offers accommodation and puts on no airs.

— A DIY ethos which allows foam to be foam and cardboard to be recognized as such, while somehow transmuting it entirely. 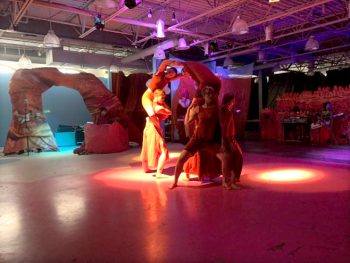 After the prologue, the curtain opened to a room much more transformed than the first. Purple lights were trained on an overwhelmingly orange set representing five national parks located in Utah, set aglow like a haunted mansion. We made our way to our seats in full knowledge that we had “entered” the show. It had absorbed us already.

Musicians from five local bands  —Durian Durian, Wallfly, 8euat1ful5, Millennial Homeowners and It Foot, It Ears — took their places inside the set, which they wore as a costume in ingenious and delightful ways. Each park differed from the others in the manner in which the musicians wore their “park bodies.” In one, multiple bodies become one geological feature, two faces built into the same arch or three into the same cliff. In Capitol Reef, faces emerged from holes in a foam facsimile of the park, while other holes allowed hands to poke through and play a keyboard or a bass. Another park was represented with drapery attached to baseball hats that cascaded over the platform, binding the musicians to the ground and turning them into hoodoos and pillars of rock with guitars in hand. For another, musicians wore their geological features as haute couture, pinning elaborate fascinators boasting needles, clouds, and swirls to their heads in rakish angles as they represented the districts of Canyonlands. The ebullient excess of the set, coupled with the risible simplicity and brute legibility of the materials, was an absolute victory. It was beyond campy and it was brilliant.

The show itself is an extended lament by five personified parks who are told by a sock puppet, dubbed “The Invisible Hand of the Free Market,” that they are dead weight, their funding is cut, and they’ll need to figure out how to monetize or perish. Each park floats solutions in song. 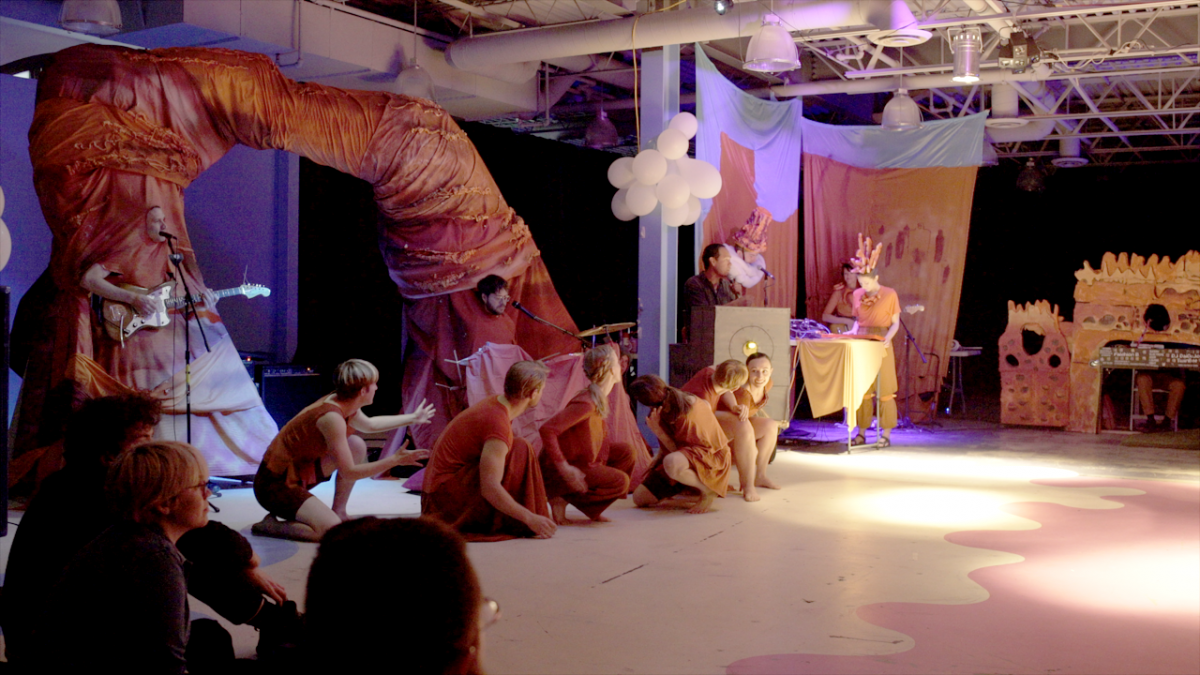 It Foot, It Ears performs as Arches National Park

Arches (It Foot, It Ears) hatches a plan to sell plastic replicas to every buyer hungry for kitsch keepsake after grumbling that it has represented the state for free for too long, belting:

I’ve been the face of a

For peanuts – I mean, please!

I’m even on the currency

A quarter of my royalties

And I could be retiring

Cheddar made from Swiss cheese —

Who wants a piece of me?

Canyonlands (Durian Durian) makes a bargain to update its petroglyphs to the logos of corporate sponsors, and sings a heart-rending requiem in which the lyric “Kokopelli wearing creamy Nikeeeeezz” is somehow made sorrowful.

Zion (Millennial Homeowners), itself a promised land, wonders about finding a promised land of its own and plays out an accelerationist Muskian fantasy in which the entire park colonizes redrock mecca, Mars. The Hand graciously thanks Zion for opening new territory for the free market.

Capitol Reef (8eaut1ful5) is informed its looks are to blame for its less-than-optimal brand recognition when compared to Zion or Arches. A dirge follows in which Capitol Reef begs for plastic surgery, singing, “A hundred miles of my fault, big-ass slabs of drab.”

Bryce Canyon (Wallfly) is eroding and can’t afford health insurance because 10 to 20 million years of erosion is determined to be a pre-existing condition.

All the while, a throng of dancers express the music by writhing in tawdry emotionality. The dance becomes the manifest pathos and carries elements of narrative, enacting decay, antagonisms and forces of tension and conflict.

In true operatic fashion, the lyrics were projected for the audience to read, which allowed the wit, pun, and parry of Rosenzweig’s writing to land.

The audience is forced to feel the absurdity of putting the landscape through the familiar, everyday tortures of capitalism. By extension, the torturous dehumanizing effects of the free market become absurd on a human scale: Why accept a profit-driven health care system? Why allow corporate sponsors to shape our built (and natural) environments? Why internalize beauty standards as personal failings? Why sing for our supper?

We are also reminded that the systems which govern social life are in no way separate from the ones that govern “wilderness.” The show makes the point that our economic system affects the entire global ecosystem, whether we conceptually designate them “parks” or not. There is no “untouched wilderness” in global capitalism, and the laments of the parks are designed to tell us how very touched they are. 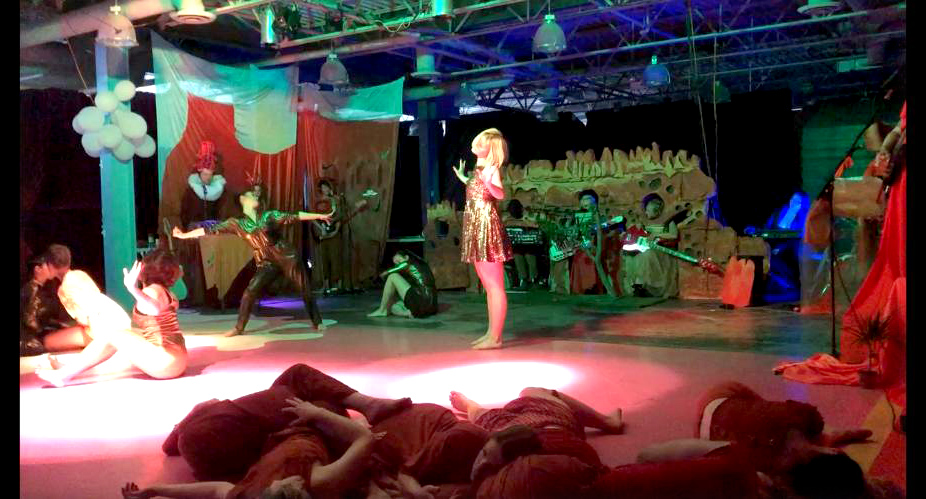