“Day One” at the Warehouse: Young choreographers explore aggression in pop-up event 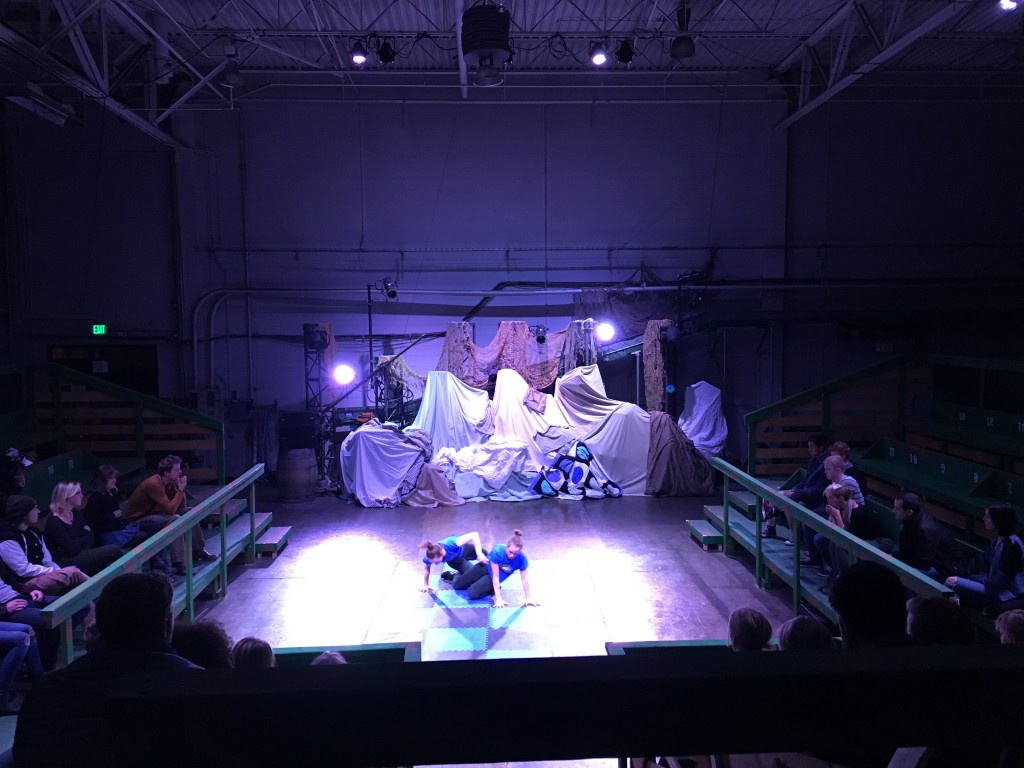 “Day One” showcases choreographic transitions for Breeanne Saxton & Eliza Tappan, two recent graduates from the University of Utah. The self-presenting duo is finding their way in an artistic landscape distinctly different from the infrastructure of a public university. Working in a converted warehouse on Brooklyn Avenue, they make clear any new paths will be on their own terms.

Before the show, a program articulates aims to physically research partnerships and trauma. The idea of sensing your way through a topic is certainly not new but it can be challenging in its presupposition that an audience cares not only about your performance but also about your feelings. I frequently find this brand of dance disappointing; for dancers, moving through a difficult moment often feels right but risks leaving visual forms under-explored. In this regard, “Day One” proves at times to be both the exception and the rule.

Sitting in kelly green bleachers reminiscent of a state fair, the audience surrounds the duo as they assemble interlocking foam pads. The mats, combined with matching Parkside Panthers t-shirts and wrestling shoes, offer an indication of what follows. The pair rhythmically warms their bodies in the concrete space while developing hyper-aggressive personae. Petite gestures like handshakes eventually develop into intense and escalating partnering.

Both dancers maintain fierce commitment to each encounter, never giving an impression that they are performing wrestling. They are wrestling, with the cusp of legitimate injury inching closer with each pass. Two children in the audience laughed from start to finish because it’s severe enough to become cartoon-like, a dancing equivalent of characters dropping anvils onto one another’s heads. This isn’t to say it’s brute violence: buried within the hostility there is an underlying sense of support, that this is actually good for one partner or another. If that’s troubling, it’s also true. When Breeanne kicks Eliza’s legs at one point, it seems awful, but for a dancer it is actually an exercise that gives relief to an aching body.

The associated emotional landscape is incidentally one that I am interested in. Unlike a persistent trope of heteronormative dance partnering which echoes domestic violence, “Day One” engages with a much more realistic, if less narrative, depiction of female friendships. Task-based posturing effectively bridges feelings of being hopelessly overwhelmed with a way to be in space.

There are a few times that it appears the show will end and that cruelty has subsided. The dance doesn’t end at these times but occasionally the pair tries something new, resuming a handshake or running up and down the steps. As they repeatedly break through the surface tension there emerges the possibility to reveal new, admittedly formal, moving ideas. But at the true end it’s as if they are afraid to begin to dance.

This review is published in collaboration with loveDANCEmore .

The Warehouse Theater was donated by Sackerson, a theater group performing Bride of Frankenstein through Halloween. The set photographed is from that production and more info can be found here.