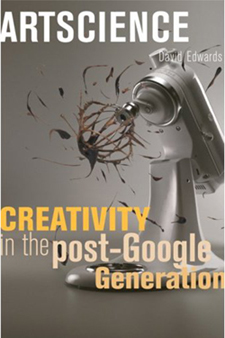 . I am totally in agreement with  its premise that artists and scientists can benefit by immersing themselves in the other’s discipline. The author David Edwards, a biomedical engineering professor at Harvard, is obviously excited by the idea, to the point of giddiness. The book indeed is a giddy collection of anecdotes recounting the experiences of various artists and scientists who have done just that.

Edwards tries to make it clear that the process he is talking about is different from artists who “borrow from science as your neighbor might borrow a tool.” He characterizes the process he is interested in as “idea translation.” The multi-step process the book describes has much in common with what all artists and scientists go through in creating their work; the exception being that artscience idea translators “study deeply and open themselves to invigorating new experience in science (if trained in the arts) or the arts (if trained in the sciences).”  Edwards talks about idea translation between areas of culture, industry, and academia. The central concept seems to be that an idea may arise in one sector, but needs to be “translated” in order to be implemented in another area. A common example of this is when an academic does some research which then needs to be translated to industry to become a product which may then in turn be translated into the cultural sector as it exerts a certain impact on society.

The most compelling cited example of this is Diana Dabby,  a concert pianist who became an electrical engineer because she noticed, in the early 1980’s, that articles about new trends in music were being written by electrical engineers rather than musicians. Although the use of fractals in music is now almost commonplace (see, for instance, FractMus, a freeware fractal music composer) her thesis “Musical Variations from a Chaotic Mapping” was definitely cutting edge in 1995.  You can see Dabby discuss her work in a video available here. She is the last presenter in the sequence; the music and process are intriguing.

One gets the idea, from the way they are introduced, that Edwards has used examples of artists and scientists with whom he was already familiar, and perhaps for this reason (he knew more scientists than artists), the quality of work produced by Edwards’ group of artscientists seems uneven. Having not yet achieved the state of being “post Google,” I used that search engine to view the work of a number of the people Edwards discusses.

Sean Palfrey is a doctor who also photographs. Dr. Palfrey has obviously gone farther with photography than many physicians, having traveled over most of the world in pursuit of images. The book describes Dr. Palfrey’s discovery of double exposures as somewhat of an epiphany. “The synthesis of multiple exposures would become, even if he did not think of it this way, a metaphor for the synthesis of the two lives he had lived since he had started medical school . . .”  Of course, many people make double exposures, and you don’t have to be a doctor to learn how. The examples on Dr. Palfrey’s website seem on the whole rather ordinary.

Julio Ottino is a chemical engineer who was also, earlier, an artist. Edwards says that Ottino credits his experience with observing the mixing of paint with helping him to develop his mathematical ideas about mixing of viscous fluids. I was not able to find any example of Ottino’s artwork on the internet; his interest now seems to focus on research in fluid mechanics and he does not mention art on his web page or in his extensive resume.

Eric Heller, a member of the Physics and Chemistry faculties of Harvard University, produces prints based on computer simulations of various phenomena which  he is researching. Although certain manipulations are made to the images in Photoshop, and colors are decided by the “artscientist,” the underlying forms that make up the images are determined by the phenomena being simulated. Some of the resulting images are more interesting than others. Overall, they most closely resemble the sort of images you will find by Googling (we are still not yet post-) “fractal art.” It’s one thing, however, to produce interesting patterns that seem “artistic” and another to use a scientific process to engage aesthetic ideas in such a way as to produce art which stands up in the larger context of contemporary art.

In science, there are referees who decide whether a paper is worthy of publication; in art, we have curators who perform a similar function. Edwards shows us first class scientists whose work is recognized by being included in peer review journals and who have had, at some point in their life, at least some involvement with art. We are not shown any visual artists of similar stature. There is Scientific American, but no Art in America; Nature, but no Artforum. Edwards mentions in passing (without stating the title) Damien Hirst’s The Physical Impossibility of Death in the Mind of Someone Living, but then, almost dismissively, places it outside the process he is considering by saying, “This is perhaps effective artscience, but Hirst did not need to study biology or think the way a biologist might about life and what it means to be alive in order to create his installation.” So, Edwards seems to be more interested in his concept of idea translation than in artscience.

The concepts of artscience and idea translation are really confounded together in Edward’s book. It is, though, possible to have one without the other. Edwards cites several examples of artscience without idea translation. Anyone familiar with Christo’s work knows of the difficulties of translating an idea from the artistic to the cultural/social sector even with no science involved. And, no doubt examples of idea translation from, say, the academic to the industrial or cultural sectors could be found which did not involve art or science. Perhaps, since the realms of art and science are seen by many as so separate, idea translation involving those sectors is particularly difficult.  The whole subject is certainly worthy of study and comment, but Edwards’ ideas on the relationship of art and science seem somewhat fuzzy at this point.

Edwards has started a center in Paris dedicated to the facilitation of artscience idea translation called Le Laboratoire. Perhaps through the work which emerges from that venue, we will see a sharper vision and projects which are first rate in both artistic and scientific content and accomplishment.