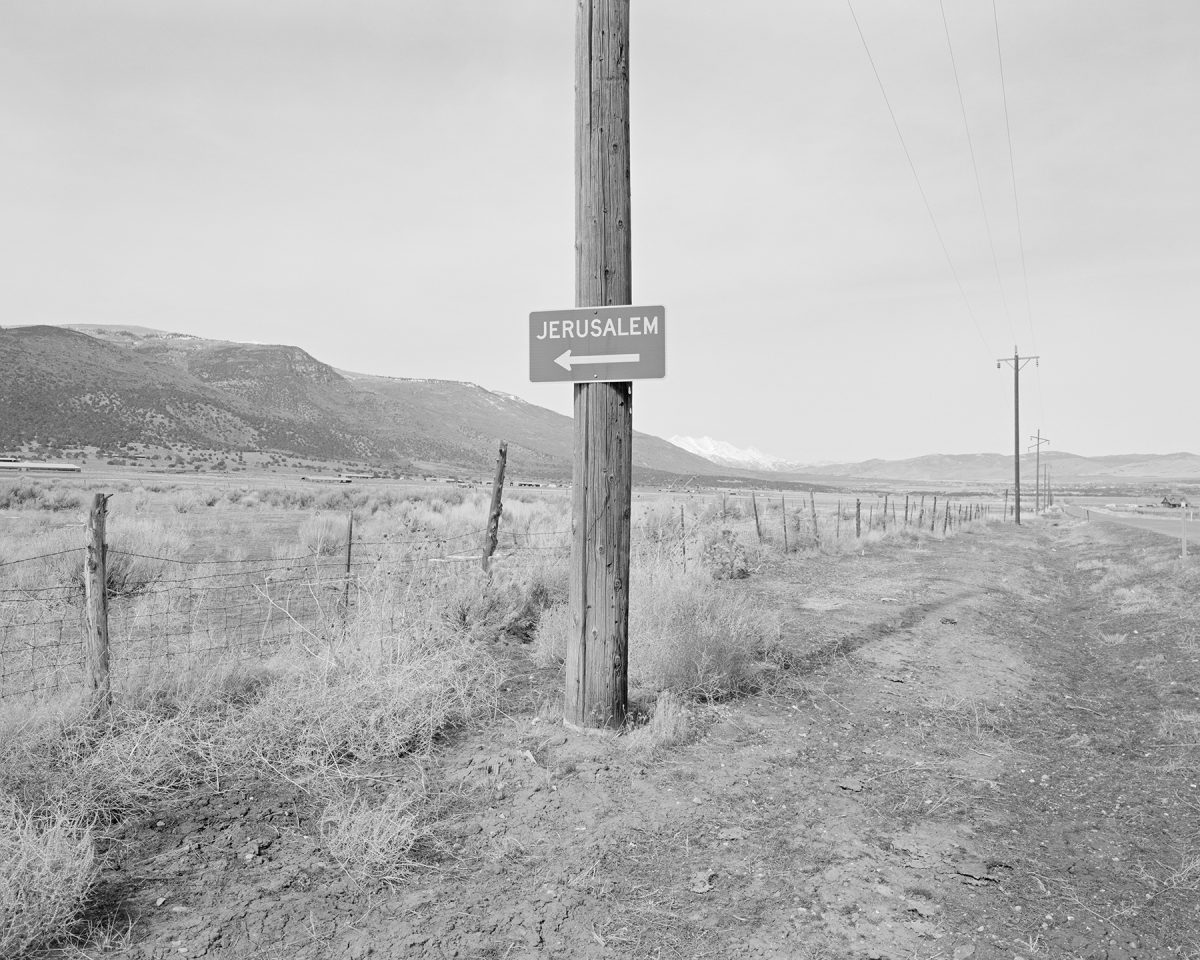 As Europeans moved west across North America they littered their maps with place names. Many of these were inspired by the people who already occupied those locales; a fair share were transplanted from the “old world;” and others grew out of narcissism and boosterism. When Mormon settlers arrived in the Rocky Mountains, they employed all of these strategies — Panguitch, for instance, is Paiute for “abundant fish;”  Leeds and Leamington are both towns in England; Heber, Woodruff and Brigham City were all named for early leaders of The Church of Jesus Christ of Latter-day Saints; and Sanpete County is home to a Mt. Pleasant, a Fairview and a Fountain Green. But the Utah map is also endowed with a significant number of scriptural monikers, some of which will be familiar to readers of the Bible while others are unique to the Book of Mormon. These are at the heart of Daniel George’s God to Go West exhibit, currently at Brigham Young University’s Harold B. Lee Library.

George is a professor of art at BYU who received his MFA from the Savannah College of Art and Design and his BFA from BYU-Idaho. For this exhibition, he has photographed a score of locations in Utah that bear scriptural names given to them by early Mormon settlers. Few of these black-and-white photographs are striking, the range of grays eschewing any sense of black so that shadows and highlights disappear or become negligible (George’s is definitely not Ansel Adams’ high-contrast vision of the West). Benefit of the doubt suggests this is not due to a lack of skill but to a purposeful strategy — a desire to emphasize the semantic rather than the aesthetic nature of George’s project. “Names,” the artist says about his interest in capturing these Utah places crowned with scriptural references, “have the ability to mediate qualities and meaning attached to a place, and are a vital part of individual and collective memory and identity.” 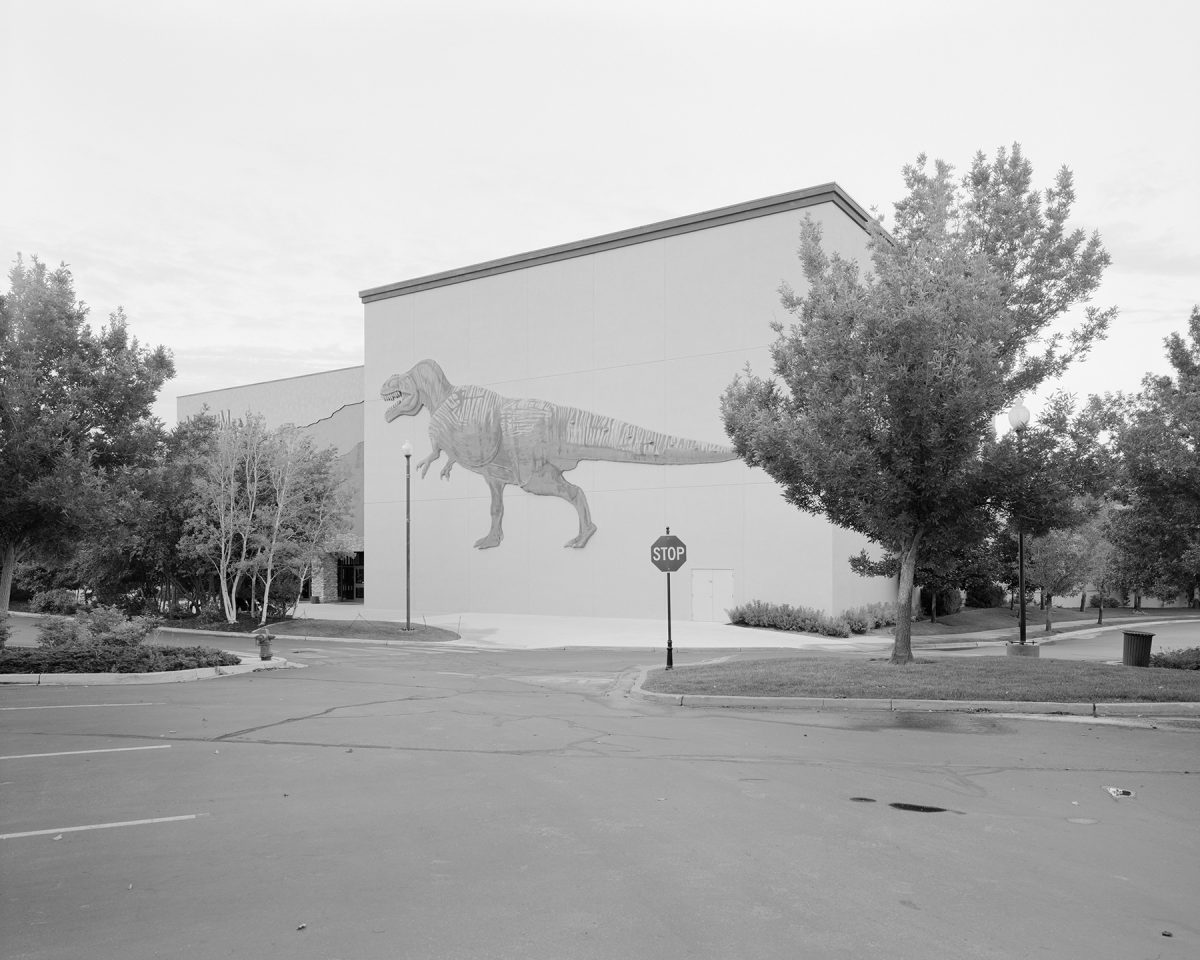 Steeped in scripture and fleeing civil turmoil in their former homes, the people who traveled west with Brigham Young came to think of their new home — which they originally called Deseret, a term from the Book of Mormon — as a new promised land, themselves as a new Israel. So, when on arrival they found a smaller, freshwater lake connected to a larger saltwater one, paralleling the geography of Palestine, it seemed appropriate to call the river that joined them “Jordan.”  George says of this branding process, “it is evident that their intention was to create a sort of utopia by association.”

A straightforward interpretation of George’s body of work would be to see each image as an individual example of the contrast George sees between the romantic ideal that defined the settlement and naming of these places— what he calls “idyllic optimism” — and the “unavoidable incongruity” that happens in reality. Take, for instance, the image of a simple road sign that reads “Jerusalem,” accompanied by a directional arrow, nailed to a telephone pole on a rural road.  The original Jerusalem was the ancient city of David and Solomon, center of the Holy Land and setting for important events in the Gospels — a land of promise and importance. Its Utah counterpart is practically nonexistent: there is little sign of life in George’s photograph; a Facebook page for the location exists, though it is empty of content; and MapQuest and Google Maps identify it as a spot without roads in the hills between the Sanpete farming communities of Fountain Green, Wales and Moroni. It is a digital and physical ghost town.

Fortunately, many of the works open themselves up to additional semantic readings, that may range from the grounded to the playful, depending on how far outside the picture frame one is willing to go for reference. 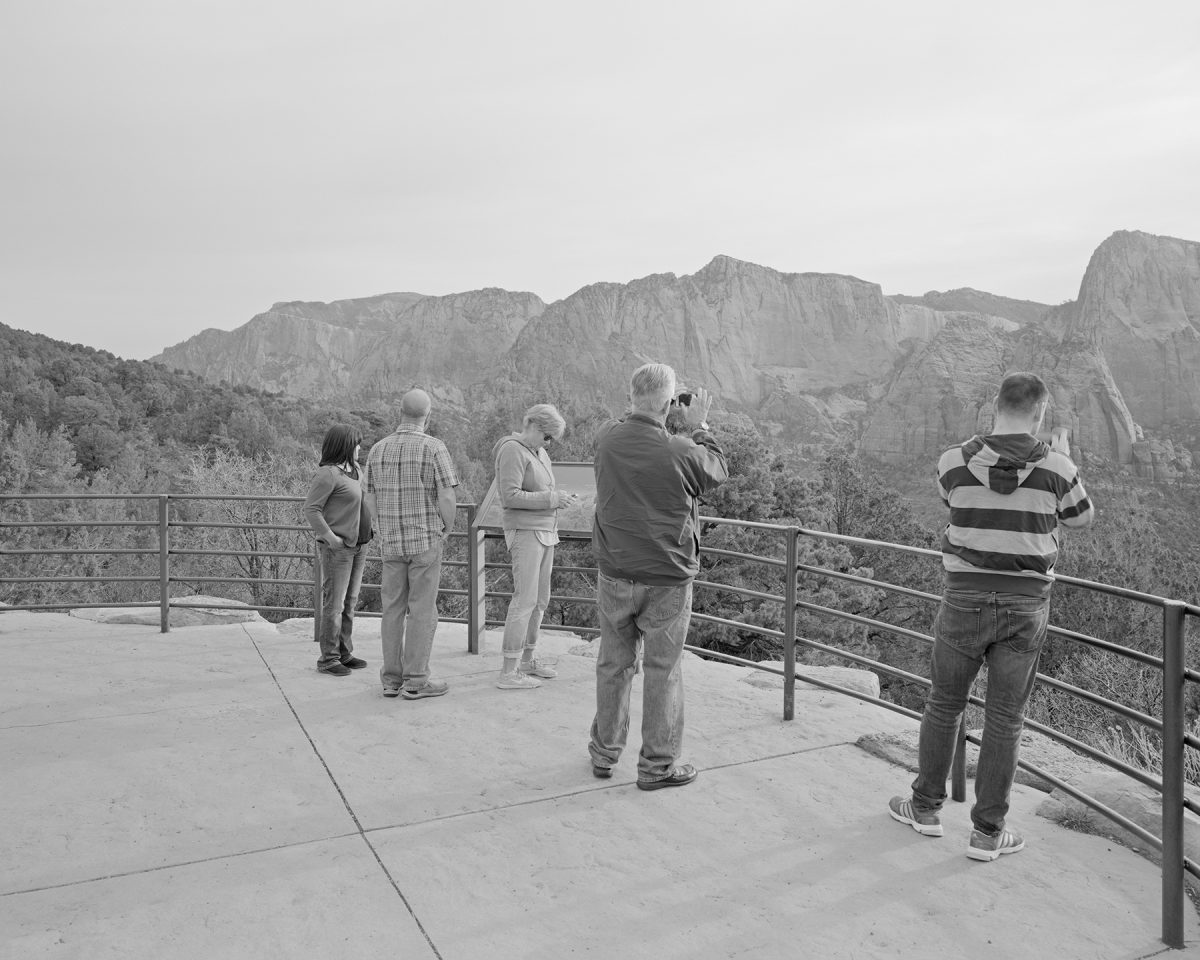 Intentional or not, George’s series is leavened with dashes of wit. Kolob Canyon, in the southwest of the state, gets its name from LDS scripture, where “Kolob” is identified majestically as the “star nearest the throne of God.” George’s image of the place centers on the tourists visiting the canyon on the north end of Zion National Park, most of them concentrating on their cameras and phones more than on the landscape. Imagine, if you will, Instagram posts in the afterlife featuring selfies taken “before the throne of God.” For us, “Moab” may mean mountain biking, river rafting and rock climbing, but in the Old Testament it’s the name of the incestuous offspring of Lot and one of his daughters (more than one resident of Moab, Utah tried to have the name changed because of this); it’s also the place east of the Jordan River where Moses is forced to camp (and where he dies), forbidden from entering the Promised Land. George’s cheeky image shows a small building facing a pool with “Camp” blazoned across its roof. 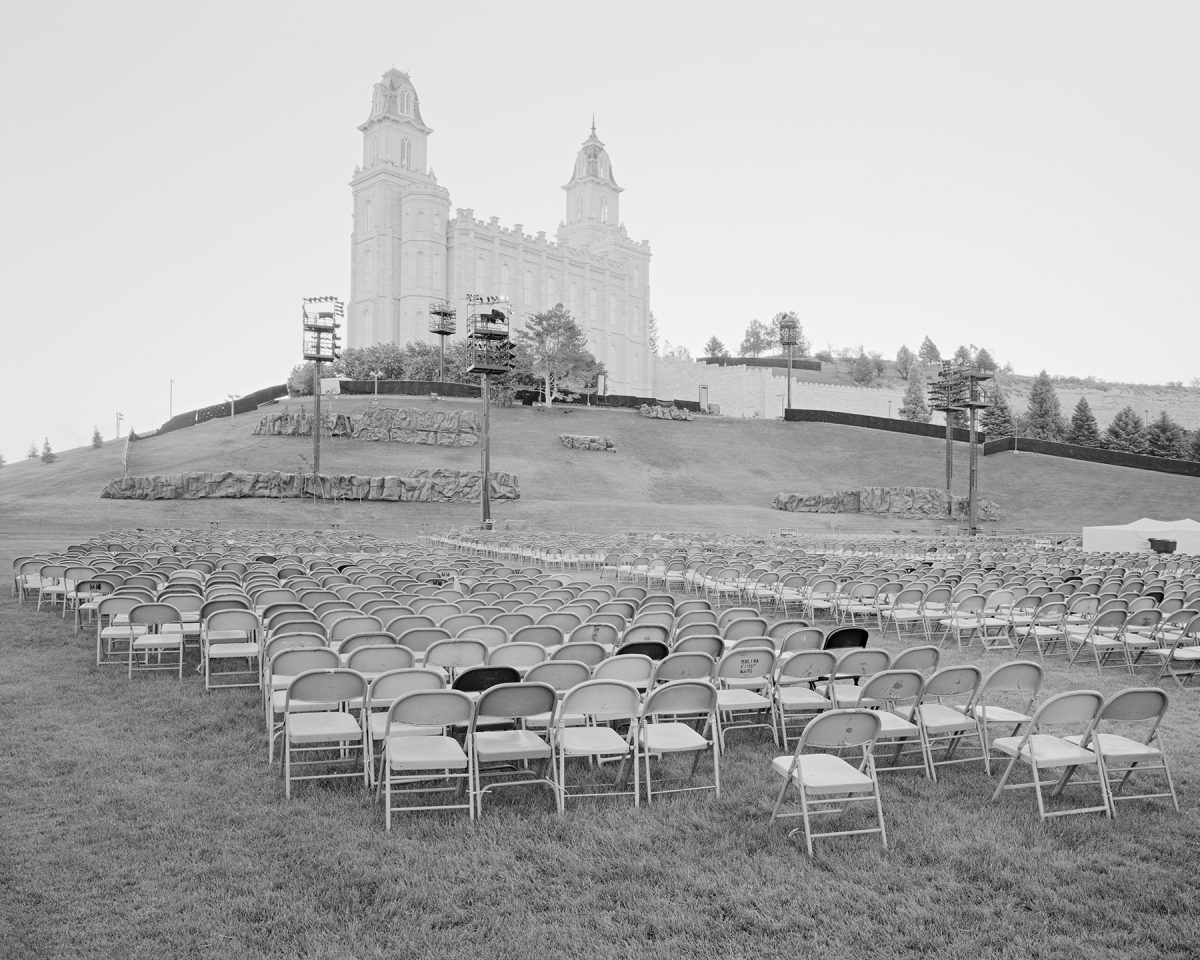 The images in God to Go West also suggest social and political commentary in their incongruencies. Geographic resonance likely inspired Brigham Young to choose the name of Manti for one of his first settlements outside the Salt Lake valley. The original, mentioned in the Book of Mormon, is associated with a prominent hill, not unlike the hill in Sanpete County where the LDS temple now sits. George’s image captures that temple on the hill, shrouded in mist, as it looks over a field filled with folding chairs — a reference to the Manti Miracle Pageant. The open-air dramatic event, staged by amateur performers and attracting thousands in the summer, combines scenes from the early history of the Restoration movement begun by Joseph Smith and ones described in the founding scripture of that movement, the Book of Mormon. A local initiative rather than one directed by church headquarters, the pageant is closely associated with the town and was performed for half a century before it was discontinued earlier this year at the suggestion of current LDS Church president Russell Nelson. The effect on the local community and economy is yet unknown.

To represent nearby Ephraim, the college town named for one of the sons of the biblical Joseph (of the colorful coat), George chose a small monument erected in the town’s Memorial Park. In the stacked arrangement of a hand-carved totem pole, it depicts a woman in traditional Scandinavian dress, a Native American in ceremonial headdress and a bald eagle. It was likely a well-meaning tribute to the people who helped establish the area, as Ephraim, which came to be dominated by Danes and Norwegians, butted up against a Native American settlement. That hybridity never went too far, however. The town today features a Scandinavian festival and surnames like Olsen and Christiansen dominate, but Chief Walkara’s people were long ago removed to reservations in the eastern part of the state. 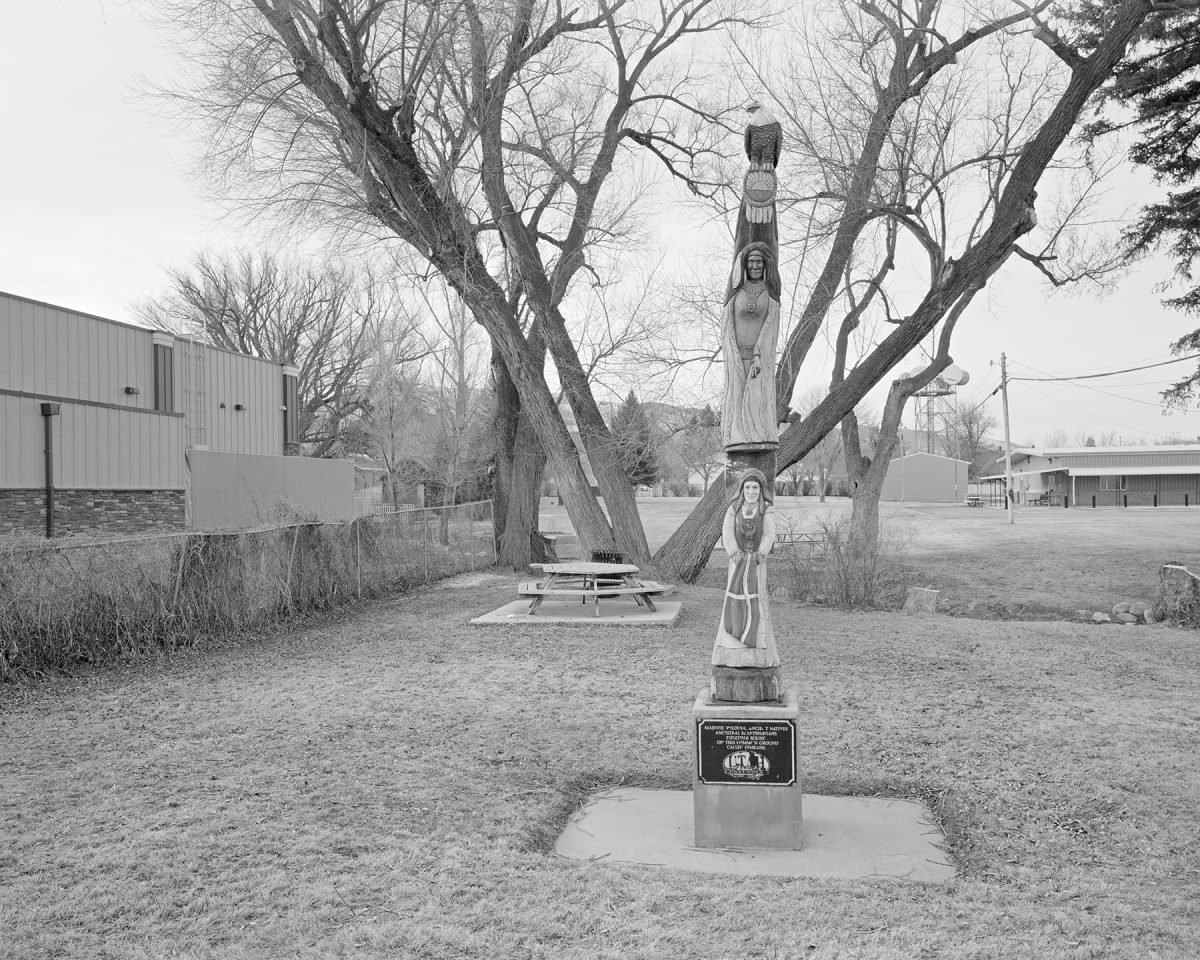 While Dry Creek may have been a geographically accurate name for a town, it was never a very promising nor original one. Evansville, the name that succeeded it (in honor of the local LDS bishop), was not much better. So, when the Utah County hamlet was officially incorporated in 1852, the residents chose a name that would not soon be forgotten (if not always pronounced correctly) — Lehi. Named for the patriarch of the Book of Mormon peoples (pronounced “lee-high”), the small town remained a farming community for more than a century, but in the last couple of decades, it has swelled in size as it has become home to the growing tech industry known as Silicon Slopes. George’s photograph “Lehi, UT,” shows neither farm fields nor tech offices, however, but a dinosaur. Or, rather, its representation on the side of a building, where a T-rex advertises The Museum of Ancient Life. It’s part of Thanksgiving Point, the large museum and event complex created by Alan Ashton, founder of WordPerfect and grandson of an LDS prophet, that has been expanding for decades on the north of town. The photograph also features a stop sign, below and to the right of the T-rex. Whether that detail should be read as incidental, or as an important interpretive clue, is ambiguous; but just in case those unfamiliar with the Book of Mormon might be wondering, the prophet Lehi makes no mention of dinosaurs (The LDS Church has no official position on dinosaurs, either, or their place in the creation story, though individual members have some interesting ways of explaining the existence of their fossils.)

Enoch, an antediluvian patriarch, is mentioned only briefly in the Old Testament but receives a considerably longer gloss in Mormon scripture, where we learn he created such a model society that he, along with his entire city, known as Zion, was caught up into heaven. In George’s photograph of Enoch, Utah, there are no people, but a few parked cars in the distance and a large riding lawn mower in the middle of a well-kept lawn suggest their presence. They also suggest what has come to exemplify for suburban America a conception of the perfect, heavenly community — cars in the driveway, meticulous green lawns. A type of “unavoidable incongruity” George talks about between place and name becomes evident when one learns that Enoch, a small town north of Cedar City, receives only 13 inches of rain a year, a third of the national average. It needs to be caught up to heaven soon, before the water runs out and those lawns dry up. 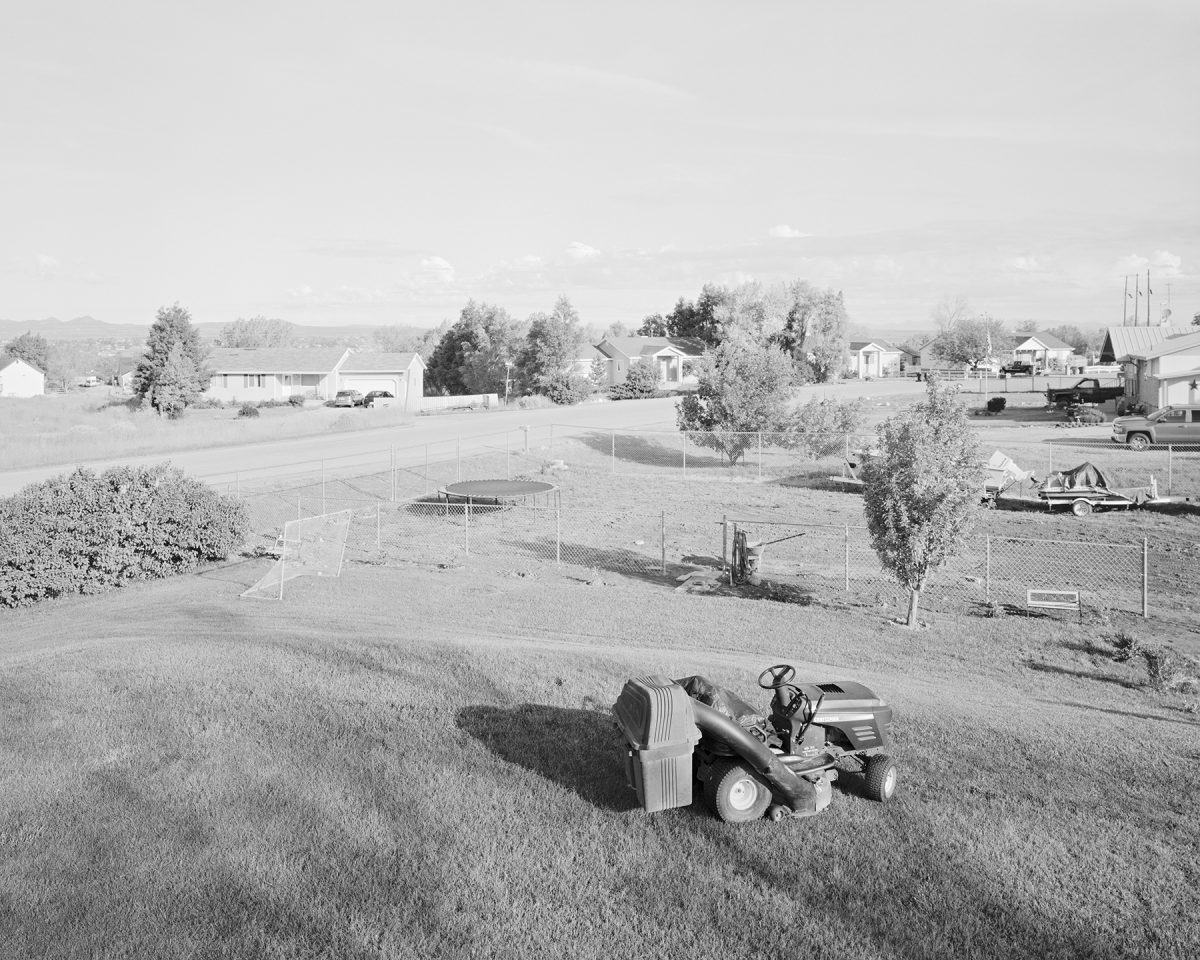