Daniel Everett at the UMFA 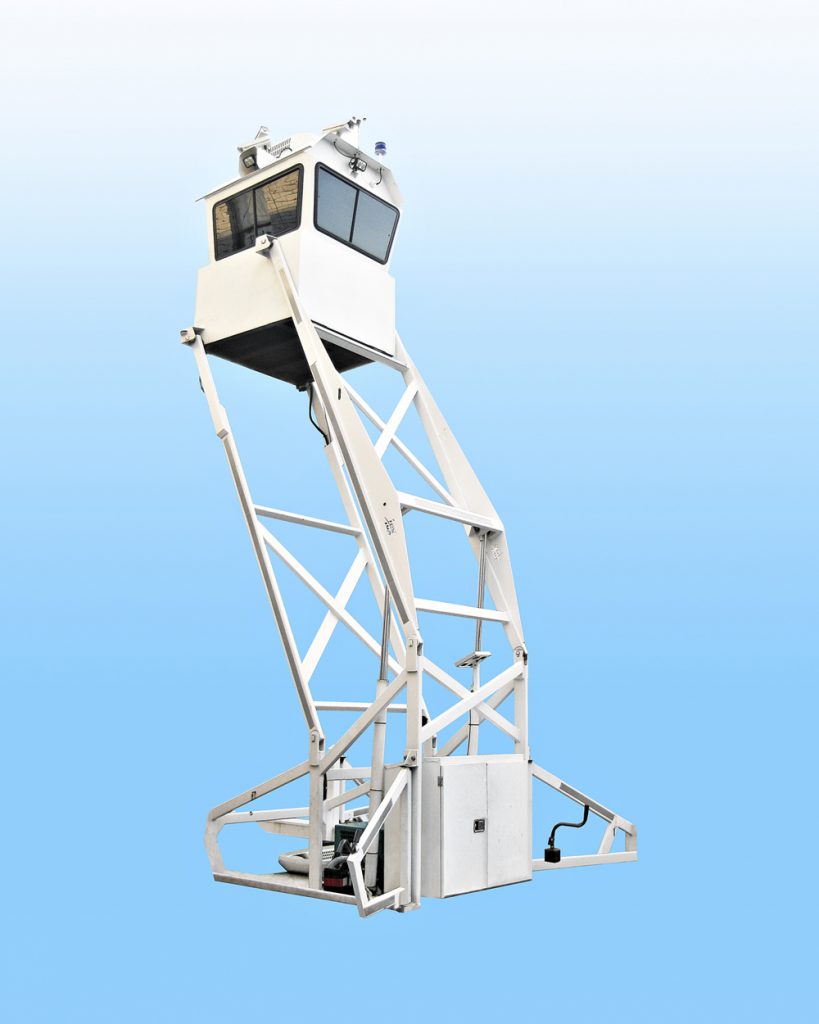 Travel should change your vision. So should an art exhibit. When the two combine, well . . . life is good. I recently spent time in Cyprus, a trip that serendipitously served as a fruitful primer for the Daniel Everett exhibit now up at the UMFA.

Cyprus is a 3500 square-mile island in the eastern Mediterranean, south of Turkey and west of Syria. It has seen thousands of years of conquest and occupation, each civilization leaving its mark on the island. During our recent trip, a kind host showed us marvelous examples of Greco-Roman mosaics in ancient cities with magnificent views of the sea, beautiful sandstone cathedrals erected by Italian traders, and a vertiginous crusader fortress built on the top of a craggy peak. But the visuals that stuck equally in my mind, and prepared me to better appreciate Everett’s work, were of architecture from the past thirty years. 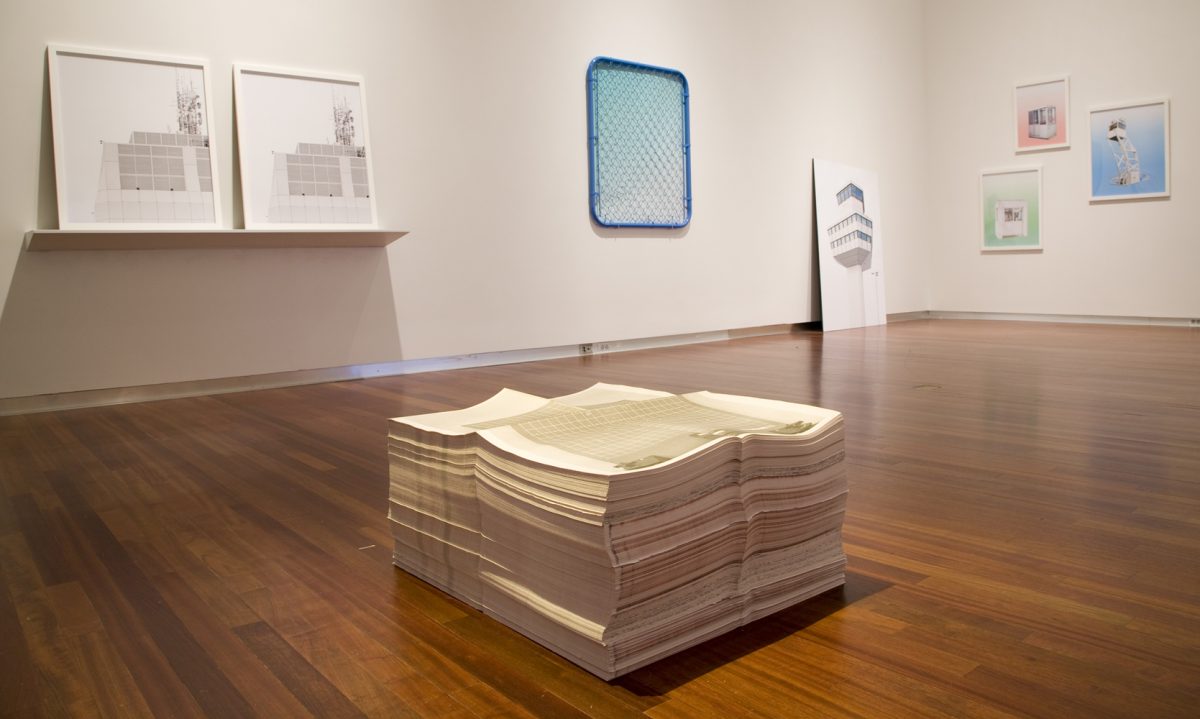 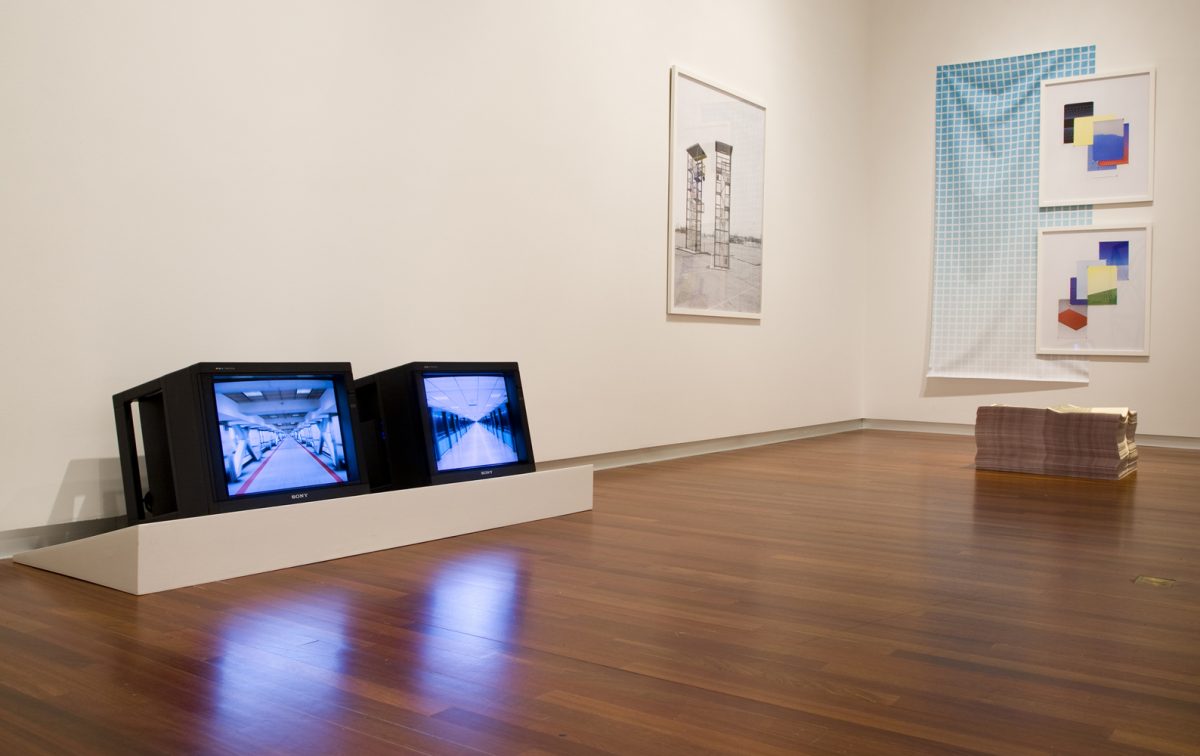 Everett is a young professor of art at Brigham Young University. His work (principally photography, but also video and installation) frames the type of anonymous, mundane architecture that subtly designates liminal spaces. In his works, humans are visually absent, but the implication of the human is always present and charges the works with subtle but powerful connotations. The door of a chainlink fence, hung on the wall like a painting, is more than just another example of a readymade: it is the symbol of delineated space, something that separates the public from the private, the child in the backyard from the dangers of the street, the mailman from the dog, one neighbor from another. His “Antenna I/Antenna II” appears to be identical, monochromatic photographs of radio towers perched atop a grid-facaded building. Closer inspection reveals that between the two shots a slight shift in perspective has occurred. The radio waves coming in and out of that tower are present but invisible, as is the viewer implied by the slight shift in perspective. ” Ascension III,” a video piece, is equally void of people, though it depicts an airport terminal through which thousands of travelers pass every day. The video consists of a few frames of a hallway at the Salt Lake airport, put on a continuous loop so that the hallway extends ad infinitum as a Kafkaesque taunt to any jet-lagged traveler who has trudged down anonymous corridors looking for passport control and baggage claim after a 20-hour journey. 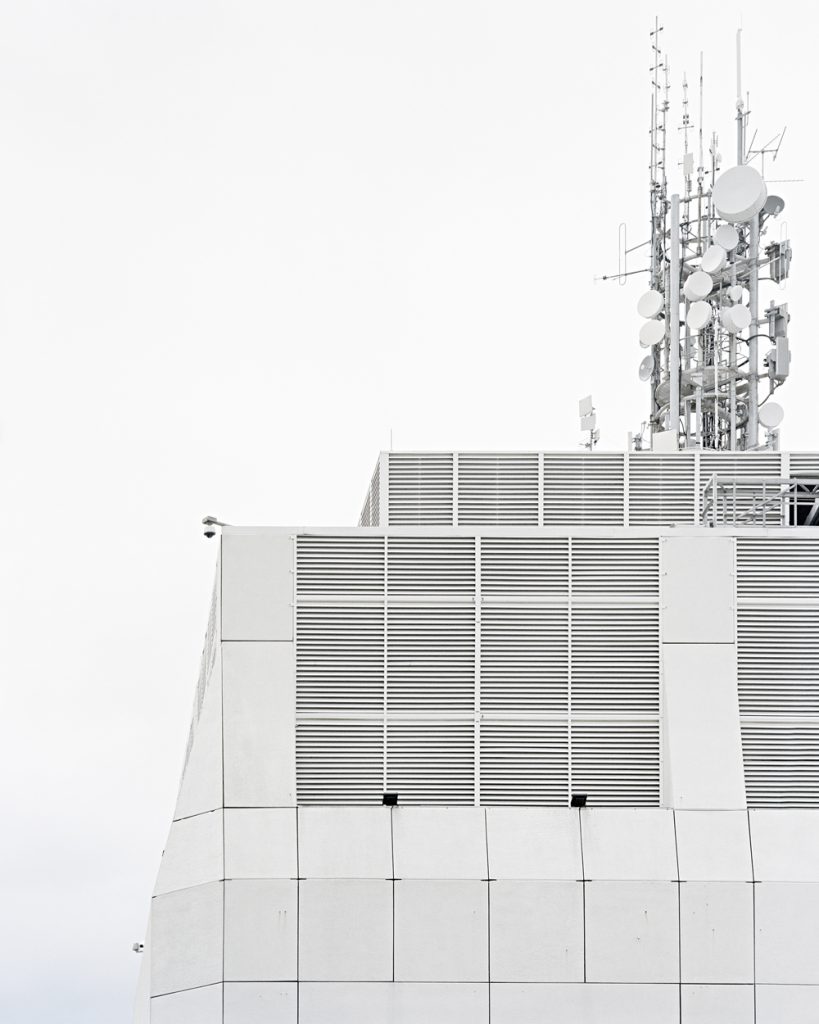 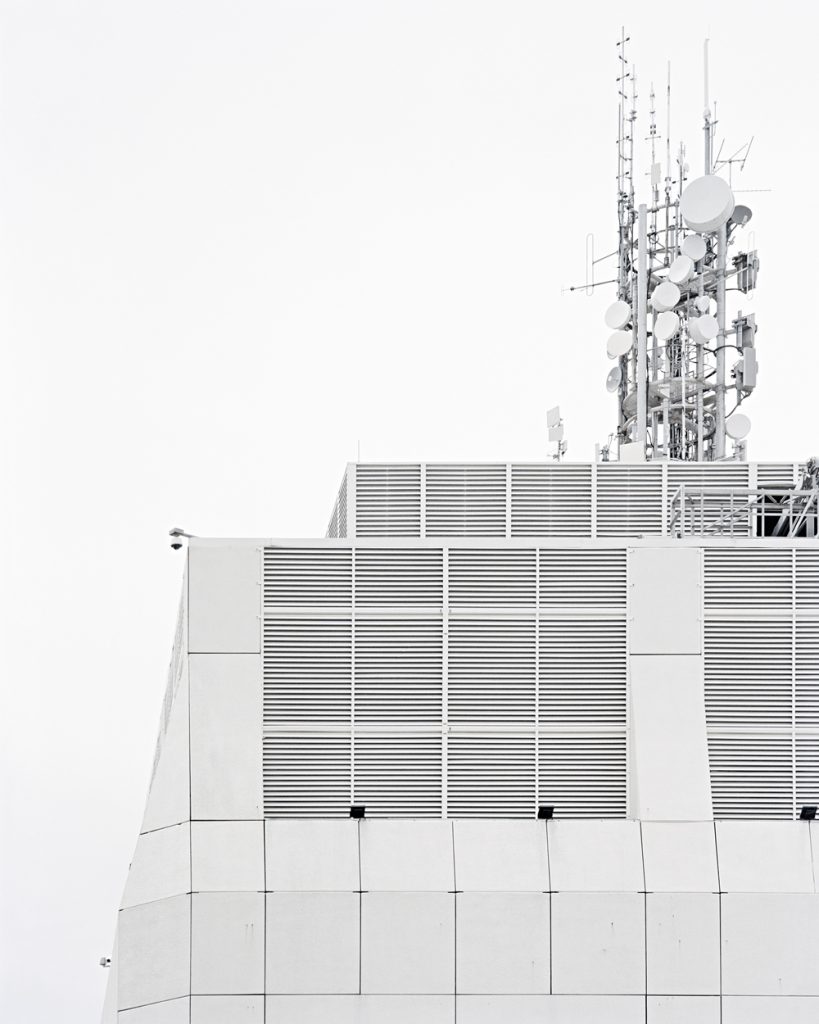 After the fall of the Ottoman Empire in the early 20th century, Cyprus briefly came under British control before finally achieving independence in 1960. The treaty that established the country insured the island, which has a majority Greek and minority Turk population, would not become part of greater Greece. When a decade later the majority Greeks pushed for unification, Turkey, one of the treaty’s guarantors, invaded the north. Greek Cypriots fled to the south, and the Turk populations from those areas were pushed north, so that what were formerly mixed villages, anchored by both churches and mosques, soon became ethnically homogeneous municipalities. A border — a United Nations buffer zone known as The Green Line — now separates the island.

Southern Cyprus never joined Greece, but it has since become part of the European Union. By contrast, the Turkish Republic of Northern Cyprus is a political entity recognized only by Turkey. The economic disparity is evident to anyone who crosses from one side to the other. Traveling across the north’s Massaoria plain, I was struck by two architectural features. One was the habit of the Cypriots to build modest, one-floor cement houses, with rods of rebar sticking up through the flat roofs – anticipation of the second story that will come with better times. This modest approach may have been learned from the other architectural feature that caught my eye. The flatlands of this fairly mountainous island are spotted with the empty shells of half-finished buildings, wind blowing through one example after another of two floors of poured concrete joined by a lonely concrete stairwell. 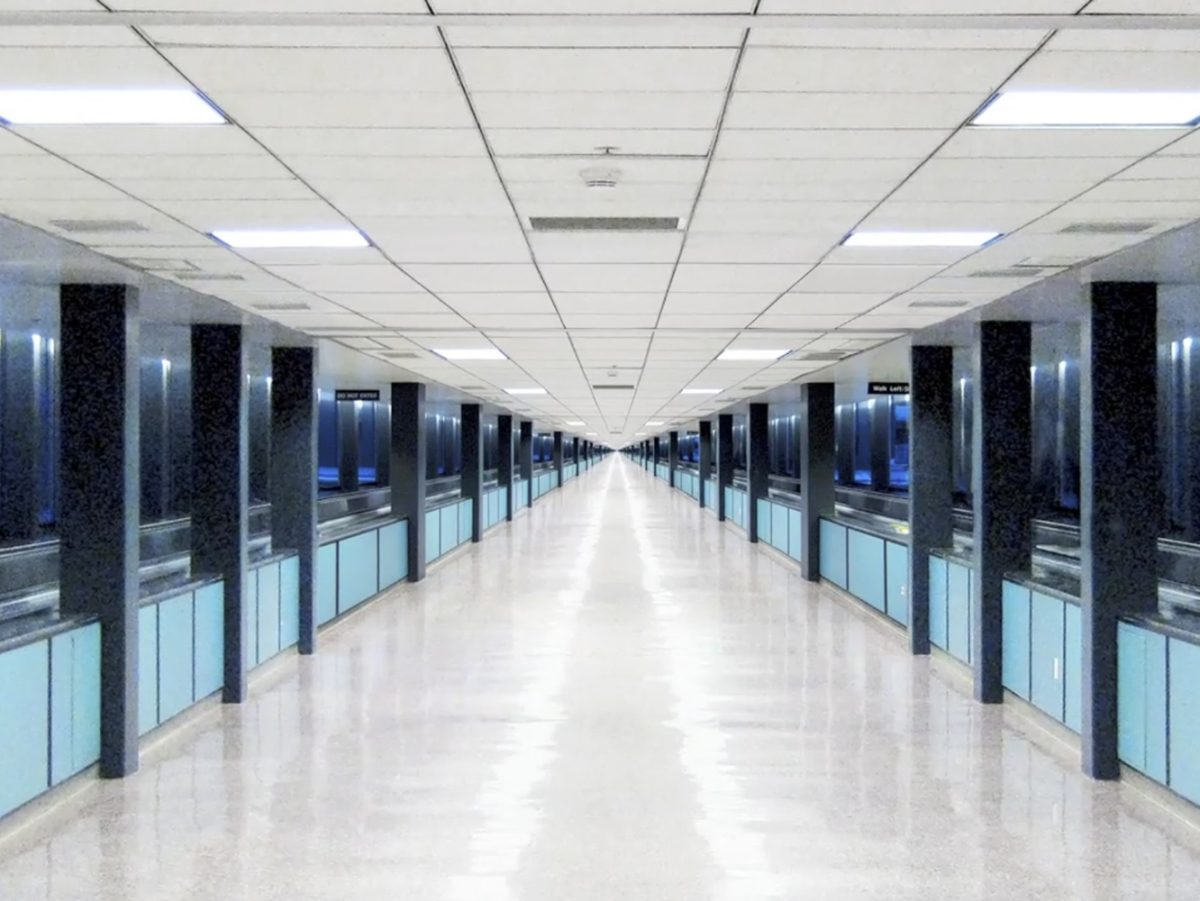 These “buildings” came to mind when I saw Everett’s “Tower II,” a seemingly absurdist photograph of a parking lot that is home to two glass-encased stairwells to nowhere. In her exhibition catalogue curator Jill Dawsey gives the game away when she explains that the tower in the photograph does have a use – the leader of the BYU marching band climbs up there during rehearsals. In the photograph, though, Everett duplicates the building, emphasizing the absurd mystery of a seemingly out-of-place edifice. The stairwell is a central element in architecture, joining — rather than dividing — one space to another. A stairwell to nothing, then, is a particularly melancholy sight.

Everett’s interest in the ambiguity of architecture is evidenced by other pieces in the exhibition, most prominently a set of three photographs entitled “Monument I,” “Monument II” and “Monument III.” Each photograph features a simple piece of banal architecture. Small, white, windowed boxes, these are the type of portable, covered buildings that serve as checkpoints and security booths. In our country they might readily call to mind the entrance to a construction site or a security booth at a parking lot. For a Cypriot the connotations would be more powerful. And more personal. 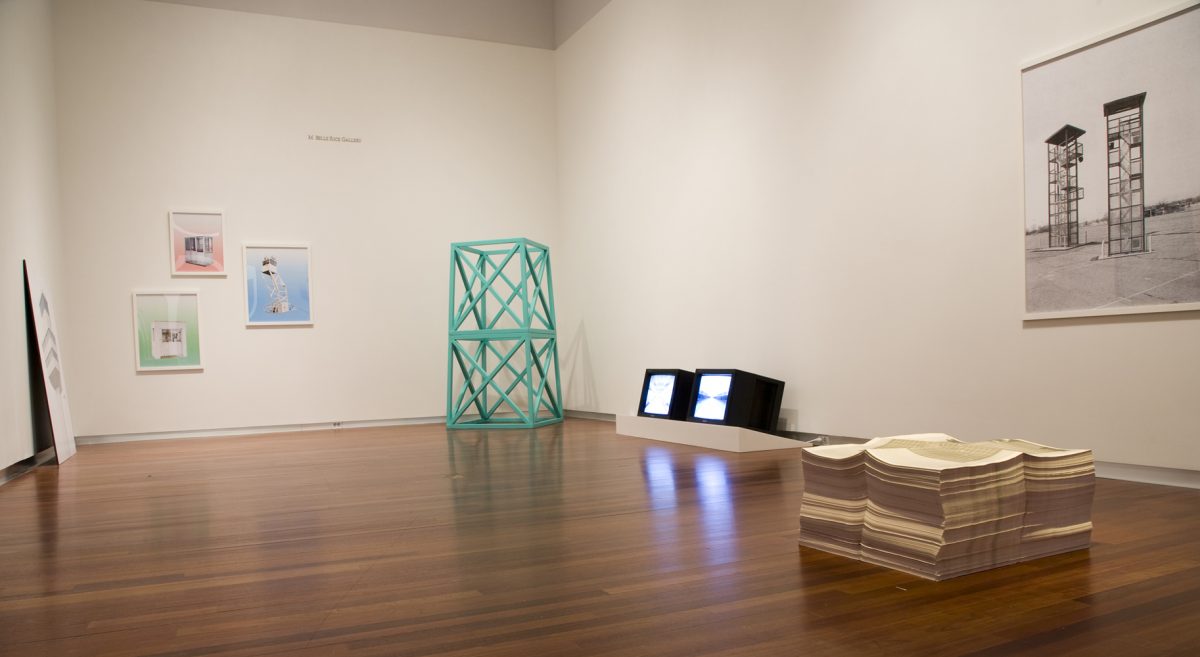 Armed guard stations, barbed wire and ghost towns still mark Cyprus’s Green Line, but since 2003 the border has been “open,” allowing vehicle and foot traffic to pass through the 112-mile border’s seven crossing points. For a tourist, passing the borders can be a minor inconvenience. At stations that look very much like Everett’s “Monument I,” you must show your passport. You must also have Euros for the south and Turkish Lira for the north, and passing the border you have to pay a duty on any items worth more than $200 (though this is circumvented by shopowners who will provide you with a fake receipt for any high ticket items). For the Cypriots, though, that demarcation of space represented by the small white shack can be anything but easy. 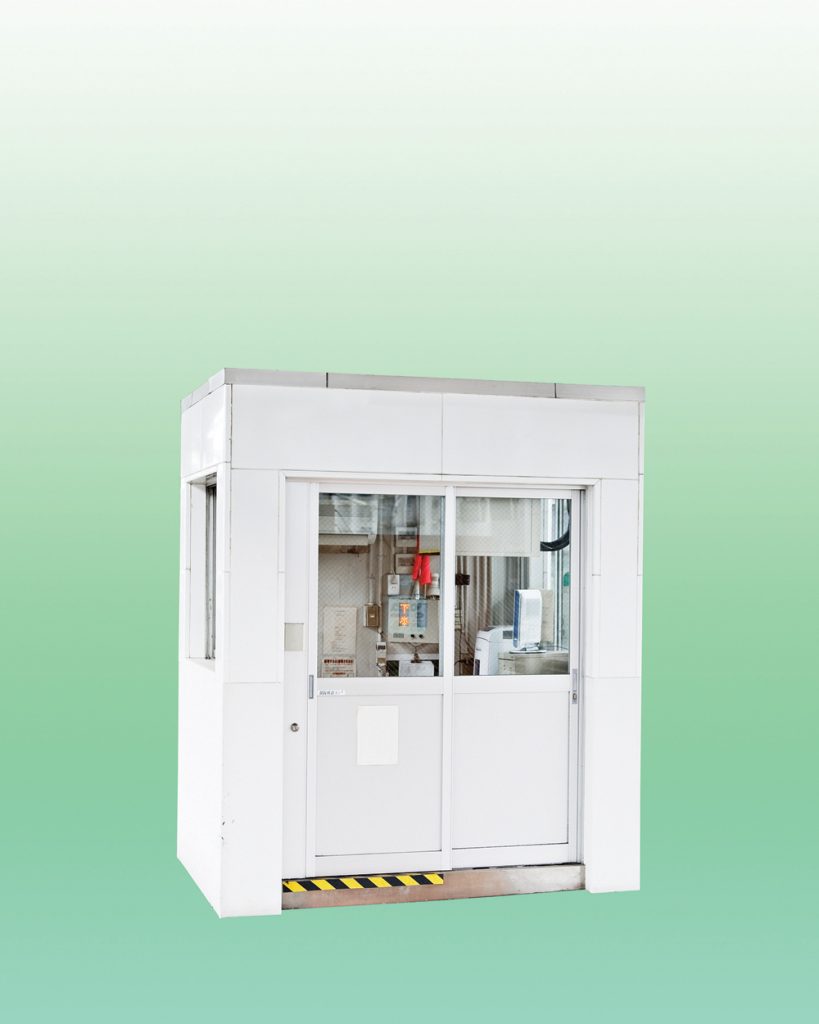 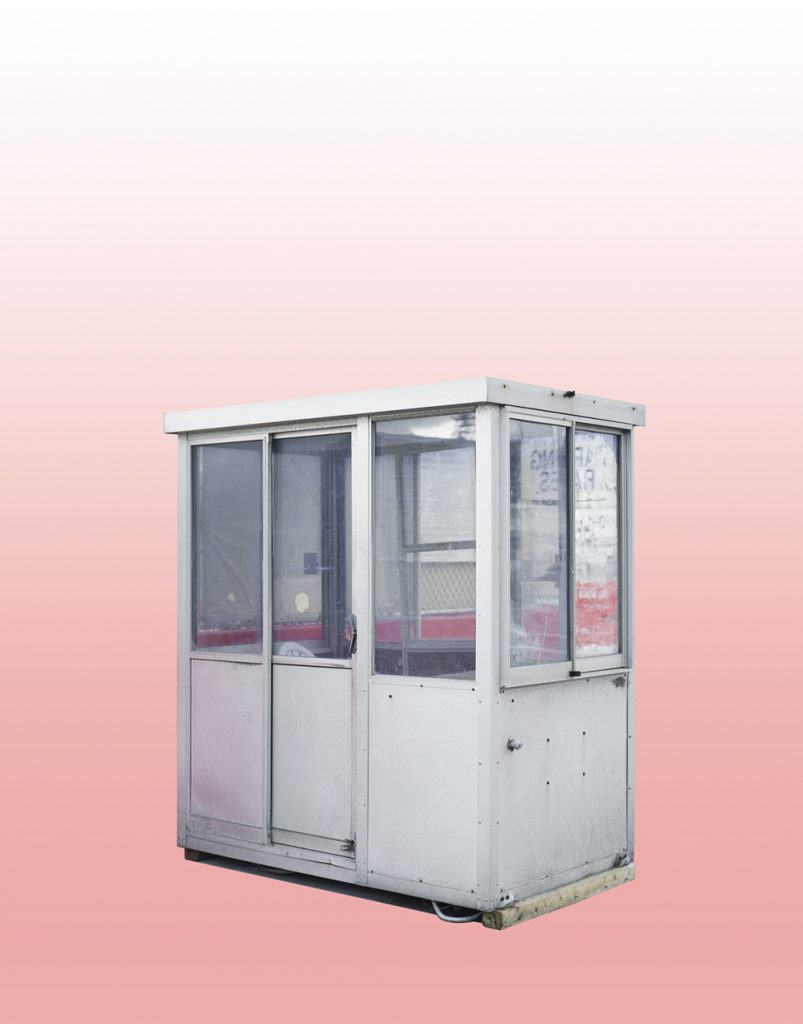 One example. A Danish woman who has been in Cyprus for fifteen years lives within a mile of Famagusta, an enchanting city surrounded by a medieval wall, dotted with old churches and home to a number of fine restaurants. But because she is married to a Greek Cypriot, and because Famagusta lies just north of the Green Line, she has been only once. On that trip her husband visited his childhood home. Though the Turk Cypriot family that has lived there since his family fled in 1974 was kind enough to give him the box they had kept full of items his family had left behind, he has never been back.

Of course our own country is not immune to troubles. As Jill Dawsey explains, the building in “Monument II,” which sits atop a crane, was photographed in Crown Heights, Brooklyn, a culturally mixed neighborhood that was home to a riot in the 1990s. At home or abroad, the small, anonymous buildings that appear in Everett’s work can symbolizes broad and deep human stories.

Everett’s images are powerful precisely because they show so little. Context can change everything. An observation tower can be used to view birds or control crowds. A radio tower can be used to blast the latest pop sensation. Or it can be used to communicate with invading fighter jets. A building like “Monument I” might make you feel safer parking your car in a large city, or it might remind you of the stolen birthright that lies only a mile across the border.