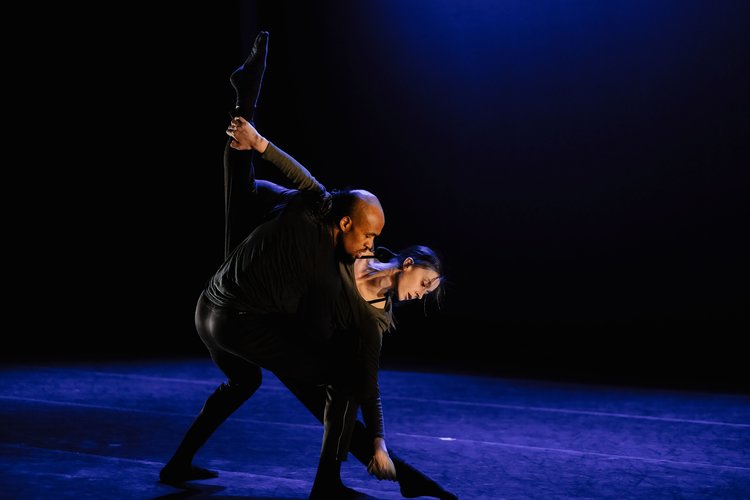 topography n. the physical or natural features of an object or entity and their structural relationships

The inaugural Dance West Fest combined workshops hosted individually in the past by Repertory Dance Theatre, Ririe-Woodbury Dance Company, and the University of Utah. The newly branded workshop culminated on Thursday night with Topography, an aptly titled program that featured a hybrid of dances in varying stages of completeness. The evening served as a preview, both of the upcoming local dance season as well as of work from outside the state, and provided an instructive side-by-side of pieces that would not share a program otherwise.

With no printed playbill, directors and choreographers personally introduced each dance and cast; the informality was a nice foil to an otherwise surprisingly polished presentation in the Rose Wagner Black Box, complete with lighting and (light) costumes. 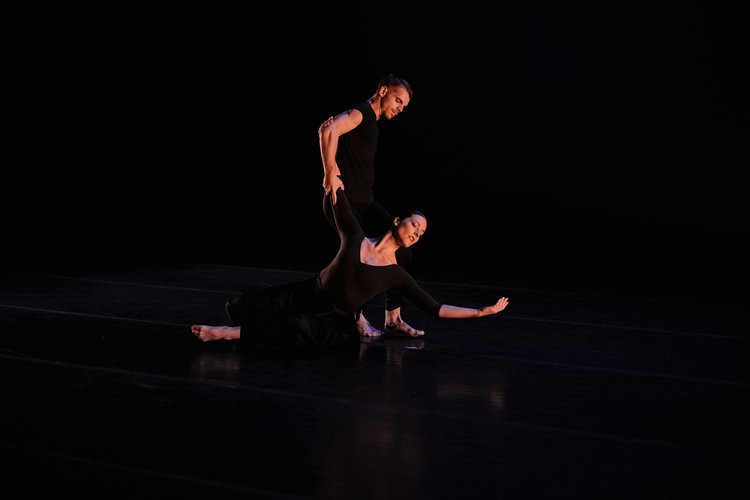 Difficult feats such as a series of tours en l’air, with bow-and-arrow arms, and suspended hinges to the ground appeared effortless, buoyed by the performers’ horizon-focused gaze. As Norman Lloyd’s piano score transitioned from effervescence to effort, so too, and seamlessly, did the relationships between dancers. Though “Invention” clocks in at just eleven well-paced minutes, the piece, as dance critic Kathryn Williams has written, “through form and music and shape and gesture, creates a world.“ 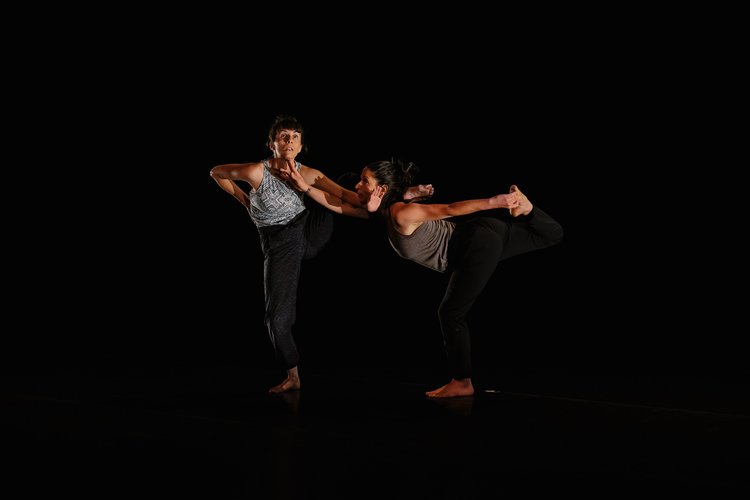 Molly Heller (left) and Arletta Anderson presenting the start of a new collaboration with Katie Faulkner. Photo by Tori Duhaime.

The fully-mined finality of an archival work was followed by an exploration of something brand new, as Ann Carlson introduced an onstage rehearsal featuring Ririe-Woodbury artistic director Daniel Charon. Carlson explained that, for her, the audience always completes a dance; this is evident in her 2017 work for Ririe-Woodbury, “Elizabeth, the dance,” which the company will restage this fall.

Charon tap-danced to “Moses Supposes” from “Singin’ in the Rain” and Carlson admitted she knows nothing about tap as she mimicked his movements while calling out directions, her hands fluttering behind her like quaking aspen leaves. Her coaching interjections, which functioned both for Charon and for us, made the case that, even here, the audience remained her final ingredient. 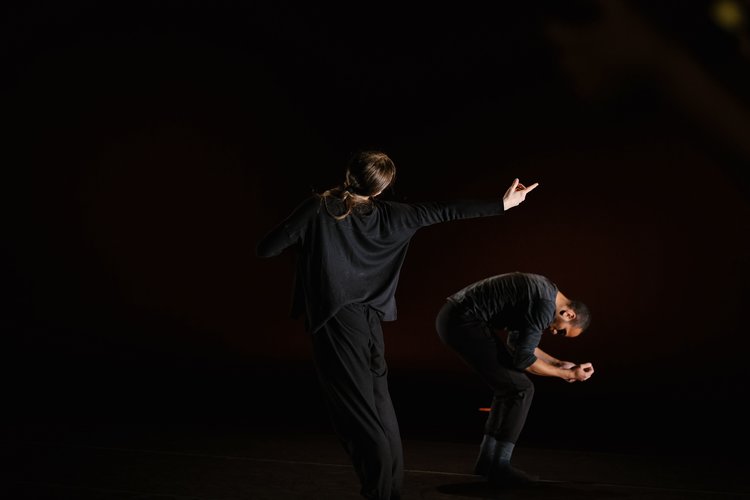 Bay Area choreographer Katie Faulkner presented a collaboration with Arletta Anderson and local artist Molly Heller. The three women live in different cities, and Faulkner introduced their piece, the beginning of an evening-length one (shown in front of an audience here for the first time), as an experiment in working across distance and time.

Performed by Heller and Anderson, the duet focused on percussion (audible, prancing pony steps, body slaps, and half-intelligible, breathy muttering) to create an abstracted narrative verging on the humorous. Like a contemporary art rendering of two Stooges, Heller and Anderson’s foibles (literally) pushed off and built upon one another, the two garnering laughs as they raced in circles around the stage, one clearly imagining herself the triumphant winner. 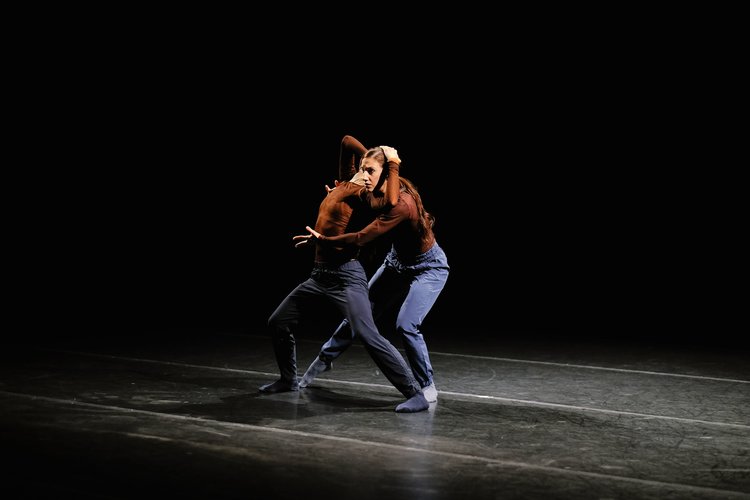 New York-based choreographer Dante Brown mined both poetry and personal life in his offering, performed by four students of the workshop, which he introduced as a “text to movement experience.” For the most part, any clarity was derived from the poetry read aloud by Brown at the front of the stage. The dancers began by moving in a rather amorphous blob and Brown’s relationship to them, as well as his choice to wear feathered wings, was not abundantly clear, lending the selection the air of a classroom exploration (in fairness, it was created in just several hours over the course of the workshop). But a solo by Rebecca Aneloski colored the space between performers and text beautifully, providing both heft and purpose.

Yin Yue, also based in New York, presented twice on the program; first, a duet performed with Grace Whitworth, who is rehearsal director for Yue’s YY Dance Company, and then, to close the program, an excerpt of a new commission for Ririe-Woodbury to premiere in April 2020.

Lights rose on “The Time Followed” (2019) on what appeared to be one figure — the soon-revealed duo of Yue and Whitworth continued the idea of a singular, eight-limbed body with responsive, intelligent, and close-quartered partnering. Each manipulated the other through challenging weight shares and elegant promenades, both remaining in simultaneous control throughout. The ending image had Yue and Whitworth facing each other, arms outstretched and hands slowly rising while moving closer together, like moths seeking the light.

The program-concluding excerpt of Yue’s Ririe-Woodbury commission gave an enticing glimpse of company newcomers Dominica Greene and Nicholas Jurica. Similarly task-oriented partnering once again emphasized movement itself as concept (if the chosen selection is any indication of the whole). The dancers of Ririe-Woodbury appeared freer to inject daring in their approach to Yue’s choreography, or perhaps their sense of abandon was a product of their bodies’ interpretation of a new language; either way, it was a rewarding expansion upon the previous, more carefully calculated, pas de deux. 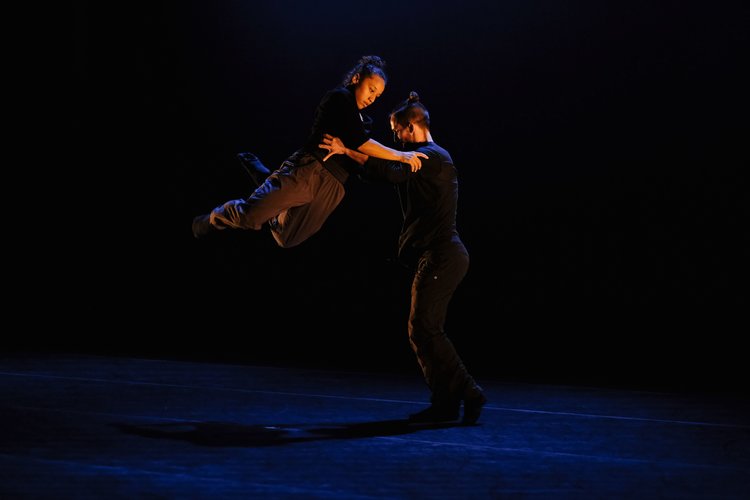