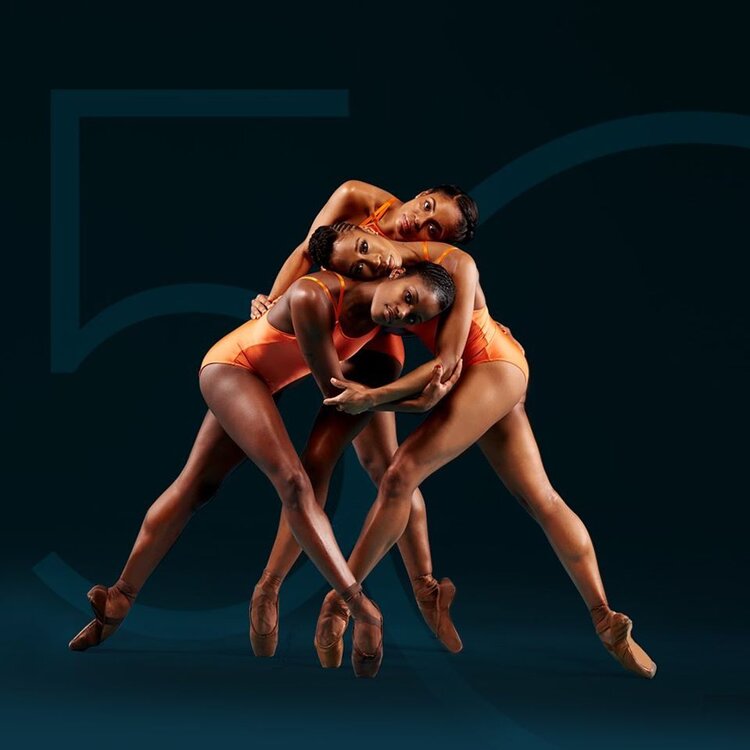 This year marks Dance Theatre of Harlem’s fiftieth anniversary. The company was founded by the inimitable New York City Ballet principal dancer Arthur Mitchell alongside ballet teacher Karel Shook at the height of the civil rights movement, in 1969, shortly after the death of Dr. Martin Luther King Jr.

Mitchell cultivated his own dream of creating a platform for Black ballet dancers in the New York City neighborhood of Harlem. That dream is still alive today, as seen in the affirming presence of a large company of people of color both excelling at and innovating within the Eurocentric art form of ballet, under the direction of those with a shared experience. This is not a white-run company that merely represents diversity in the form of a token person of color; Dance Theatre of Harlem (DTH) is both embodied and directed by a majority of people that may see themselves in each other.

This performance reflected upon the company’s 50-year life span to date, and additionally memorialized the life of Arthur Mitchell, who passed away last September at the age of 84. The bereft dancers did not appear to let the passing of their fearless leader dim their dancing; rather, they performed innovative choreography with sincere confidence and beauty.

Nothing compares to dancing in the processing of grief. I write this with the utmost respect for pillars of dance who have passed: I would rejoice (albeit with sadness) to experience only performances by those paying homage to the deceased for the rest of my life. It is so humbling to witness the transformation of complicated feelings into movement. In a way, I suppose most dances could be viewed through the lens of “The Body Keeps the Score”; the way in which bodies can remember teachers and ancestors whose bodies made and influenced them in a continuum of memory stored in bones.

It was an honor and a pleasure to see DTH in Ogden, Utah, of all places. The show began with the most classical piece of the night, “Orange,” which featured costumes and lighting to match the title, and was choreographed by Stanton Welch, the Australian artistic director of Houston Ballet. Although the piece was very traditional, there were delightfully unexpected outgrowths, such as the swift wobbling of heads while dancers bourréed across the stage. Here, their heads, normally instructed to “float above the body” as if nothing was happening down below, mirrored the movement of the feet, that carried on in a more classical way. This combination seemed to caricature the very act of ballet, as if the dancers were really bobblehead ballerinas. The bobble-headedness, however, was filled out by intricate duets, including a kiss on the cheek from a male to a female dancer that yet again made me think that the piece was playfully highlighting tropes of ballet through the abstract premise of the color orange.

The second piece, “Change,” channeled the past, with the dancers — Lindsey Donnell, Daphne Lee, and Ingrid Silva — “clothed in the legacy of their predecessors,” wearing leotards constructed as “a creative patchwork of tights worn by former dancers with Dance Theatre of Harlem.” The past was also channeled through the labyrinthine choreography by Dianne McIntyre, who was “inspired by women — Black, brown, and beige — who have refashioned the neighborhood, the country, the world, through their vision, courage, and endurance,” women she calls “warriors for change.” The dancers moved beautifully together, running in place, dangling their arms out as if their bodies were crucified, crouching down and mapping out points on the ground, and dancing with grace through it all. Each dancer performed a solo with movement that was sometimes shared by the piece at large. The choreography featured a variety of styles that were not just thrown in for the sake of contemporizing ballet; the styles referenced the women that the movement was inspired by with a depth of character and understanding. This piece had the reverence and gravity of a grand finale, which it could have been.

“This Bitter Earth” was performed by Crystal Serrano and Choong Hoon Lee and featured a poignant mashup of Max Richter’s minimalist composition “On the Nature of Daylight” and Dinah Washington’s soulful rendition of the titular song. Choreographer Christopher Wheeldon‘s robotic duet read impressively, as if the dancers were actually programmed to dance together and with no one else. It was romantic in a sleek and silvery way. Lee often ducked under Serrano’s outstretched arm or leg, even mid-rond de jambe. It was only at the very end that the dancers crumpled into each other’s arms while Lee carried Serrano offstage, swiftly, before too much of their human nature could be glimpsed.

Annabelle Lopez Ochoa choreographed the grand finale, “Balamouk,” that truly was grand, if not a bit disjointed stylistically as well as compositionally. The large cast of eleven dancers magnified gestural movement, crossing arms over chests and flicking hands out to the side, jumping up and out in close proximity; I could have watched this tight grouping of people do these moves indefinitely. However, the dance proceeded to expand outward from the tight clump and oscillated from upbeat music and choreography to ominous music with dancing done amid fog, then back to dancing exuberantly, then to a multi-minute sequence featuring one woman being lifted and pointing her finger out in front of her, that sequence culminating in a male dancer being pointed at by three female dancers. I was not sure what to make of this dance other than the stress I associate with “call-out culture,” as it went from a convivial tone in a group to a more accusatory mode of incisive, yet haphazard, pointing fingers.

Each duet throughout the performance was juxtaposed in my mind with the famous pas de deux from George Balanchine’s “Agon,” which Arthur Mitchell famously performed with Diana Adams in 1957. The intensity of that duet, featuring a Black man and a white woman, was not unnoticed during a time when white supremacy was often enacted in the form of lynching and other more “grassroots” atrocities fueled by Jim Crow policies. I compare this past brutality to a slightly different yet still institutionalized form of white supremacy that exists today, where Jim Crow policies may be flagrantly masked as a war on drugs or terrorism or “cleaning up the streets,” and “grassroots” white supremacists are just as violent as those in the past, further emboldened by White House leadership.

Mitchell stated that “Agon” was an exploration of “my skin color against hers,” and I would wager that it was also an act of extreme bravery on Mitchell’s part. The duet was performed just two years after Emmett Till was brutally murdered for having a forgettable interaction with a white woman, which was spun as a violation of how Black men were “supposed to” interact with white women. At the time, this kind of tragedy was not uncommon; parallels must also be drawn to how justice plays out, or doesn’t, today.

It seems like it could be both culturally and personally healing for the dancers of DTH to perform duets as themselves, or as living beings, in addition to being representations of Black and white people in conflict. There is more to existence than that conflict, though, and these dancers seem to celebrate that fact in their practice. In his time, Arthur Mitchell was both the first African-American dancer in a major ballet company (New York City Ballet) as well as the first African-American principal dancer. His work, that not only made room for people of color in ballet but vindicated and innovated the art form, is continued by the current artists of Dance Theatre of Harlem. The company will continue to carry on, and will change, just as this program’s piece by that name did so powerfully.